Until today, I have always claimed that I don’t do or like cruises. This morning I had an aha moment when I realized that cruise can take many forms. This weekend for example, I cruised in my 2002 Prius along a couple of freeways to an LA. dining destination: Bavel restaurant, downtown. 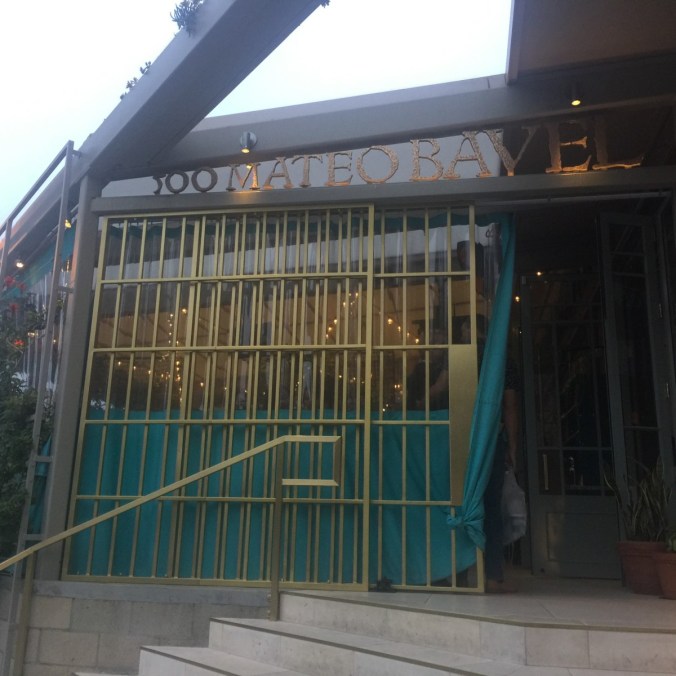 My partner and I did not have reservations so had to arrive early in order to get a walk-in seat at the bar. Several others had the same plan, but we were at the head of the line. Over the years we have had many a famous meal at a fully reserved restaurant by lining up early for the bar. It has been my experience that the early line is a great place to meet foodies and to get some of the latest news on top dining spots. Saturday night being no  exception I exchanged great info with the woman behind me on  places from North Hollywood to San Diego! Not only did I get some valuable info, it made the  twenty five minute wait in the unusually cool LA weather seem but a moment. Standing in line also gave us an opportunity to view and listen to the pre-opening rituals, chants and enthusiasm of the dining staff – rather like pre-opening entertainment although I knew it came from the most sacred of intentions!

Finally, we were escorted to the bar. I asked for other stools than the ones to which we had been guided and was granted my choice. The original was next to the passageway for servers, etc. I did not want to have the energy of the comings and goings be a distraction to my dining experience. (A piece of advice: always ask for a seat that fulfills your need be it ever so subtle. It makes for a more satisfactory meal).  As I settled into the bar stool I gazed over to my right at the kitchen where an amazing line of happy cooks were deep into preparations. 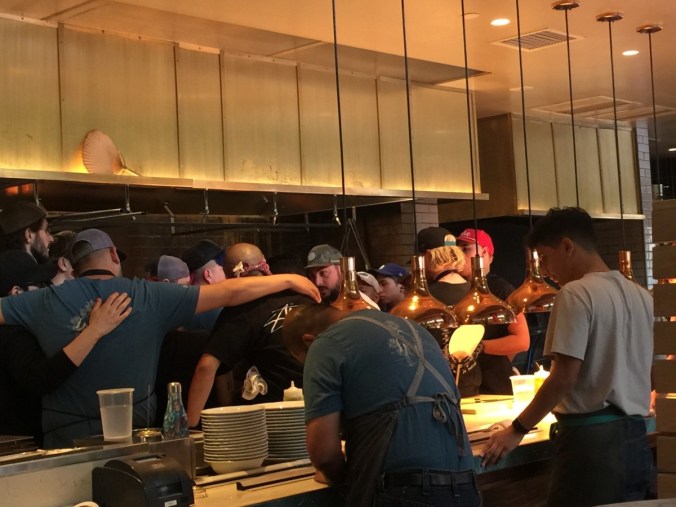 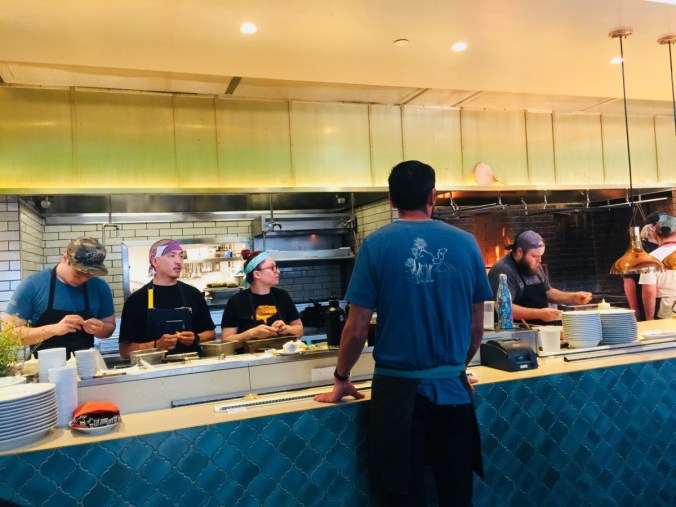 And while I was surveying the scene I heard someone say, “Jim and Penelope.” I assumed that someone was sitting next to my partner that knew us. I was wrong. I turned my attention back to the bar to see Aidan, the bartender looking at us with a big smile on his face. I could hardly believe my karma!

It had been nearly ten years since I had seen Aidan. In the past he had been the bartender at one of our favorite go-tos in San Francisco: A16. He had gone on to work in New Zealand, followed by years of managing, studying, and everything else that goes into becoming a great mixologist. Here he was, standing before me as the bar manager at Bavel, one of LA’s new greats! Thank goodness we had arrived so early. The restaurant was still a bit quiet, and that quiet gave us a few moments to catch up with one of our favorite bartenders! He poured a taste of Karanika, a Greek sparkling wine, with we toasted each other and enjoyed the reunion. 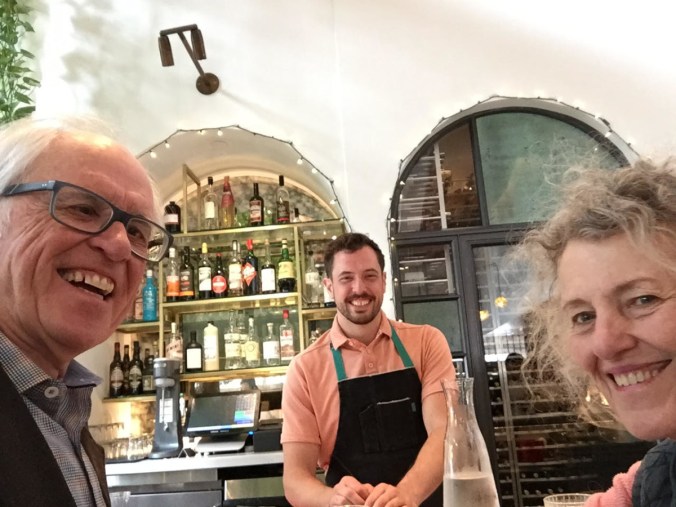 So this was our second time to dine at Bavel. Prior to our first dinner we had also dined at the owner chef’s other hot spot: Bestia. While Bestia does it good, as many of you know, while I am a flexible vegan, I don’t do meat or fowl. Bestia does well with both, but that’s for carnivores. Bavel was opened because the chefs wanted to do a restaurant that served food from their own lineage: Middle Eastern with roots in Israel, Morocco, Turkey and Egypt. I knew that with those roots, there would be plenty of dishes on the menu suited for vegetarians. My assumption proved correct.

After conversing with Aidan, we spent some serious time poring over our choices. Deciding on four items, we ordered the following (and I copy this right off the menu): 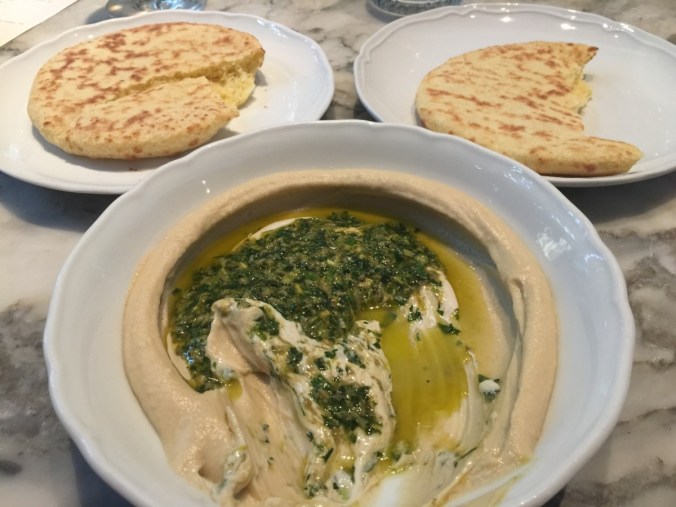 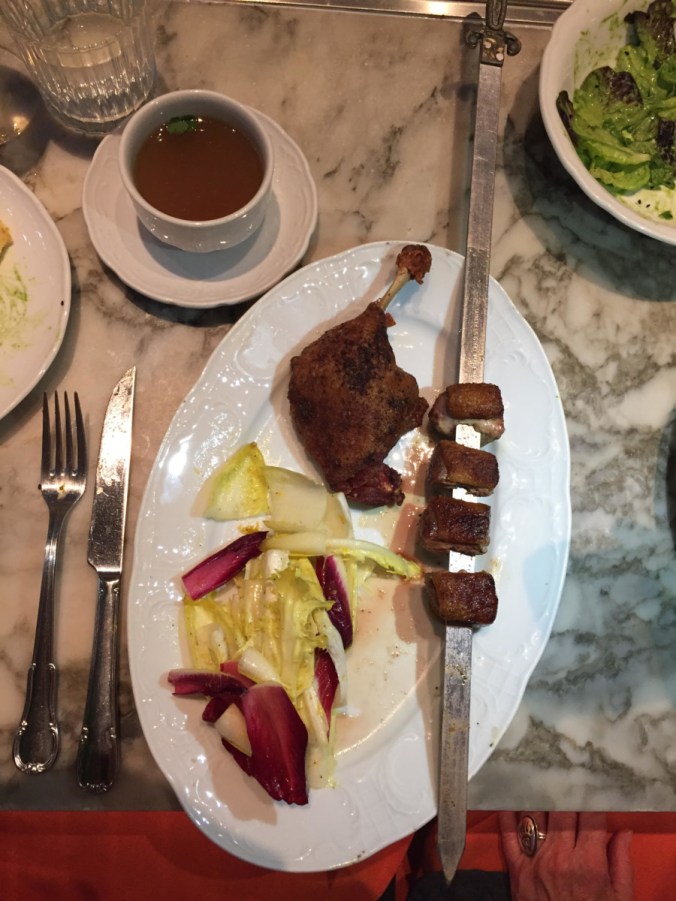 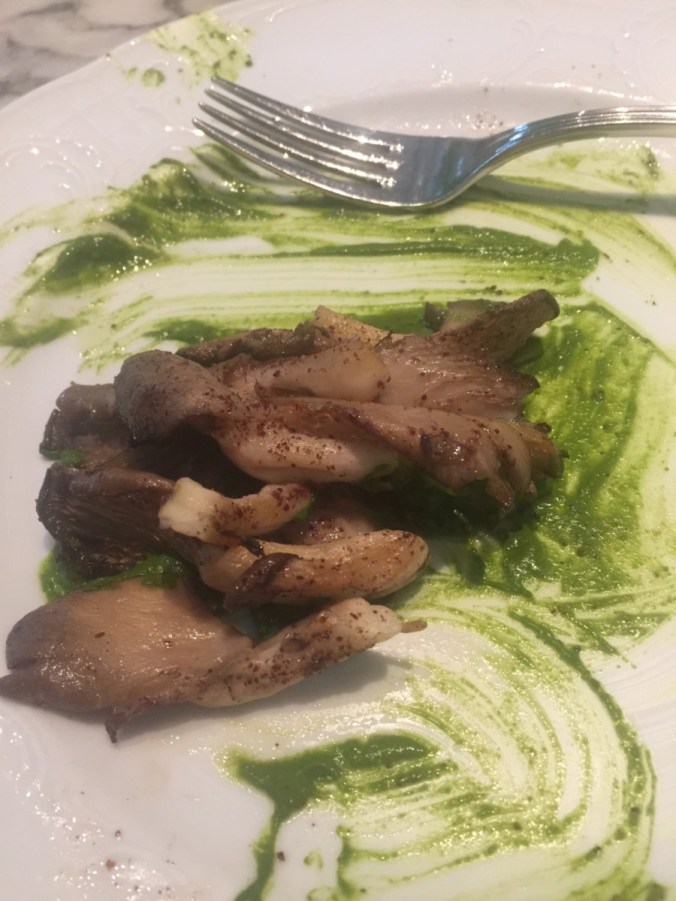 The full menu can view through the following link:
https://baveldtla.com/menu/
The first meal was so good, I had to go for a second. The hummus alone accompanied by soft, silken pita had been enough to draw me back again. As we placed our order, I heard a friendly voice welcoming us back from behind. I turned to see Brett, the sommelier smiling at us. 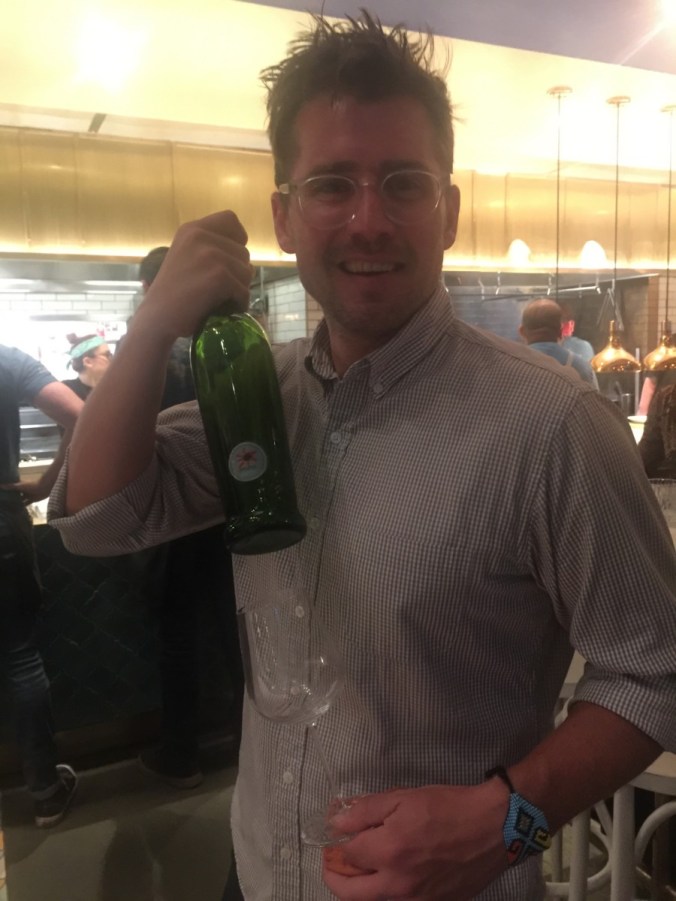 Remembering how impressed I had been with Brett’s wine knowledge on our first visit, I was eager to hear his thoughts on what would be appropriate for our order. I was intrigued by a  white dry wine Thrapsathiri from Crete, What did he think? He assured me that it would go well with what we had chosen. In addition, he suggested a vermentino with substantial skin contact from California to go with my partners duck.  Come on, I thought. I want my vermentinos to come from Sardinia. The California Ryme vermentino as well as the wine from Crete proved to be perfect accompaniments to our meal. And now I am a fan of the latter. 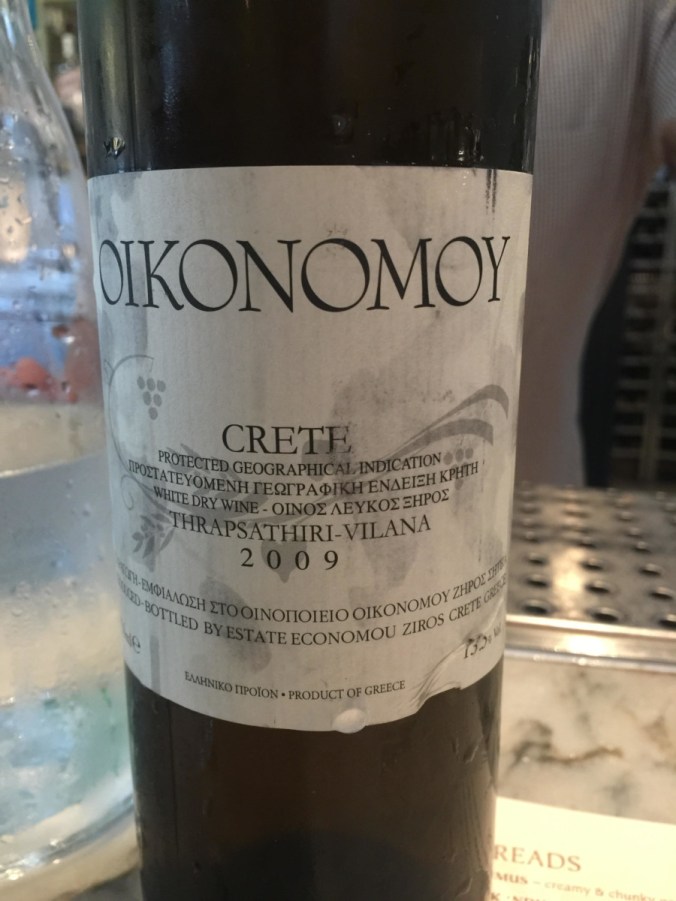 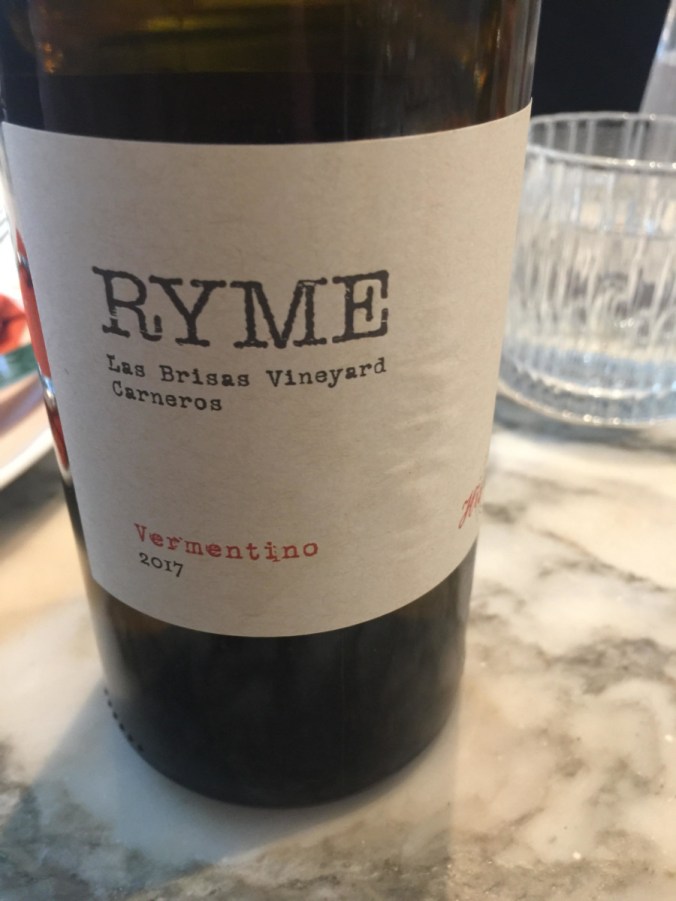 As for the meal, sometimes a second can disappoint, but not Bavel, it stood the test. Again, the hummus surpassed any other. The oyster mushrooms expertly prepared  could have satisfied a carnivore’s need for a tender, moist steak. I cannot recall ever having such a  taste-fulfilling mushroom dish – a kebab, no less
I am ready for a third! 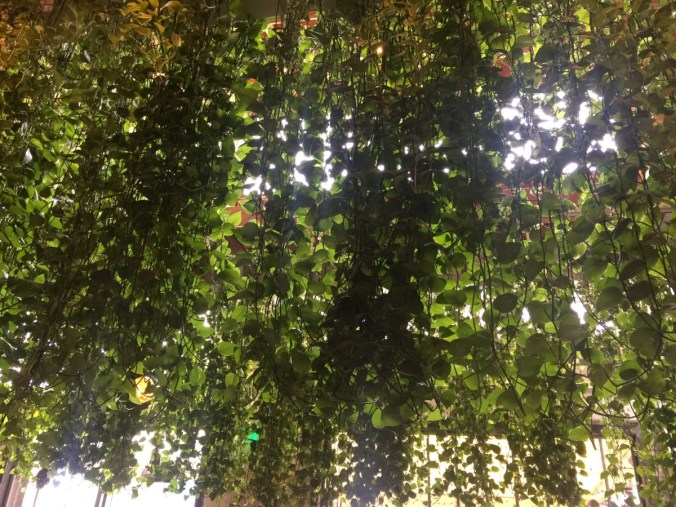 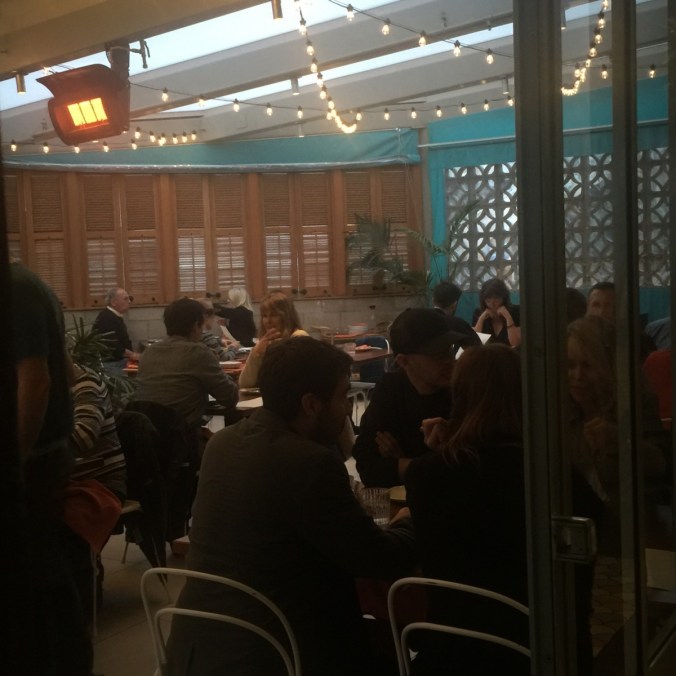 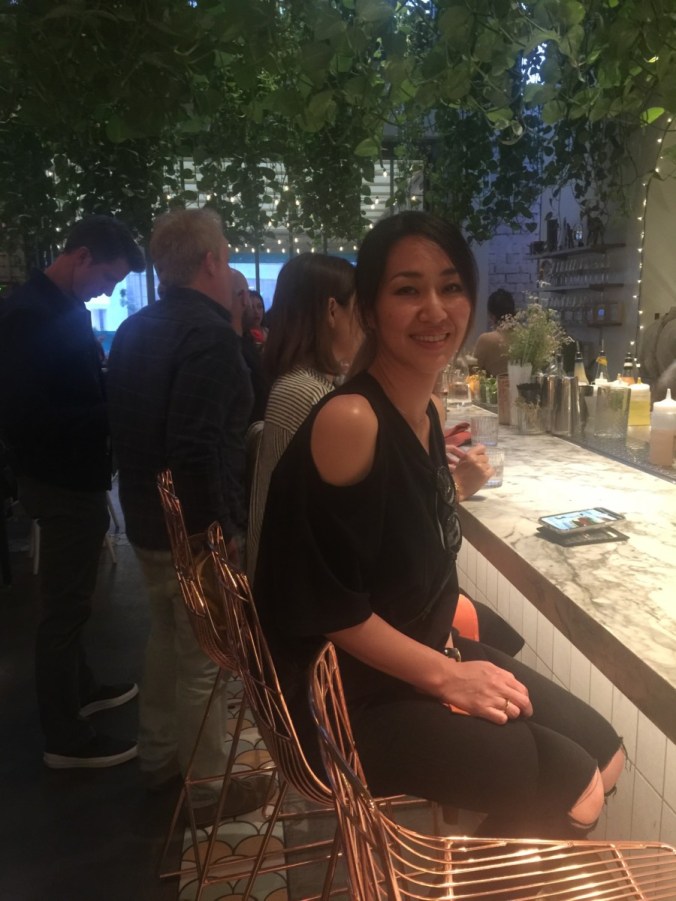 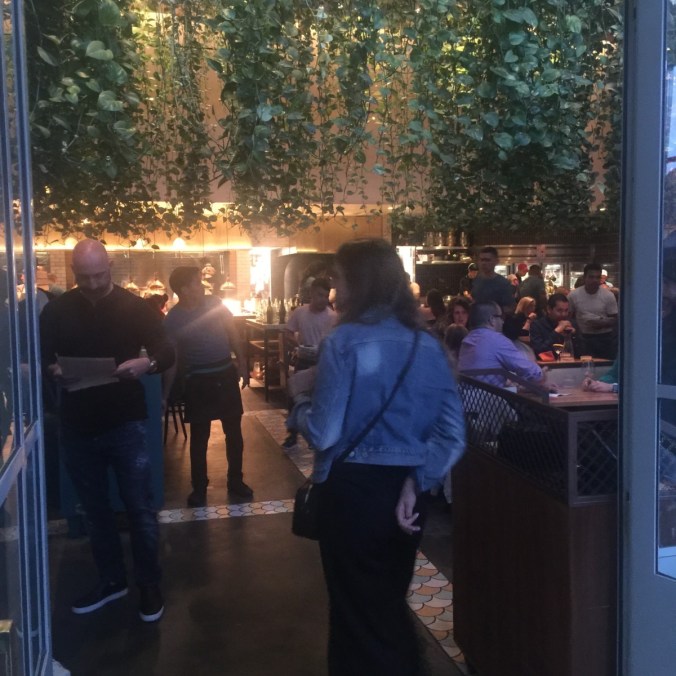