It was Saturday, my second and last day in Wuhan. We decided to forgo the breakfast buffet at the hotel and head for Starbucks, but first I took advantage of what was an unusually clear and sunny day,  to snap a shot from our hotel window. When done, we left the room and headed out for a morning walk. 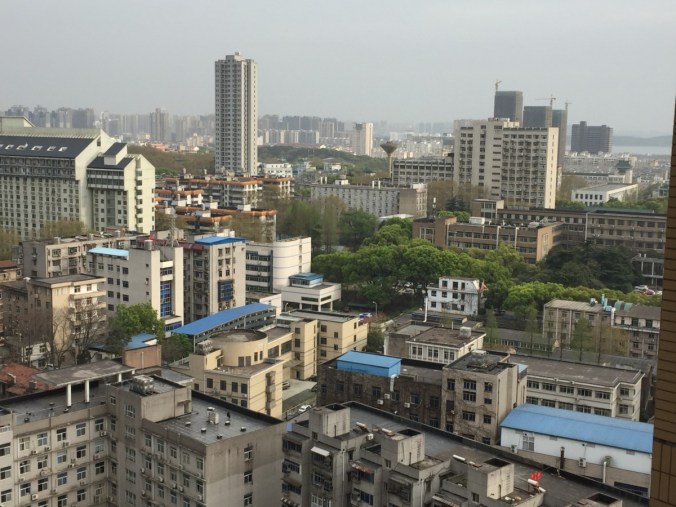 I began to realize that visiting the over thousand year old cities in China was kin to touring an archaeological dig lined and layered with history. Observing Wuhan, a blend of three ancient cities in the province of Hubei, I could not ignore the contrast to my own country whose cities are still in  adolescence . On a curve in the Yangtze,  industrialized in the twentieth century, the fat and happy (for many) city is a major stop for cruises from Beijing to Shanghai. No surprise that the heart of its downtown overflows with hi-end shopping, restaurants, bakeries and street food vendors, not to mention the Lamborghini’s and Jaguars cruising the streets (costing twice as much in China as in the US).

Ancient city indeed, but with the presence of Starbucks, Pizza Hut, Carl’s Jr, KFC, Walmart, Burger King, among other US chains, I surely felt at home. Starbucks surprised me. Italy, the country from which Howard Schultz drew his inspiration only got its first Starbucks in the last two years, while China is plastered with them from north to south, east to west.

With so many random thoughts in mind as we walked to the coffee house, I tended to forget that scooters (most of them electric) and bicycles are permitted on sidewalks. I did not need to seek out a Taoist master to get my lesson: pay attention.

Flabbergasted to see a Japanese bakery (run by Japanese) and many restaurants, helped me to understand that long standing animosities between countries do not necessarily get in the way of business!

Starbucks was packed as usual. I ordered the same drink as the day before, a green tea, almond milk latte to go. 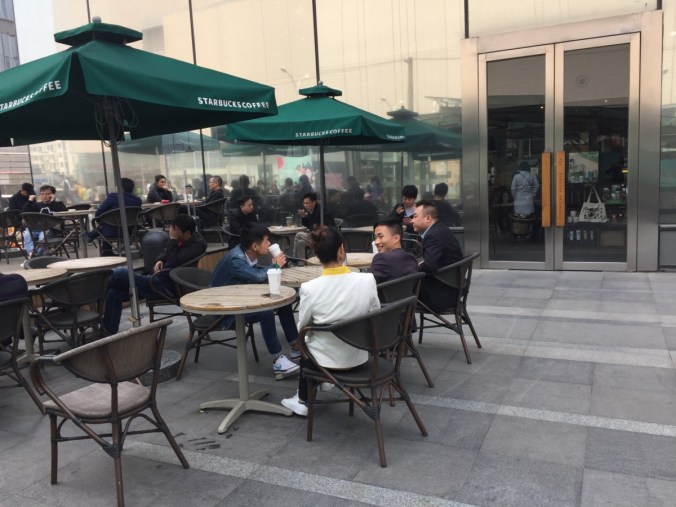 A bit of jetlag lingering, I welcomed the leisurely stroll back to the hotel. Vendors and entertainers already set up for the weekend crowds offered their wares. 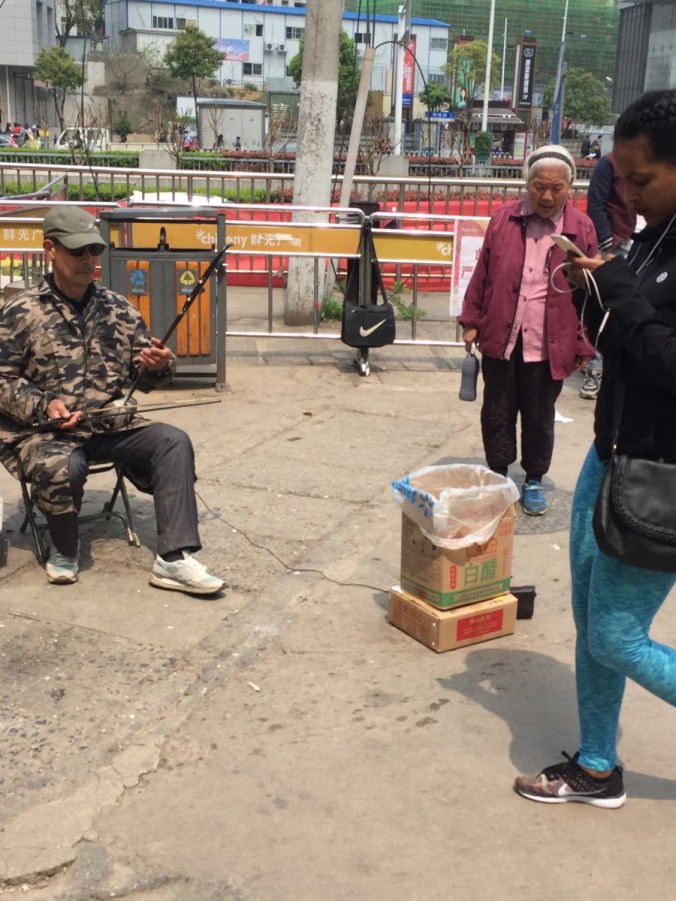 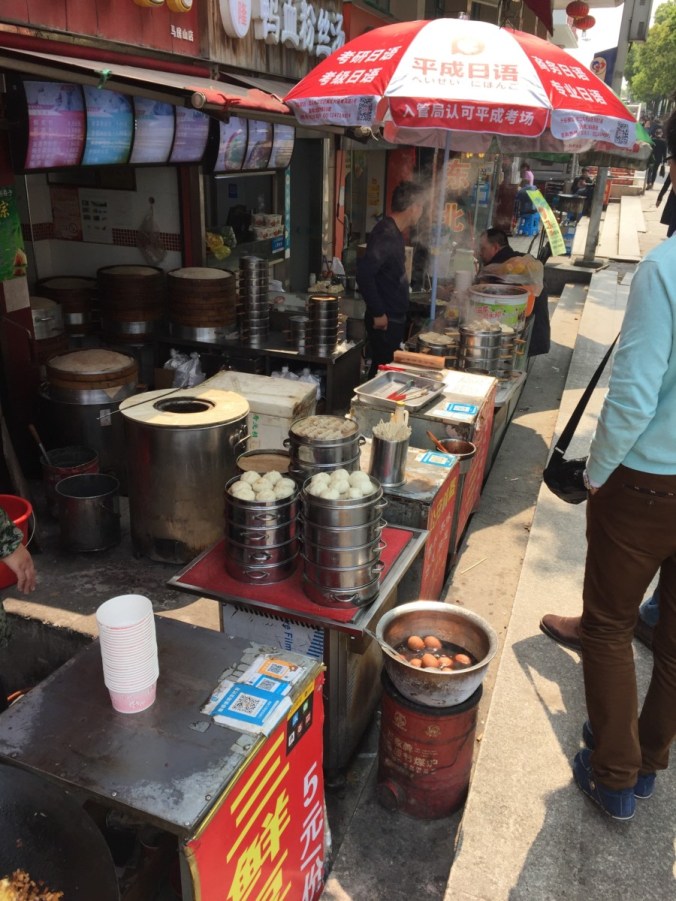 My partner had arrived two weeks earlier than I for his second round of teaching at the University in Wuhan while for me it was a weekend stopover. 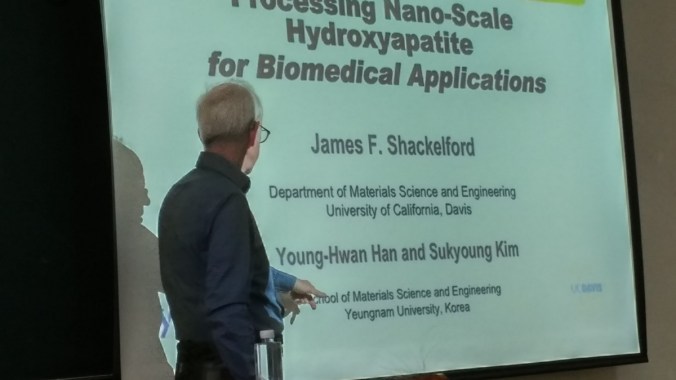 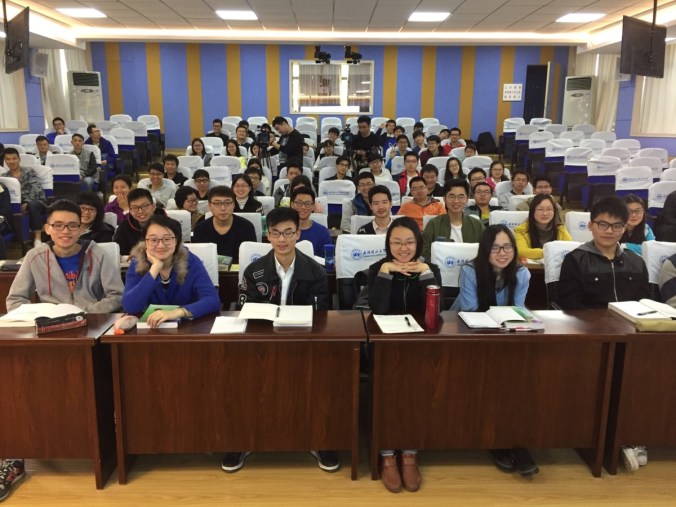 I had a chance to adjust to the time change and do a little sightseeing. We had a full afternoon ahead of us and the Hubei Modern Museum of Art was the place where I chose to spend it. From my days as an arts writer, I found that major contemporary art exhibits provided engaging insights into the current state of a culture. What I would find at the Hubei Museum was not only inspirational, but as educational as anticipated.

The question, am I really in China, played with my mind. Prior to coming, I had no expectations, only the feeling of moving into a yellow sea of the unknown. But once I arrived,  the thought, this is not what I expected, set in. I did not engage or analyze my thought. The sounds, sights, and customs of Zhongguo were opening and I wanted to remain a witness to what manifested. Analysis could come later.

A well designed museum welcomed us. 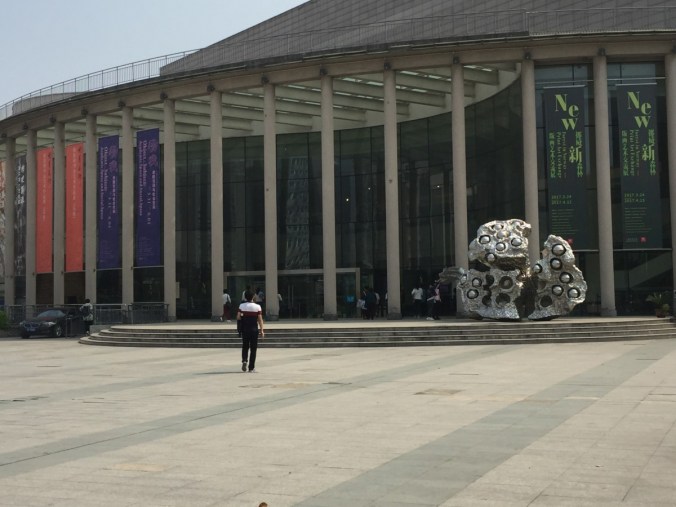 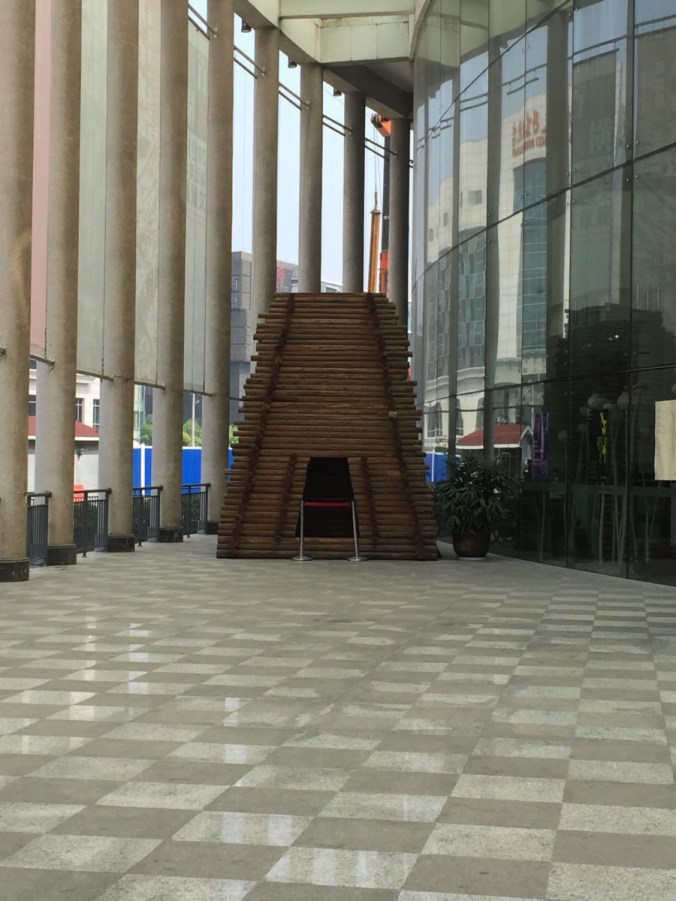 Although the current major exhibit, “Object Subject—Academic Space and Social Space” was billed as a student exhibit, after years of covering student exhibitions, I can say that the exhibit was anything but “student” art. I’ve been toying with doing a review of the show, but not for the moment. For now, I will share a photo of its statement of purpose for any who may be interested. 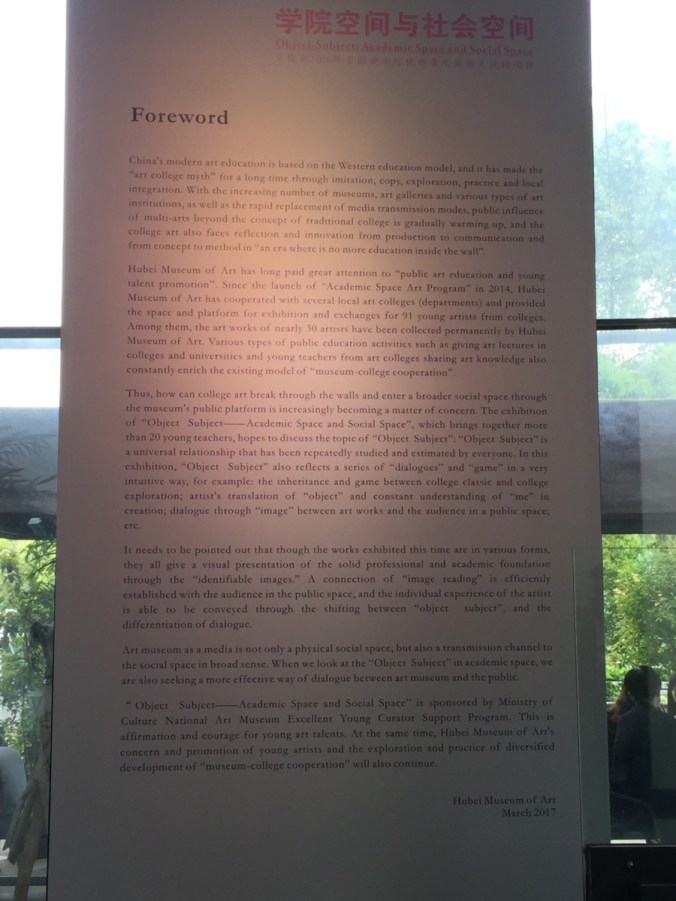 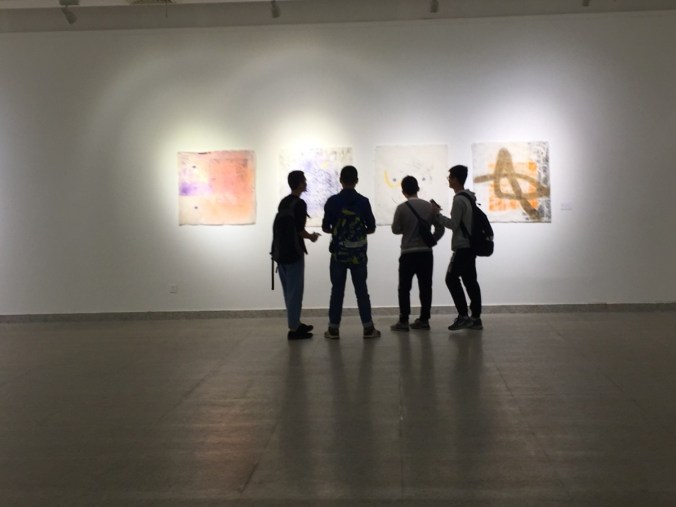 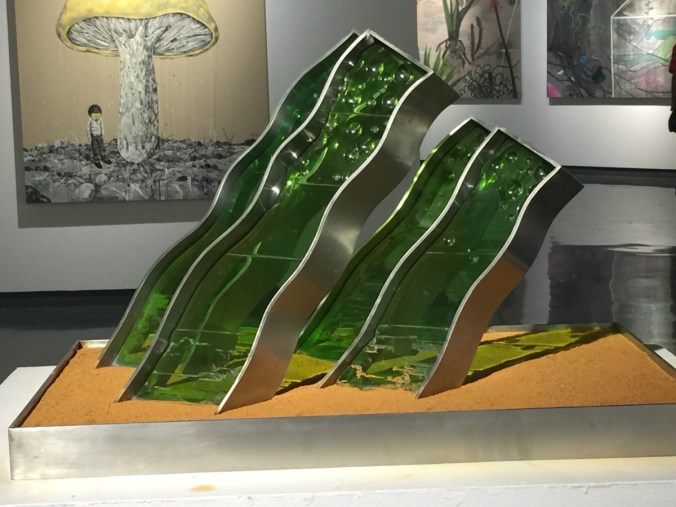 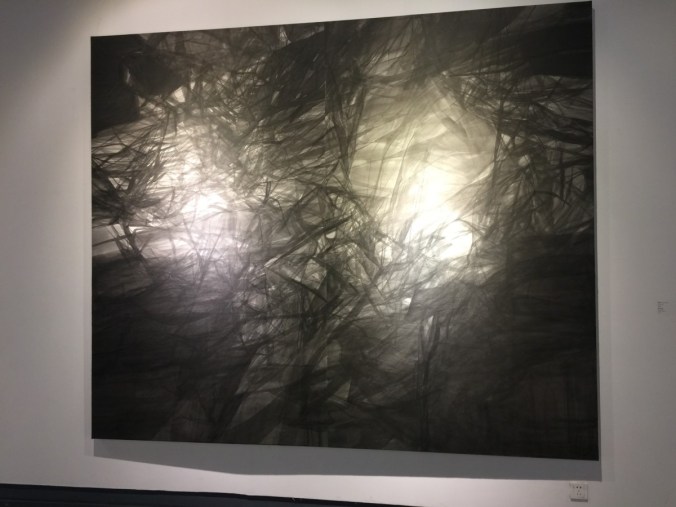 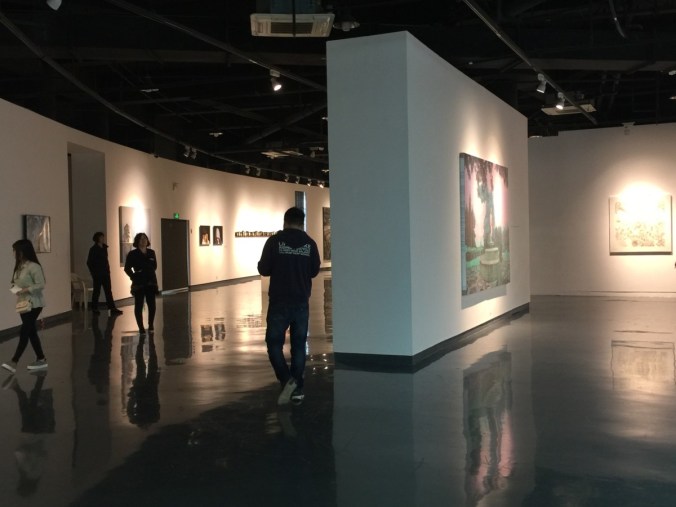 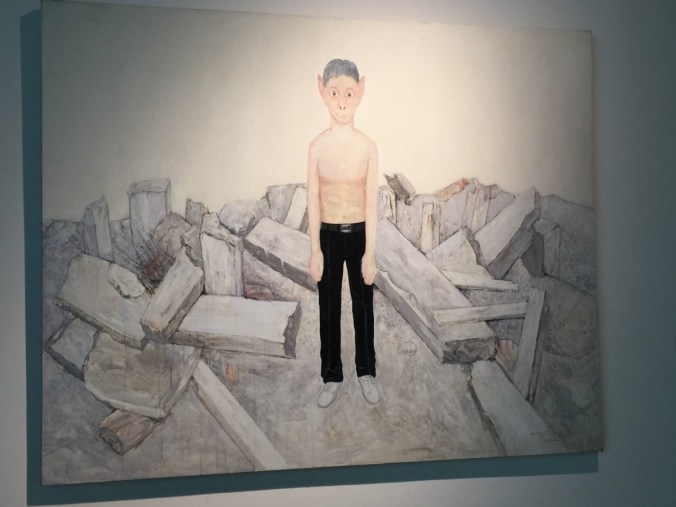 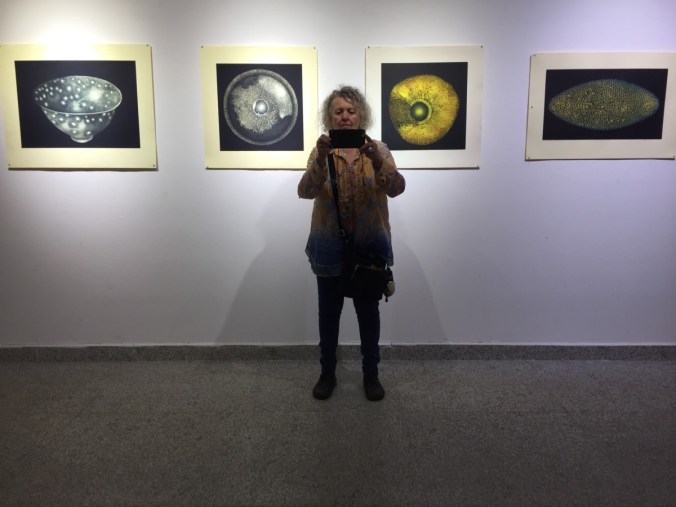 In a word, or two, the art that I observed surely achieved what art must do if it is to be more than decorative (not that there is anything wrong with decorative). As I moved through the work my inner self began to free float in unbounded space. I came away refreshed, uplifted and inspired.

Relaxing on the museum patio. 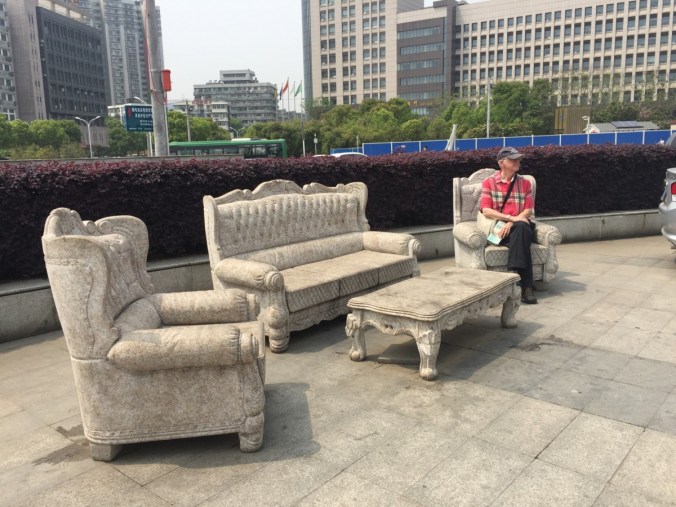 After the contemporary, we walked across the street to take a brief look at the traditional Provincial Museum. Following, a pathway led us along the East Lake before heading back to the hotel. 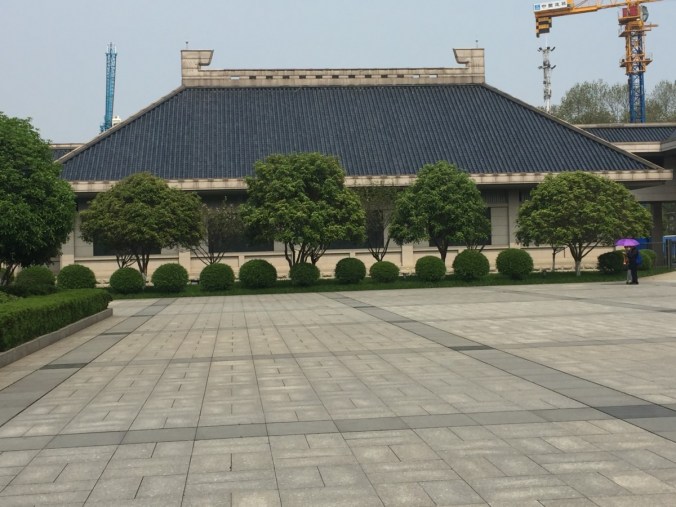 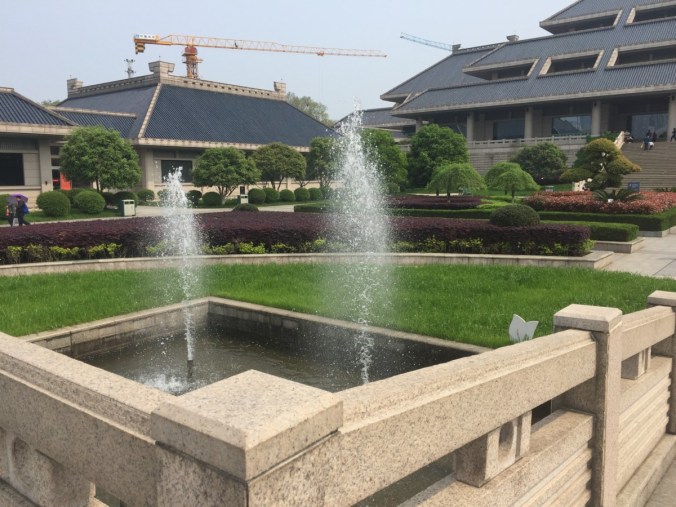 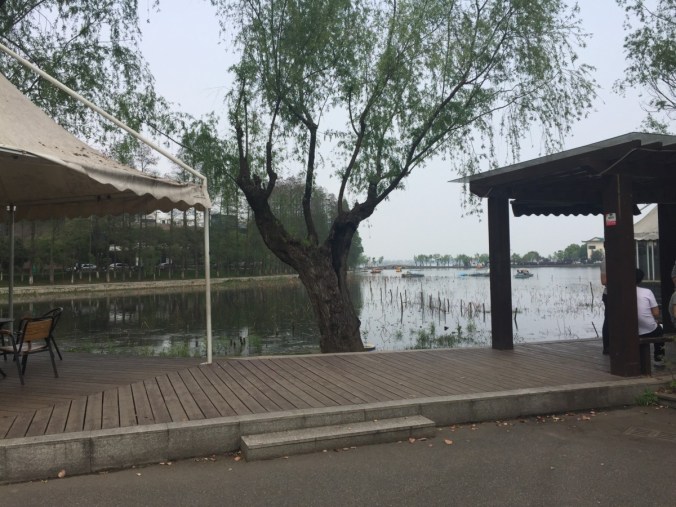 In the evening a farewell banquet had been planned at the university club in honor of my partner’s work. Academically aware of the cultural role played by Jiu among the Chinese, at the dinner that night I would have my first experiential encounter. The main host began by bringing out a small bottle of a revered Motai. Pouring it into thimble sized glass goblets, raising them to the tune of ganbei, he emptied the goblet expecting all of us to follow suit. Not wanting to offend him, I slyly inhaled the aroma of the fifty-two per cent proof drink and took a slight sip. Ah, the familiar nose of sake. Yes, China produced the first wine, a rice wine that led to sake as we know know it. 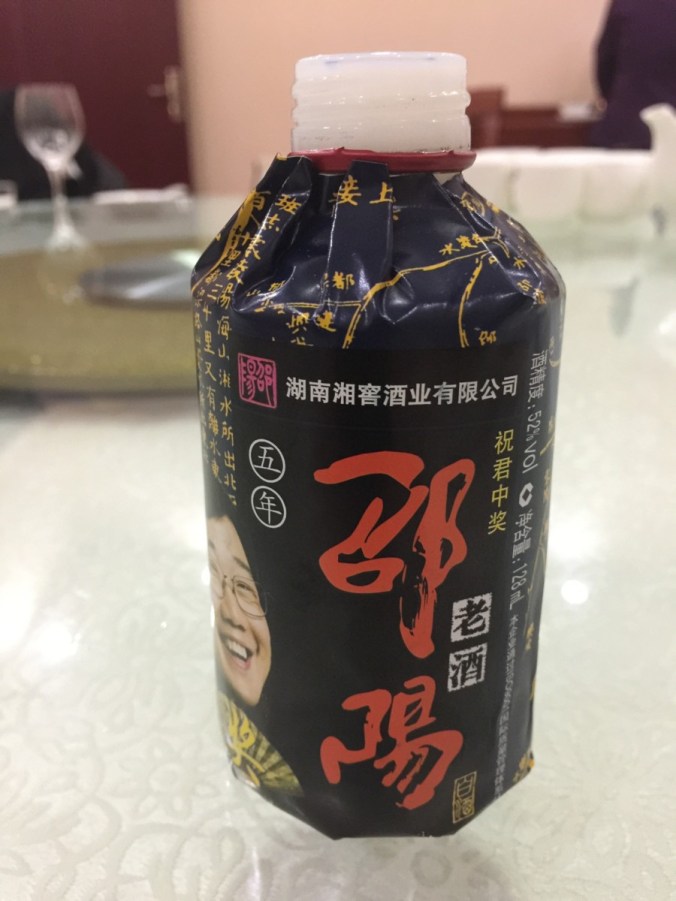 After the initial toasts, which continued throughout the dinner, servers brought the food to the table. Quite an improvement over the previous night’s shopping center dinner! 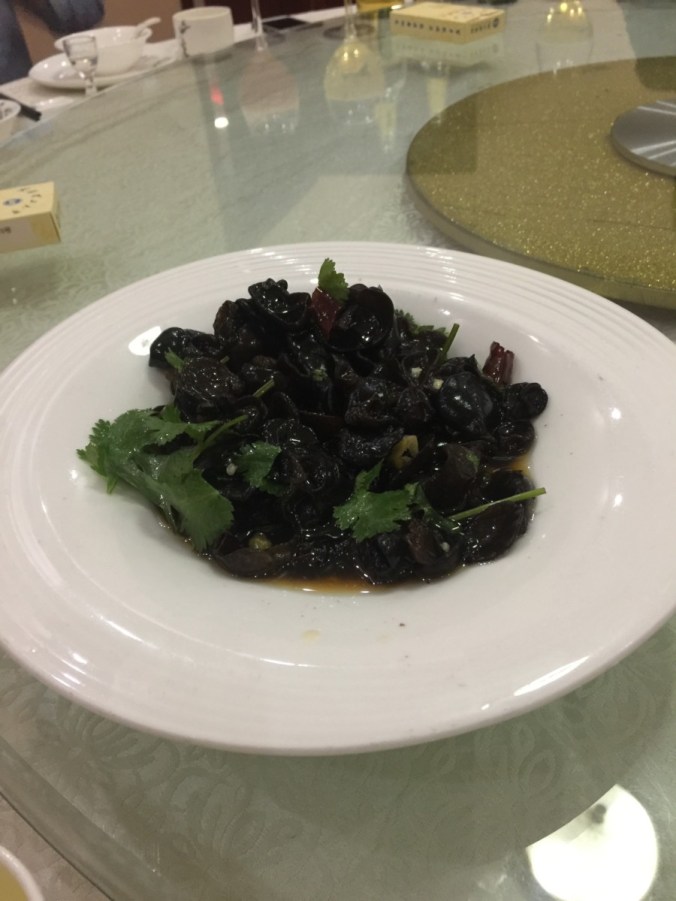 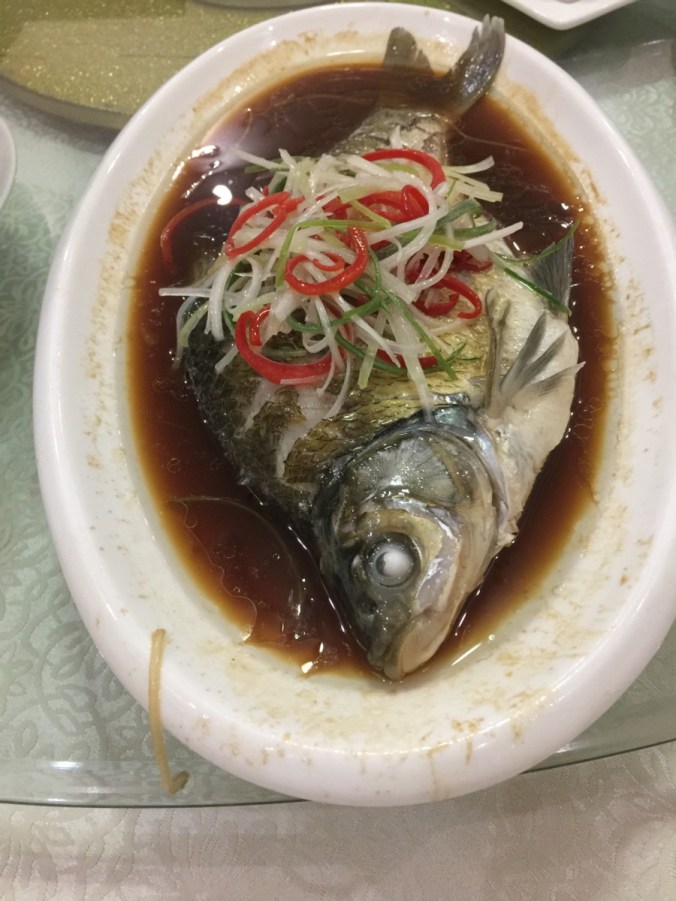 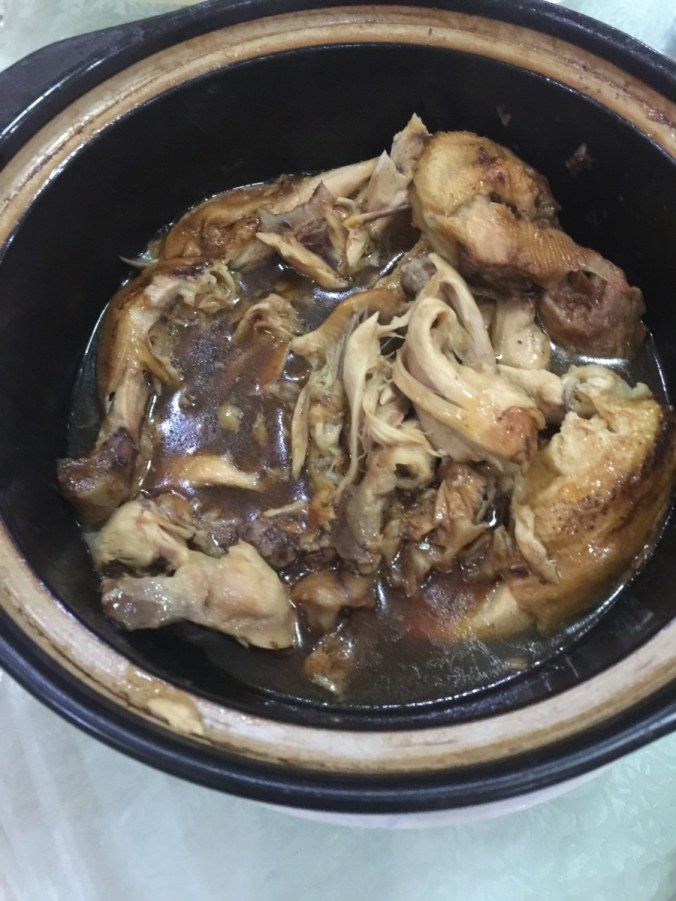 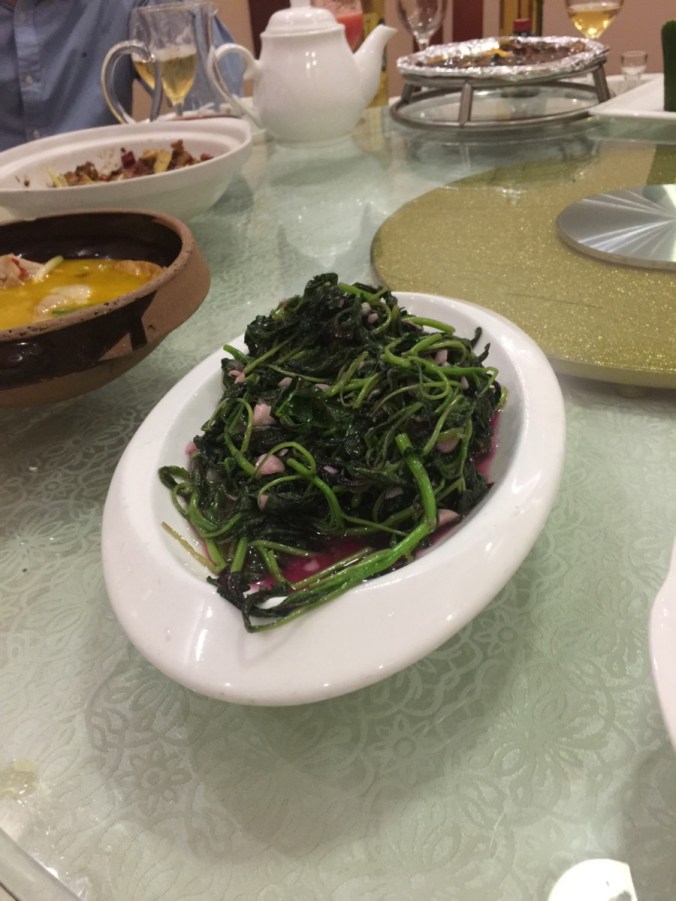 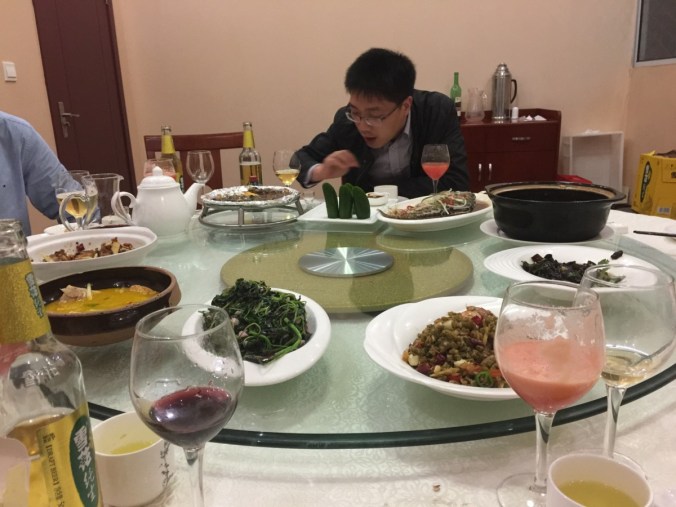 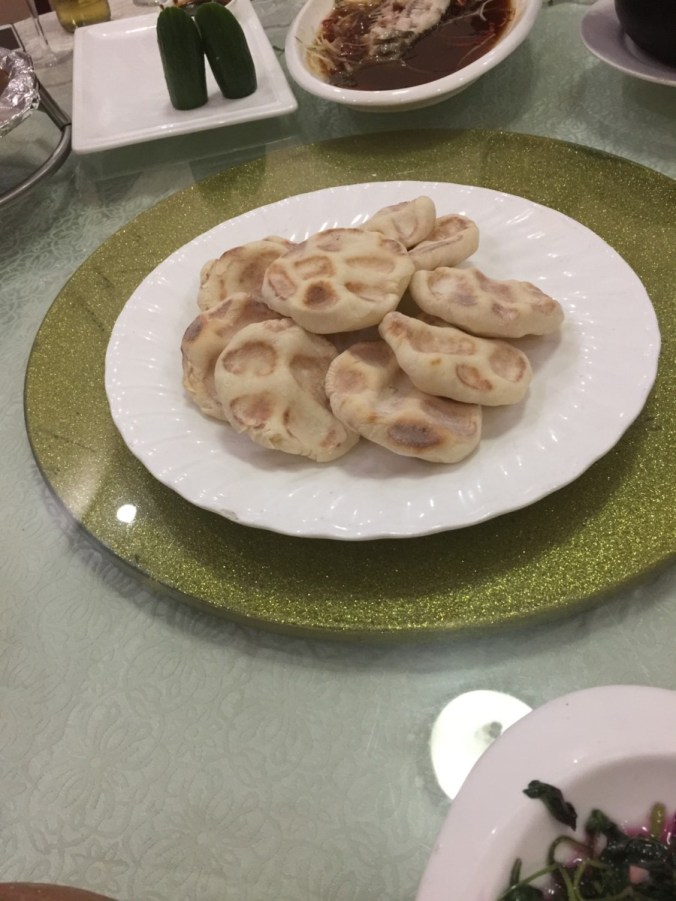 More drinks appeared as well: watermelon juice, tea, water, beer and wine – all in a night’s fun among our friends. Our host explained that the purpose of alcohol was to bring people together for sharing and laughter. But so over the top? I kept my thoughts to myself. 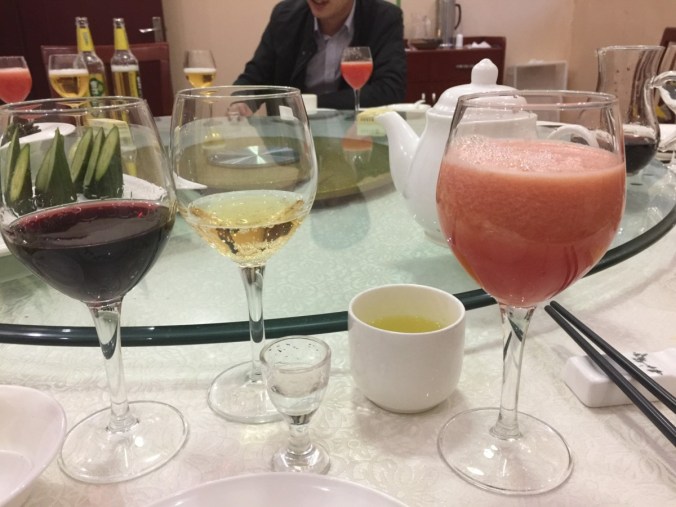 With photographs and loving goodbyes, the dinner ended. 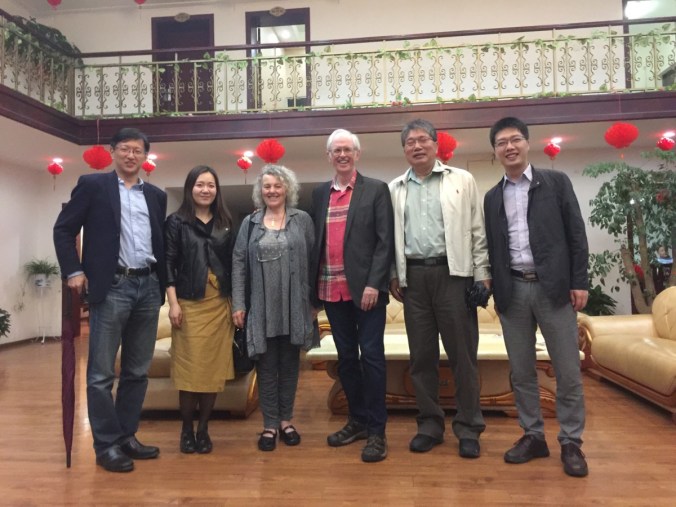 Encountering a torrential deluge as we entered the night, we were soaked to the underwear by the time we got back to the hotel. After two days in Wuhan I understood why rain in China is so welcome. From our hotel window, I had observed the morning sky’s smoggy haze mingling with overcast. Creating an illusion of fog so thick I could barely see beyond a row of skyscrapers a block away. Later in the day, when the sun finally appeared, some of the unwanted spirits seem to disappear. As for air quality, the Chinese are working on it, but at the moment it leaves a lot to be desired.

Art, Coffee, Everything Else, Food, Travel: Boots on the Ground