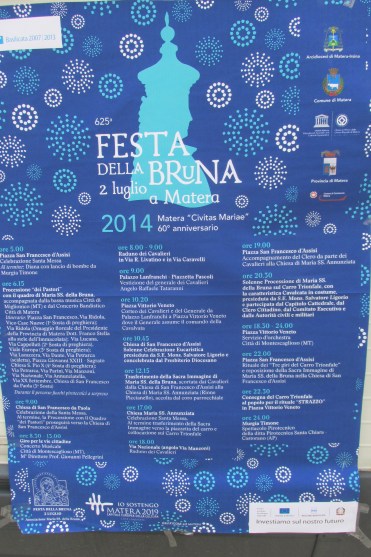 As we traveled through Sardinia, Matera and Bologna last summer, I discovered a country rich with on-going annual festivals many of which date back thousands of years. Some have become major tourist attractions as with the Mamuthones mentioned in an earlier post.

When we stayed in Matera in July we had the opportunity to witness the annual three-day festival celebrated in honor of the Madonna della Bruna. Historical and legendary accounts give an interesting background for the festival.

The legend recounts that in a time long past, a peasant woman agreed to escort a mysterious woman to Matera. When the carriage bearing the woman arrived in Matera the woman had disappeared, leaving a statue and a letter to the local bishop in her place. The letter claimed that she was the Virgin Mary. The bishop honored the letter and had the statue carried around the Piazza del Duomo (duomo is the Italian word for cathedral) three times. She became the protector of Matera. Today the statue is carried around three times in the same way on the evening of the third day of the festival.

The historical account says that in 1389 Pope Urban IV determined that the annual date for the celebration of the festival the Madonna della Bruna would be July 2. An interesting history preceded the Pope’s call. July 2 from the tenth century on became the day for the celebration of the Visitation the name given to the story recounted in the Gospel of Luke. Mary, pregnant with Jesus does a charitable act and goes to see her cousin Elizabeth, pregnant with John the Baptist. Just what two women friends, let along cousins would do if simultaneously pregnant! Urban also elevated the Visitation date to give it a place on the Roman liturgical calendar about the same time he established the date for the celebration of the Madonna della Bruna. Matera had celebrated the Visitation on July 2, long before Urban formally appointed the Madonna her role.

Prior to the celebration we know that antequated rituals to honor the earth mother goddess long celebrated through out Italy were assimilated from the fifth century on into Christian expressions. That the stories and legends surrounding them are/were real or delusional seems less important than their mythical significance.

So, whether rite of earth mother, celebration of the Visitation or  arrival of the legendary woman in a carriage, I was not prepared for the magnitude of the current day event. The shock of being knocked out of sleep by a loud cannon at 6:00 am on the first day of a tridium led me to my computer as well as to locals for a history lesson.

Marked with celebrations and festivities going on all over Matera the tridium caps on the evening of July 2. That night we witnessed colorful, loud spectacle with a secret float central to an ethereal performance that ended in an explosion of fireworks the likes of which I have never seen. (Fireworks From Matera can be viewed in an earlier post.)

The upper part of town, above the old sassis is where most of the events took place. In the week previous, elaborate decorations are constructed around and in the streets leading to the Piazza. Before the first day my partner and I took this all in, not because we were trying to, but because we happened on it as we strolled through the area looking for a place to eat, checking out shops and scouring the museums. We also encountered women from Africa doing exotic hairstyles along open-street salons and a giant street market that catered to the event. 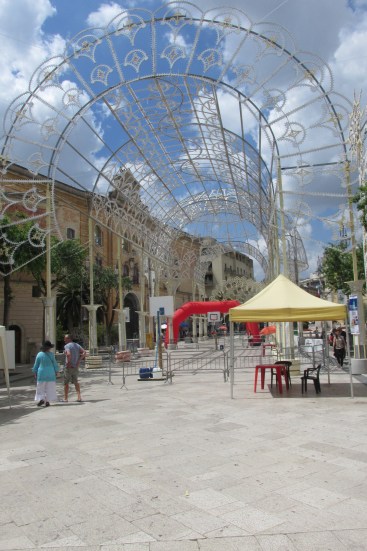 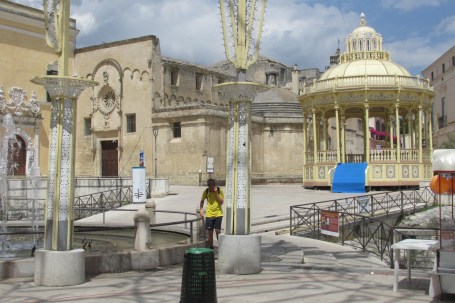 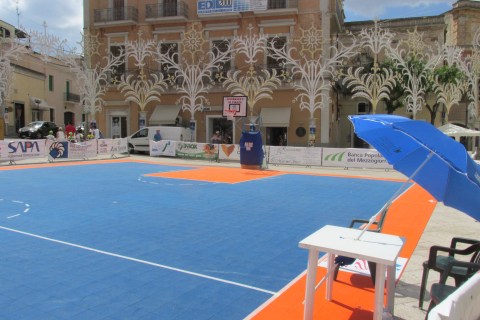 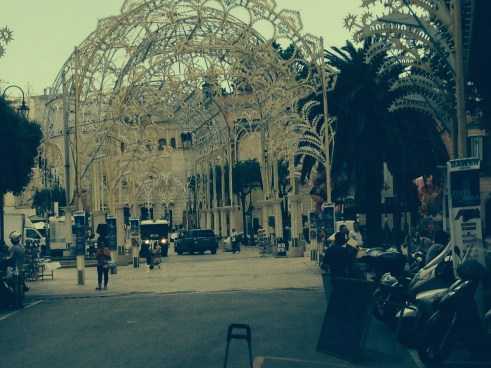 Chalk street drawings are part of the rituals. 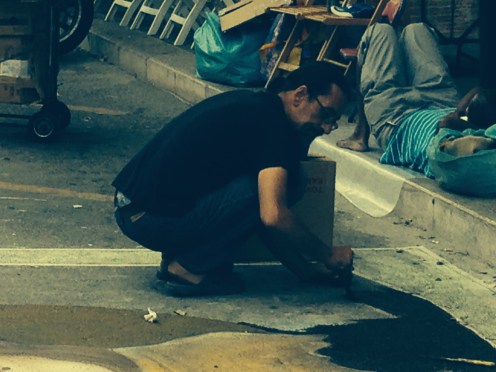 On the third morning, the Madonna statue was taken from the cathedral, put into the float and transported to another church away from the piazza. We witnessed an afternoon filled with revelry, concerts, followed by an evening meal, and as dark descended the beginning of the culmination.

In the evening invited to the home of some friends of Tim and Chris we ate buffet style-a little like Italian take-out, but made by the attendees. As travelers passing through my partner and I sans personal kitchen, took wine as our contribution to the meal. Surprised, our gracious hostess assured us that our gesture was appreciated, but not necessary.

After the meal we climbed up the stairs of the five story house to the rooftop that overlooked the Piazza, the place where the tour of the Madonna’s float and ritual would conclude. We had the equivalent of box seats for the spectacle. The friends and relatives of the hosts gathered at the balcony edge in full view. Since it was our first time, our host pushed us up front so that we would not miss anything. 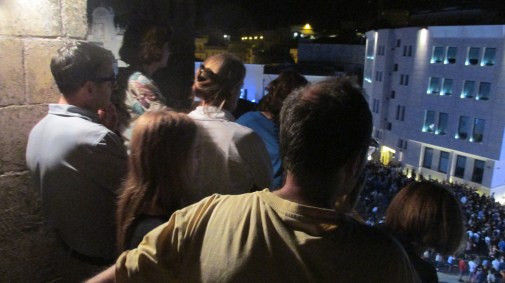 For more than an hour we observed the scene on the plaza from the rooftop. 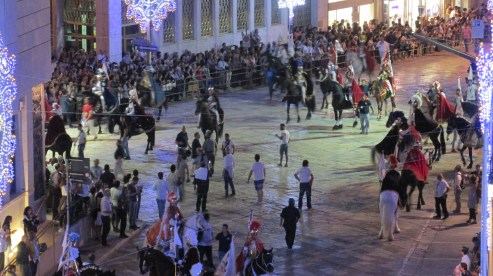 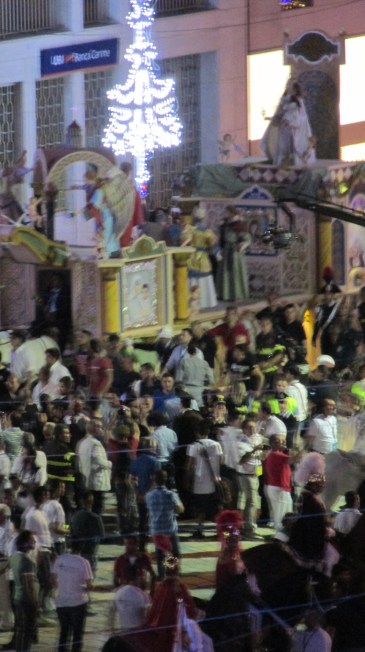 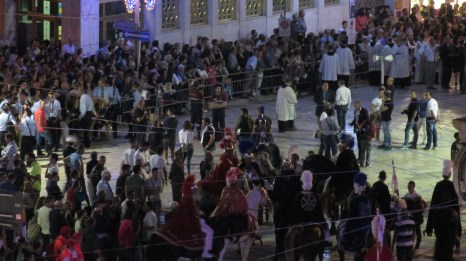 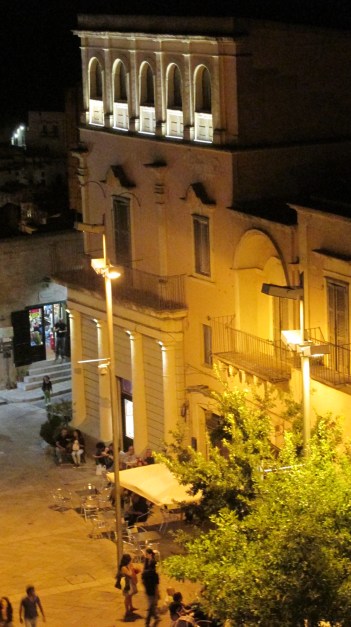 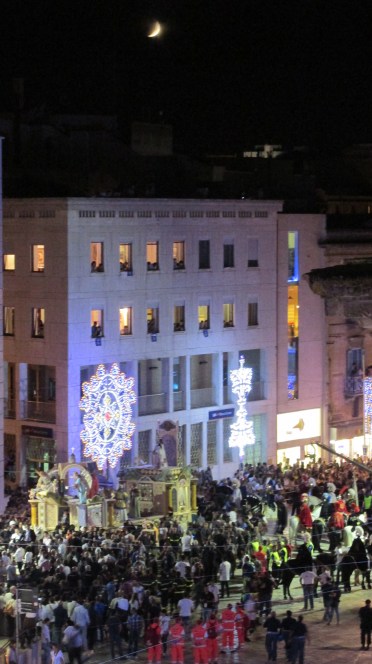 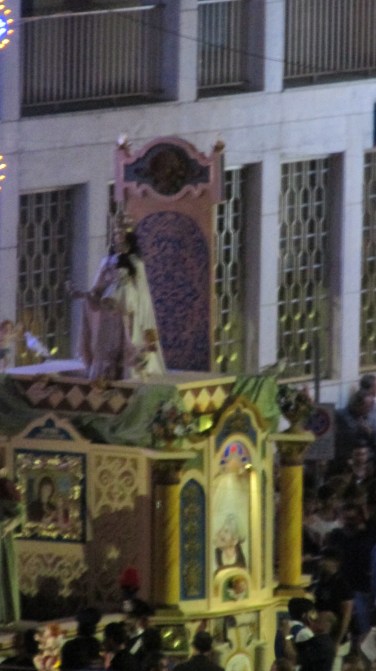 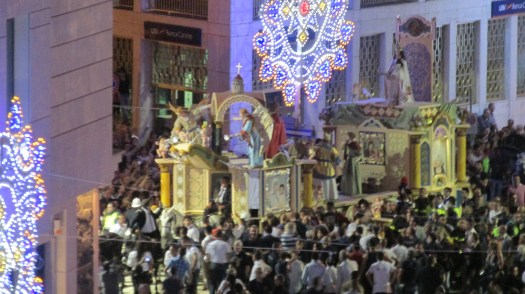 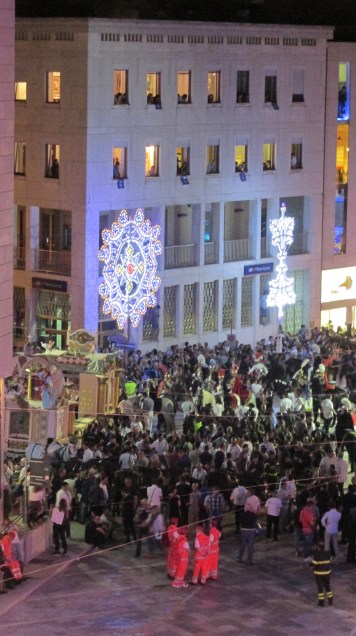 Finally, the paper mache float pulled by donkeys and carrying the Madonna  appeared.  As she reached the plaza populated to the max with locals and tourists, a full troop of uniformed knights of Santa Maria della Bruna riding tall, flower bedecked stallions, a parade of Roman clerics from the Archbishop’s court dressed in full religious regalia, and a band accompanied her float. 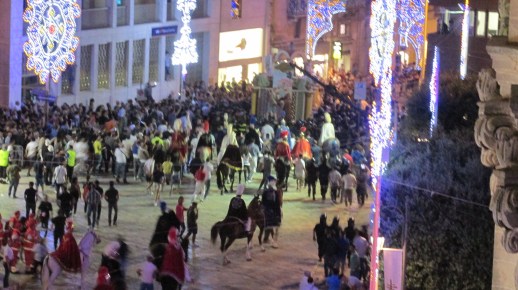 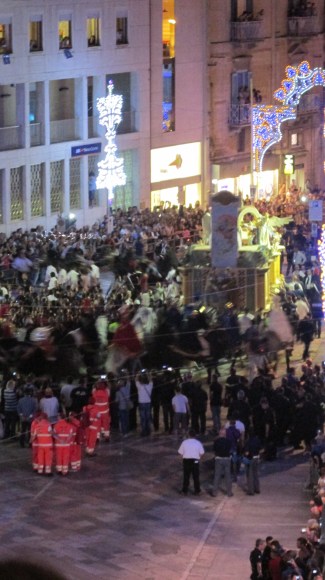 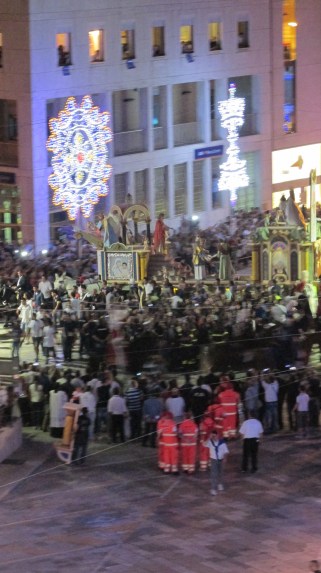 The float made the customary three rounds. Following, the Madonna was taken out of the float and carried back to the church from which she had been taken earlier. 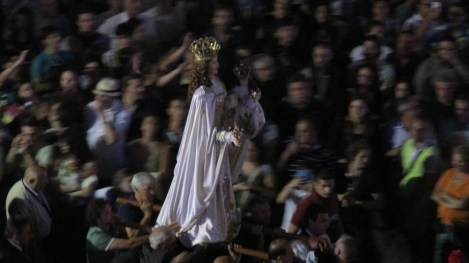 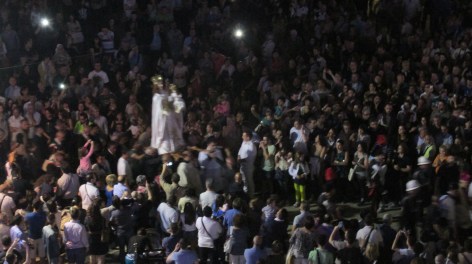 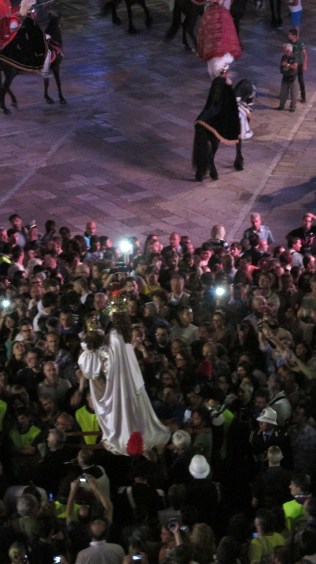 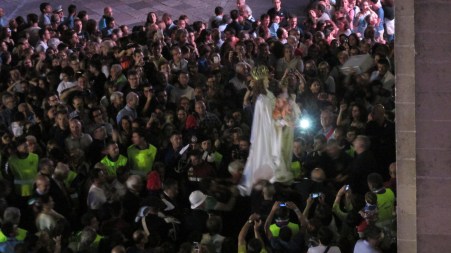 Then something strange happened. The US is not the only country that is witness to the militarization of its local police. A swath of carabinieri, dressed in military gear surrounded the float to escort it to the edge of the Piazza where the people as is the annual custom would destroy it. For this police oversight is called in. It is believed that if one obtains a piece of the float it will give protection for the following year. As the scramble for the pieces was about to begin the slow roving scene moved a little out of our purview.

But all was not lost! We climbed back down the stairs to watch the conclusion on local television. 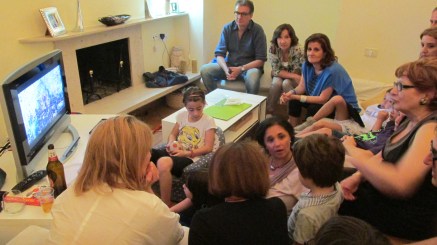 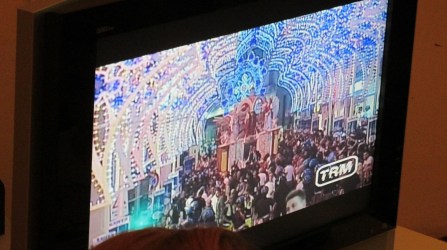 The screen showed a crowd turned mob. It reminded me of beer bloated fans screaming and yelling while watching the Super Bowl.

As I witnessed the spectacle I wondered if in earlier years the energetic aggressive forms of destruction that occurred at the peak of the celebration were present then as now. The police tried to maintain the revelers at bay until the float reached its destination. Several men taunted police and vied with one another to be the first to get on the float. A scuffle ensued. I had been told earlier that this was not a place to be as it became rough and ready, and injuries occur. On the small television screen I witnessed sacred go profane! A reveler broke through the barrier followed by several others and began to tear the float apart. The Madonna had been honored, the aggressors had conquered. At that moment my fellow spectators cheered 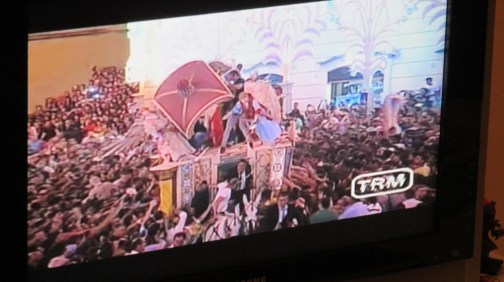 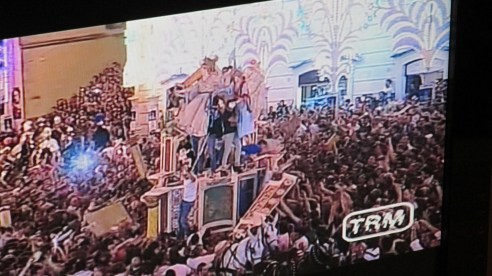 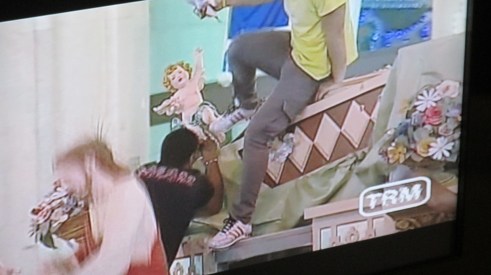 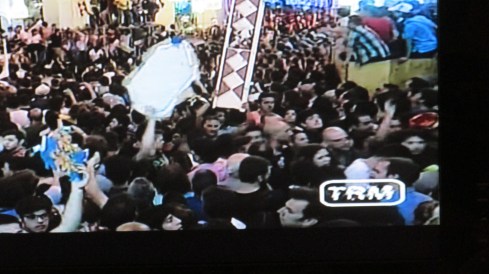 The annual ritual concluded, we thanked our guests and made our way back to the hotel. As we desscended down the steps through the sassis into the old part of Matera many people moved along with us. I wrongly assumed that they were returning home. When we reached the hotel, we prepared for bed and retired for the night. With shutter and window open a plethora of stars quivering across the night sky illuminated our room. Street lamps flickered on the plaza next to the hotel. Silent darkness filled the ravine. All quiet, we nodded off to the goddess of sleep.

Thirty minutes later, from the deep of sleep, I was roused from bed. BOOM! Shocked, I dragged myself over to the window and peered out. Fireworks. In my groggy state I thought the fourth had arrived a day early. The dark ravine had turned into a cauldron of light and color. The locals that accompanied us on the walk back to the hotel stood along the cliffs above the ravine watching the kaleidoscopic sky pummeled with rounds of fireworks for forty-five minutes. Until 1:30 am my partner and I took turns sitting on the windowsill watching the conclusion to the festival of the Madonna della Bruna 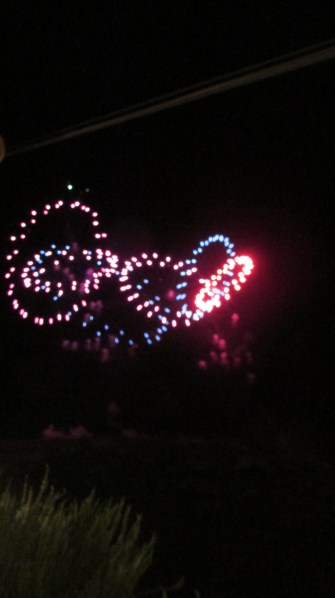