In the once upon a time of typewriters and land phones we had a post-modern qahveh khaneh (Arabic for coffee house) in Davis replete with a counter and spinning, padded bar stools. The counter faced an open window through which those of us sitting on the stools observed the cooks preparing hash browns, ham or bacon, eggs and short stacks. Rise and shine came early in those days. I would bike down to Sambo’s, the chain started by Sam Bettistone in 1957, arrive by 7:00 am notebook in hand, and take my place at the counter. As the shop filled with patrons, coffee cups, spaced a padded stool apart, formed a line like toy soldiers down the counter. The waitress never asked if we wanted a refill; she simply replenished every cup as soon as it emptied. We regulars were grateful for the bottomless cup of Folgers or Maxwell House diner coffee.

The counter was a place where writers of all persuasions gathered. Some such as myself came to eke out stories, essays, or poetry, and some, academics from UC Davis came to edit future publications. Scattered among us were other locals just in for a quick cuppa Joe. After greeting one another and a friendly inquiry or two we would slump into our private space and thoughts. Against the clatter of heavy ceramic dishes set to counter and waitresses shouting orders from the four directions to the short order cooks, Sambo’s was anything but quiet. Inadvertently, in our articulated bar stool space we nudged each other, bumped elbows and whistled forgive me’s under our breath. In spite of the hub-bub, the counter offered what we needed. Writing is, I won’t say lonely, because I am not lonely when I am in that space, but it is a place where one journeys alone. Writers have no co-workers to chat with, no clients or customers; dialogue takes place between the writer and her inner voice; yes, they are two distinct voices; at our common table the counter, we worked separately, in solitude. We wanted that solitude, but we also wanted community. Both were to be had at the counter, and, at that small university-town Sambo’s, I had my intro to counter-culture.

By the late 70’s 1100, Sambo’s peppered the nation. (Due to a surfeit of law-suits because of its derogatory name, Sambo’s became The Jolly Tiger.) Denny’s came on the scene as well and like Sambo’s offered food and a counter. Dunkin Donuts limited itself to donuts and coffee. From the late fifties, coffee shops became an established part of the national culture.

On a visit to see my brother-in-law in Seattle in the seventies, he encouraged my partner and I to stop by a new coffee house located downtown not far from the first Nordi’s! It’s interior and menu reminded us of the coffee houses we had experienced in Europe. With the arrival of Starbucks, pre-brewed gave way to fresh brewed coffee, percolator pots to espresso and cappuccino machines. Following the Boston Tea Party in 1773 Americans turned to coffee as their preferred beverage. Two hundred years later Starbucks created a major shift in the American palate.

A few coffee houses were on the scene before Starbucks, mainly Italian in places like Little Italy in Manhattan. In the sixties and in their early careers, Joan Baez and Bob Dylan performed at coffee houses in The Village in NYC. Lightnin Hopkins in his ’69 song “Coffee House Blues” complained that his woman was failing to take care of the domestic front due to spending so much time at the coffee house. However, prior to the ‘90’s, coffee houses were mainly found near college campuses; coffee shops serving family meals proliferated everywhere. But, leave it to Starbucks to pave the nation with coffee houses and a radical menu.  Latte and cappuccino became household terms.

Starbucks, later Peet’s and Coffee Bean on the West coast were among those “houses” that paved the way for an emerging third wave: sleek coffee bars many with their own roasting equipment and staffed with talented and friendly baristas.

According to the National Coffee Association, in ancient times, “Coffee was not only drunk in homes but also in the many public coffee houses — called qahveh khaneh — which began to appear in cities across the Near East. The popularity of the coffee houses was unequaled and people frequented them for all kinds of social activity. Not only did they drink coffee and engage in conversation, but they also listened to music, watched performers, played chess and kept current on the news of the day.  In fact, they quickly became such an important center for the exchange of information that the coffee houses were often referred to as ‘Schools of the Wise.’” One story describes how Sufi monks discovered that drinking coffee helped them to stay awake during early morning prayers.

As with the wine of the grape, the wine of the bean has classes, varietals, is influenced by latitude and longitude, weather, and local soil; all providing an influence on aroma and taste. Lately, I’ve been drawn to coffee from Ethiopia, the oldest site for raising coffee beans on the face of the earth. In her beautifully illustrated book Coffee Story Ethiopia, Majka Burhardt describes its history where, to this day, it creates “a livelihood for a quarter of Ethiopia’s population and accounts for 60% of its foreign earnings.”

Having the good fortune to be near enough to Portola Coffee Lab in the OC, Intelligentsia, Blue Bottle and St. Frank in SF, and Stumptown in LA, to visit on a regular basis, my palate has been  educated and broadened. I look for the quality of taste that truly reflects the bean, no interventions please, and I want a cup made individually, not one from a dispenser with coffee that has been sitting on a burner. When I travel I search out the best qahveh khaneh I can find to enjoy the finest example of the qahhwat al-bun’ (wine of the bean).

On my recent trip to Pittsburgh dark roast, bitter, pre-brewed coffee, flowed abundantly. I had just about given up hope of finding a “decent” cup when in my comings and goings from the William Penn Hotel I noticed a large poster in the window of the former Alcoa building. Under bold-faced letters, SIMPATICO – an invite into the lobby for coffee. I was skeptical – good coffee in the lobby of the former Alcoa headquarters? But longing for something better than the chain coffee at the hotel, I decided to give it a try.

The small bar dwarfed by the enormous lobby did not dissuade me. 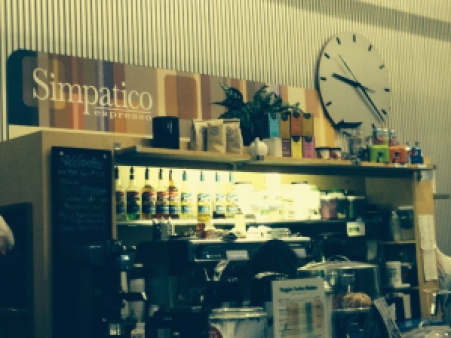 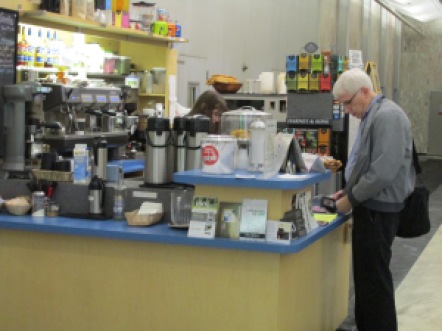 When Ward, the owner, welcomed me and asked if I wanted “pour-over or trifecta,” I knew I had made the right decision. I perched on one of only two high-topped tables and eagerly awaited  my pour-over. This was neither shop nor house, nor did it have the sleek look of the new bars, just a bar. While I waited, several people in black business suits stopped for a cup to go. Ward delivered. I tasted my Americano and melted. After finishing my cup I approached Ward and we launched into conversation about the state of coffee in the steel city. He recounted  two events that lead to the founding of Simpatico. 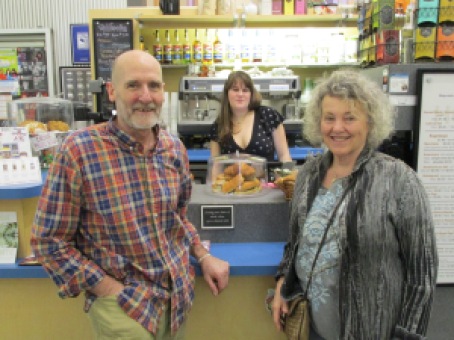 Ward had moved to Pittsburgh from Seattle to work for a start-up, but, when the start-up failed and with his background in Seattle’s coffee rich town, he decided to bring his knowledge to Pittsburgh. A second event happened when Alcoa moved to a new headquarters. With the old building impossible to sell in view of the economy, the executives of Alcoa turned the building over to the city to be used as a business space for non-profits. Ward envisioned a coffee bar in the lobby. When he approached the managers, they offered him the small area used by former security people to check out visitors to the building – a pittance of space in view of the new bars – still, a space to make coffee and one that is playing an important role in the development of fine coffee taste in the city.

Ward reads the state of the local palate honestly with an eye to improving it. Fresh roasted coffees from La Prima Espresso Company are offered from what Simpatico “believes to be by far the best roasted coffees in the region “…unlike many downtown coffee establishments, we truly care about our product: properly extracted espresso; properly steamed milk; and not everything made ‘to go’—we offer ceramic cups for you to stop, sit and relax, and thoroughly enjoy a true coffee break….We don’t consider ourselves coffee snobs – we even sell flavored coffee, in our own opinion, a belittling element to quality but definitely what many of our customers want.”

Currently, with one of two trifecta machines available in all of Pittsburgh, Ward plans to bring in others, the finest hi-tech equipment available. That he has been asked to do a second downtown Simpatico speaks well for the first. Perhaps Pittsburg a second tier city with a bad rap is beginning to prove the naysayers wrong.

Simpatico in its Latin derivation sympathia means sympathy. Sympathy: “a mental connection or bond with someone, in sync with as having a psychic link to someone, getting along with, having mutual understanding, agreeable, likely, similar convictions, drives, direction, same pathos-emotional feelings, sympathy with deep understanding and full response, shared attributes, interests, of like mind or temperament.” Herein may lie the reason that coffee houses have been part and parcel of daily life from the sixth century on.

Ward serves up the finest coffee in Pittsburgh and like its name Simpatico, the small bar in the enormous lobby serves as a place to gather and bond, the same role that coffee houses played in the Arabian peninsula from the sixth century. I am pleased that I decided to give it a try for two reasons. One, apart from the quality of this particularly well articulated wine of the bean, the local dearth of what I wanted in a cuppa joe led me on an expedition not only through my memories, but to the research stations as well. Not only did I become curious about the origins of coffee, I began to reflect on the need, not for the beverage itself, but about the fact that every country has a favorite beverage. As stated earlier, ours would have been tea were it not for the Boston Tea Party.