October 21, 2014 More to Pittsburgh than the Steelers

More to Pittsburgh than the Steelers?

When we arrived in Pittsburgh, disembarked our plane and walked into the terminal an auspicious greeter waited. Just as I am about to head down the escalator to baggage claim I spot him: Franco O’Harris a Steeler famous for his Immaculate Reception! Steerlers galore, but and here’s the interesting thing, George Washington stood next to him. Two famous historical characters from venues miles apart, though George Washington is a bit more famous. Outside of Pittsburgh, of course.

Pittsburgh is brimming with history; its citizens are proud of the relationship with our first president, and sports, (Pirates, Penguins and Steelers) does reign supreme as one of the greeters indicated, but there is far more to this most friendly of all cities.

At the moment I am sitting in the William Penn Hotel in downtown Pittsburgh surrounded by the opulent design of a former time. There is no way I want to wallow in opulence, yet the Penn provides me with the comfort I need in this moment. A dated, but finely appointed lobby with comfy chairs, oversized sofas, bordered by restaurants, a bar, and a workout room, I am home for the next few days. 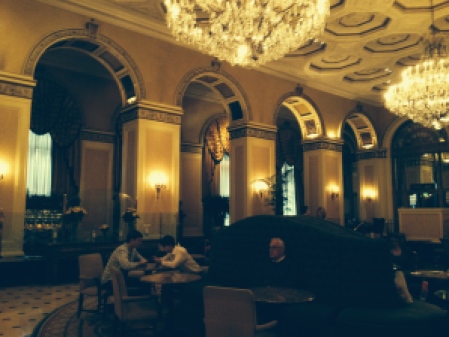 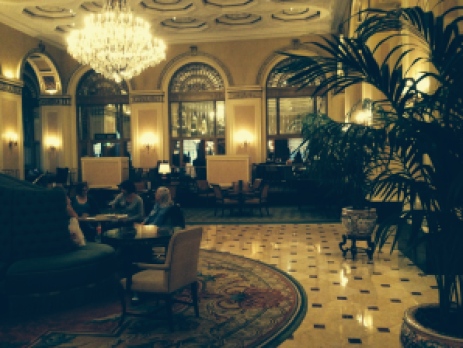 My gratitude goes to Henry Clay Frick the industrialist who ran up a six million dollar tab in 1916 to build the hotel. He intended to bring a hotel to Pittsburgh that would rival the great, grand, old world style hotels in Europe. To this day, the Penn remains what Frick envisioned: a grand old hotel. 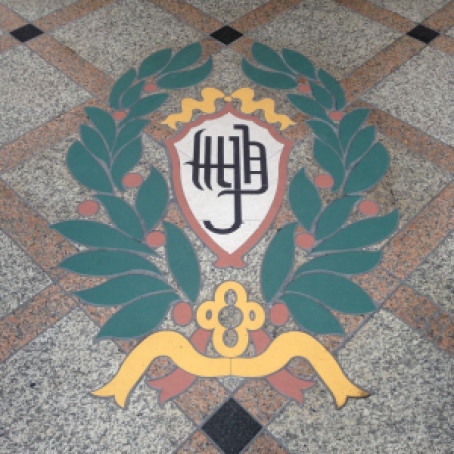 The pilgrimage to the steel city is truly a trip down memory lane. My life on this planet began on Pittsburgh’s North side in St John’s Hospital. The Sisters of Divine Providence were there, an omen for my future, assisting my mother with her long, laborious labor. I learned only today that the hospital was torn down ten years ago for, of course, a development.

Born and bred here for my first seven years established such a deep connection I will forever remain Penelope from Pittsburgh, PA. Today, while strolling around the city, I felt a root running from the soles of my feet deep into the terra below. The city felt inherently familiar and familial. As I walked its streets, bridges, hills, caught the aromas of the rivers, and heard words like babushka, you-ins, washroom rather than restroom some of the local lingo, old memories lurking in the recesses began to come forward and the bond I have with the city reawakened.

I came to Pittsburgh to accompany my partner to a conference. As soon as the plane landed, the ghosts of the ancestors began to shadow me, filling my thoughts and pulling on my emotions. Last night they haunted my dreams as I slumbered. I have no family left, I am alone in a familiar land, but the old hotel like visiting Grandma’s house offers solace, a protective place to come in out of the rain and nurse recollections.

When it opened the Pittsburgh Gazette described the Penn as “A house of a thousand guest rooms, without the need of candles, which after months of tireless energy, the employment of every known art and craft, the calling service of every ingenuity of man, is now a fact for Pittsburgh, and as such, is not only a magnificent illustration of the enterprise of Pittsburgh men, but its opening is an epoch in the history of this city as a community, …” How wonderful that even the building of the furniture was farmed out to local craftsmen.

To this day, the Palm Court lobby with walnut pillars, green Italian marble floors, a resplendent ceiling reputedly copied from the French Palace at Fontainebleau remains luxurious and lavish. The one per cent who formerly lollygagged in the lobby, feasted in the dining rooms still adorned with frescoed walls, hand-cut chandeliers and vaulted ceilings, danced their nights away in the ballrooms. Later, in the forties my parents would come to dance to the music of Lawrence Welk. To this day the large ballroom is named in his honor. As I walk past I hear echoes of his champagne music.

When it opened, hotel guests were offered the latest amenities including: iced drinking water on tap, “certified” lighting, electric clocks, a telephone in every room and a private bathroom. The latter was offered at a time when many Americans were still using outhouses. (Add Internet, television, shower, refrigerator and room service for my current amenities.) The initial rate per night started at $2.50 for a standard room and escalated to $50.00 for a seven-room suite. I am paying a lot more. Thankfully it is under the cover of a business expense.

As we taxied in (Uber is not allowed to pick up at the airport), Liberty, Penn, Forbes, Fifth, Sixth, Seventh Aves – the names of streets that formed the grid I walked as a child called up images of taking a bus with my mother from the borough in which we lived to downtown. Frequently, we made on our way to Kaufmann’s Department Store where my grandmother worked at altering men’s suits, designing wedding dresses and making my clothes on the side. Edward Kaufmann, the President of Kaufman’s, commissioned Frank Lloyd Wright to build Falling Water leaving a legacy far more famous than my grandmother’s design skills.

I remember downtown Pittsburgh when hang-over from the raspy spewing breath of coal mines and steel mills was so thick some days we could hardly identify the sun. And in the dead of winter, skies rained so much soot the snow cover turned black. 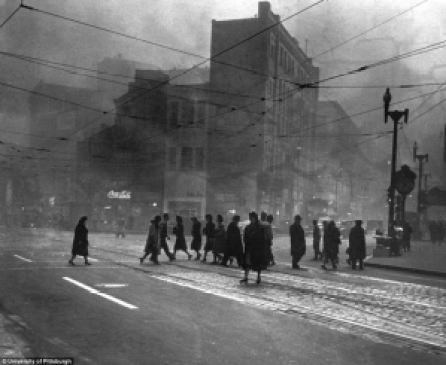 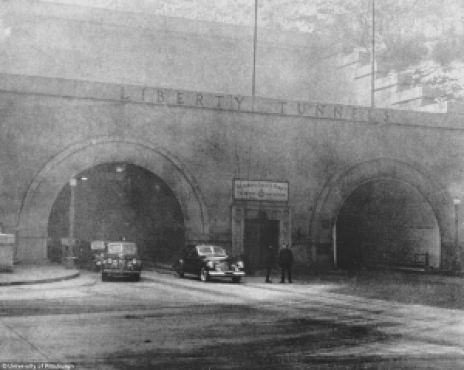 I recall leaving the city seated in the back seat of my dad’s old forty-nine Chevy to drive north to Butler County where the crystal blue, elegant skies that covered my great grandparents’ farm offered welcome relief.

The farm had been in the family since deeded to my several times removed, great grandfather, General William Critchlow for his service in the Battle of Saratoga during the Revolutionary War. Drives through violet pocked shimmering chartreuse-carpeted hills in summer, snow and ice flows in winter, imprinted scenes of the rolling hills of Pennsylvania permanently into my cerebellum. Inexorably, our journeys concluded on a pebbly dirt road angling up to the farmhouse through Grandpa’s sheep pasture to one side, buckwheat crops to the other. Buckwheat pancakes. Wish I had Great Grandma Chatham’s recipe.

Years later after we had moved to California Grandma Ethel May informed me that the farm had been deeded to the Boy Scouts when my great grandparents passed. Considering how the farm came into the family, that the Boy Scouts got it seemed to hold a certain logic.

On arriving in Pittsburgh today one would never suspect there had been a time when it rated as one of the worst, smog-full, polluted cities in the country. As I poked my way around earlier today the skies bode clean and clear. Not only skies, but streets as well. 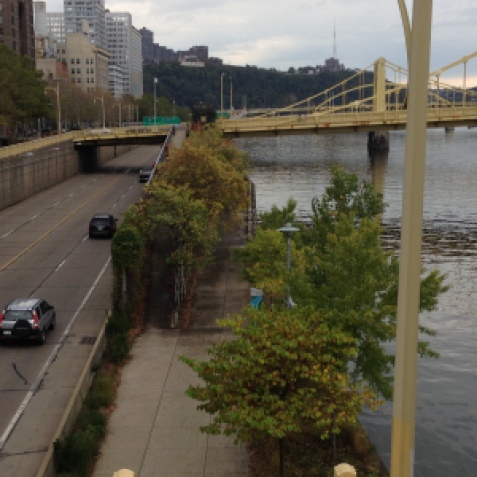 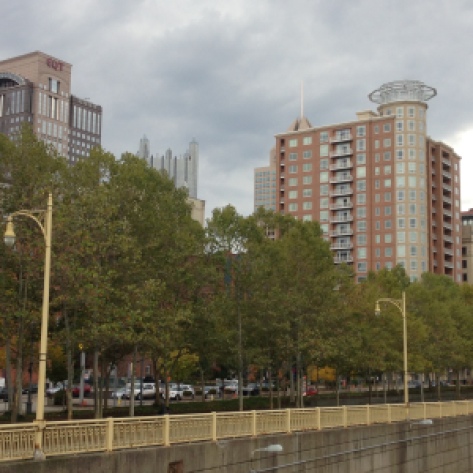 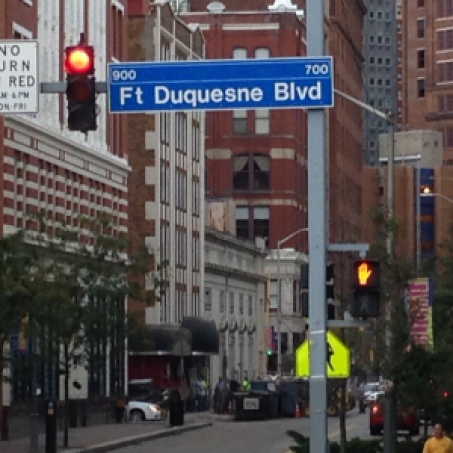 In eighty-five ethnic neighborhoods old traditions maintained with differences among groups respected, continue to this day. As children we were told that we did not cross over to their territory uninvited, or “they” to ours. There was nothing wrong with any of us we were told, it’s just that “we are different” and should stay among our own. Lines were not only black and white. A mixed marriage – momentous – engendered discussions among the elders about whether the wedding ceremony should take place in the Polish, Irish, Italian, German, or Slovenian Catholic Church? As they were all Catholic I wondered how the Irish Church differed from the Italian? When I questioned them, the elders chided me with, “that’s just the way it is.” I said little in response, but and argument about ethnicity and race indued between my elders and my inner voice.

As demographics are changing, I suspect that the beautiful mosaic of ethnic groups with each piece loving its own, is changing as well. Community and tribes gather and form for reasons other than ethnic lineage.

Before leaving California, I researched the Pittsburgh food scene. The meat, mashed potatoes, corn, beef and cabbage, kielbasa, pierogies and salt water taffy of my youth would not serve my aged body. I searched every food site from eater.com to Yelp to the Pittsburgh Chooses sites and made up a short list of the eateries that appeared most frequently in the top five. I consulted with the locals. I wanted to eat the food of a progressive chef who is not afraid to move into new and tantalizing places with eye  fixed on vegetables. Paul the concierge at The Penn was confident that Grit and Grace would meet my requirements. “It was the only Pittsburgh restaurant to make opentable.com 100 best in the US list.” When I found out that its Chef, Brian Pekarcik from Murrysville, Pa had spent time at Gary Danko and Fifth Floor in San Francisco I was sold.

Walking over to Grit and Grace from the Penn earlier this evening, I missed the flocks of pigeons I chased off the street as a child. Nowhere to be seen.  When we arrived we decided to sit at the bar where conversations can be lively and informational. It’s is a great place to get to know people in the industry and with Pittsburgh being one of the friendliest cities in America, it called.

As I pored over the menu, the same menu I had checked out on line earlier, the lady next to me introduced herself, illustrating the friendliness I anticipated. Told me she lived in the southern part of the neighboring state, West Virginia. Had come up to attend a Jackson Brown concert with her daughter. She went on about how much she loved Jackson and let us know that if we were interested it was still not too late to get tickets to Fleetwood Mac who would be performing the next night. Always pays off to sit at the bar!

Grit means the texture of sand or stone used in grinding, and courage, resolve, strength of character. Grace, the simple elegance or refinement of movement, free and unmerited favor of God. Definitions of both words printed at the top of the menu inform the diner about intention.

1. simple elegance or refinement of movement.

2. free and unmerited favor of God.

It is said that everything needs an opposite in order to exist… to achieve balance.

“Grit & Grace pushes opposites to the extreme to bring you the most unique and balanced dining experience Pittsburgh has to offer.”

Chef knows his dictionary; I wondered if the conceptual would carry over into the food.  Pekarcik makes choices that represent “the diversity and sophistication of today’s diners.” Goat and curry, ramen, short ribs and biscuits, kimchi are but a few examples. He carries his choices through in the three daily condiments as well: soy and black vinegar sauce, chili sauce and fennel-onion compote. G&G specializes in small plates and American Dim Sum. 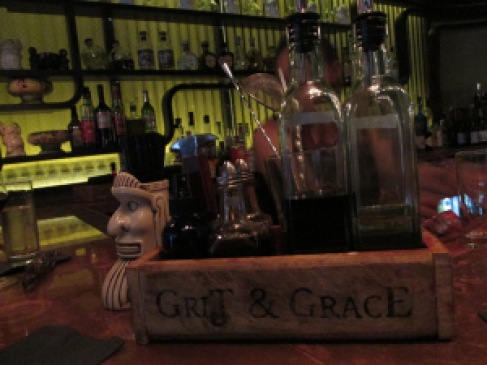 To be honest, I did not expect to find such quality, creativity and artistic ability of the chef an a restaurant in the city on the rivers. How I wish that Grit and Grace were around my own neighborhood corner!

Food, Travel: Boots on the Ground