Do you have high blood pressure, cholesterol, diabetes, obesity or gastrointestinal issues? Check this out!

It never ceases to amaze me that when I have a need, more oft than not, an answer walks through the door. If I maintain a relaxed openness rather than descend into a state of anxiety, it allows space for whatever I may need to come my way. I gave an example of this in my post on nagaimo. Recently, I experienced another of the same. 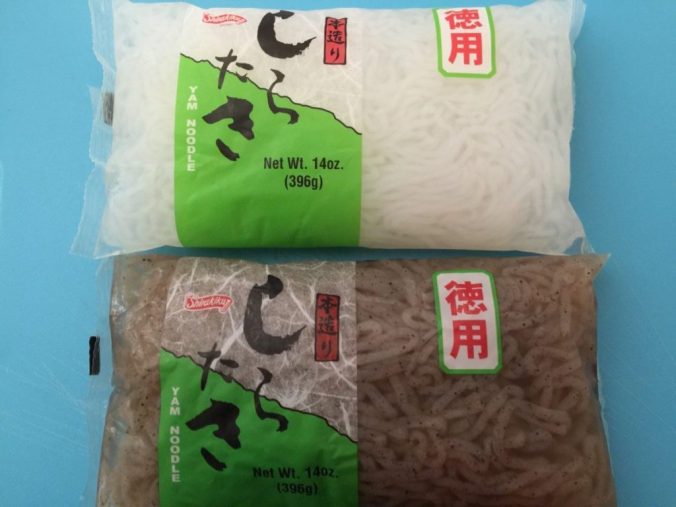 Again I was strolling through Mitsuwa my favorite Japanese supermarket in the OC. As I passed a cold storage bin, I noted packages of odd looking, grey noodles. My first thought, an unusual form of udon or soba, or perhaps seaweed? Curious, I picked up a bag. The water-filled package prevented me from getting a grasp on the texture of the noodles. Turning it over to check the ingredients, I read: yam flour, and a bit of seaweed powder. Conjuring up images of yams being converted to flour I left it at that. What most grabbed my attention was the fact that the noodles  were calorie, carb, cholesterol and sodium free! 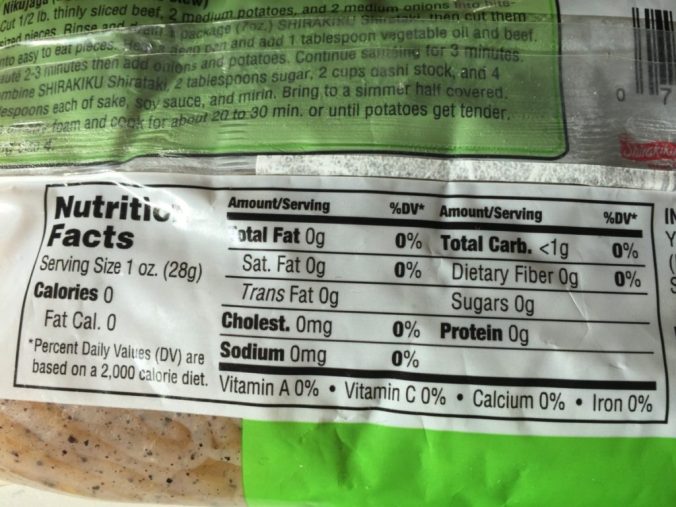 Just when I had been feeling the need to drop a few pounds, shirataki noodles turn up at my door, so to speak. How calorie and carb-free noodles could be made from yam flour was a question whose answer would come later. In the meantime, the idea of calorie free vegetarian noodles was more than I could resist. With a bit of kapha in my dosha as described in Ayurveda, I am blessed with an abundance of the earth element, along with a predisposition to absorb ever more. Over the decades I have countered the tendency to gather all of Gaia into my lower belly with periodic fasts, low cal-carb diets, even liquid meals. I gave up croissants and foods made from flour long ago. I tried rather unsuccessfully, to become a breatherian some years back.

Having little to lose at $1.59 a bag, I added a package of the grey colored shirataki noodles to my shopping cart.

Once home, eager to experiment, I opened a package of shiratakis. With a rubber-like consistency, the noodles wiggled as I poured them into a colander.  A good washing was recommended on the back of the package. Noting how long they were, approximately three feet, I decided to quarter them as well. 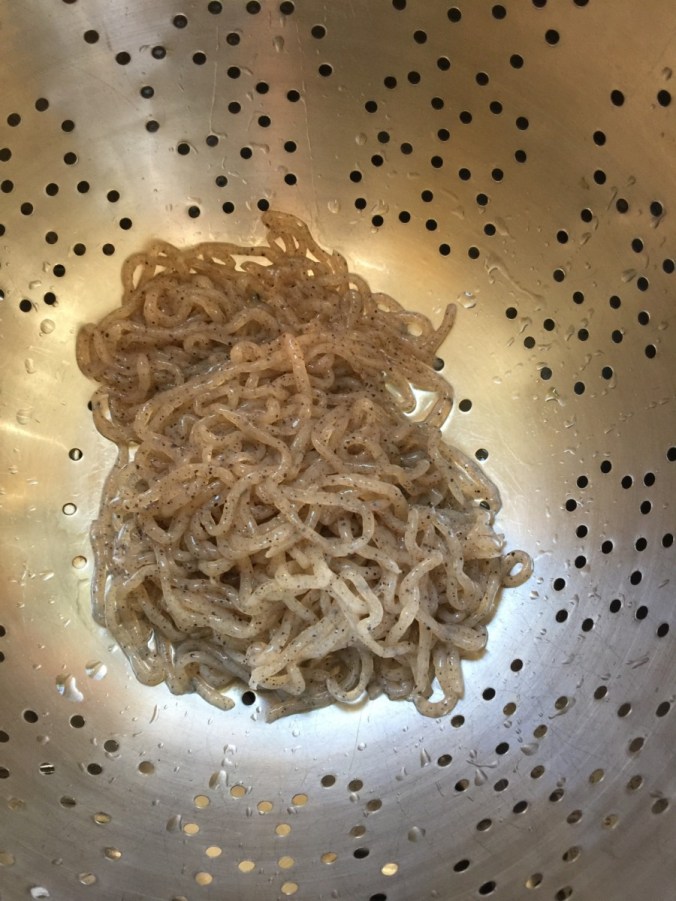 A beef and potato stew recipe was also listed on the package. Having given up beef thirty some years ago, a stew was out of the question. Instead, I decided to play with my limited knowledge of Japanese cuisine. First, I took a few minutes to create a dashi stock by adding a piece of kombu to a pan of boiling water. Fifteen minutes later I added the noodles. 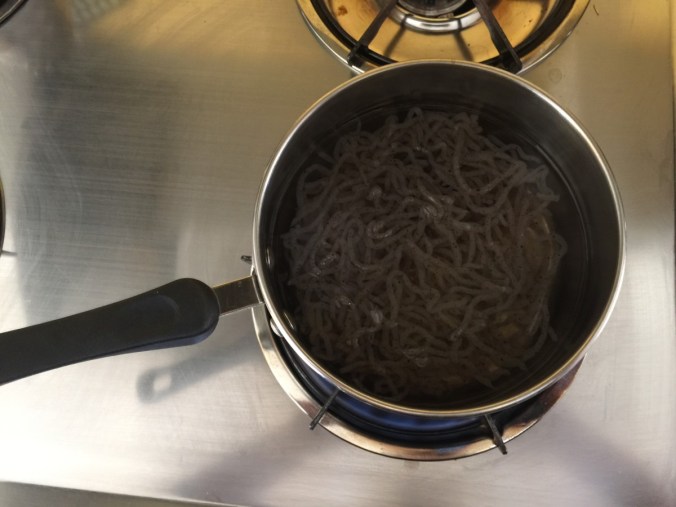 With my proclivity to combine ingredients from more than one cuisine, I made a traditional mirapoix of onions, carrots, celery, and garlic while the noodles boiled. Sautéing in coconut oil, until soft, I followed up with a dose of mirin, rice vinegar, soy sauce and a bit of Thai fish sauce. I have not come across a recipe that uses fish sauce with shirataki noodles, but I find the subtle flavor a hint of fish sauce can give to a dish irresistible. When the mirepoix had softened further, I drained and added the noodles with a little of the dashi. 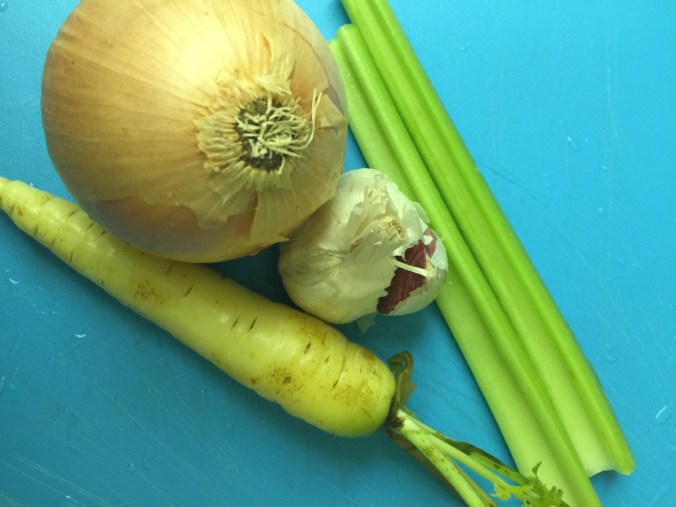 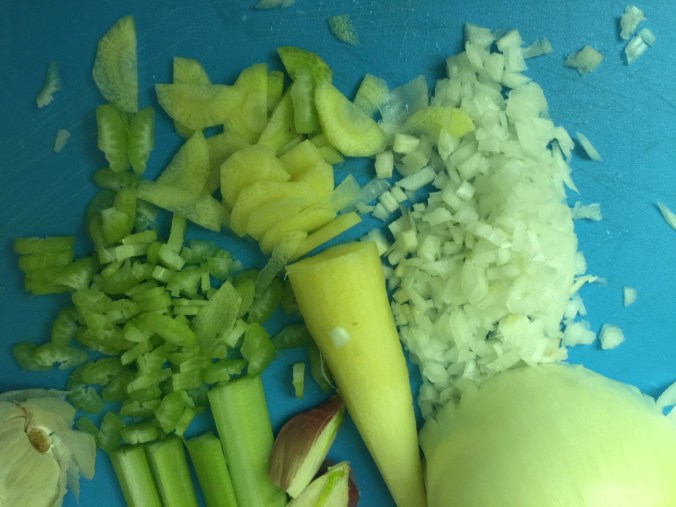 While they simmered I looked through the fridge to see what else I had that would go well with the noodles. Daikon and red bell pepper! I lightly steamed the former, sautéed the latter, added to the noodles and simmered the entire dish on low heat for approximately 30 minutes. Finally, after plating, I topped my noodles off with chopped cilantro and a handful of sliced chestnuts. Pouring a small glass of a traditional sake to accompany, I sat down to a tasty, satisfying, low cal dinner! 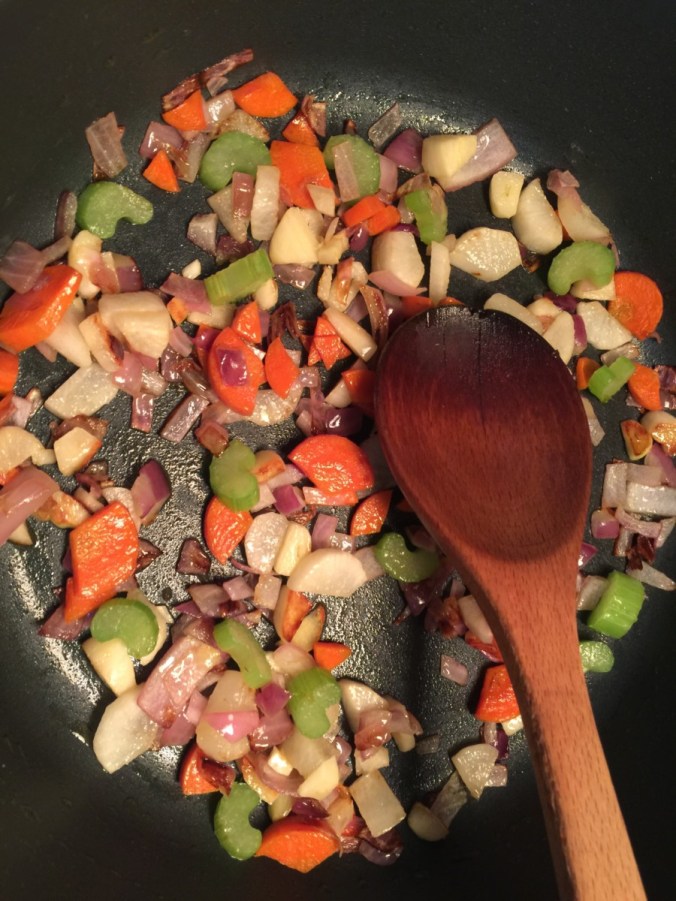 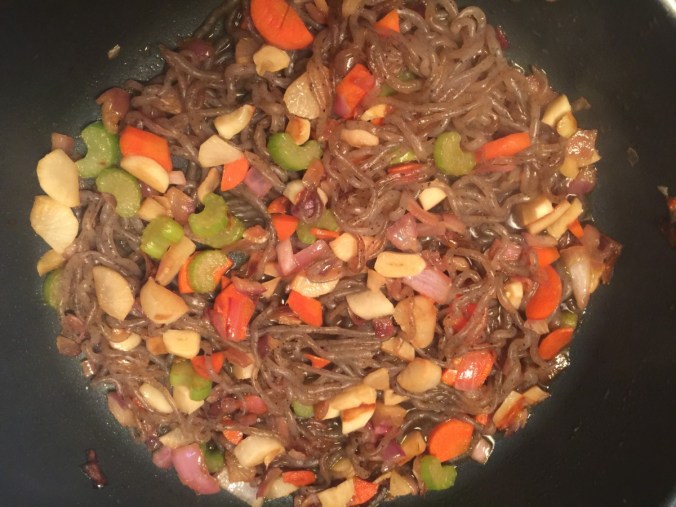 Soon after, on another shopping expedition to Mitsuwa I realized that the packages of white noodles next to the grey were also shiratakis, sans seaweed powder. I purchased several. With color playing on my mind, I was led to experiment with my favorite Italian pasta recipes. With cream, tomato sauce or a carbonara, I was not disappointed. Over the next two weeks, I sat down to superb pastas minus the calories of linguine, spaghetti or buccatini. 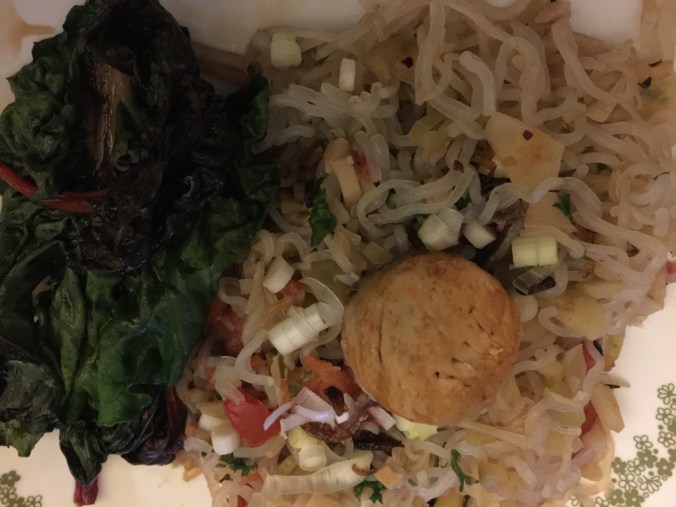 Shirataki with monkfish liver and chard 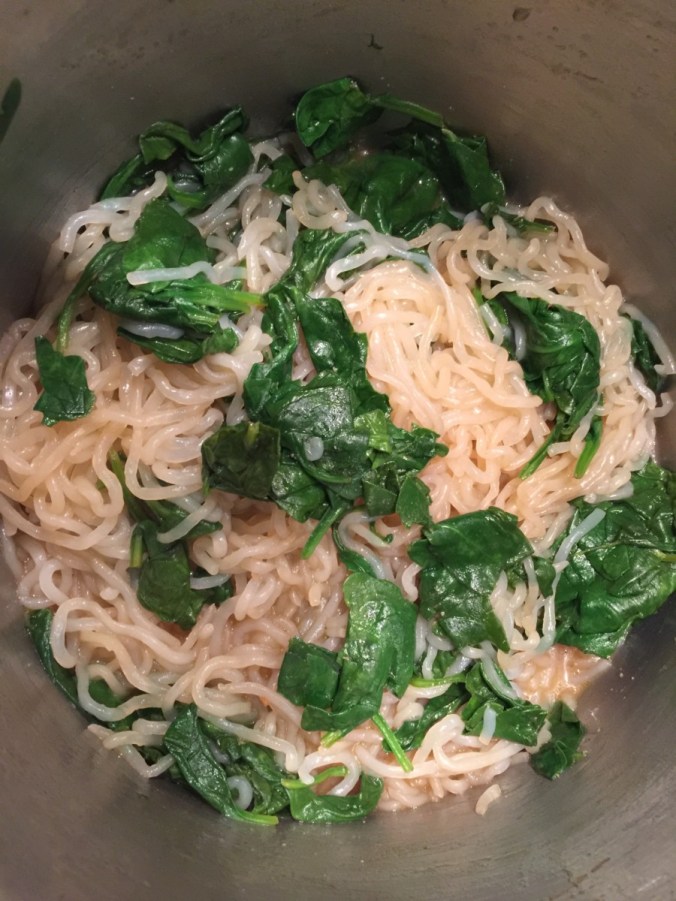 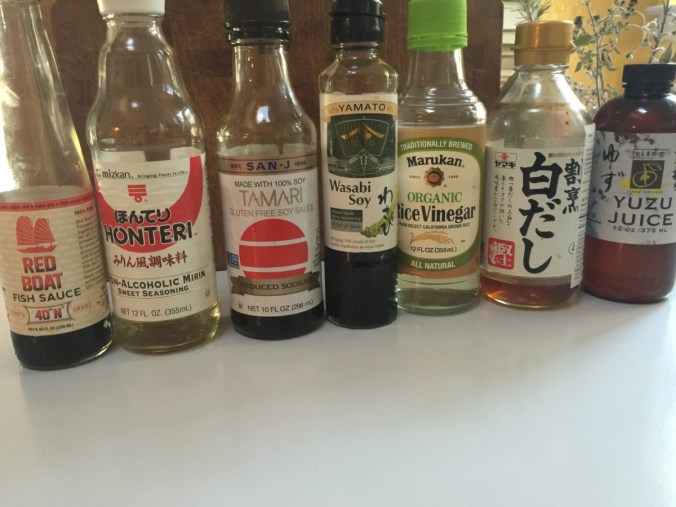 With so many shirataki meals under my belt, which was gradually growing looser, I realized that it would behoove me to find out if this delicious noodle other than weight loss was contributing in any other way to my overall health. Besides, a yam with no calories? Go figure.

To get the info I needed I turned, of course, to the on-line research library. The first thing I discovered is that shiratakis also known as “miracle noodles,” are not made from a traditional yam, but from the konjac root. And secondly, when I found out what konjac can contribute to bodily health I knew that my experiment with shiratakis as well as other foods made from the konjac root was only beginning. 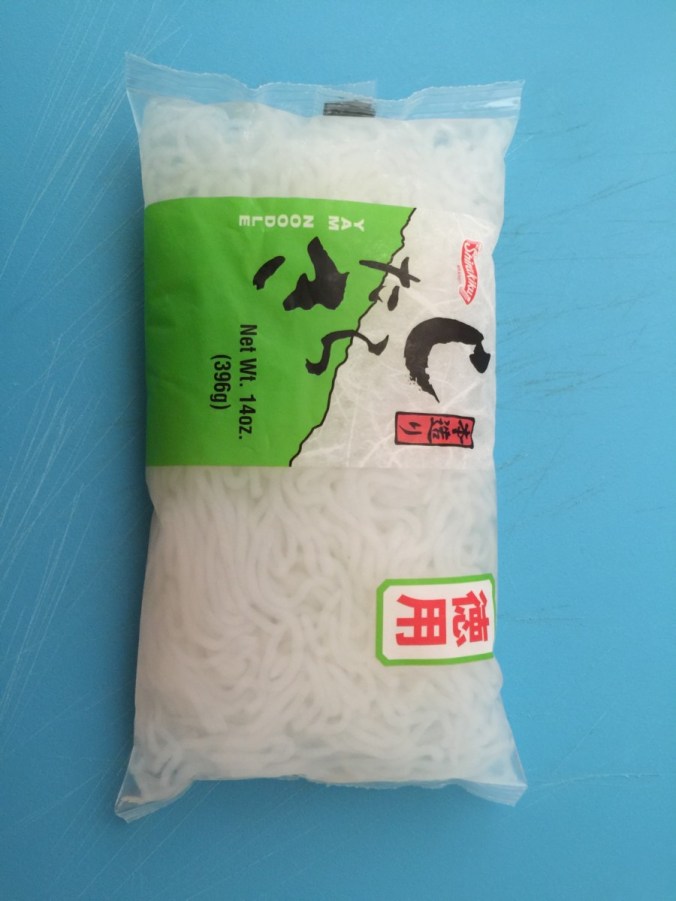 That time of year!