Along side my home in Davis is a ten-acre open field surrounded by a greenbelt. I can walk around the field via the green belt cross the street at the end of the field, walk two minutes further and be on the edge of unbounded space.  I can get into my Prius and do a ten minute drive to a 1500-acre wildlife reserve in which I can lose myself with no companionship other than the seasonal birds that are visiting the marshes. I can drive fifteen minutes in the opposite direction and hide among foothills, lakes and forests. My view of space is formed and formatted by the context in which I live and that context is spacious. I need space not my space, but space in its fullness so that I have the quiet I need to seek and find myself.

In Hanoi, in order to find spacious space the only direction I can go is in.

I cannot find the kind of space I am talking about here in Hanoi nor would its residents unless they live out on the edge of the city near the rice fields. Population, jumbled, crammed living and working sites, and endless interactions define the content of physical space in this multi-million population city. I find no place for space of being or space to be present to the presence of the present. The Hanoi life is a weaving endlessly threaded from one person to another, from one process to another from one thought to another, from one noise to another. Perhaps a little of it can be accessed in the night when things quiet down for a short time, but every morning about five the cacophony starts all over again.

As in Mumbai another over populated city, I am awakened each day by cock-a-doodle-do. This morning the head rooster began at 4:30 and continued non-stop until 8:00. He had a problem; I listened intently, butI could not discern what it was. 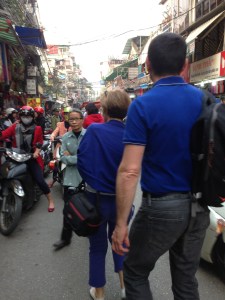 Over the weekend we were driven out of the city to Mai Chau an idyllic valley a world away from the racket and ruckus of Hanoi to visit a famous White Thai village. Long haul to get past the smoggy city. The Grand Hanoi Plaza and other corporate hotels flew past the car window followed by the karaoke district and endless high-rise housing developments. Several kilometers: tall four and five story narrow houses designed in traditional Asian architecture lined the cityscape like a flock of Buddhist temples.  Banana trees followed, then rice fields and herds of grass-feeding cattle along the roadside. Unusual, I don’t know their genus, many had calf’s trotting along behind. The city disappeared to be replaced with villages. Fewer motor scooters, more trucks. Eventually, citrus groves though not like the ones in Florida or California, rather intermittent, open branches heavy with large orange lollypops.

Two hours in we stopped for a short break at one of the many roadside stands laden with the in-season fruit. Served oranges and tangerines as refreshment.  I could see an open living room behind the orange stands. I asked for a bathroom. The conical hatted vendor led me through the living room, past a bedroom, down a hall into the back yard. She pointed to another room. On the back porch her daughter or sister was washing laundry in two big plastic bins getting her water from a hose. At the back of the house down another hall I could see a toilet stall like those I had experienced in India and Egypt, with that squat-over style. I was happy. 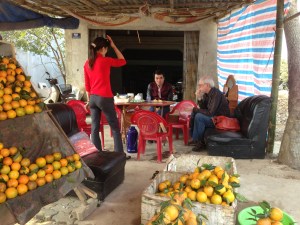 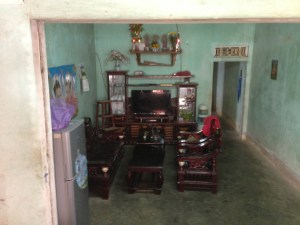 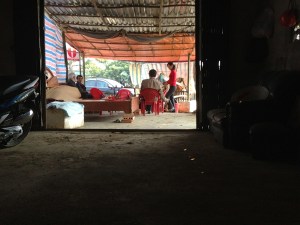 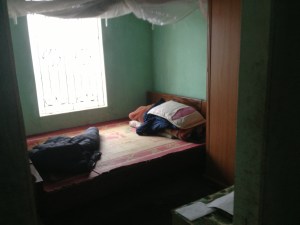 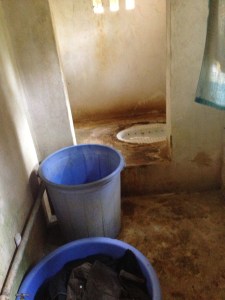 After sucking on oranges we headed on up into the mountains climbing to 3,000 feet before we began our descent into Mai Chau Valley with its squared rice fields, some muddied water, others green or dry undergoing tilling by human hand or machine. Clusters of houses on stilts peppered the fields. Beautiful and spacious!

Two people from the university accompanied us. Son a young lecturer and Mr. I can’t spell his name. He was such a good driver that I suggested to my partner that we hire him when we returned to Hanoi for some touring. When I was told that our driver was the driver for the president of the university, I was chagrined. 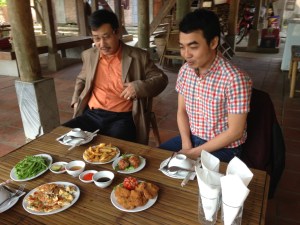 When we arrived in the village of Mai Chau we were taken to a homestay. I liked the idea of staying in the stilt raised home of a local, but it turned out that the bathroom was down a steep set of stairs and on an open lanai. It gets chilly in Mai Chau at night. Next, we were shown our other option: a small hotel next to lush paddy fields. We chose the latter. Following check-in we drove back to the same village home-stay where the owners served us lunch.

View from our hotel room 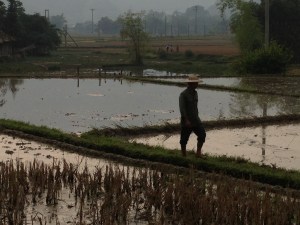 In the north there are fifty-four major ethnic groups and fifty-three minorities. That much I learned a few days before our trip to Mai Chau when I toured the Ethnology Museum of Hanoi. The village that we visited is mainly White Thai. They are distinguished from Black Thai by skin color. Some Muong also inhabit the valley.  The village has been described as a grassroots tourism project. The inhabitants seem quite comfortable with an ongoing parade of tourists walking through the small walkways ambling around their homes. The wooden houses in this area have always been built on stilts, originally because of dangerous tigers. Today, the tigers no longer a threat are on the verge of extinction.

Life in the village 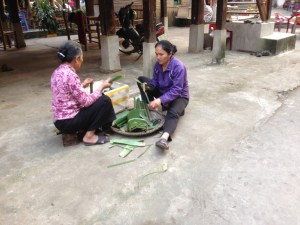 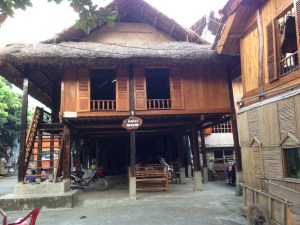 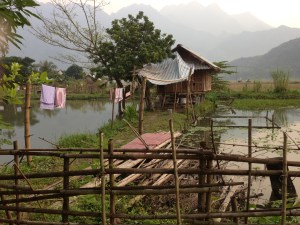 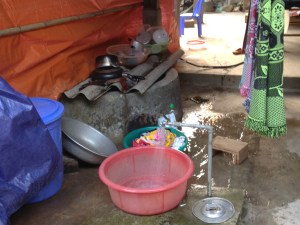 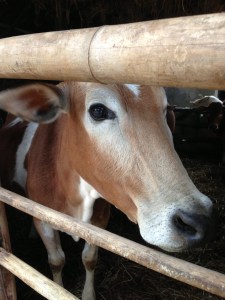 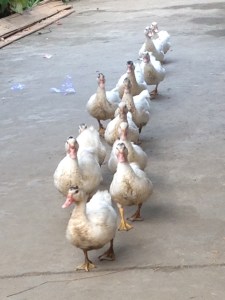 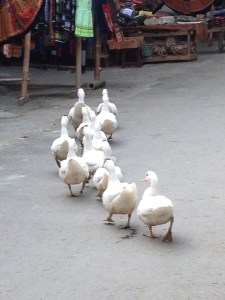 The main craft of the village is weaving. The weavers, mainly women produce traditional clothing, scarves and souvenirs for tourists at low-end prices impressed me. They are a gentle, happy bunch and there were none of the strong-arm sales tactics I have seen in other such places. 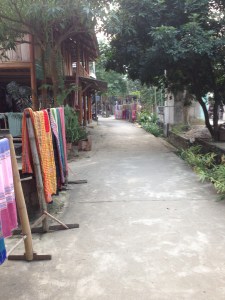 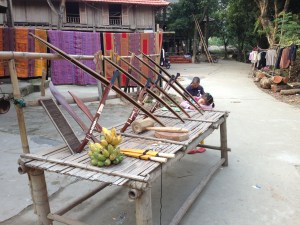 Later, we returned to and rested at the hotel a bit before going back to the village for dinner at the above homestay. After a healthy meal the villagers treated us to a concert and show of traditional music and dance performance. 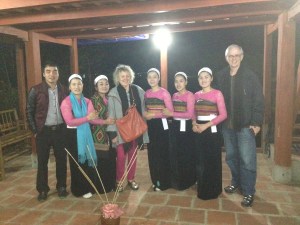 The White Thai of Mai Chau have aligned their entire village with tourism. Surrounded by the miles of open flat fields of golden rice,  they have no place for privacy, no space. Their homes are raised far above ground still it is easy to see from below the inner workings of life in the home.

Although the tour was a gentrified version of a visit to an indigenous group on a  tourist agenda, still it offered a great deal of insight into some of the regional culture.

I cannot help imagining tourists walking around in my living space, in front and back of my house daylong. I would find it disruptive, a constant distraction from my reflections on unbounded wholeness, but the people in the village are  happy with seemingly no bothers about living in a fish bowl or in a space where there seems to be no space.

So, what is the natural state of the human condition? The village, the crowded metropolis, the hermetic mendicant, a bit of each?

The next day we returned to the Hanoi life. 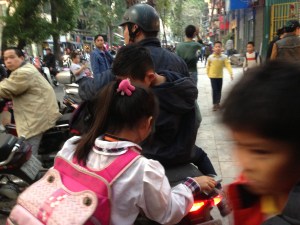 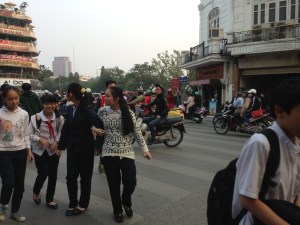 As I sit here in my hotel room in the Old Quarter writing, in the background CNN International  is covering Nelson Mandela’s funeral in South Africa. A copy of the Vietnam Times front page up sits beside my computer exposing an article on the disruptions in Thailand. My I-Phone is beeping with text messages from friends in San Francisco and Los Angeles and my computer is flooded with emails are coming in from all over the world.  In all of this I must remember to make a reservation for dinner tonight at La Badiane a fine French restaurant in the center of the city.