After I returned from Azerbaijan, I could not get Baku out of my mind. As scenes from a long significant dream can fill the morning after with story from the depths of the unconscious, so too, scenes from the trip filled the early days of my return. Streaming colors, sounds, aromas, especially those from the ubiquitous presence of oil, and images of nature-born fires haunted my thoughts. Over the return week I sat in my garden assimilating the experience while gradually getting my land legs back.

Again as in the recent retreat I turned to literature.

To prepare myself for travel to a new place, I have made a habit of reading its well-known authors. Ines of My Soul by Isabel Allende helped to prepare me for a trip to Chili in 2007. Set in the sixteenth century, the story takes place at the beginnings of the Spanish conquest of the Americas. Allende spent four years researching and documenting the history of the founders of Santiago. Against that backdrop the personal trials and tribulations of Ines are recounted along with her challenges with the indigenous Chileans. Bloodshed and violence not withheld. Although Ines’ story took place four centuries before my first trip to Santiago, her history remains embedded in the ancient stones of the city and by the time I arrived in the capitol I had the same imprinted in my bones.

Orphan Pamuk in Memories of the City and My Name is Red prepared me for my first trip to Turkey, Haruki Murakami in several novels for Tokyo, Rabindranath Tagore for India, Jorge Luis Borges for Argentina, Paulo Coelho for Brazil, Octavio Paz for Mexico, Homer and Herodotus for Greece and most of my high school and university literature classes for Ireland and England.

The trip to Baku was so sudden and unexpected that I had no time for such luxury. In hindsight, I turned to Amazon and ordered a copy of what is considered a literary masterpiece.

Ali and Nino recognized as the national novel of Azerbaijan is set in Baku. The author writing in 1918 describes an endearing romance between a Muslim Azerbaijani boy and a Christian Georgian girl. Now there’s a tale to recount. My first thought on hearing the theme of the tale was whether Ali and Nino had to run for their lives to escape a negative response to their relationship. Instead the author portrayed Baku’s tolerant culture. Ali’s father, a noble Muslim, accepts his son’s choice. As it turns out, the major issue with Ali and Nino’s long relationship come when Ali’s friend kidnaps Nino. Eventually, long story short, the two are reunited. When the Bolsheviks recapture Baku, the couple flee to Tehran only to return later. Finally, when the Red Army pulls into Azerbaijan, Ali joins the defense forces and Nino flees to Georgia with their child. Sadly, Ali dies in battle.

I’ve hardly given a nutshell of the complex story, but at least the quick summary will serve to jog my memory in the future. I’ve discovered that astral hyper-looping causes me to become a bit spacy and until I retrieve my land-legs, it can impede my memories ability to recall historical facts.

I also returned to Paul Theroux’ journey as recounted in Ghost Train to the Eastern Star. From Baku, he flew across the Caspian Sea to Turkmenistan, site of the fourth largest natural gas reserves in the world, and landed in Ashgabat the capitol. 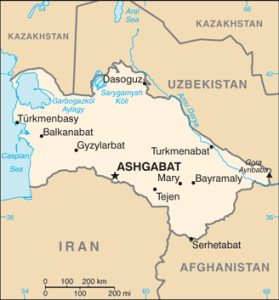 Turkmenistan has been at the crossroads of civilization for hundreds of years yet Theroux’ account of the dictator Sarparmyrat Niyazov and how he ruled the country would turn most westerners off to the possibility of following Mr. Theroux into that part of the world. After his sudden death in 2006, the Turkmens elected Gurbanguly Berdimuhamedow (the only one running in the election) as president. He overturned many of Niyazov’s policies and, not that life has become democratic, but many moves were made to correct repressive rules and regulations.

GB’s photo with the Obamas. From the color of the president’s hair, the photo was obviously taken several years back. 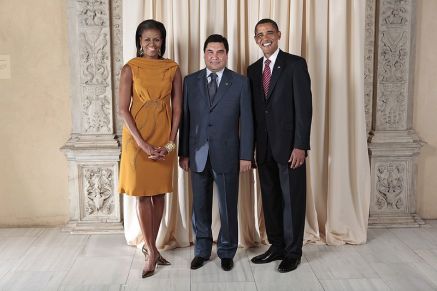 I was surprised to learn that Turkmenistan is the least explored country in Central Asia, but in recent years one site, a natural gas field, appropriately named Door to Hell has whetted the curiosity of tourists.

Another visited site in this land of mainly black sand desert is Turkmenbasy Ruhy Mosque the largest in Central Asia. 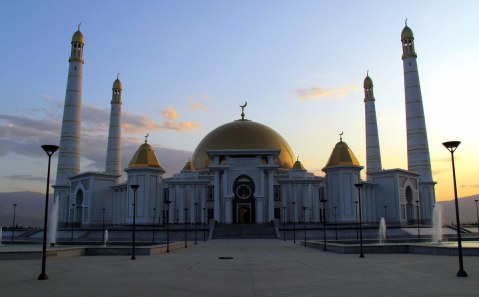 My week ended at a birthday party in Sacramento with a group of wonderful people from Poland. Over bowls of creamy Borscht, we enjoyed conversation and personal story. A few of the group read my blog so Baku intruded briefly into our conversation, but when the hostess spread the table with risotto, potatoes, leek and apple salad and grilled lamb all prepared in traditional Polish style the conversation turned to Poland. My friends  waxed eloquent on the forests, mountains and rivers in the north of the country. They advised me that I should make a trip to the north then head for Krakow in the south.

Never been to Poland. I am hearing the call. Hm……