Sardegna, I did not expect that my relationship with you would require so many posts considering you are but a small drop in the Tyrrhenian. But as I said earlier how could I have known that you would so captivate me? Your trails harken back to the Gaia of antiquity, modernized to be sure, but contained in a cauldron of the ancient. What started out as a wine tour transcended the vine trail and its methods of wine-making. I experienced the flavors, smells and sites of Sardinia along with a history that goes as far back as the people of the nuraghi. Therein I experienced the most ancient Europe.

Gratitude for the mandala:

A smooth flight from Cagliari, Sardegna’s capitol took us across a turquoise lagoon into the navy Tyrrhenian to Bari, city of the legendary Saint Nicholas. The capitol of Puglia rests on the shores of the Adriatic. Tim had arranged for a driver to take us inland to Matera a Unesco World Heritage site and his home. 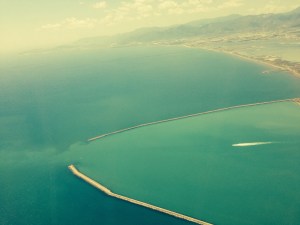 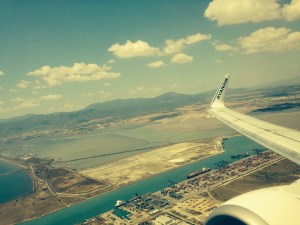 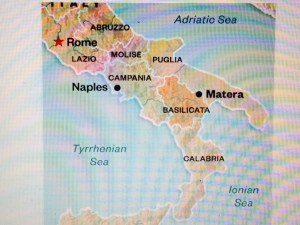 As we drove away from the airport I became aware of an odd sight. Every mile or so an attractive, rather voluptuous well-made up woman stood back maybe twenty yards or less to the side of the road. At first I questioned what these well-coiffured women were doing standing alone on the side of a busy thoroughfare. Finally, the answer dawned: the women were offering a full service business-for truckers and travelers with easy, accessible stops. How convenient! Eventually the stops stopped. And we continued on through a few non-descript towns–nothing to write home about. From the plane we had observed thousands of olive trees dotting the region; they were the nice part of the drive. 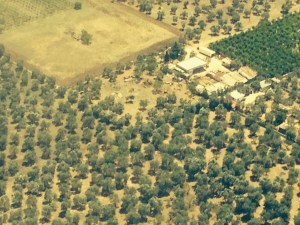 Surprise on arrival at Matera. Tim Robertson, the world’s greatest wine guide had encouraged me to visit Matera for two years. Had I known what was in store, I would have made more of an effort to get there sooner.

Matera speaks of a time before recorded time. I had been told that it is the third oldest continuously lived in site in the world although I have yet to back that up with research. Still, in how many places do people live in the same houses, in this case sassi (caves), as did their ancestors of 9000 years ago? What Mark Twain said of the ancient city Benares, India is also true of Matera. “Benares is older than history, older than tradition, older even than legend and looks twice as old as all of them put together.”

On our approach, the hillside city looked like any other until we curved around the road that looped from the new to the ancient side. We stopped in front of the Hotel Sant’ Angelo that has transitioned from cave dwelling back to Neolithic times to current five star. It would be our home for the next several days. Across the road another hillside pocked with caves like empty eyes stared back at us. The le Gravina stream ebbed its way through the ravine that separated the caves or sassi near us from the empty sassi we witnessed on the other side. 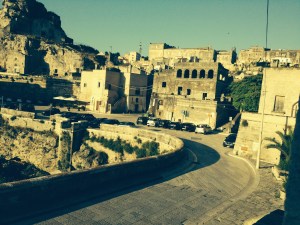 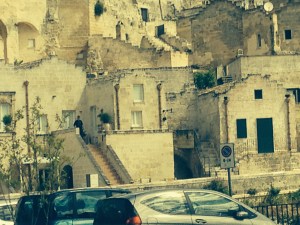 My partner at the door to our room

After settling in Tim came to the hotel to welcome us. We sat out on the terrace off our room soaking up the view (hollow eyes observing us from across the way) and catching up. 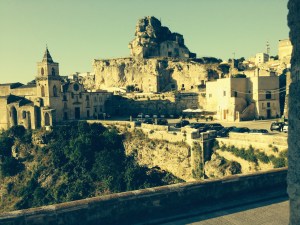 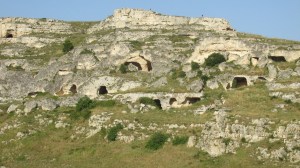 The above sites are divided by the stream and ravine 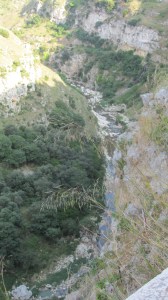 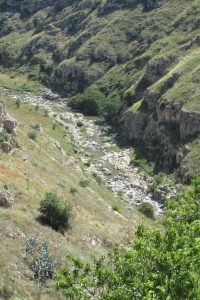 At dinner time we headed up to Tim and Chris’s  place. I was grateful that rather than taking the steps through the old town we were guided us up an easy road that looped around the hillside.

The sassi or settlements in stone caves are dug into the calcarenitic rock that is typical of Basilicata and Puglia. Cavern-like homes built over rooftops of other caverns climb their way up the hillside of old Matera. Stairs form the walking paths that are the fastest way to get up and through the sassi. Tim and Chris’ home is built over the restaurant where we had dinner. “Got tables?” came to mind as I viewed the restaurant from their terrace. Imagine cave upon cave stacked over and upon one another and you will get the idea—perhaps. 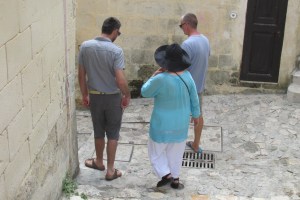 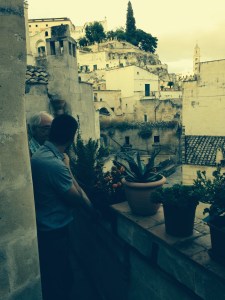 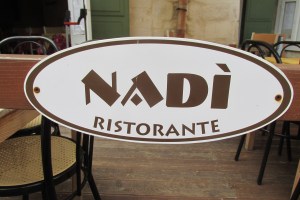 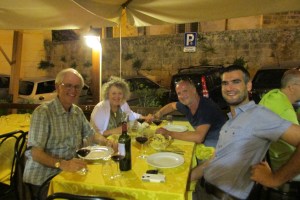 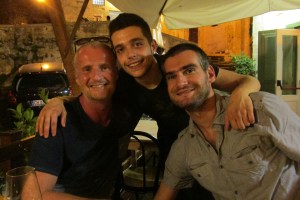 Tim and Chris with the chef.

After dinner we walked back to our hotel and went to bed gazing out the window of our room at the moon drenched sassi across the ravine-stars out in full force. Our original plan to stay in Matera two days changed to five when Chris told us that the three-day festival of the Madonna of Bruna would be celebrated beginning on the day we planned to leave. By lengthening our stay we gave ourselves time for contemplative walks as well as elongated moments of deep connection to our human lineage. 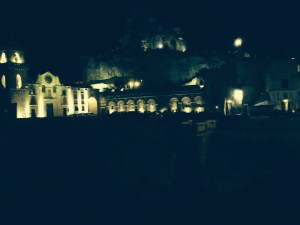 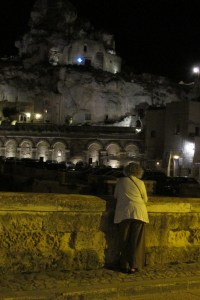 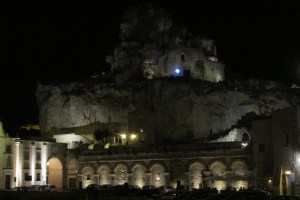 Over more time that any of us can imagine the troglodytes (cave dwellers) transitioned from ancient settlements, to impoverished slums to the sought after place that began its rebirth as late as the seventies through a-rags-to-riches story. In the past people from Matera ashamed of their home claimed to be from somewhere else, but all that has changed. Much of the change evolved with the work of Carlo Levi, author of Christ Stopped at Ebola. In his book Levi implied that Christianity had not gone beyond Ebola near Naples to the south of Italy leaving it a pagan, lawless land. Exiled to Matera by a fascist government for a year in 1945 he personally witnessed a world of poverty and its forgotten citizens. When he revealed the place where where animals and people lived together buried in disease and filth, the legendary story became the disgrace of the nation. In the uproar that followed the embarassed government devised a plan to move all 16,000 people out of Matera.

After the deportation so to speak, Matera would have been abandoned were it not for a group of students who founded a cultural group known as the Circolo de Scarlatta, Circle of Stairs to examine the history, culture and sites of Matera. They discovered an architectural world of rock hewn treasures, 150 churches, some of which had been converted to homes and stables, Byzantine frescoes, and caves seventy five percent of which were not dangerously unhealthy. The rest of the story is the road to restoration. In the late seventies the first cave home was restored and in 1993 Unesco called Matera the most intact example of a troglodyte settlement in the Mediterranean.

I knew none of the above when I arrived. As we pulled up at our hotel I was reminded of our visit to the caves of  Cappodocia, Turkey. My intention to go to Matera to visit a friend turned into a head-spin.

Over the next few days we walked through the dozens of Churches, a museum or two and took a tour with Anne Demay a guide and friend of Tim’s. She showed us a cave occupied until the fifties shared by animals and humans. After a tour of one Church she took us up to the rooftop cemetery. This is Matera, a place where dwellings sit atop one another, churches share walls with cave homes, restaurants nestle under apartments thereby creating a wonderful mosaic of the human condition. 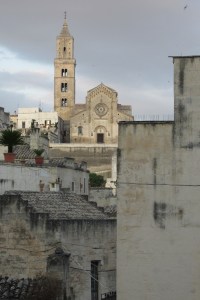 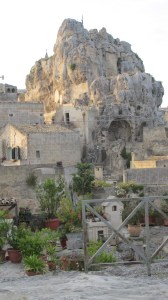 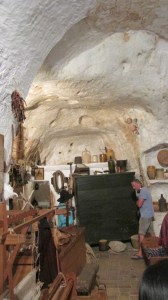 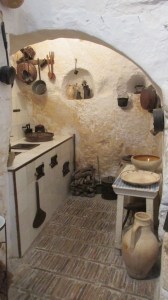 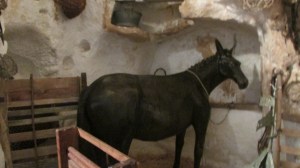 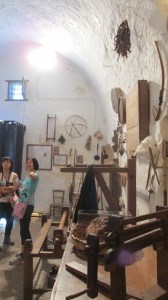 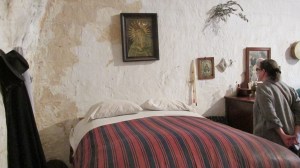 I have been slowly, chewing on the steps of this journey, writing after rather than from the spot as I normally would. The act of leaving one’s personal village to travel so far to another or two comes with so many learnings. Barriers get dissolved, the insignificant begins to pale. In retrospect Matera yielded much fruit for this seeker. More to follow.