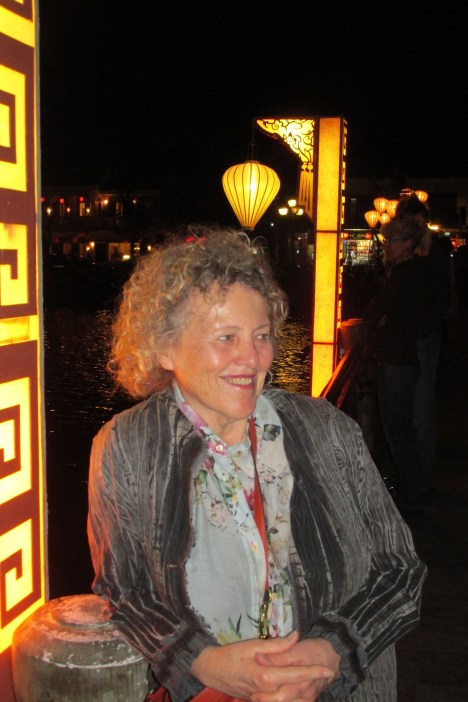 Silence everywhere. Well, not quite, but Hoi an is such a contrast to Hanoi. Can’t get used to the quiet. I thought I had maintained inner silence and space while foraging through the din of Hanoi, but now to my chagrin, I can feel a lingering vibration from the clamor of the ancient city. Hoi an, a UNESCO World Heritage site is balm to my soul. We flew into Da Nang to get here. The Vietnamese pronounce it daNUNG or at least that’s the way it sounds to me. My pronunciation of Viet cities is based on Walter Cronkite’s news reports on the war. 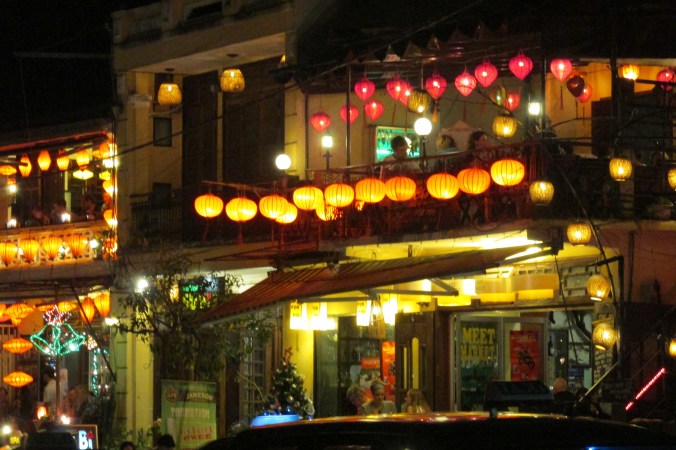 Along the coast of the East Sea in Quang Nam Province, described in the guidebooks as one of the best shopping venues in Vietnam and one of the “best places in the world to have fashionable shoes and clothing made…”  Hoi an. And that’s not all. Once a major port, grand architecture, city of hanging lamps top cooking centers and restaurants make it a must for at least two-three days. I am beginning to sound like a travel guide! One of the best things for me is the lack of pollution, noise and heavy traffic of the larger cities. 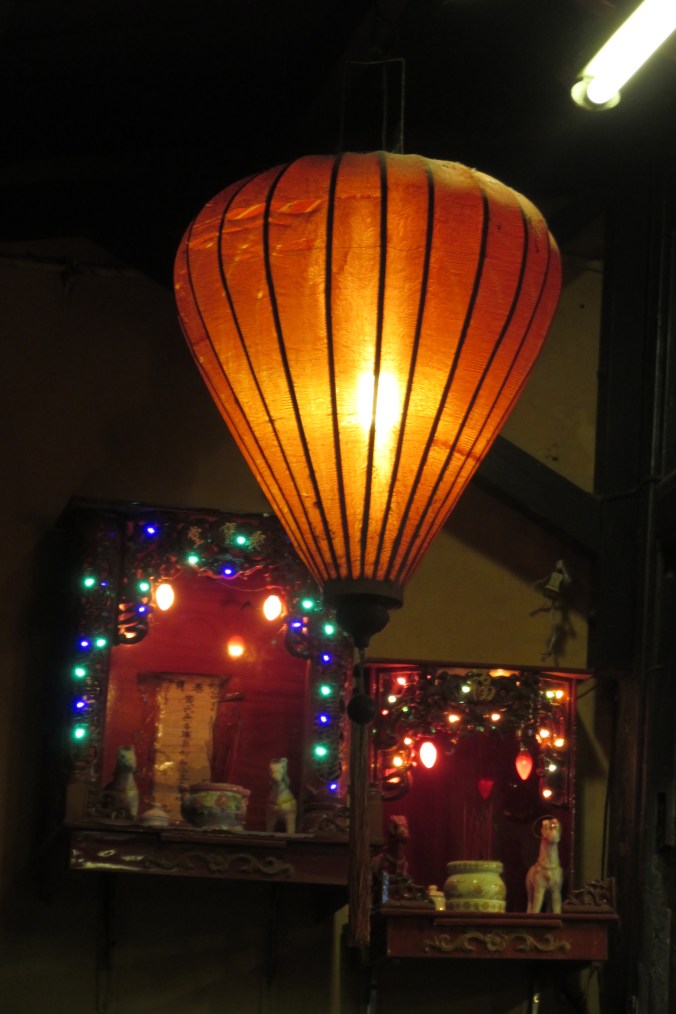 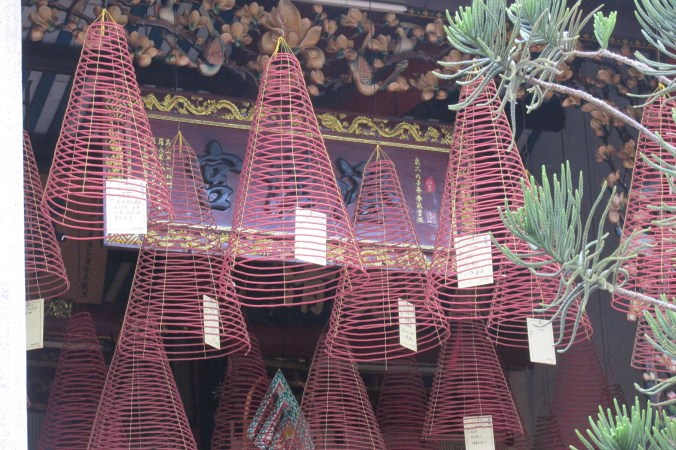 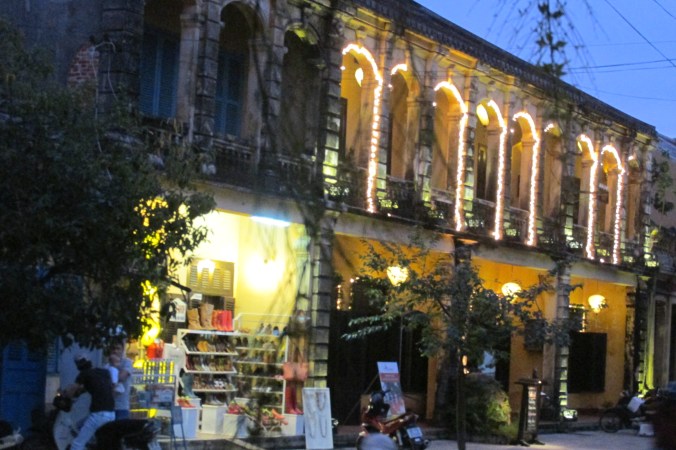 What a beautiful place with more friendly, smiling people. The only problem is the hawker vendors. They are relentless. Even the children and newspaper sellers get into it. Three times I refused to buy a paper from one lad. I finally told him I had a copy of the Vietnamese Times in English. He replied, “I don’t believe you.” Eventually he gave up, continued on down the road on his bicycle. Later he came back our way, pulled up beside me and repeated, “I don’t believe you.”

I had to buy a new suitcase. We went into a shop and were quoted one hundred dollars for one that should have cost 40.00. “No thanks.” As I tried to walk away, the sales woman said, “Name your price.” 35.00. She offered 75. I countered with 40.00. She countered with 65. The bartering continued until I started to walk out. She relented and gave me my final offer of 45.00.  My partner almost left early on. Bartering is so counter to our process, but I knew I had to do it in order to get a fair trade price.

I know so little about the local geography. Just showed up for a few days to relax after the work and long hours in Hanoi. The Ha An Hotel is an old colonial style building with lovely grounds. Service is poor. Never got our mango juice at breakfast and had to go track down the servers for refills. Got used to being treated like a queen at the Golden Sun in Hanoi. 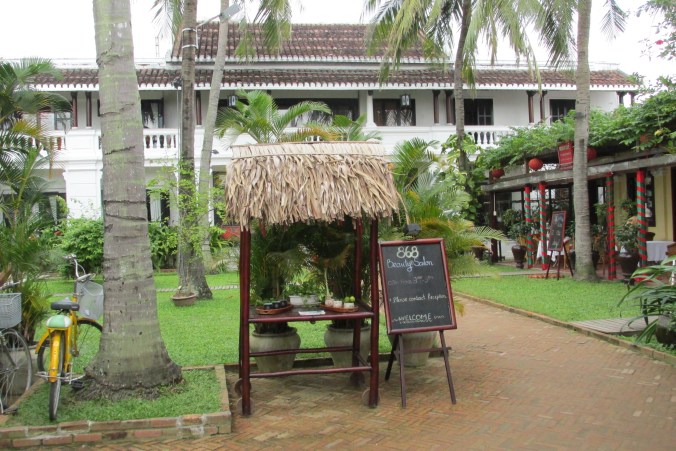 We hired a taxi driver to take us over to the beach –  a ten minute drive, fifteen by bicycle. Every hotel has its own bike fleet. A stretched shore with soft white sand, breezy, dangerous surf, multiple layers of churning foamed waves greeted us. We did not stay long, just wanted to have a look. On the way to and from we passed Betel-homestay where Jen and Henry are staying. Going to see it later today.

When we got back I climbed into a hammock in the center courtyard. Looking up through three dancing coconut palms I dropped quite naturally into a meditation that I learned a couple decades back from a Buddhist teacher.

Gaze up at the sky with unfocused vision. With my vision anchored, not focused, while the trees danced, the clouds glided across the sky, I was taken by the thought of Unbounded wholeness. Later when my vision returned to focus, I noted three coconut palms gracefully waving in the breeze. I noted that one branch center-middle took the lead like a main dancer in a ballet. Like a lauded ballerina she-he moved to and fro, then full circle proclaiming command of the dance. I did not expect to see such magnificent ballet in Hoi an. 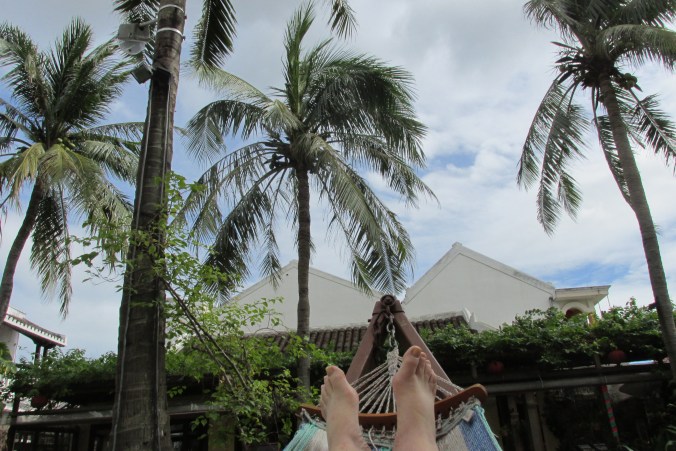 So after dinner at the Cargo one of Ms. Vy’s restaurants, we strolled along the river on the edge of full moon. In October we strolled over the bridge in Lyon on full moon, in November walked along the waterfront under the Oakland Bay Bridge on full moon and now here in Hoi An walked across another bridge, see photos, on full moon. There seems to be a pattern here that has given me pause for reflection. I welcome ideas from the universe as well as from friends.

Women were selling candles housed in paper holders folded into the shape of lotus flowers. We purchased one then placed it in the river in honor of an old full moon tradition as a way to seek prosperity for the rest of the month.  I am reminded of a similar tradition we discovered in Hanoi. Eating dog meat in the first week of the month is done for the sake of having prosperity for the remainder of the month as well. A street devoted  of restaurants specializing in dog meat is popular at this time, we did not make it to any of them—by choice. 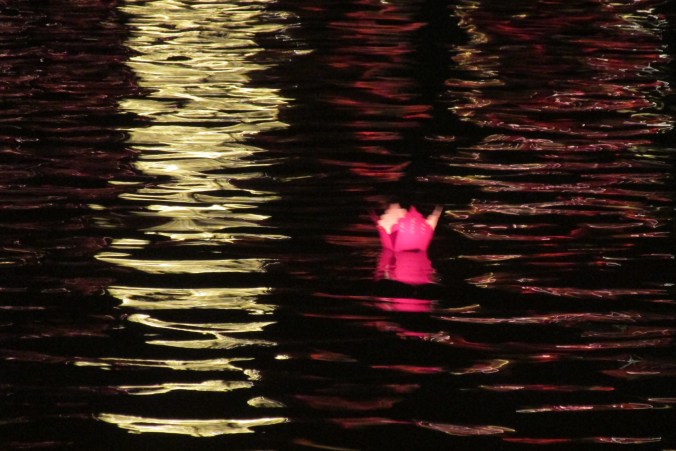 Random sites including a pedicure and  farmer’s market 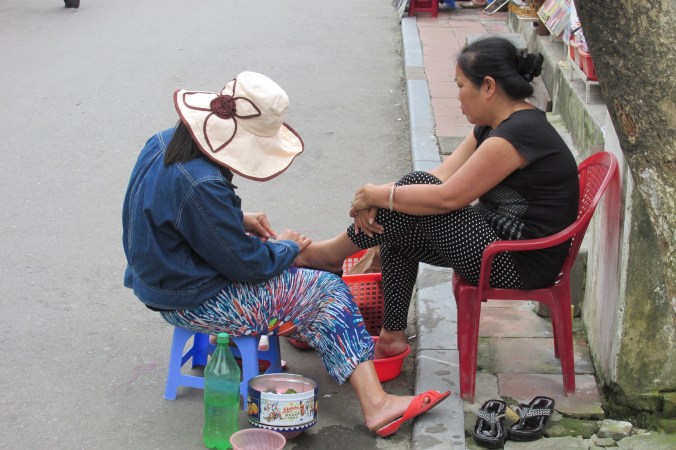 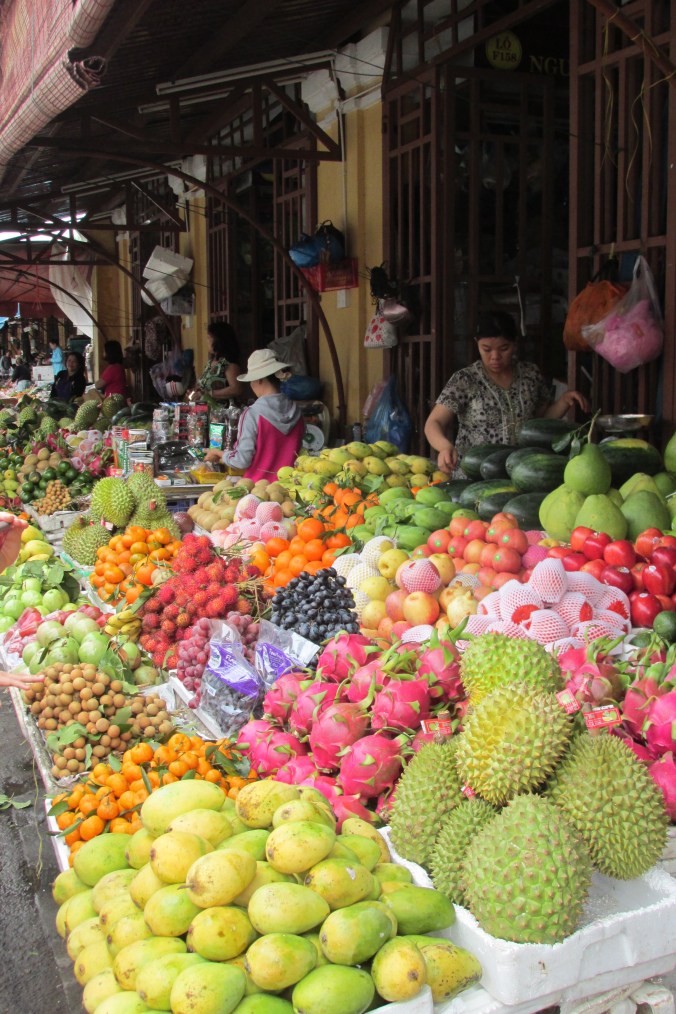 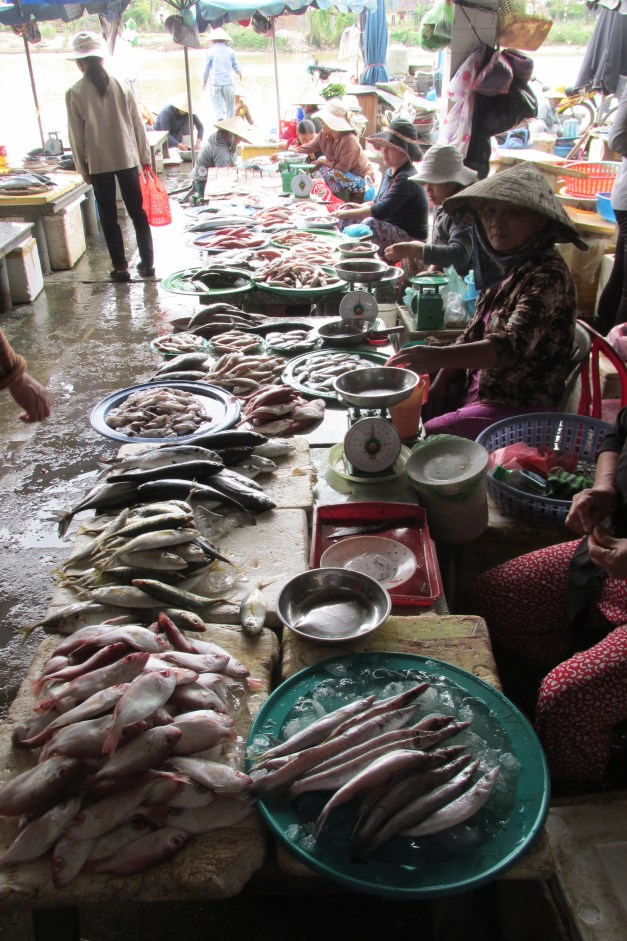 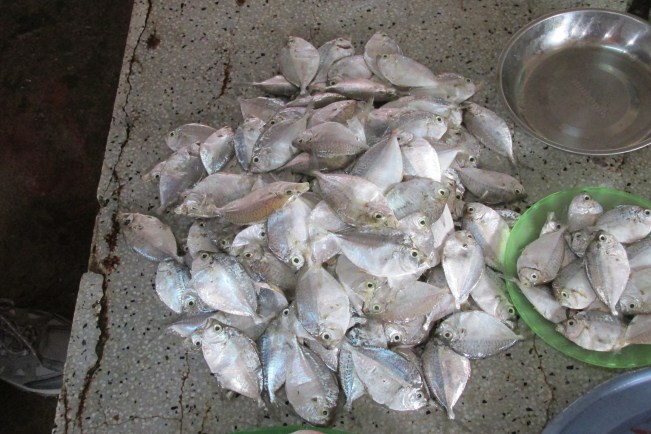 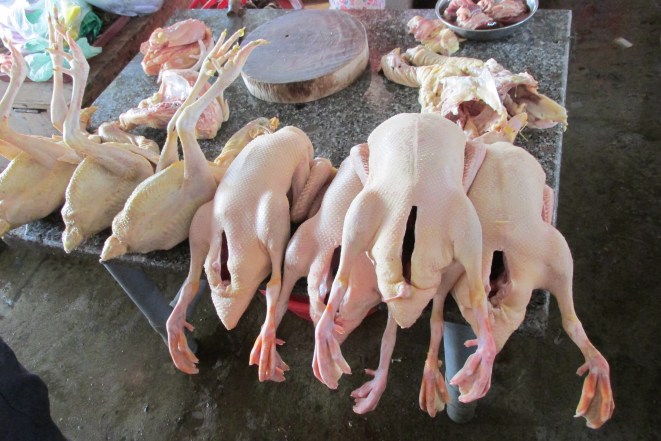 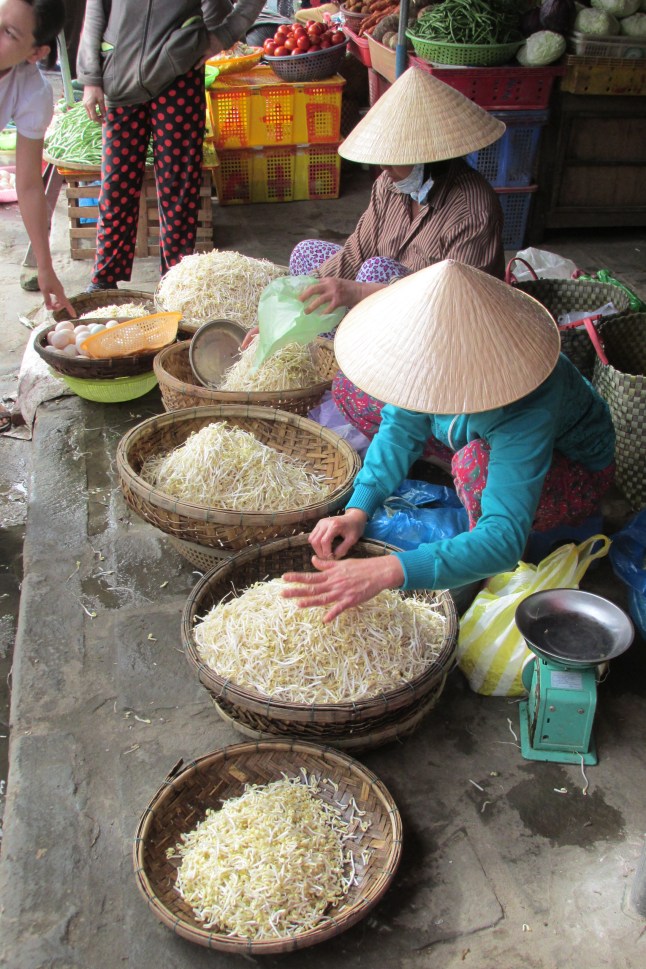