Took off into gray, cloudy skies leaving rainy Hoi an in the dust of our Vietnamese Airlines airbus. My partner purchased our tickets three weeks ago giving us a fifty percent discount from normal price. Full plane. Bottled water, the only gratuity. And the only one I need after last night’s dinner.

We had an invitation to Chef Tu’s home for a dinner cooked by none other than the chef himself. Jennifer and Henry met him on their last trip to Hoi an at one of the cooking classes he teaches at Tra Que Herb Farm. My partner and I hopped a taxi from Ha an out to Betalhomestay where Jen and Henry are staying. Chef Tu sent a driver to pick all of us up.

We drove out to the suburbs of Hanoi through rice fields, rows of street food stalls and into the quiet of Tu’s neighborhood. While he has his own home, Tu’s brothers live next door. They share a common wall. An open window had been cut in the wall for conveniences, but privacy was afforded with wooden shutters.

When we arrived four young boys, cousins, were in the front room watching cartoons. Tu’s wife in the far back room doing laundry or washing veggies, I could not tell which. Tu arrived a few minutes later and went to the kitchen with his nephew and brother. We watched cartoons with the boys. Soon we were invited back to the kitchen (In Vietnamese homes, the living room is the entry room, kitchen is directly in back. Food is generally served in the kitchen) to watch the last preparations for our meal of salads, spring rolls, five spice duck, rice, sweet and sour mackerel, the ubiquitous sauces, and fruit accompanied by red wine from Da laat and Tiger beer.

Tu only stove is a two-burner hot plate. The refrigerator is housed in a bedroom next to the kitchen. The propane tank for the hot plate ran out so the final dishes had to be completed next door on his brother’s hotplate. Dishes were passed through the open window.

A table big enough for four was set up for six, but eight of us gathered round.

Tu shared that he grew up cooking then went to work at the Continental in Saigon for further training. No he is well-known as a chef at the organic herb farm’s cooking school and owns his own small restaurant. His next project is to add a floor on to his own home and create a homestay.

As we have flown, the gray clouds above Hoi an have given way to mounds of cream puffs above an azure sea.  A lady across from me is studying and penciling notes in her guidebook. Lots of Australians on the plane.

Finally, several of you who have been reading my postblogs over the past several trips have taken note of the many manhole covers I have been following around the world. Nothing in Vietnam until the last night in Hanoi. Only one worth shooting ; it is far more artistic in the photo than the real. Wouldn’t exactly win the manhole fine arts competition, but could hold up to those of some countries. 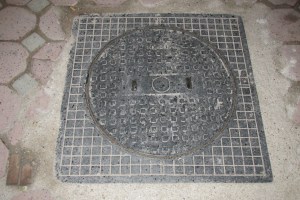