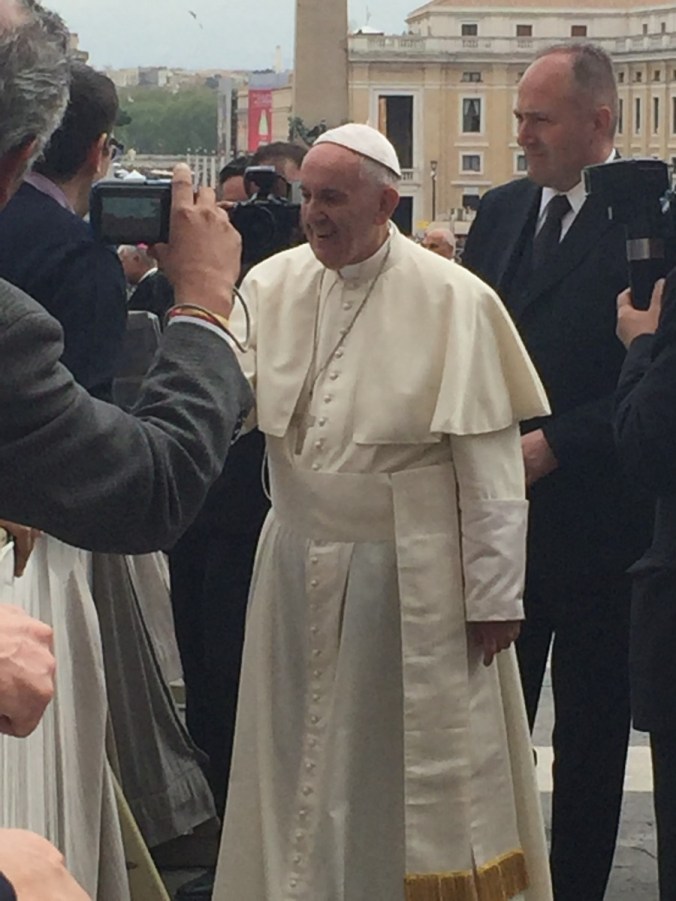 Every time I sit down to write about the trip to the Vatican I go quiet. No words do not a writer make nor do double negatives. The thing that does come up is the site of a smiling Pope Francis as he rode out in his Popemobile, the sound of his gentle voice as he spoke to the crowd and the feel of his hand as he shook mine. And, his face: clear, innocent, childlike.

The latter is what most surprised me about him. A man who had been a cardinal in Argentina, innocent, childlike? Yes. In the full Gospel sense of the words, “Unless you become as children, you shall not enter the Kingdom of Heaven.” The innocence I saw indicated a man who had transcended the ordinary, and whose heart to use the colloquial, is in the right place, right, as described in the teachings of Yeshua.

The meeting at the Vatican was preceded by journeys through, as the Tibetan Buddhists would have it, the heaven and hell realms. My partner and I received an almost last minute invite that described a small meeting with the pontiff. We accepted and planned a trip that included visiting farther than Rome. At the last minute, the plans for beyond Rome beset with obstacles had to be canceled. So much for non-refundable reservations! Then word came from our host in Italy that our meeting with the pontiff would be part of the larger audience planned on the appointed date, but anything more remained a question.

It remained a question until late in the day before the papal audience. Mario our host who had organized the conference we were attending on Solid Urban Waste Management approached me. He told me that only ten people from the conference would be able to meet with Francis and that my partner and I would be two of them. Enter the heaven realms! When I questioned Mario about apparel, he explained that casual is what Francis appreciates. I was relieved that the lace head covering of the past would not be necessary.

So, what is it like to be admitted to a papal audience?

The audience was scheduled for 10:00 AM. We were advised to be there by 7:00 AM. Three hours of going through three security checks with the final like a security check at an airport later, we were admitted to the sitting area. At that point, Mario secured a few remaining empty seats for a couple of members of our group. I began to search for a seat, but it seemed they were all taken. At that point, Mario indicated that the rest of us, we were now down to seven, should follow him. He led us out of the area to the walkway on the margin and proceeded to walk toward the doors of St Peter’s Basilica. I was beyond myself thinking, oh, we get to sit closer to the front. Then we got to the stage area and Mario led us up the stairs. Now, I am more than beyond myself. Several rows of chairs had been set up on the stage around the papal chair. Finally, Mario led us down an aisle of chairs separated from all others and directly in front of the stage on which Francis would speak. I was speechless. 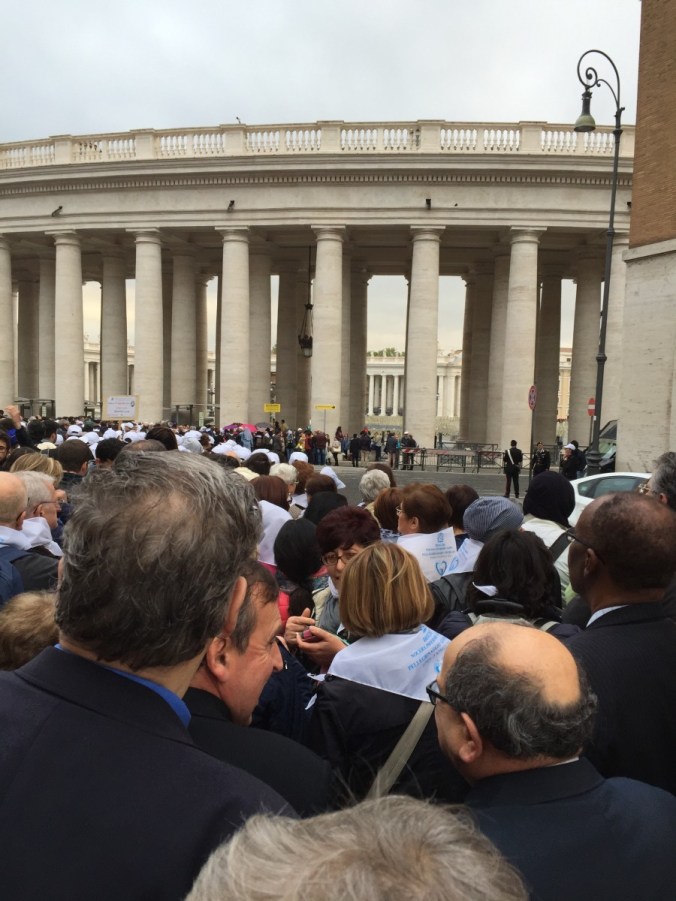 Now, in the heart of the Eternal City I waited for the arrival of a man whose presence, and I mean presence on earth has been felt and acknowledged around the planet. A humbling moment, I felt nothing but joy, love, and gratitude.

I was keenly aware that we were meeting with Francis the day after he had released his new document Amoris Laetitia or The Joy of Love, the conclusion of a two-year synod process in which hundreds of bishops had gathered to discuss the challenges and beauty of family life in the contemporary world.
While waiting I chatted with those around me. I met the young, handsome scientist in our group from Ghana. Paul Connett a scientist from New York had brought a copy of his book The Zero Waste Solution as a gift for Francis. The woman next to me was a part of the Rwandan diaspora, a group of 500 that live in Rome. She came with her son and carried a gift from her group for Francis. She explained that Rwanda has changed, that the killings have stopped, but all seven of her brothers and sisters have remained settled in Rome. I was reminded of the current migration problems and that Francis would soon be heading to Greece to visit some of the migrant camps. 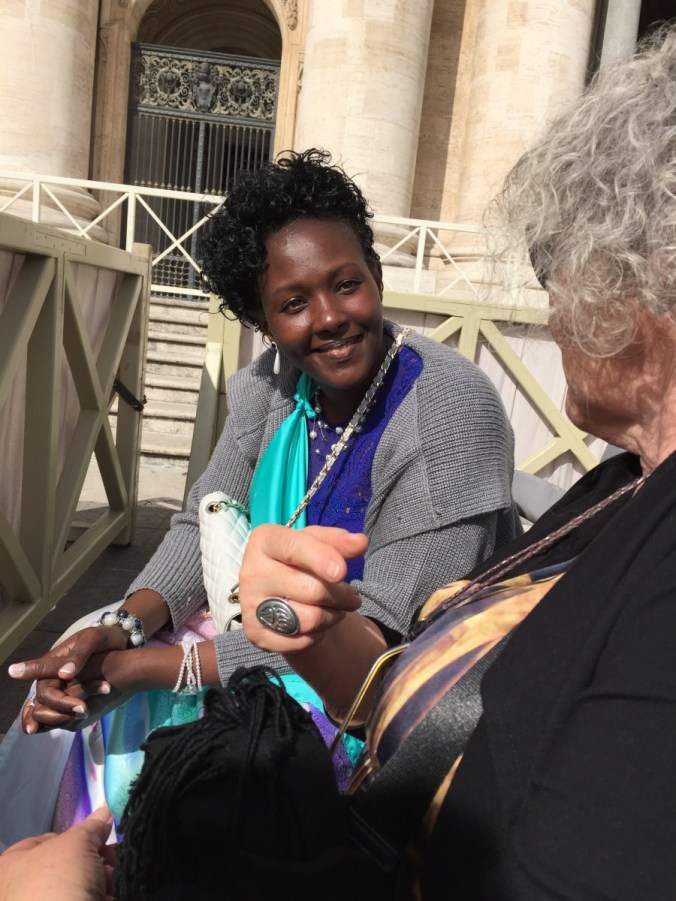 Across the way, a wedding couple waited to have their marriage blessed. Clerics gathered and chatted as they, too, waited to meet with His Holiness. Although out of my sight I could hear a group of musicians playing upbeat and well-known pieces from various cultures. The famous Swiss Guards standing at attention seemed more decorative than officious. Representative Vatican hosts and guides dressed in full tuxedos gathered intermittently about the stage communicating about the proceedings. 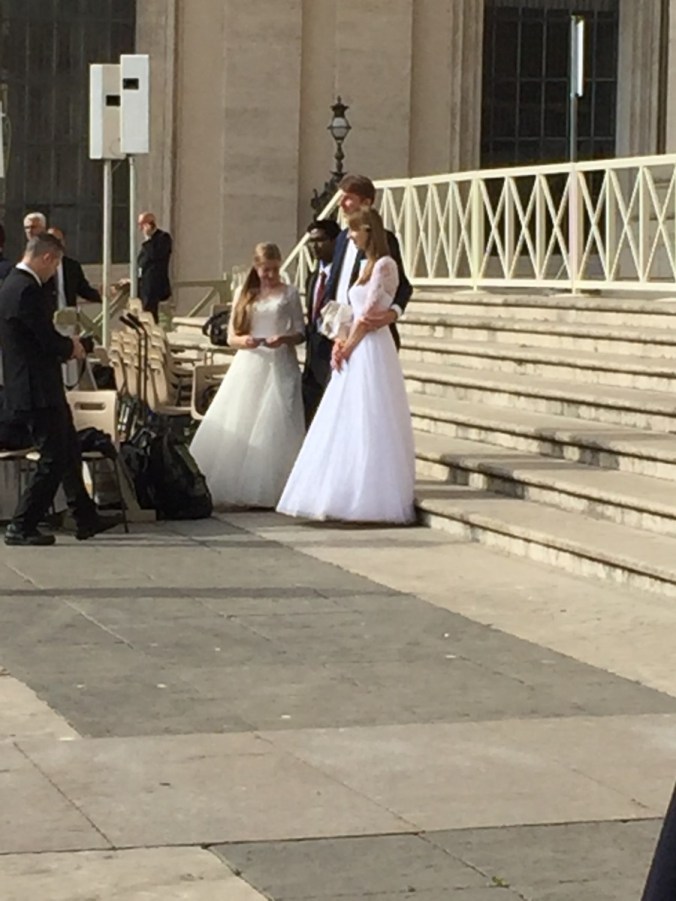 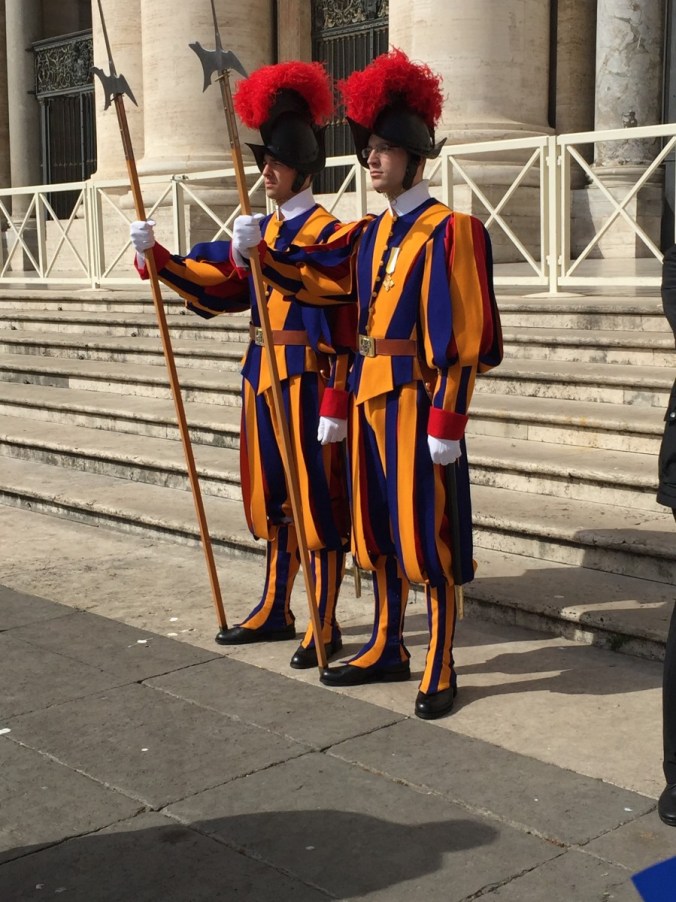 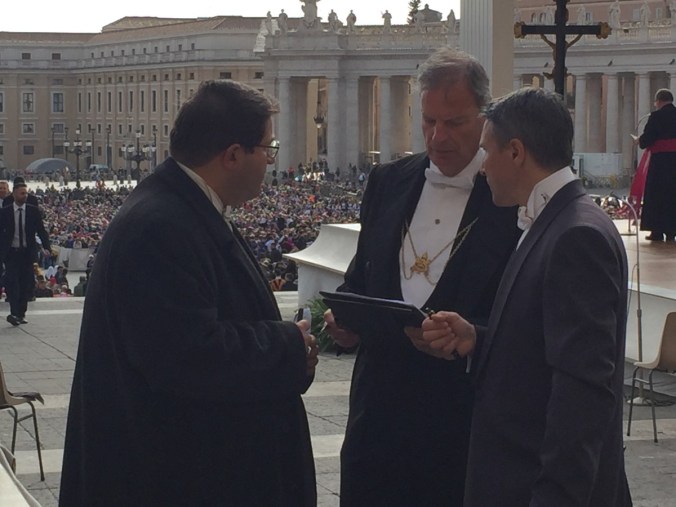 The sun came out, intermittent clouds scattered across the sky. The question, “had I died and gone to heaven,” took on a whole new meaning.

When some of the crowd of 10,000 people began to cheer, though I could not see him, I knew he had arrived. I stretched and strained trying to get a glimpse, but not until the Popemobile moved to the center of the crowd did I get a sighting. His driver slowly drove him up and down the margins, the aisles, the centers while he smiled and waved. All 10,000 of us were aware of his presence, even if we could not see him.

Before long he came up the stairs, walked around to the back of the stage, climbed a few more stairs and approached his chair and sat down. Preceding his talk a number of clergy welcomed the pilgrims in various languages. The people from the Solid Urban Waste Conference were warmly welcomed in English. 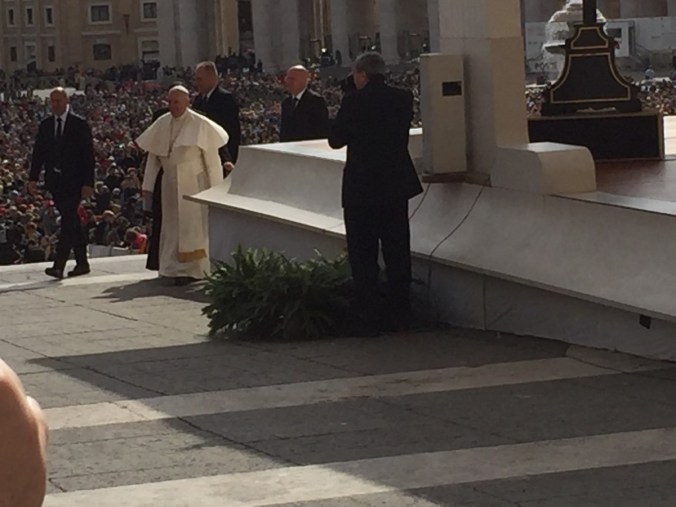 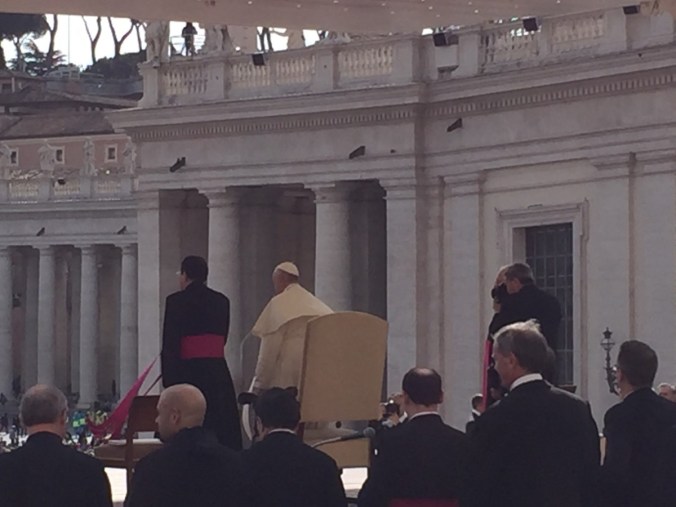 More than surprised by the soft, gentle voice, I listened intently to what Francis had to say. My knowledge of Italian is limited, but I got the message through his tone. His talk was short and to the point.

After, he walked down into the crowds briefly, then climbed back up to the stage and greeted the clergy who had also come to meet him. Finally, he walked to the end of our line of twelve to fifteen seekers. Long story short, we had been selected out of a gathering of approximately 10,000 people for an intimate, personal exchange. He smiled, extended his hand, clasped each hand firmly, greeted us warmly and did a little chatting. 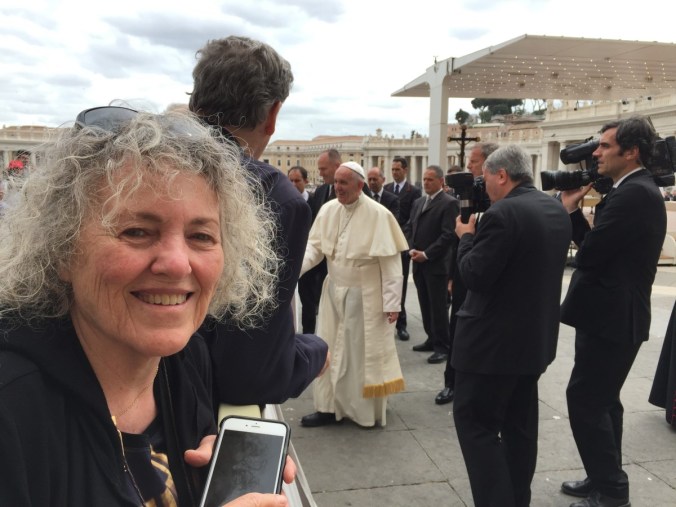 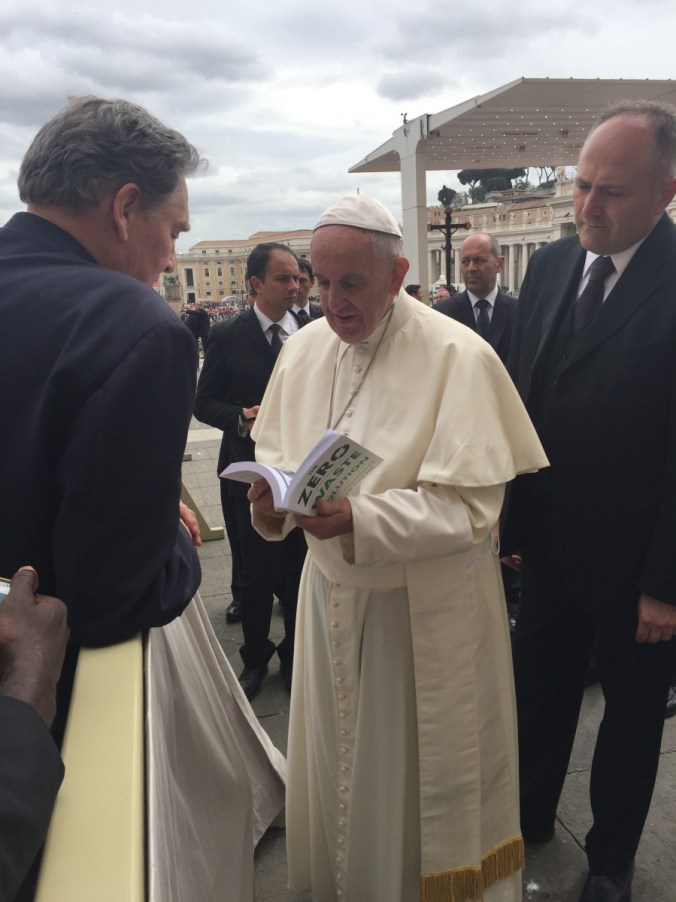 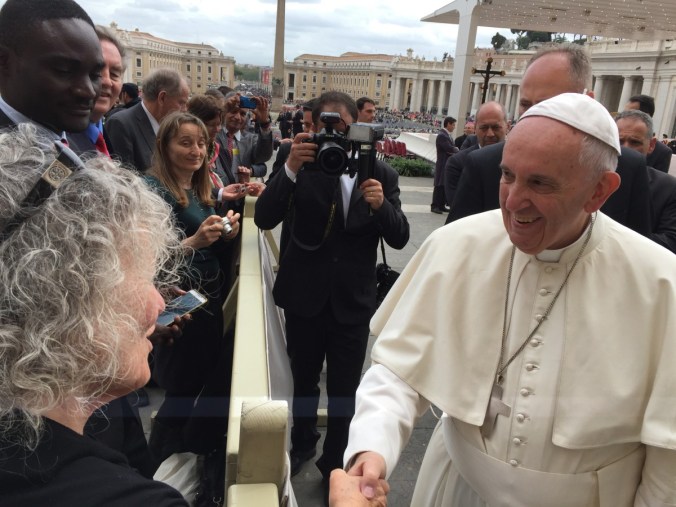 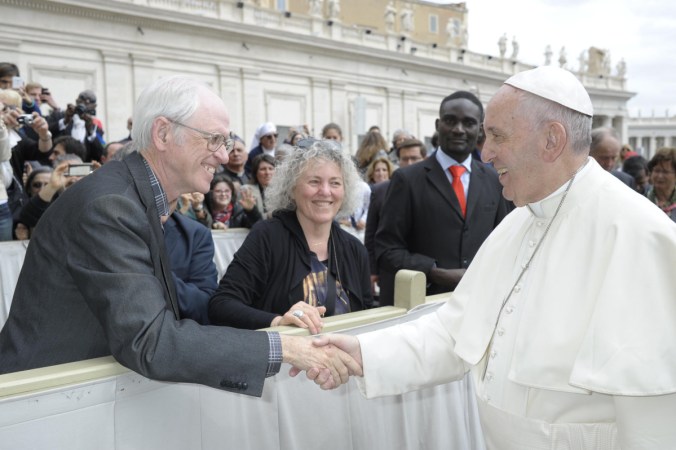 When we came face to face I was so struck by the face I described above that tears came. Again speechless, thank you was all I could say.

Everything Else, Ritual, Spirituality