A warm day greeted me as I disembarked. The flight to Rome was as smooth as one could hope for, but I must remember to take food on future flights with AA. When my vegetarian meal failed to materialize, the flight attendant offered me a choice between tortellini and chicken. I chose chicken though I do not eat chicken because the plate had a few veggies: overcooked green beans and carrots heaped on mashed potatoes. Apart from the entre, the rest of the meal was made up of white flour carbs, a Velveeta style cheese, and a high sugar brownie. Unappealing and unhealthy! American Airlines, you should be ashamed. Thankfully, the food in Rome is more than making up.

My partner had arrived from Wuhan, China where he had been teaching for a few weeks three hours earlier. As I walked through the exit I wondered why no guard was on duty to check my passport. In the chaos outside the gates, I found my partner. He realized that I had passed through the gate for EU citizens rather than the one for foreign visitors. So does that mean I am in Italy illegally? Now I truly understand how it feels to be an illegal!

In keeping with the spirit of the journey, and in anticipation of the audience with Francis, the Donna Camilla Hotel felt like the perfect place to stay. 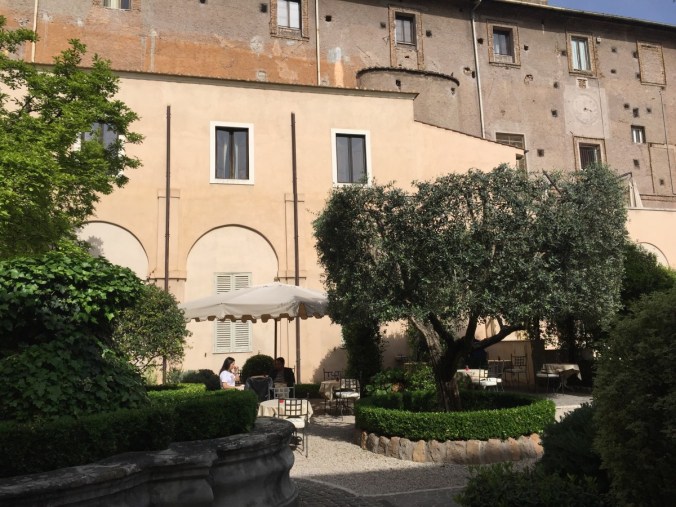 We knew it well as we had stayed there on two previous occasions. A former convent transformed into a hotel, it retains the architecture and feeling of a monastery. Additionally, a wing of the buildings was maintained as a convent for the remaining Augustinian nuns and the entry to the hotel houses a chapel in which Mass is celebrated daily. Having stayed at the Camilla previously, I knew it how soothing and quiet it is after a hectic day in the famous historical areas of Rome where hundreds of tourists continuously hound the streets. 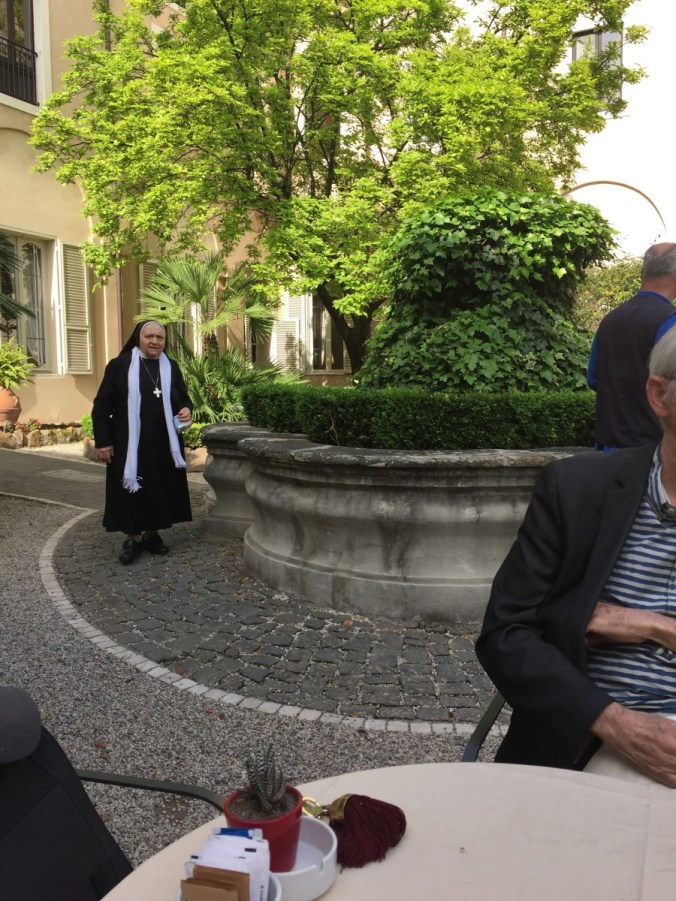 We counted nine Churches in the view from our window. 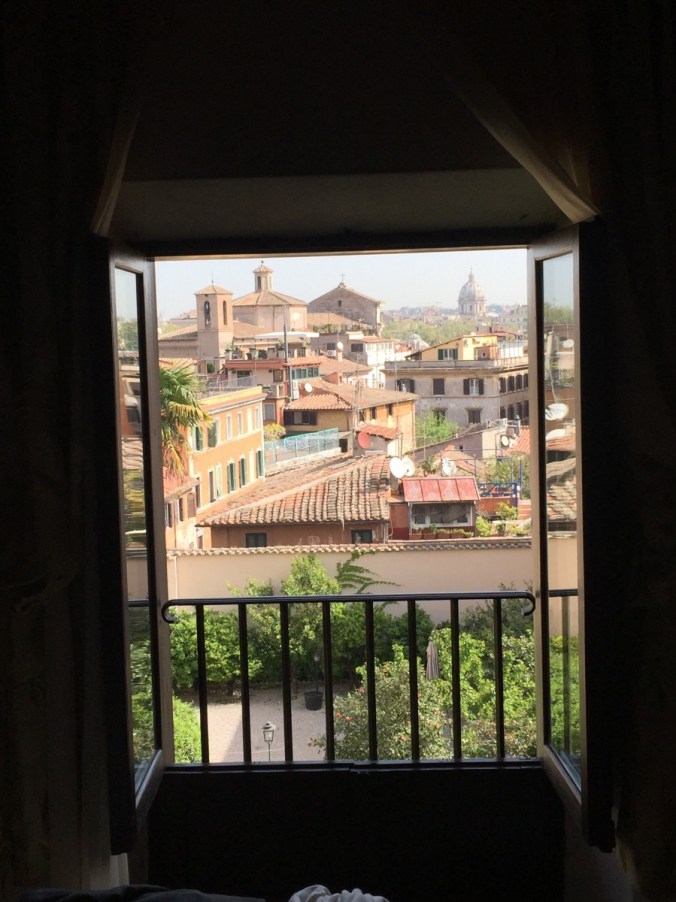 Having made several previous trips to Rome I did not feel called to revisit the renowned familiar sites, but wanting to know more of the city in depth I decided to wander through its cobbled stone streets by way of coffee houses. Is Italy not the country that inspired Howard Schultz? The latest news has it that he is finally about to land the first Starbucks in Rome.

As I meandered, they would serve as wayfarer stations offering me a place to rest and write. After the long almost sleepless flight, it was important to insert lots of rest stops into the first few days. In preparation, I copied lists of popular Roman coffee houses onto my desktop. I had two days before the conference, more than enough time to make headway down my list of notables. 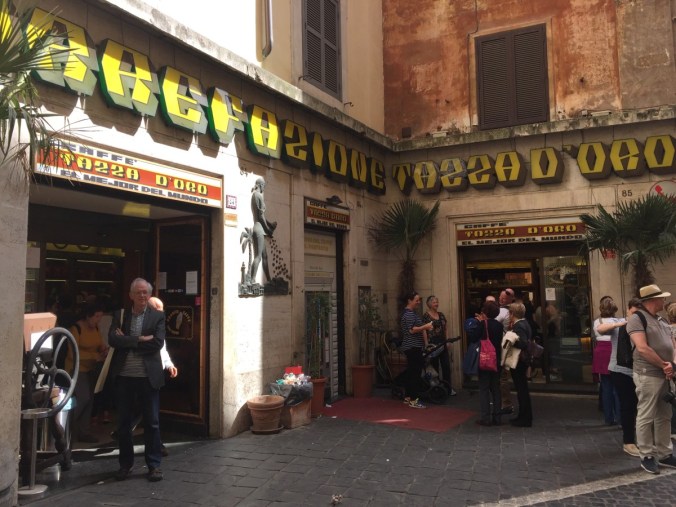 With Tazza de Oro open since 1946 claiming to be the best in the world, I had to find out how it stood up to Portola Coffee Lab, my favorite. The crawl through the streets would take us right into the historical district and into the hordes of tourists and student tours taking advantage of April weather. I cannot recall seeing quite the kind of roasting room in Italian coffee houses as Tazza’s.  I found out they roast and send beans to as far away as Australia. 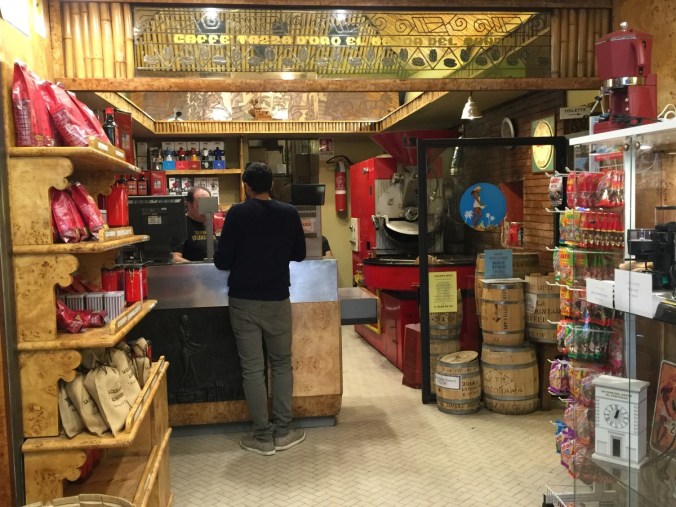 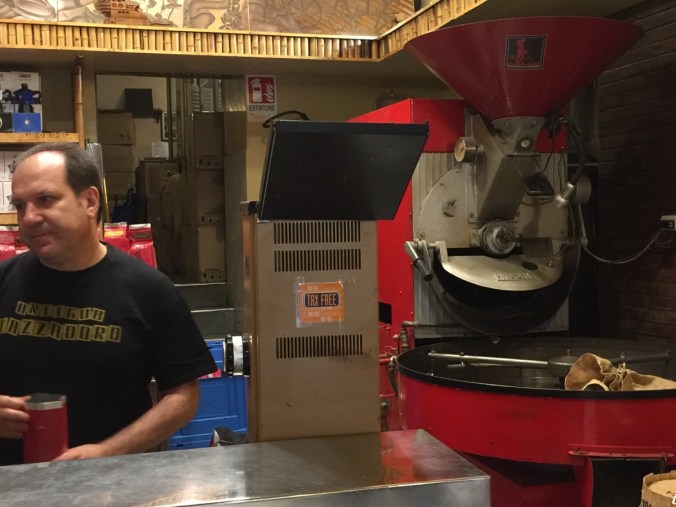 To get our coffee we had to get in a long line to buy our coffee “ticket.” Once we got the ticket, we got in another line to the barista. 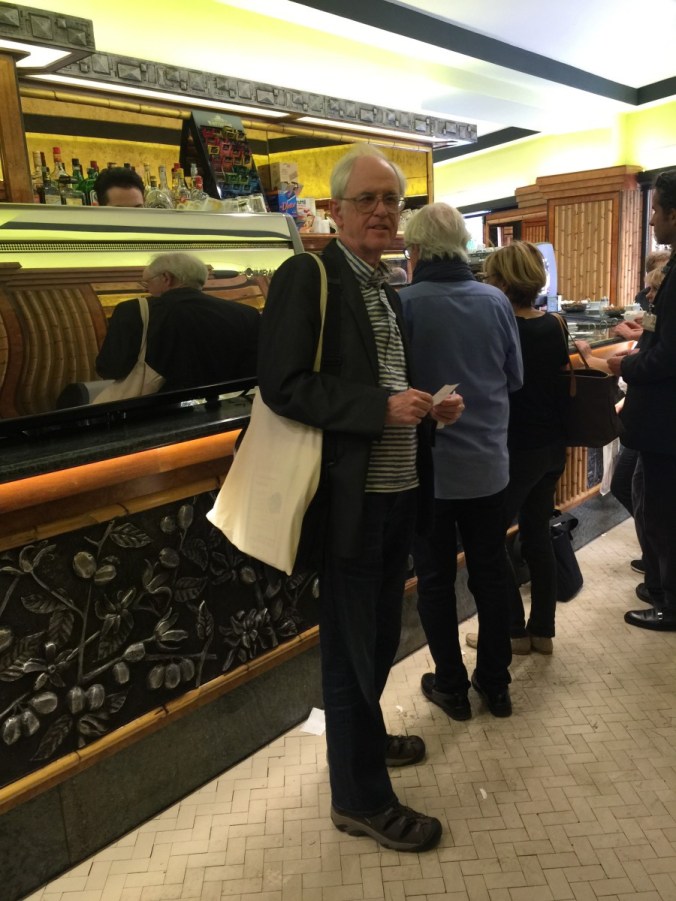 There were no cozy tables for sitting and writing only a bar and a room with coffeeholic’s stacked on top of one another. After drinking the new world style that has come to dominate American coffee houses in the past five years I realized with my first sip, that I had grown away from the Italian style espresso of Tazza. However, still good by Italian convention as well as my partner’s palate! For me the best of all, literally standing in the shadow of the Pantheon while sipping reminded me that I was but a pilgrim along an ancient roadway.

Interesting factoid: Tazza roasts and sends beans to as far away as Australia. 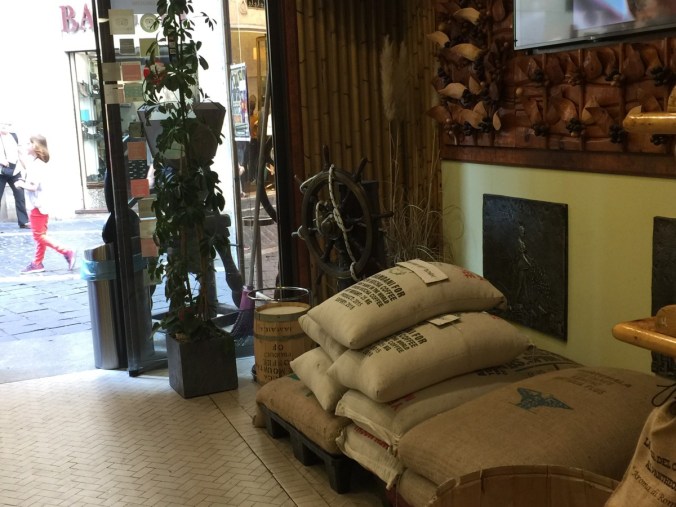 Once we purchased our ticket, we got in another line to the barista. To my dismay, there were no cozy tables for sitting and writing only a bar and a room with coffeeholic’s stacked on top of one another.

After drinking the new world style that has come to dominate American coffee houses in the past five years I realized I had grown away from the Italian style espresso of Tazza, but, good by Italian convention! Best of all, literally standing in the shadow of the Pantheon while sipping reminded me that I was but a pilgrim along an ancient roadway.Before moving to the next signpost, we stopped briefly across the street at Venchi’s.

Before moving to the next signpost, we stopped briefly across the street at Venchi’s. 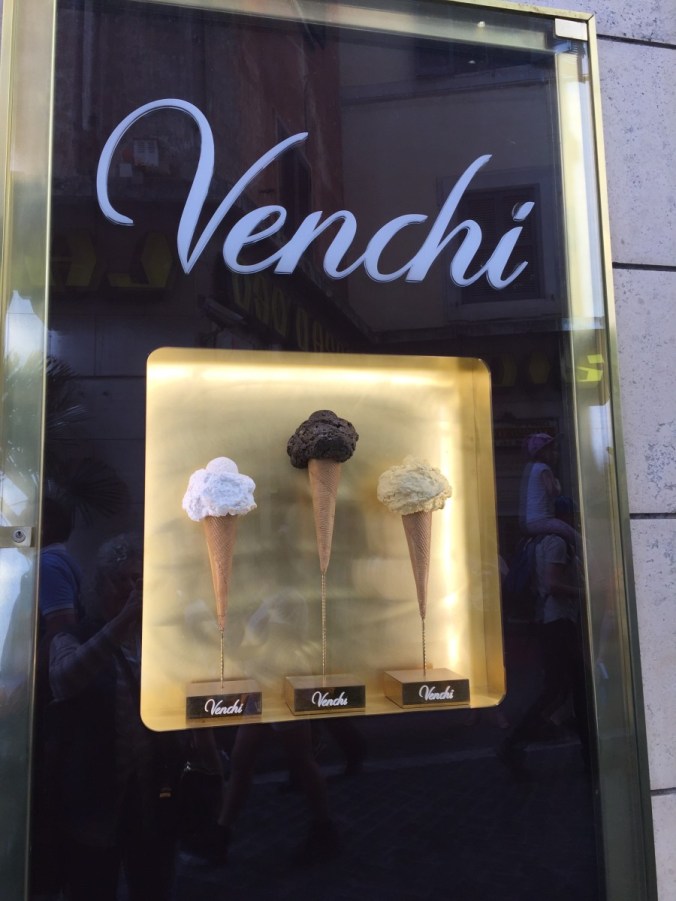 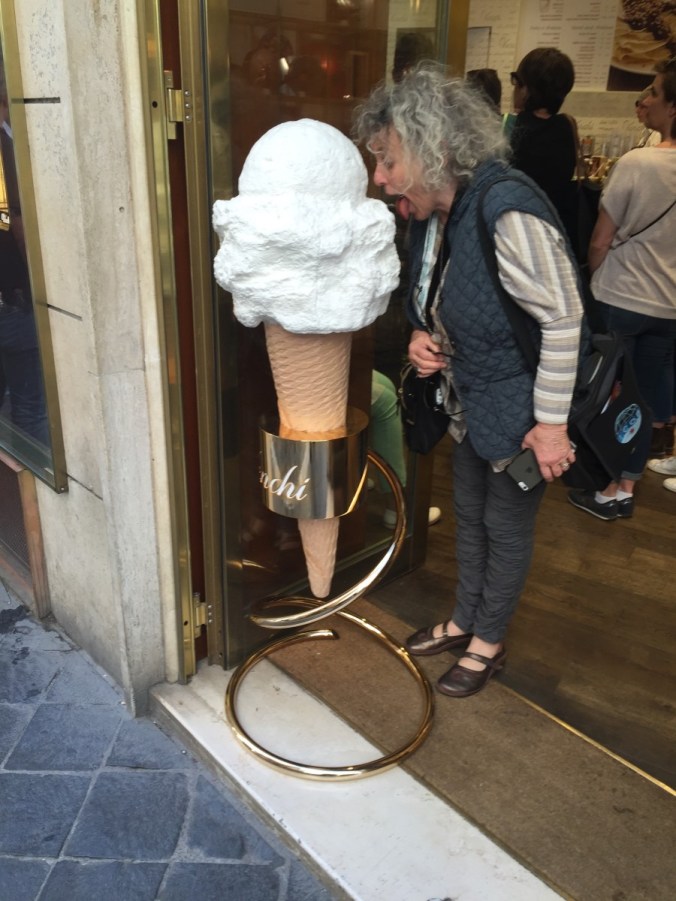 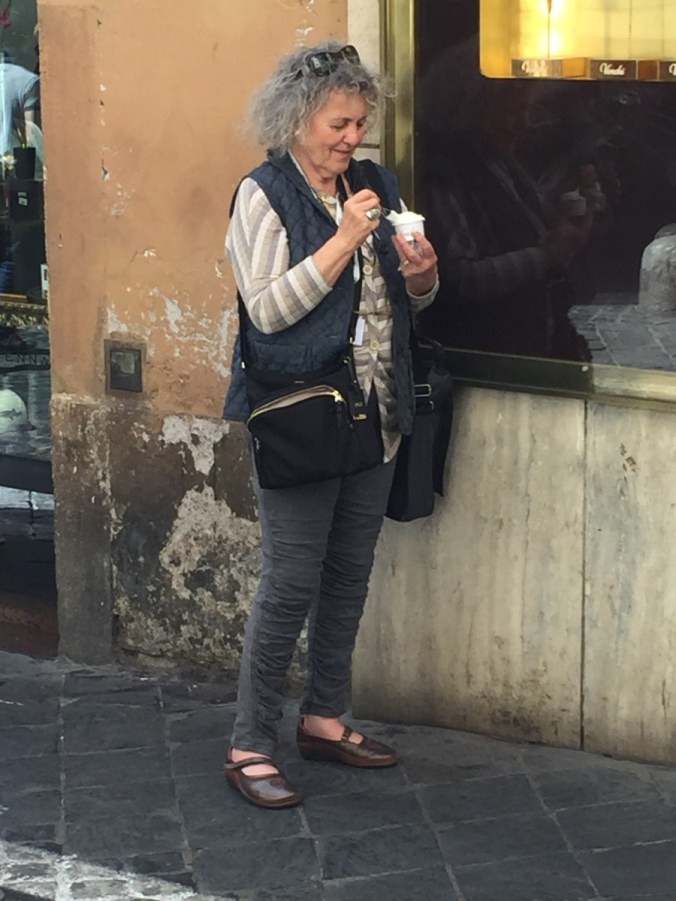 Older than Tazza, founded in 1930, Café Sant’Eustacchio serves some 6,000 cups a day. Once again we got in line, bought our tickets and preceded to the barista. Again, no tables for writing, only a bar at which to stand, if there is enough room! 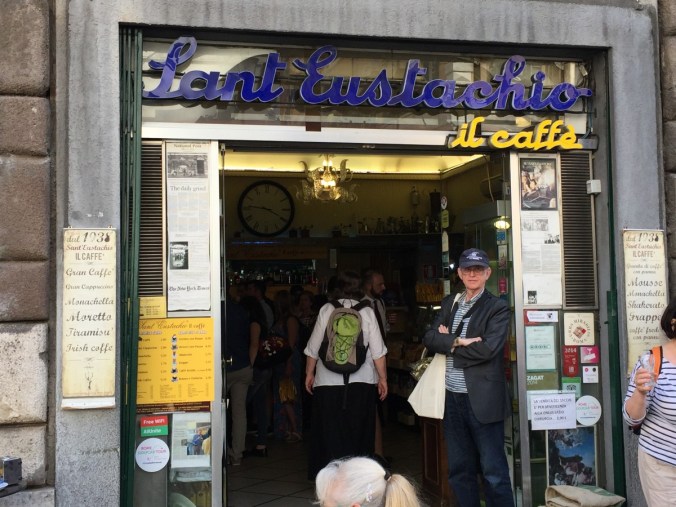 Perhaps Café Greco, third on my list of notables,  would offer the respite I wanted. To get there we continued to make our way through the high-end shopping district along Via Condotti. Walking along, a sweet window display caught my attention. 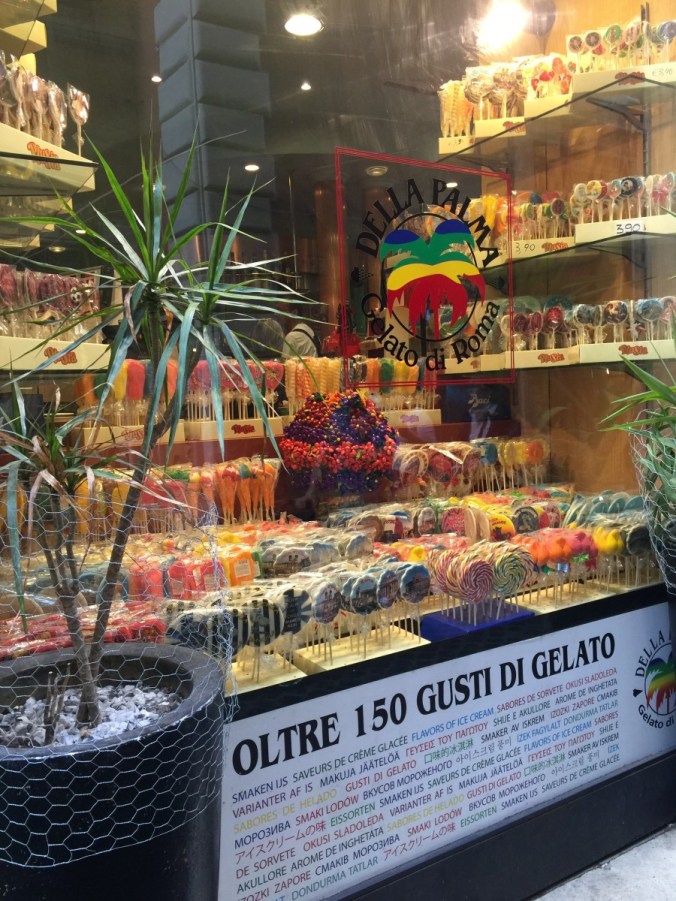 But I was more taken by the following. 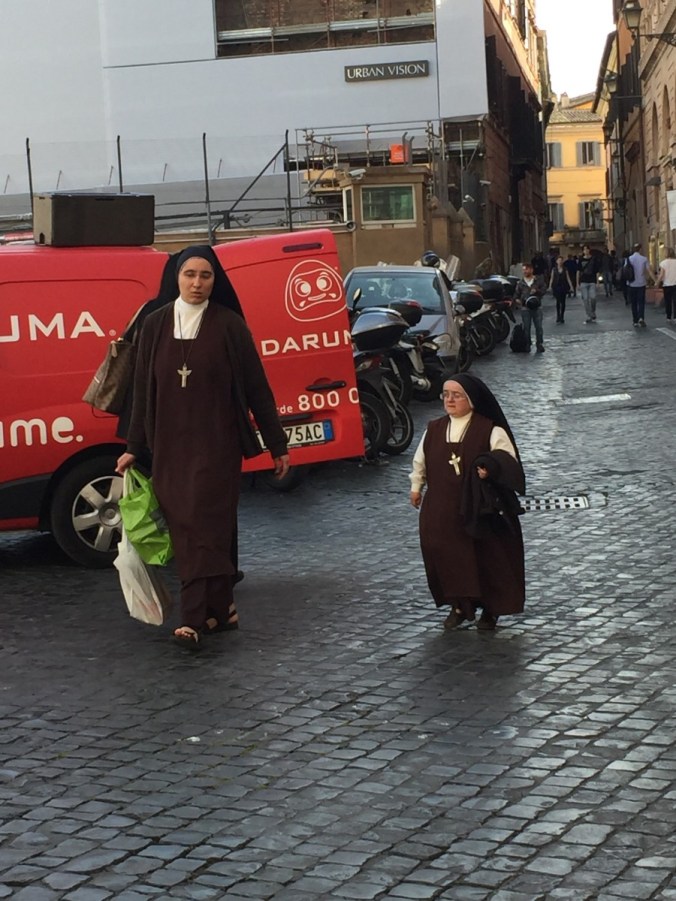 We passed by  Cenci housed  in half a block long building. 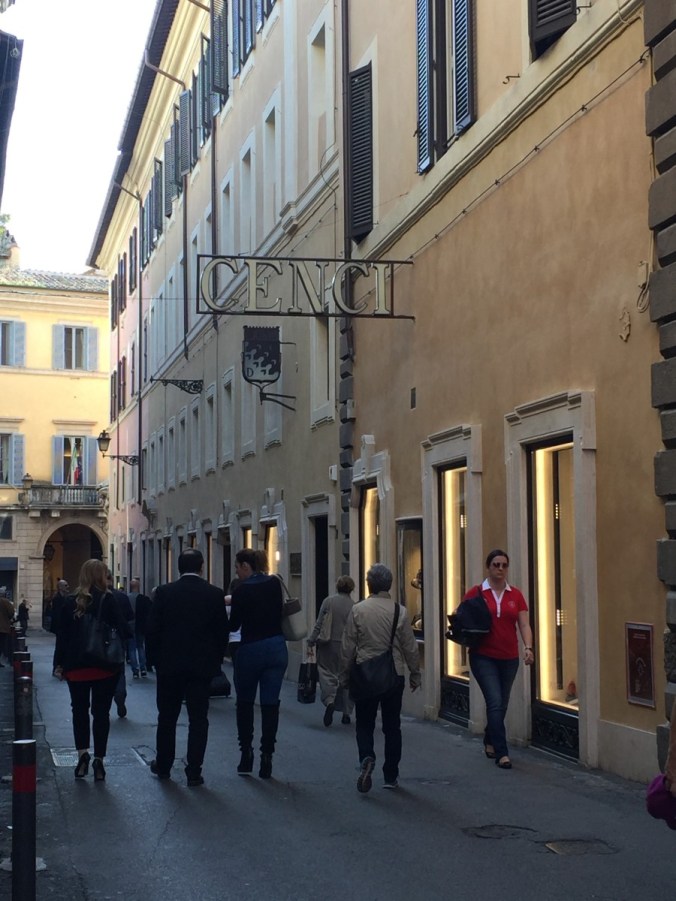 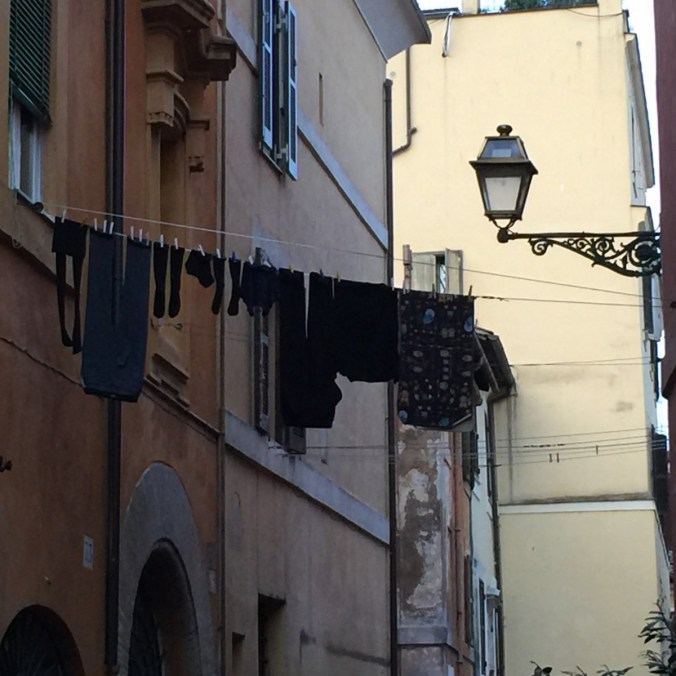 No writers or computers graced the small tables at Cafe Greco. We got in line, ordered coffee and decided to call our crawl quits for the day. 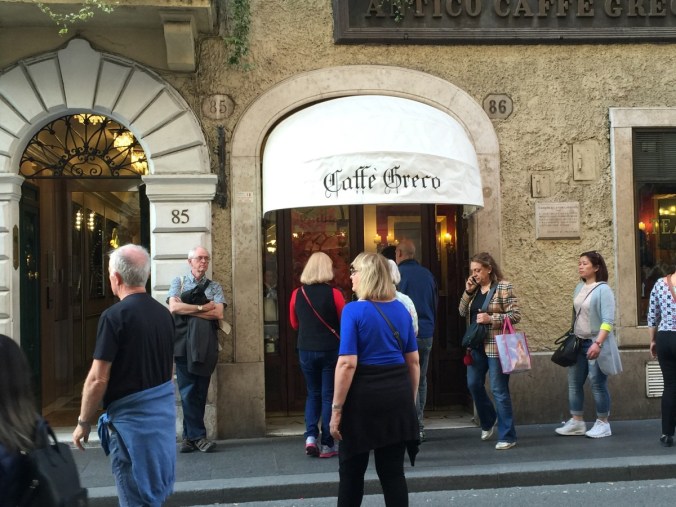 Coffee, Everything Else, Spirituality