In preparing for my upcoming trip to China, I began to reflect on my recent trip to Portugal. I decided to review my posts on that trip. To my chagrin, I came across two unpublished posts. Senior moments encourage humility! While late, it is as as timely as when I wrote it. Here it is.

While ascending and descending the seven hills of Lisbon last fall, I felt the goddess of travel secretly guiding my journey from the shadows of a hidden dimension. Random walks led to places I would have put on my itinerary had I been into making a plan. Like stepping stones on the trail a series of UNESCO sites opened, one jewel after another, revealing the layers of art, architecture, religious and political history that provide a deeper understanding of Portugal’s historical role in world matters. And, along the way, an abundance of street musicians’ syncopated sounds from ancient stringed instruments filled the promenades with melodic harmonies. In the evening, after sunset, heart-rending interpretations of fado poured out of restaurants and wine bars.

A five-minute walk from the Art Inn where we were staying, an extraordinarily large Starbucks had become my Lisbon’s go-to coffee house. Not Portola in the OC mind you, or Temple in Davis, but it had Wi-Fi, which I so desperately needed and a better than expected almond milk chai. One cool morning while sipping and reading a tourist guide, I came across information on Sintra a small town set in the Serra de Sintra about twenty five kilometers out of Lisbon. It spoke of a history that went back thousands of years. The Mother had chosen to make an appearance on the mountain above and monks followed up by building a monastery on the site. It had drawn royalty for centuries. In the spur of a moment, thank goodness for a flexible partner, we decided to head for Sintra. Fortunately, with the Rosso Station right next door to Starbucks we were on our way in a matter of minutes.

After pulling out of the station, a stream of non-descript high rises and shopping centers revealed another side of Lisbon, one that visitors only see from a train. 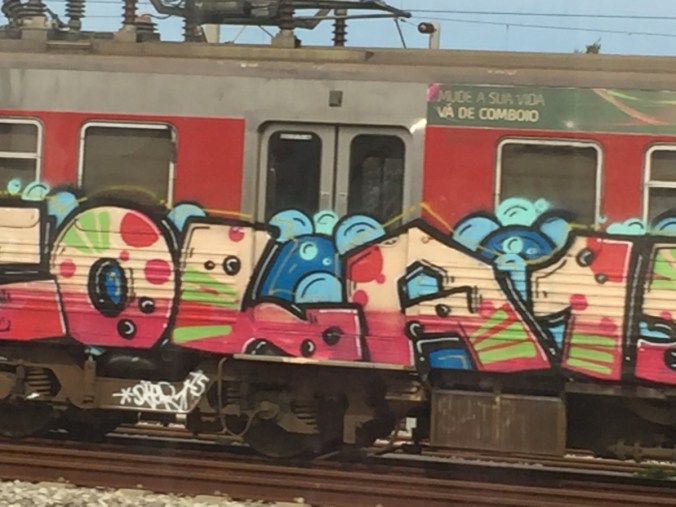 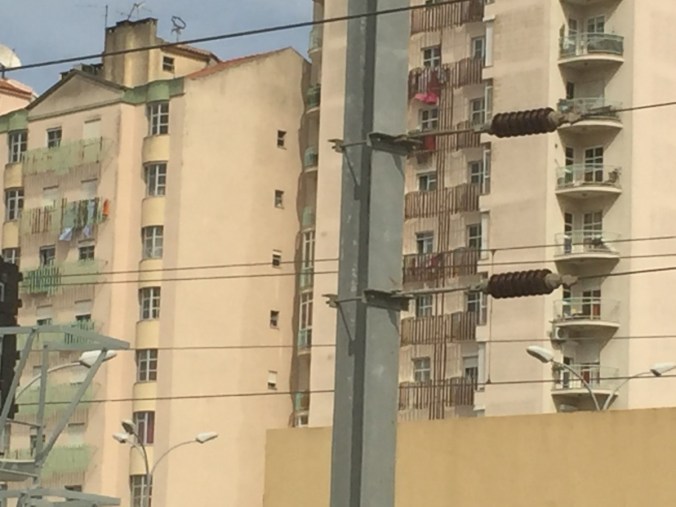 After the poetic charm of the inner city, the bleak scene left little to excite the imagination. I was grateful when it gave way to a thick-forested terrain full of oak and exotic plants. Observing the beauty of the sensuous overwhelm approaching Sintra, I understood why in in the 1800’s royalty had been drawn to this part of Portugal.

But signs of human habitation in Sintra go back much further than the nineteenth century. Traces of people have shown up as far back as Paleolithic times. Later, the Romans designated it as home of the sacred mountain and Ptolemy referred to the surrounding mountains as mountains of the moon. Derived from the medieval Suntria, Sintra became the place of the bright star, the sun.

In the Middle Ages after an apparition by Mother Mary, a chapel dedicated to Our Lady of Pena was built on the mountain-top. By the 1500s, a monastery was constructed on the same to serve as a place for meditation. When the 1755 earthquake destroyed and left the place in ruins, the land lay dormant until King Ferdinand acquired the lands and proceeded to build a palace as a summer residence for the royals. Queen Amelia the last queen of Portugal spent her last night in Portugal in the castle. Currently, no longer a vacation spot for royals the Pena Palace is a UNESCO World Heritage site.

In this fairest of all lands, now a sort of Portuguese Riviera, a charming village awaited us.The Pena Palace touted as a prime example of romanticist architecture with Gothic, Moorish, Manuelin and Renaissance elements and as one of the seven wonders of Portugal, sounded like a not-to-be-missed must see.

Forty minutes from Lisbon, we disembarked just short of the village and hailed a taxi. Sintra awaits Uber! Passing through the village, we witnessed quaint shops, charming homes and finally a trail of public art just before ascending into the hills surrounding the palace. With its primitive vortex-like energy, or perhaps due to a past life hidden in my unconscious, I began to feel a vibrational resonance. 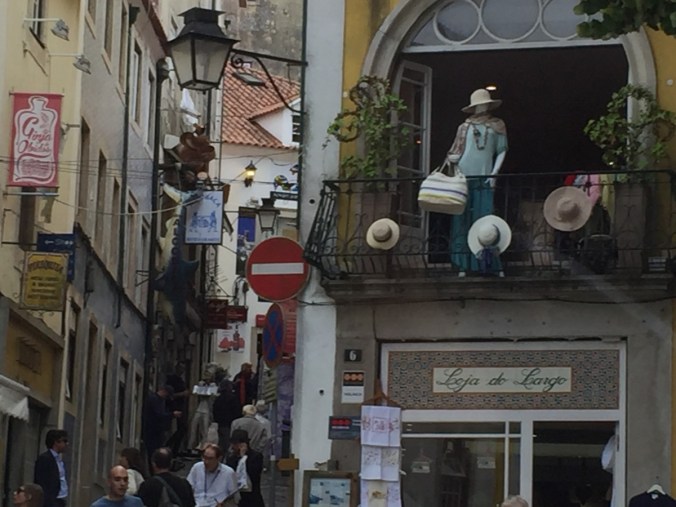 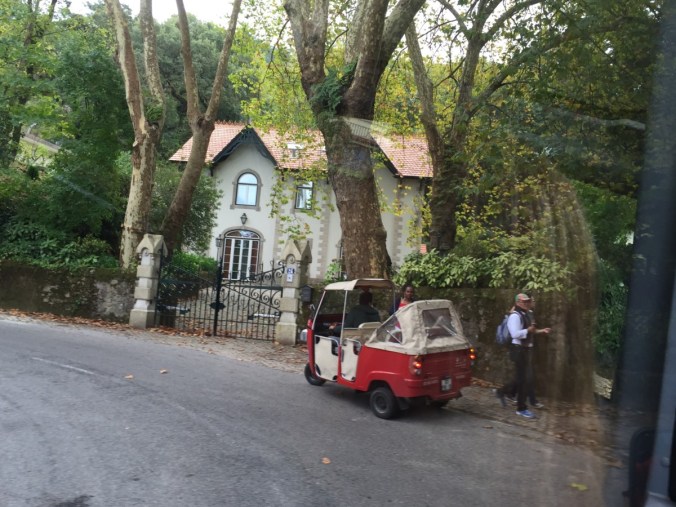 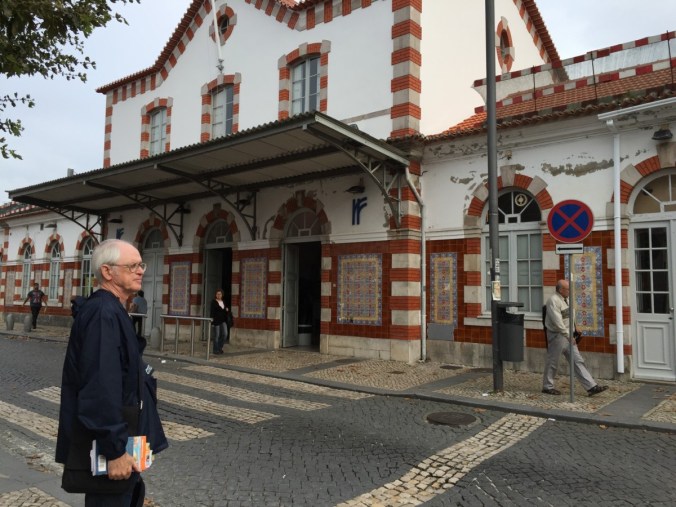 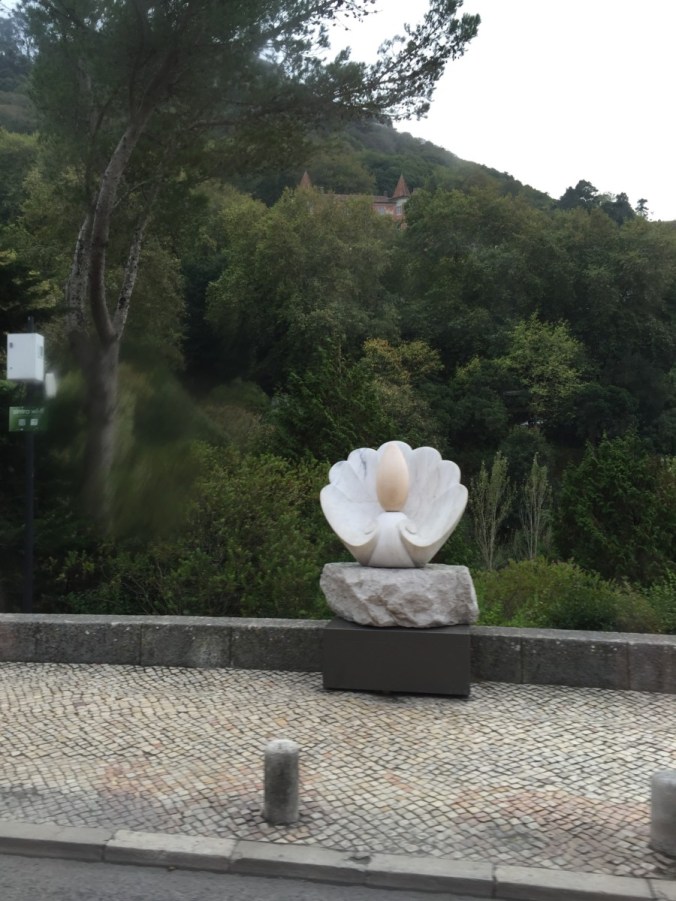 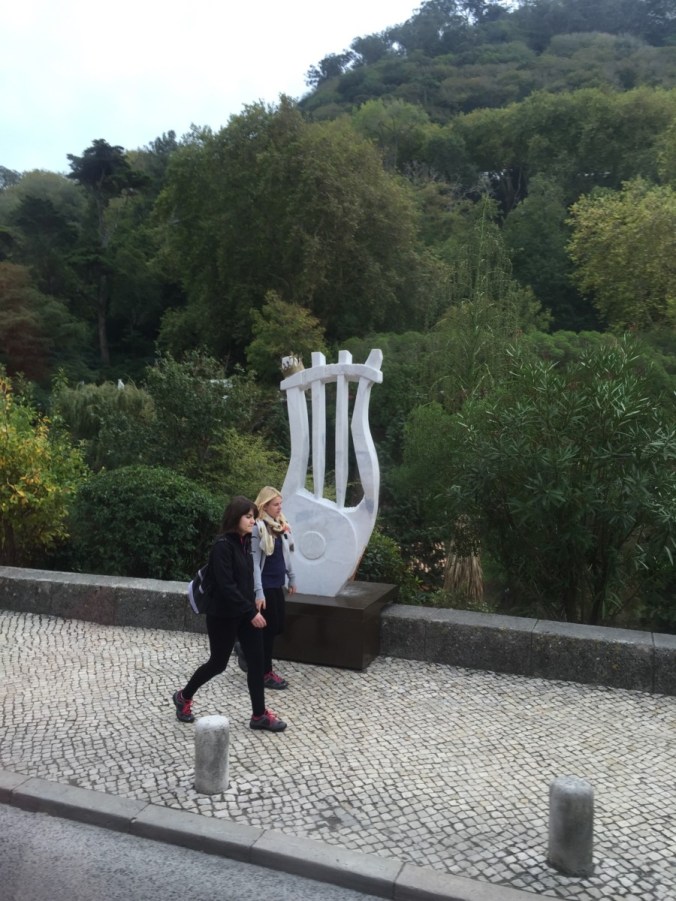 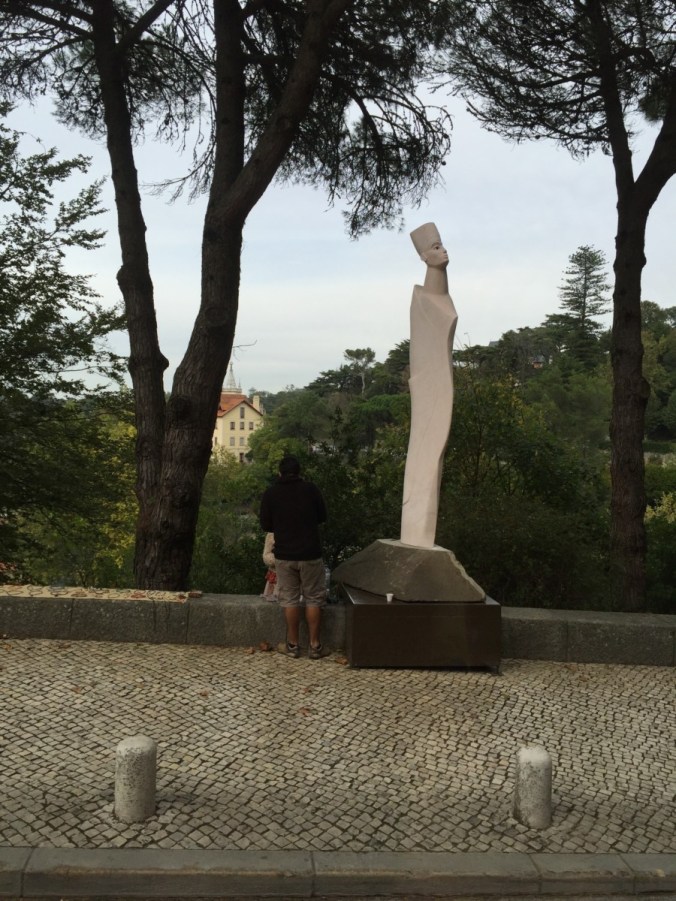 Winding up the road through the deep forest of imported trees including California Sequoia and Japanese Cryptomeria, with carpeted grounds of local and exotic plants, I felt as though I had dropped into the center of a children’s fantasy. Seven dwarfs and rabbit holes came to mind. Stretching and straining to see what was coming around each curve, when I finally caught my first view of the palace, I wondered if Walt Disney was hovering in the ethers. 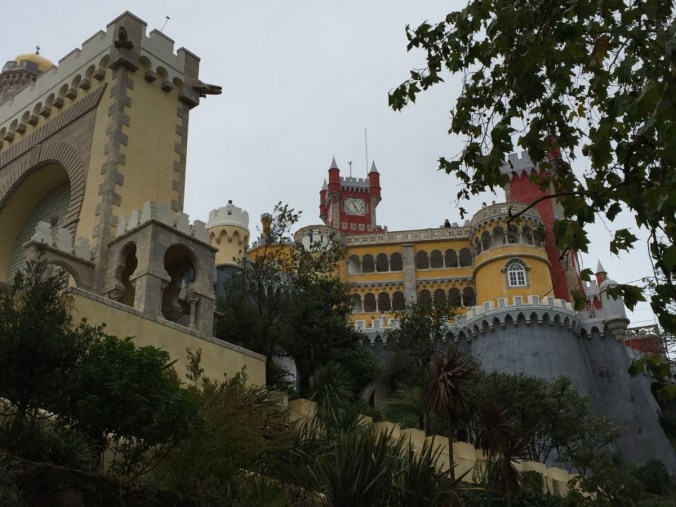 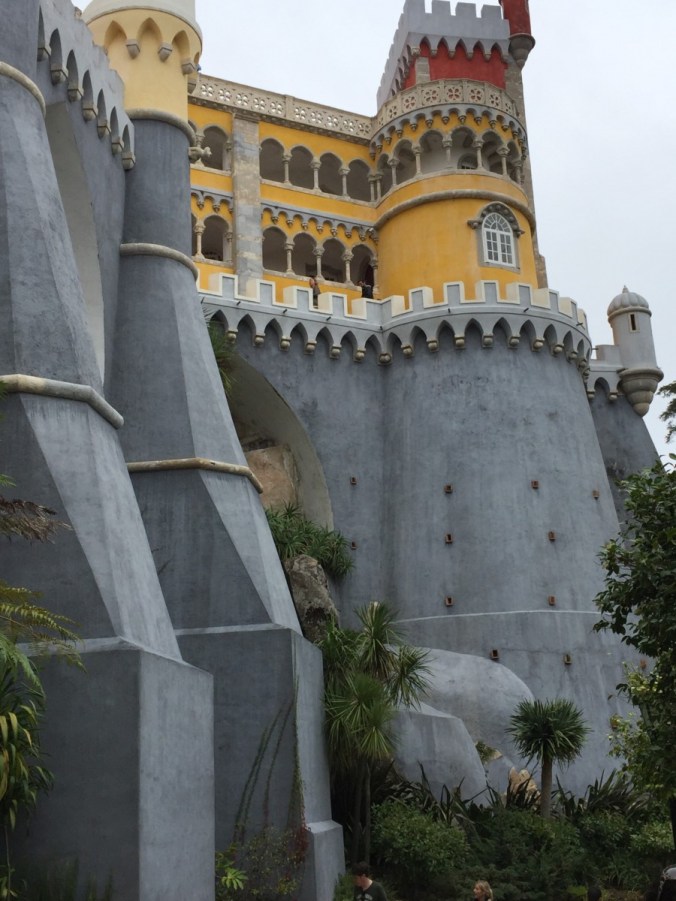 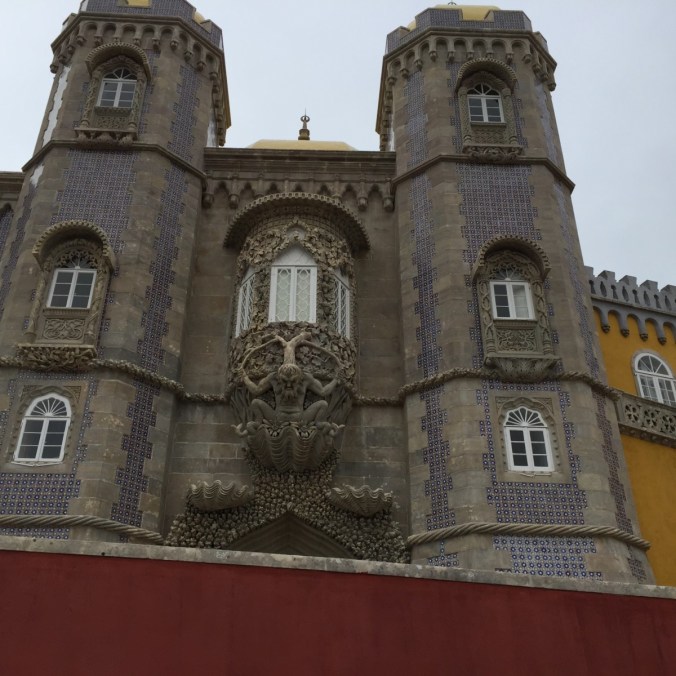 The tour of the palace seemed surreal. I appreciated the exterior and interior design, but could hardly imagine anyone living in it. It felt more like a set designed for a Disney film than a home in which one could live. But then I am not royalty. 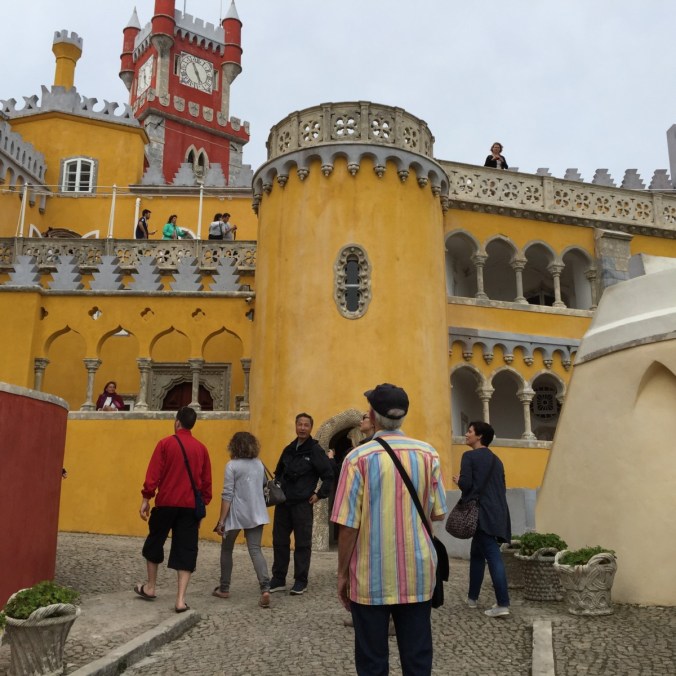 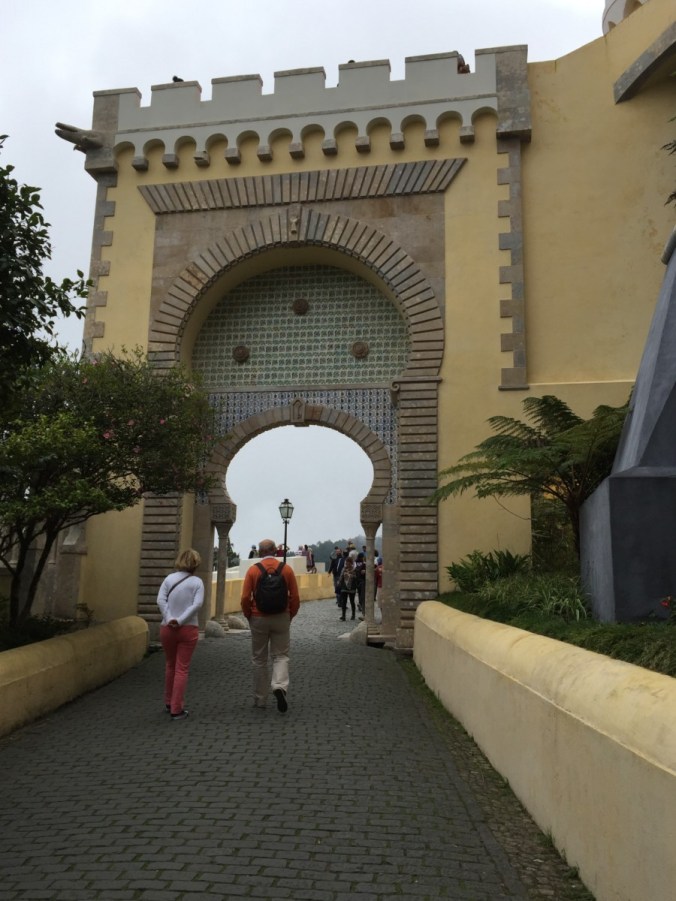 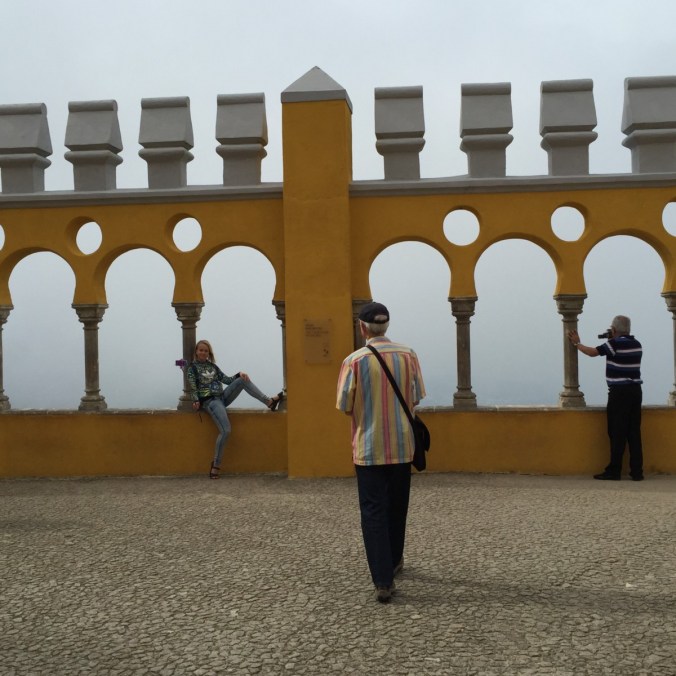 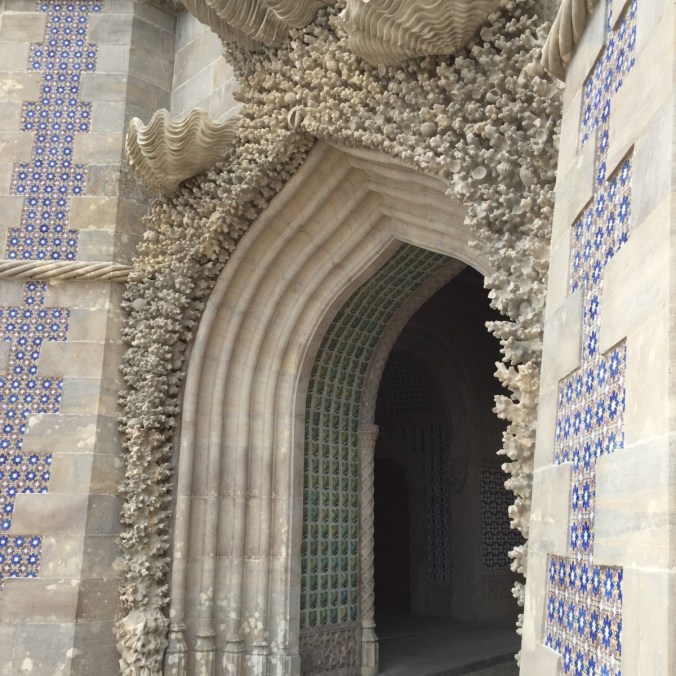 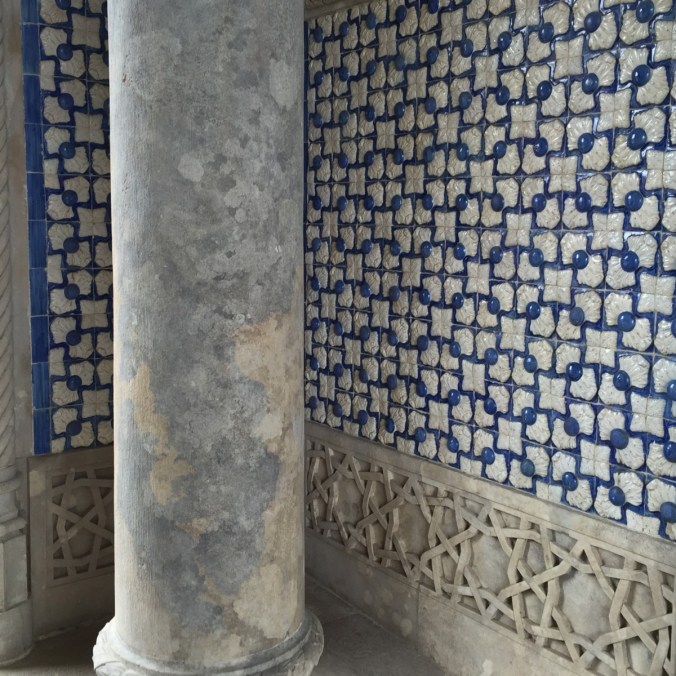 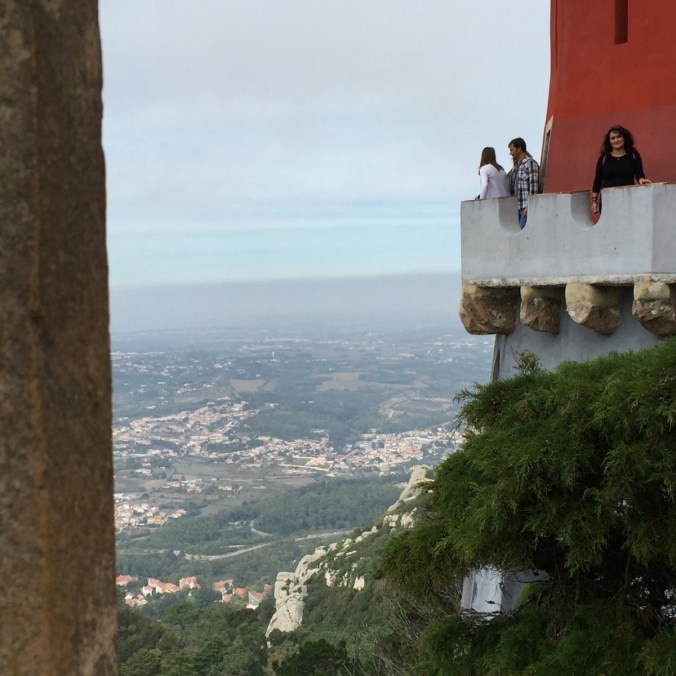 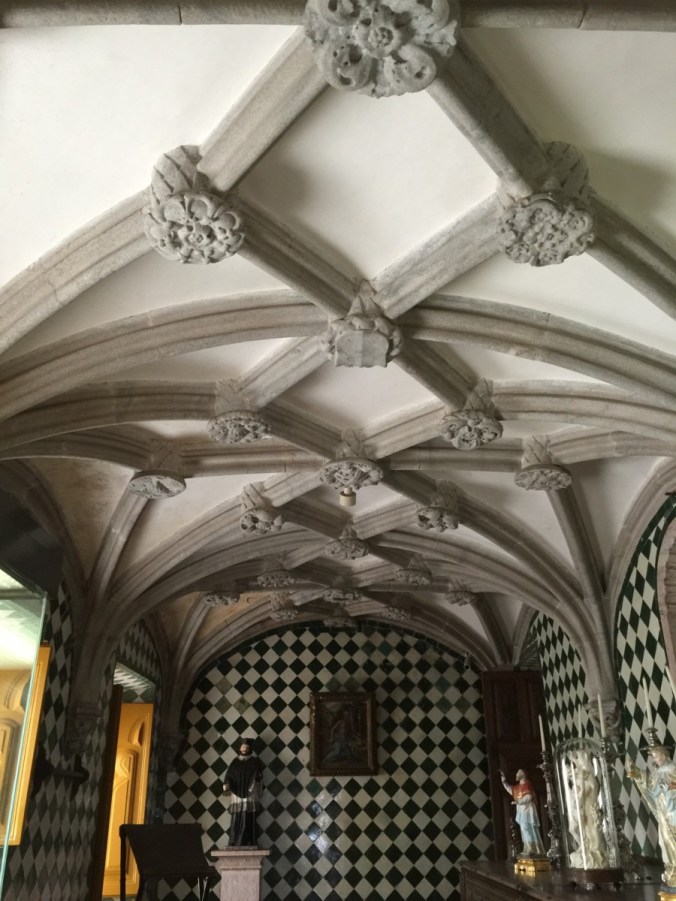 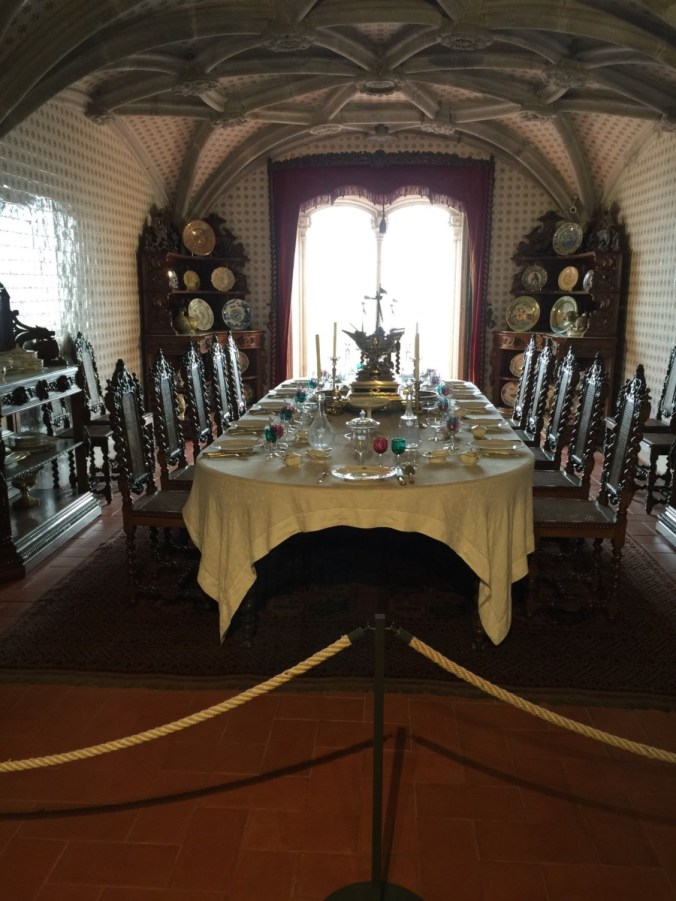 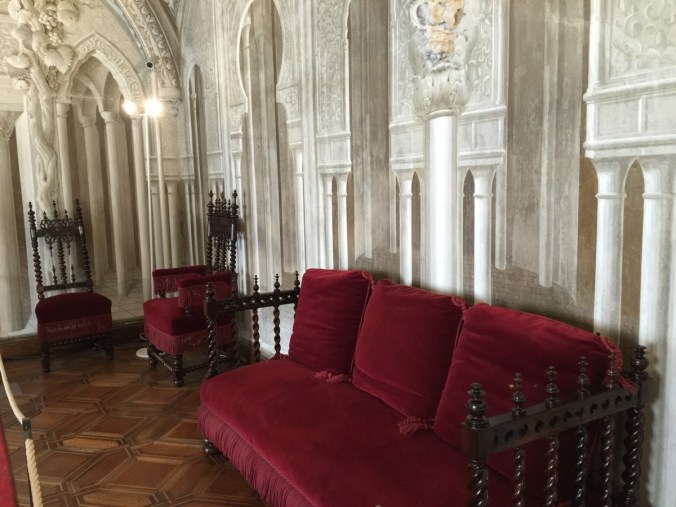 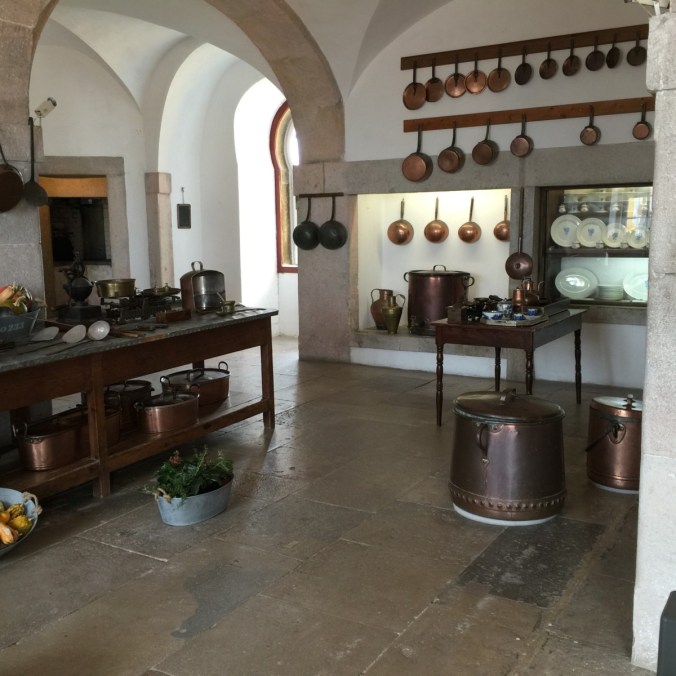 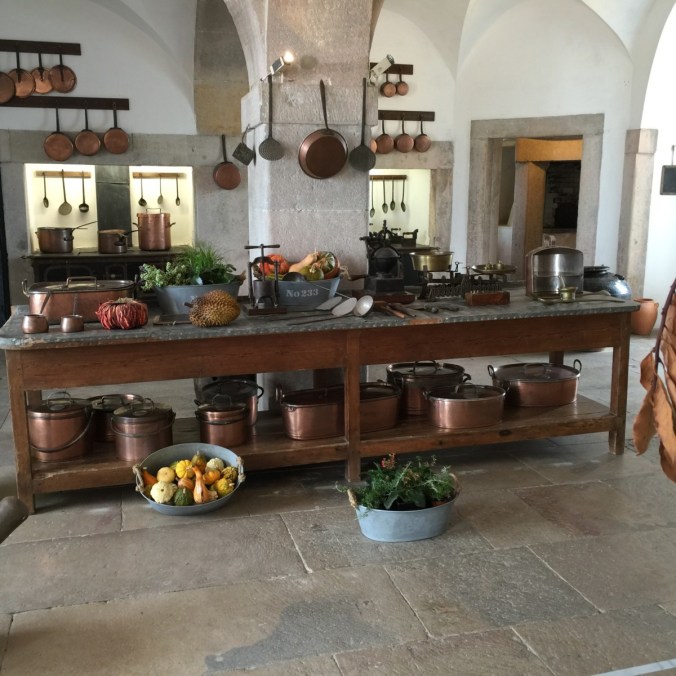 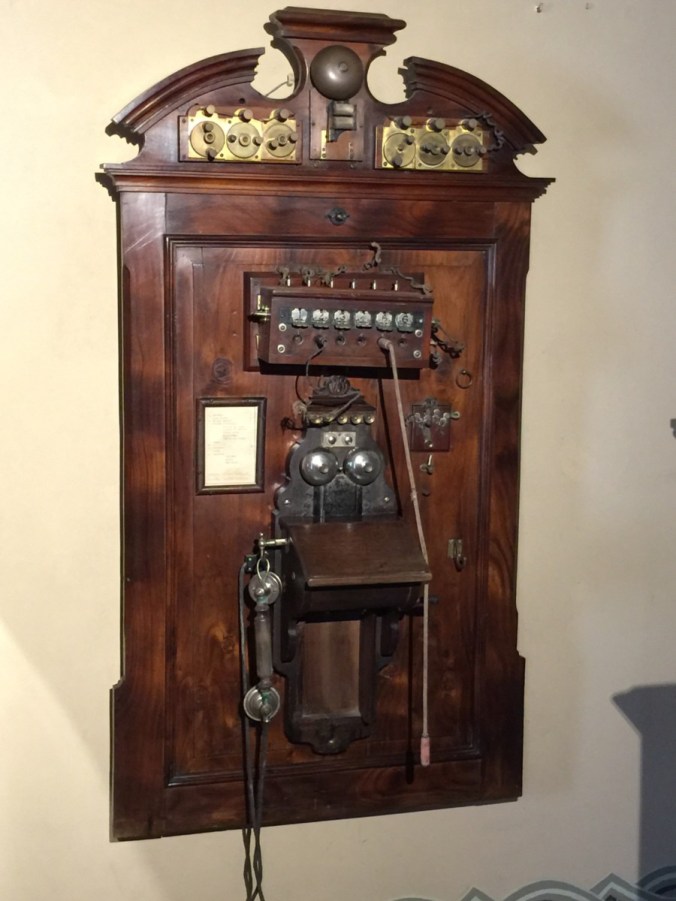 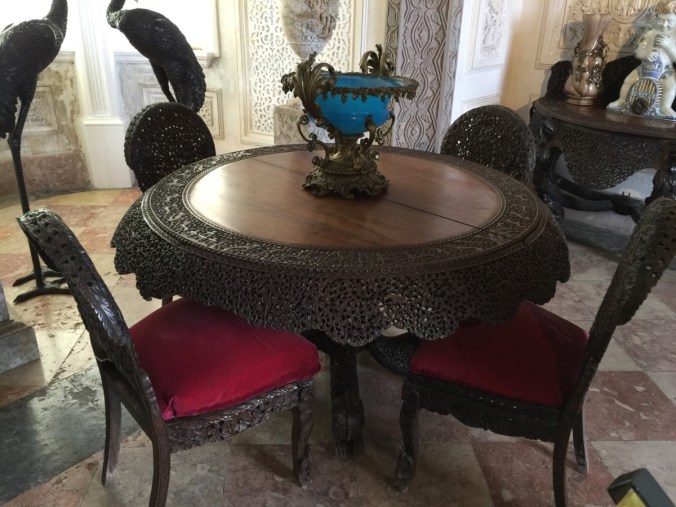 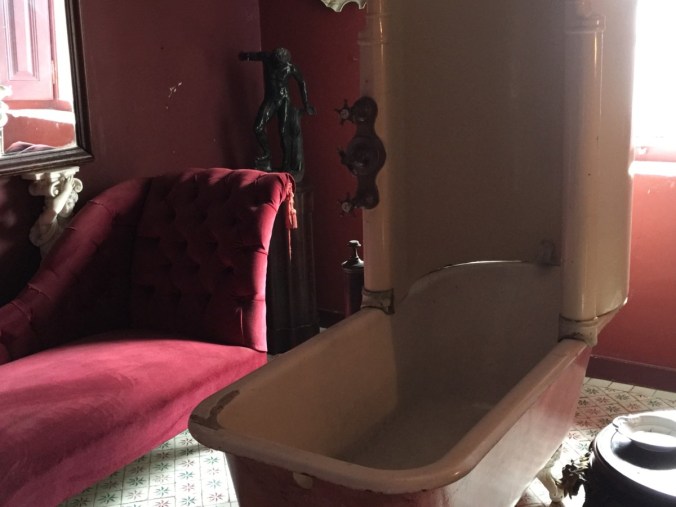 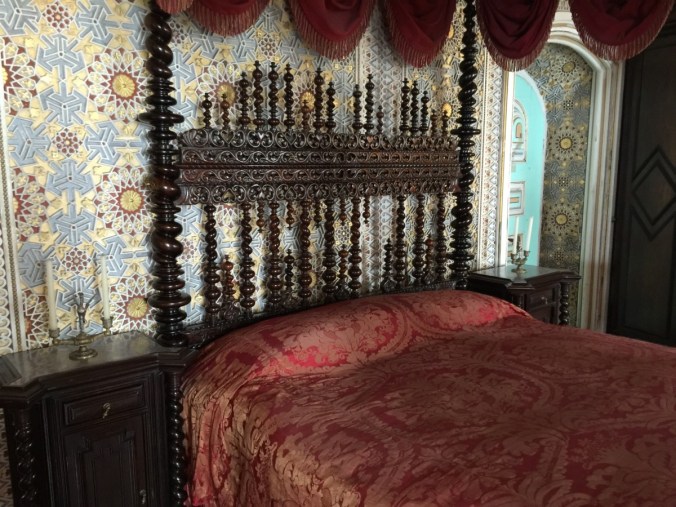 The above are but a few photos of the external structure and interior. While meant to tempt and encourage a visit to Sintra, as beautiful and unique as they are,  the power and beauty of the land spoke to me  to me as much if not more than the constructions.

Remember, the Goddess of Sintra is there waiting to lead you around this most remarkable piece of land.