I know it looks like a work of art, perhaps reminiscent of a Richard Diebenkorn. The sign like everything else that is composed at this unusual restaurant in Costa Mesa, California is elegant, artistic, and enough to turn the taste buds upside down. Two years ago, my partner and I had gone to Farmer’s Market on a Saturday morning at the OC Mix, a collection of locally owned boutiques and specialty food spots in my hometown of Costa Mesa. A ring of food trucks surrounded an end of the market. Hungry, I decided to check out the trucks for some lunch. After reading over the menu at Taco Maria, I ordered the shitake mushrooms, walked over to a table, laid down my meal and began to munch. My palate began to dance in the stars as I enjoyed the best tacos I had ever had. At the time, I did not know who was in the tiny truck kitchen or why, I just had to go back to Taco Maria every time I was in the OC. A few months after that initial meal, I arrived to hear that the truck had closed. Carlos Salgado, the chef, was going brick and mortar. I languished for several months until he opened

Talk about a native son (Salgado grew up in nearby Orange) doing well, Carlos is getting hooplas from every part of the food world. Los Angeles based Jonathan Gold, the only food writer to have received the Pulitzer Prize for food writing, has put Taco Maria on his top 100 this year (for Los Angeles, no less). Food and Wine recently selected him as one of the top ten best new chefs in the US. The announcement will be in the July issue.

Brad Johnson of the OC Register says that, “Taco Maria is one of the most sophisticated restaurants to open in Orange County in years…has turned fine dining on its head.” He also claims that, in a word, it is a restaurant not only important to California, but to the Americas. Move over Mexico City.

The thing is, Salgado does not serve traditional style dishes associated with Mexican cuisine: burritos, enchiladas, tamales. Raised by the owners of a taqueria in Orange, he worked in some of the finest kitchens in the Bay Area including a stint as pastry chef at Michelin starred Coi and Commis in Oakland before returning to the OC. At Taco Maria, he brings together his heritage and his experience in the fine dining world. When the brick and mortar opened, I was thrilled to see that shitakes were still on the menu in the form of mushroom chorizo, among other preparations.

The simple, attractive site, overlaid with black walnut and raw steel with a few interior tables, a patio with several and open to whatever the elements may bring. In Costa Mesa that usually means temperate weather. 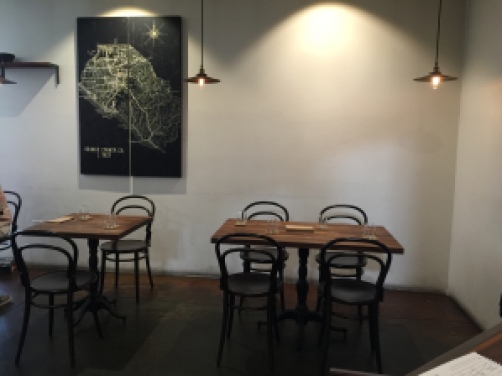 At the bar (my favorite place to dine), one can easily observe the work of the chef and his small crew of sous artists in their open studio kitchen. They work seamlessly in unison almost as though one person, quietly composing dishes, generally breaking their focus only to respond or to acknowledge a customer. Salgado’s watchful eye addresses each dish before it goes to the diner.

Sylvia Salgado works along side her brother administering, serving, and advising.

If there is a restaurant that can be thought of as an art studio, it’s Taco Maria. Salgado draws, paints, sculpts, and designs with only the finest ingredients available. Methods include sous vide and charred wood fire. I am always amazed at the way delicate items such as flower petals and cilantro flowers are arranged and tweaked with tweezers. With nothing left to chance, his artful compositions are as beautiful to look at as they are to eat. 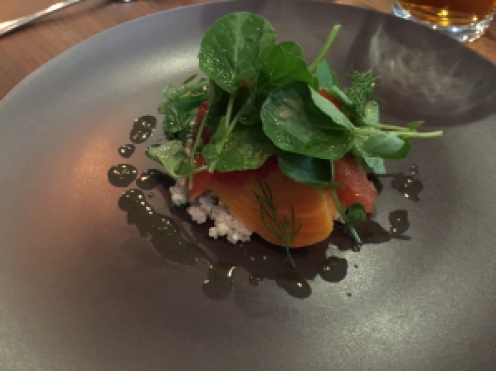 I know he forages but will not reveal where. I don’t blame him. Open, untarnished land is at a premium in OC. Besides, as Chef knows, I would be tempted to go myself if I knew where. He gets corn from a small farmer in Mexico, grinds it and makes his own posole and blue corn tortillas. Recently, I was standing near the door as a diner exited. I heard him say, “I generally don’t like corn tortillas, but those were the best I’ve ever had.”

The menu changes seasonally, and I have to have it at least twice. A pre-fixe menu is offered Wednesday through Saturday. A mainly taco menu is served at lunch and on Tuesday evenings with brunch only on Sunday.

When I think about describing the dishes, it’s hard to know where to begin. I was unfamiliar with huitlacoche butter. Sometimes called corn smut, it has an earthy taste. I had it at Taco Maria for the first time on a piece of bread smothered in refried beans and queso fresco at brunch. Simple? Yes, and good enough to bring me out again for brunch on any given Sunday. One of my favorite sides at the same is the crispy potatoes perked with just the right amount of torreados. The yogurt and fruit items give a new take on the traditional health breakfast: coconut granola atop a panna cotta like yogurt mousse gently covered in wisps of citrus sprinkled with poppy seeds.

Those who come expecting the traditional dishes mentioned earlier leave with an expanded understanding of what Salgado means when he calls his style Chicano cuisine. I cannot go to lunch without ordering the shitake chorizo tacos with crispy potatoes and queso fundido while my partner usually does local black cod with scallion aioli, cabbage and grapes. Out of the eight items on the dinner menu of which the diner chooses four, there is generally one taco. Mind you, not your mother’s taco! At this writing, squid, garlic, peanuts, purslane on an ink tortilla is the seasonal choice. I’ve had it. The purslane was so fresh it must have been picked just in time for my tortilla to be served!

The dungess crab with grits recently changed to crab with Carolina gold rice; green chili and chicken skin is a personal favorite…

… along with the frijoles, heirloom beans braised bacon, and oregano with grilled cabbage. 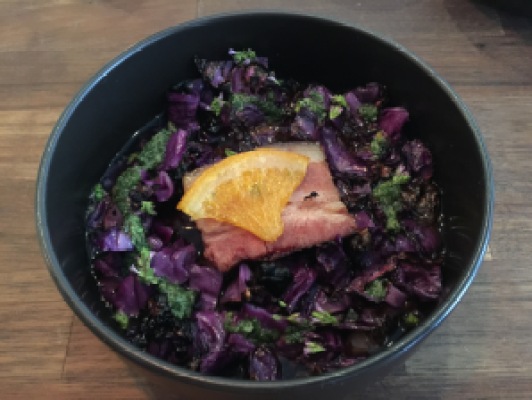 On the current menu along with the dishes in the above three photos is a salmon dish that reflects Salgado’s ability to layer history and heritage. A king salmon bathed in cultured cream containing, peas, potatoes and caviar brought up memories of dining with my parents at The Harbor House  in Costa Mesa back in the fifties when salmon was preceded with Boston clam chowder. At the same time, the dish reminisced the best of California coastal cuisine of the same era. Salgado is too young to have experienced the above; the history must be in his genes.

The pre fixe dinner menu at 65.00 is the least expensive *** Michelin quality meal I have encountered. (A wine pairing featuring global wines and ales is available for an added 29.00.) When I mentioned this to Carlos he pointed to his staff  at work in the kitchen and said, “They are doing the work.” Devotion to quality and humility are his hallmarks. While he is getting high press, I have never seen him grab the limelight.

In addition to artistic sensitivity, humility and commitment, Salgado has great regard for his customers. I once asked him if it would be ok if I brought a vegan friend to Taco Maria for dinner. He said, “yes,” then created a menu to suit my friend’s dining needs on the spot.

Until recently, no one thought of the OC as a dining destination. While it has a history of coastal cuisine, with longstanding traditional Mexican and Vietnamese establishments in the interior, it is the work of the second and third generations such as Salgado with his “Chicano Cuisine” who are changing the format. Taco Maria, a destination par excellence, is well worth a drive or a plane flight. It offers some of the finest food I have had throughout the US.