The following may be a bit of a geographical stretch for some readers, but with Disneyland, its gorgeous beaches, Catalina Island, vital museums and more, the OC continues to be a magnet. If you go, consider the following. 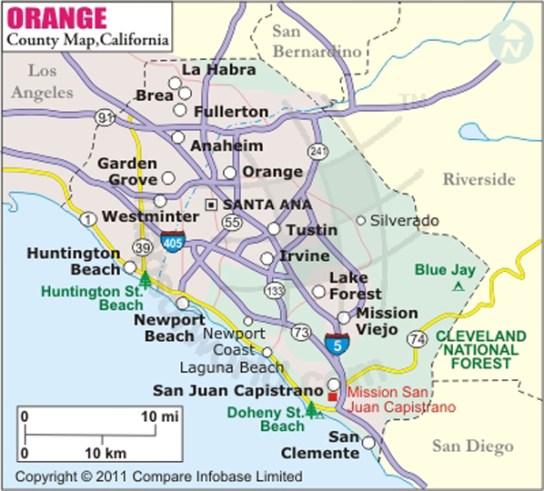 One evening about a year ago after my partner and I had dinner at a hole in the wall in downtown Santa Ana, the east end to be precise we decided to take a stroll. An interesting factoid: In 2011 Forbes named Santa Ana, the county seat, as the fourth safest city in the nation with a population over 250,000. Over the past ten years, the old downtown has been gradually coming back to life. Happily, the town parents are renovating old structures rather than tearing down, and, with its thriving Hispanic-Latino culture, the city scintillates. The quality of  restaurants and pubs along with the new 4th Street Market is turning old downtown into a dining destination.

During our walk, we happened on North Left. Save for a chalkboard sign on the sidewalk, we could easily have missed it; due to its non-descript front with no signs or menus posted on doors or windows. 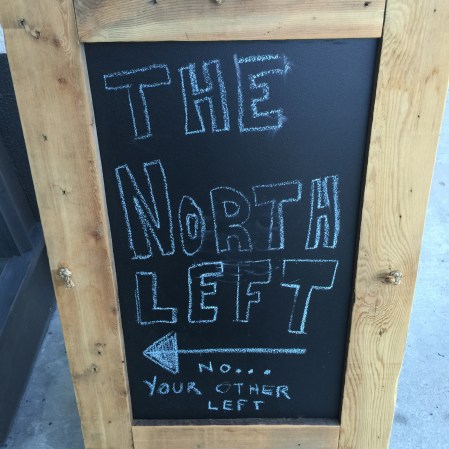 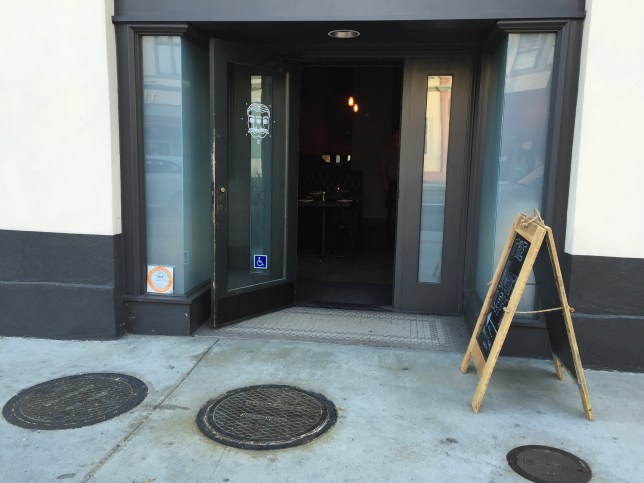 I would have passed by, but because of a friend whose palate I respect had given it a great recommendation, I peeked inside.

Dark walls, high tables with heavy metal stools, nothing pretentious, small table area off to side, a gastro pub or so I thought. 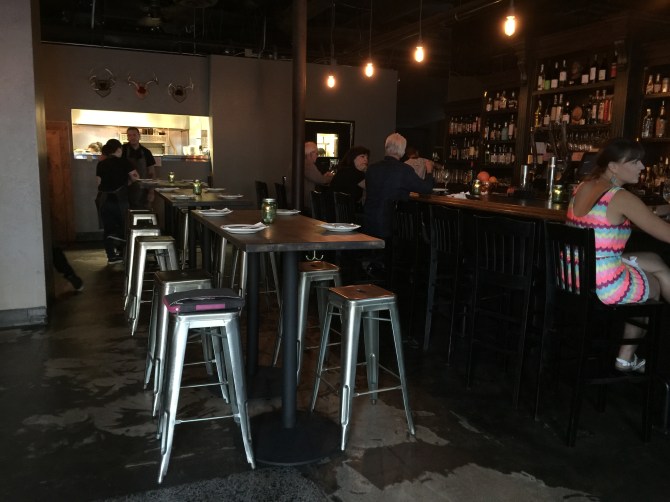 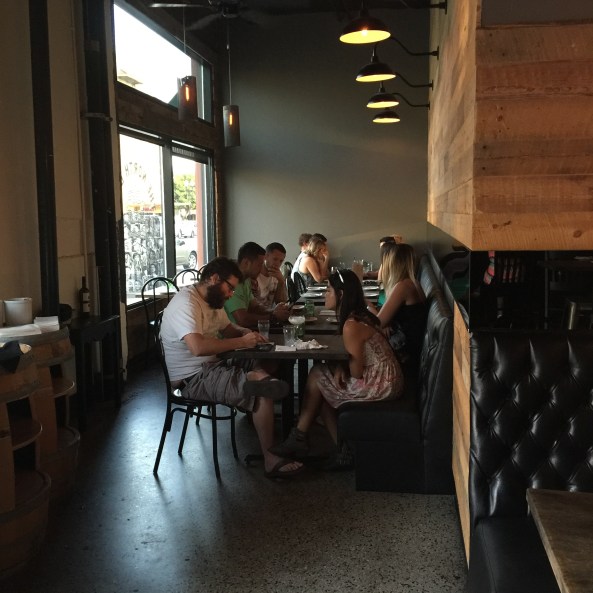 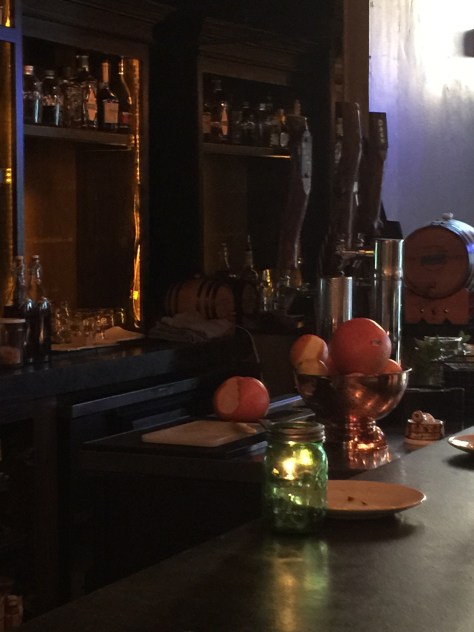 A video of colorful ethereal images played on an unobtrusive screen. As I looked about I recalled having been to the space earlier when it was under a different name. I liked the changes; the old space, a hip teenager, had become an adult. A casual perusal of the menu revealed brews and no, not burgers, but what appeared to be some very sophisticated plates.

Shortly, we returned for dinner.

Since that initial forage, with a dozen plus meals under my belt, North Left has become another one of my go-to’s. When I am in the OC, I have to have Chef Aron Habiger’s food at least once a week. The menu offers options for carnivores to vegans at affordable prices. Were North Left in San Francisco, they would double. Several plates to share are an option.

After culinary school, Habiger spent his time in an assortment of places notably Forage in Salt Lake City before moving to OC.  Now, happily, he is in a place where he can show off his sophistical talent and craftsmanship. Ashley Guzman, the pastry chef, puts out desserts that are as creative as the rest of the menu. She changes and tweaks the dessert menu daily.

The brussel sprouts are sine qua non, the best I’ve found anywhere. First, de-leafed, then sautéed in brown butter, reducing some of the bitterness characteristic of brussel sprouts, the leaves turn chewy, but with the brown butter they maintain a hint of a melt-in-your mouth texture. Massaged in finely grated San Joaquin Gold, a mild cheddar-like cheese from Fiscalini Farms in Modesto, CA, they are finished with chunky roasted hazel nuts. I have done several brussel sprout runs up and down the left coast, but honestly when I want the sprouts my heart takes me back to North Left. 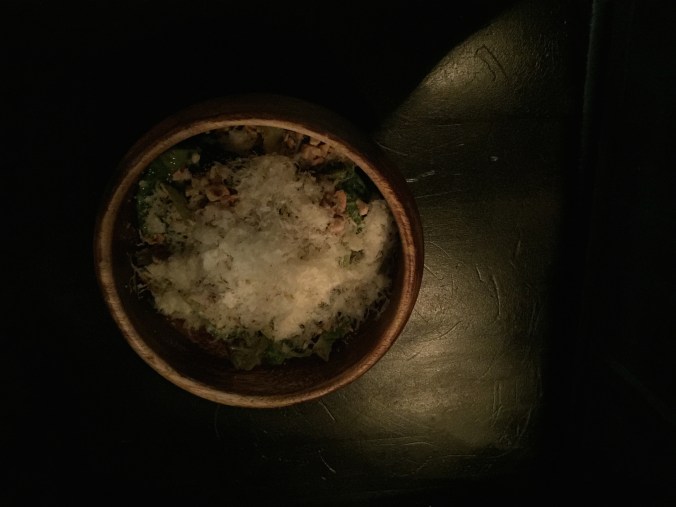 Habiger impressed me with his recent addition to the menu, Breakfast Radishes. That first bite, a chomp into a delicate, slim radish, bathed in a swirl of bee pollen flecked buttermilk, finished off with crunchy, candied sunflower seeds awakened my sense of the divine. A delightful sequence of mixed textures, the preparation came off as one, simple taste. I commented to Habiger that “the dish was so elegant yet so simple,” he returned, “the simple is the most difficult to execute”. I agree. Grilled steak, generally a sure bet in the right hands, but radishes? Never thought I’d see the day when I could hardly wait for another go-round with radishes.  Not bad for my diet, either! 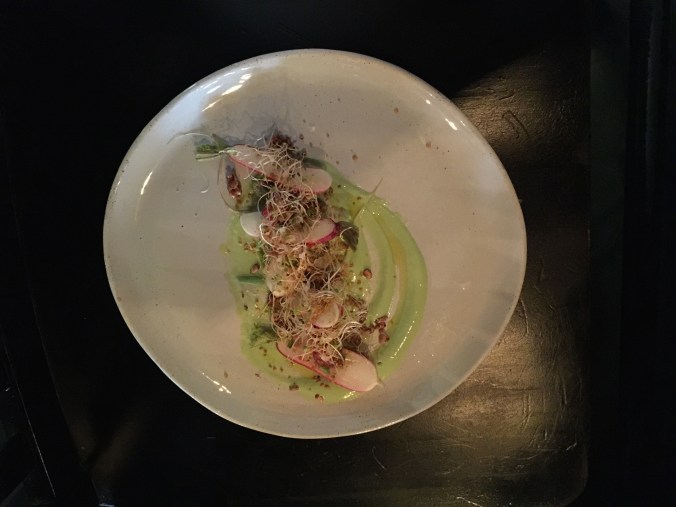 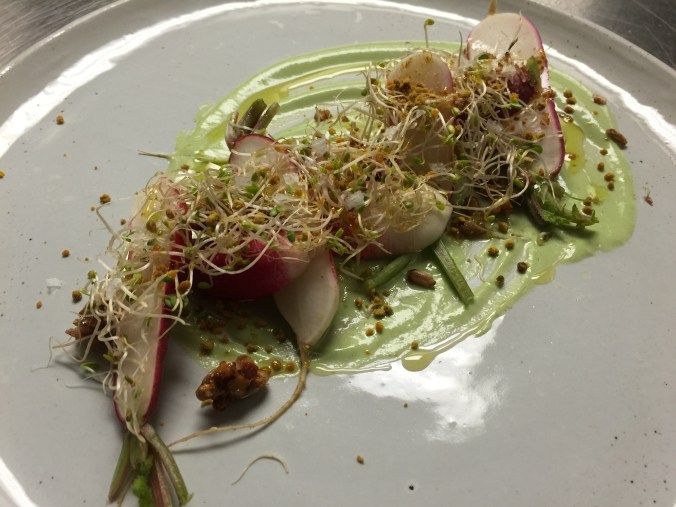 At the time of this writing, two entrees, steak and a fish are available. We went for the trout. Sided with gentle potatoes and escarole, zinging with capers, served in an iron skillet, taste and texture perfect, we had enough leftovers for a second meal.

Recently, Habiger has been running a kind of pop up on Thursday evenings complete with tasting menu. Shopping the Farmer’s Markets, along with using his own rooftop garden above the restaurant he collects the most seasonable ingredients, but on Thursdays the menu is spontaneous depending on what’s available. In another creative vein, instead of taco Tuesday, he’s known for oyster Tuesday. 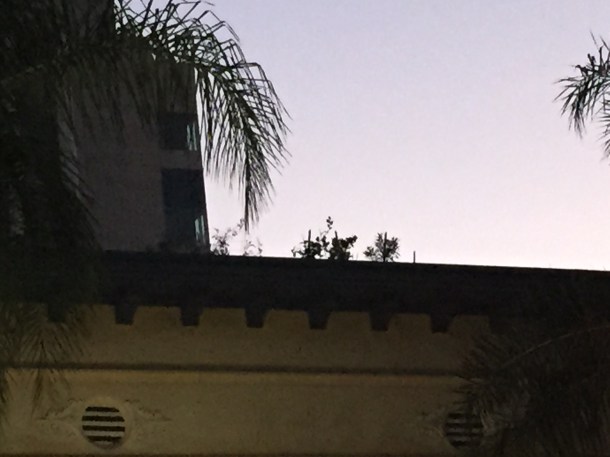 Steak, pork n skrimps, ham and biscuits, chicken nuggets, poutine; all on the menu as well, and prepared in a way that will satisfy the most educated palates. On one occasion, the chef surprised my partner and me with a plate of scallops. Encircled in mint flavored squid ink, highlighted with finely diced chips of green watermelon, it gave me pause. Umami? I am still reflecting. 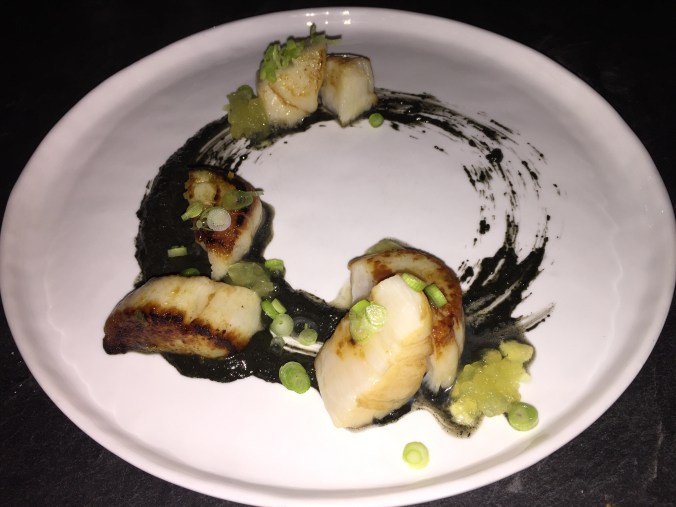 Aside from the food one of the things I love about this place is the crew. 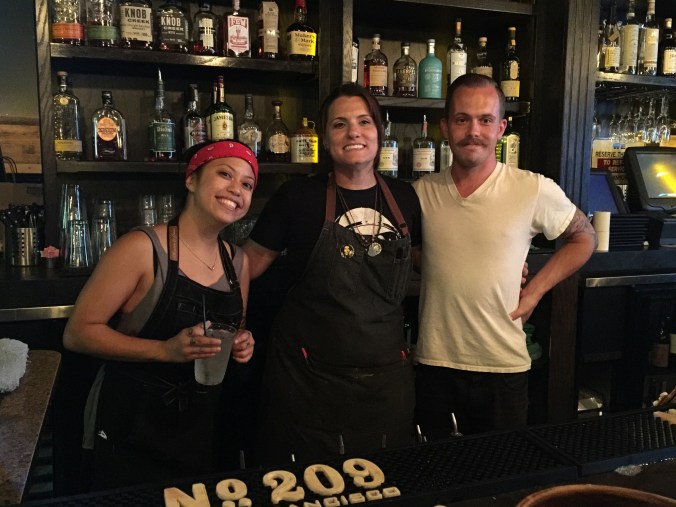 When I arrive, they greet me warmly and often share their enthusiasm about some dish on the menu. Habiger with his outgoing personality is generally out on the floor welcoming and interacting with diners. When I eat at North Left I feel like I am having dinner in the home of close friends. 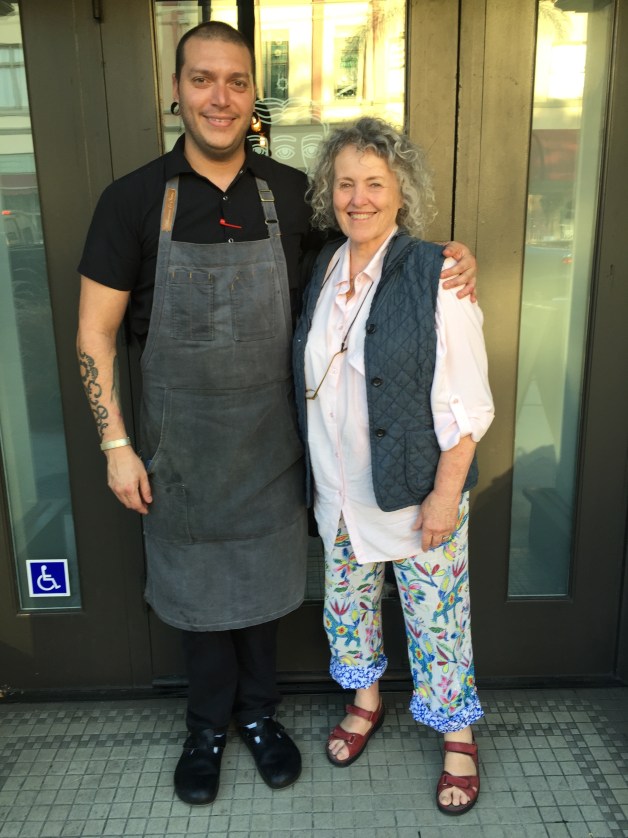