The current trend: is it a plate of food or a work of art?

Recently, my partner and I headed to Berkeley for a talk to be given by one of the authors of Unbounded Wholeness, that book I have been traveling with since Vietnam. Although the talk was scheduled for 7:30, Tenzin Wangyal Rinpoche is famous for showing up early and I wanted to be seated by the time he walked in. We decided to have an early dinner at Gather a restaurant less than ten minutes away from where the talk would be given.

My vegetarian friends, Gather is not vegetarian, had spoken highly of its plant friendly menu. I crave vegetables; in fact they are my favorite food; I looked forward to a round of Gather. The place was booked solid, but we got seats at the bar where walk-ins are seated on a first come, first serve basis. I sat down to read that Gather serves biodynamic, organic or wines made with sustainable practices. So with that news, we were off to a good start.

Ordering could be tricky. I do not like to attend lectures on a full stomach, but with the availability of a vegan, gluten-free charcuterie, that proved not to be a problem. Current meal planning is not an easy matter for chefs especially in places like Berkeley where multi-forms of eating choices thrive. With diners having gone vegan, gf, pescatarian, macro-biotic in addition to omnivore, chefs are forced to ignore a growing part of the foodie population or simply adapt with a broad spectrum of friendly meals. In Gather’s case, the menu provides an umbrella that covers all needs

The charcuterie with its four chosen vegetables reminded me of a Byzantine mosaic  composed of  bits, chunks, and slices of turnips, beets, mushrooms, citrus and complemented with swaths of puree, and peppered with hints of various herbs, spices and nuts. If one yearns for simplicity, this is not a dish to order. It was a bit much for a friend who designs food sets for professional photo shoots. ““I want just carrots, simple, fresh and to the point,” she commented.

For others, myself included, the creamy and crunchy textures, the savory, spicy, smoky, fermented, citrusy, umami flavors deftly blended with the veggies and so articulately laid out, offer not just a lovely twenty first century combination plate but a piece that could be represented in an art exhibit. I think this is what is meant by the phrase “edible art”.

The eye-popping presentation presented a row of mushrooms slathered in a creamy, fermented carrot that just popped. Mandolin sliced radish and bits of chervil added a twinge of red and green coloring. Wedges of barely steamed new crop turnips topped with twisted fried seaweed curls and Meyer lemons offered a chunky contrast to the creaminess of the carrot. Among the four veggies, the turnip was my only disappointment. I would have preferred it cooked a bit more or raw, perhaps gently pickled. Chili beets aided and supported with oats, smoked oil, tarragon and pistachios were my second favorite. Toasted grains, quinoa or oats provided just the right textural dance partner with such finely sliced beets. The oats gave a smoothly chewy contrast to the chopped pistachios crunch providing a texture contrast that almost rivaled taste. A line of citrus dolloped with Cashew ricotta, castelventrano and dill added an overall light, sweet pearled acidity.

The name… ca….shu…..ri….co…..ta…euphonious, set up a soft sound vibe, a tonal quality that lulled me further into the dish.

In addition to the charcauteri I ordered the kale salad and a side of greens. I anticipated raw kale, but instead a lightly sautéed dish arrived resulting in too many cooked greens similar in taste and texture for one sitting, but still, tasty, they melded to the palate. Not the fault of the chef, but mine for ordering the wrong side. Crispy fries with soft and starchy carbs would have been better.

On leaving I took time to further note  the space. Gather’s interior architecture sets up open-ended spatial shapes and forms, not unbounded, this is a restaurant, but clearly done with a sense of feng sui. The patron feels surrounded by wafts of open space rather than hemmed in by fellow diners.

A few random pictures of Gather,  but none of the food. Best to let the imagination roam… 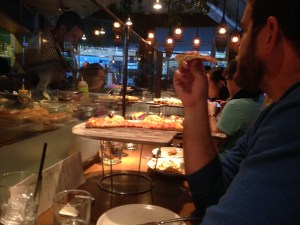 We arrived at the lecture hall before Tenzin Rinpoche and settled in with an unusual comfort level following such a unique meal. The talk turned out to be an enlightening guided meditation intended to illustrate that inner and outer space are one and the same.