There was no over-arching plan, it just happened as in “there are no accidents.”

In ten days my partner and I completed a spontaneous, edible crawl that left my mind windy with thoughts about what Peter Wells of the New York Times in a recent article on L’Arpege referred to as “the rising cult of the vegetable”.

We had planned to dine at L’Arpege last fall when we were in Paris, but with the restaurant booked on the only night we had available, our plan failed to materialize. In covering the rising prominence of veggies, Wells aptly describes what we missed.

“Dinner started with a plate of leafy radishes followed by a small cabbage turnoverand ended with a garlic crème brulee whose burned-sugar shell had been liberally spritzed with lemon confit. In between came a dozen courses made from turnips, carrots, peas, beets, cauliflower and potatoes. Two see-through bands of lardo on grilled white asparagus and, down at the bottom of vegetable minestrone, some bits of chorizo that would have fit into a gum wrapper were the only visible signs of animal flesh…

…Many chefs have been saying that their imaginations are no longer fired by pork chops and chicken wings, that the most exciting frontiers in cuisine are growing in the garden. Vegetables are both the medium and message…

…In the rising cult of the vegetable, L’Arpege is seen as an example, an inspiration and an early adopter.”

A menu that focuses on vegetables may be unusual, however, vegetables are not offbeat, trendy, or just a fad. Rather than a cult, their rising is a movement. We surely saw signs of it in our recent experience at three Northern California restaurants: Gather, (Berkeley) Verbena (San Francisco) and Mother (Sacramento). After our first palate bending meal at Gather described in the last post was followed by a second similar experience, we decided to drive across the Oakland Bay Bridge to try Gather’s sequel, Verbena.

Chef Sean Baker, Esquire’s Chef of the Year – 2010 opened Verbena in the Russian Hill district of San Francisco in January. Soon after it made Eater.com’s Heat Map. And hot it is! With some friends we arrived on a Friday at the peak of dinner hour sans reservations. We put ourselves on the wait list then walked around the corner to Biondivino, Ceri Smith’s wine shop where we sipped prosecco while waiting. Shortly, the hostess called us to dine.

Accompanying us were Ceri, recently declared Food and Wine’s Sommelier of the Year, Clare Hasler Executive Director of the Food and Wine Institute at UC Davis, and her husband, Cameron. A brood of foodies to say the least! 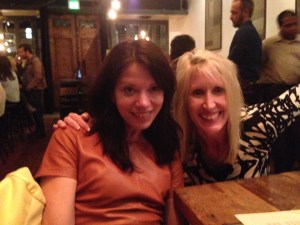 Verbena like Gather is not vegetarian, but with its plant-friendly menu, a full veggie or vegan meal excluding the tempeh burgers, rice and tofu or cheesy burritos that are often associated with vegetarian restaurants, is available.

Unusual ingredients are turning up on current menus. Among Verbena’s we spotted ovage, bottarga, nipetella, benne, oxalis on the menu. Curiosities aroused we ordered roasted button mushrooms accompanied by cauliflower, lovage and tomato vinegar. I have since learned that lovage follows capers and tea in quercetin so obviously, a healthy choice. 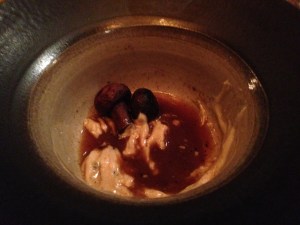 Sprouted seed bread surrounded by a spread of chevre and beet sauerkraut followed. Heavy with seeds, the bread chewier than a German rye, spread with a swath of kraut-chevra created perfect marriage between sweet and sour.

Cardoons and rhubarb with caramelized honey dressing and Douglas Fir yogurt nepitella (an herb of the mint family frequently used in Italian cooking) offered a study in contrasts—of taste more than texture. Not big on rhubarb, the only food I generally pass over, I was not the best judge of the dish, however, my fellow diners raved about it. 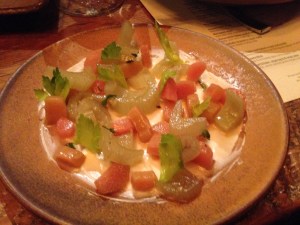 We moved through the four nameless sections of the menu with each section increasing in intensity. Three plates included, charred carrots with smoked cashew, lemon verbena, Perrine lemon-date molasses, asparagus with mustard greens, egg yolk comfit, bottarga, green garlic, and beets and strawberries with black walnut-beet miso (Baker is said to have fifteen misos aging in the kitchen) ginger, cress and oxalis. 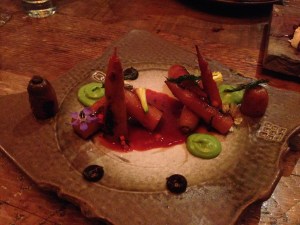 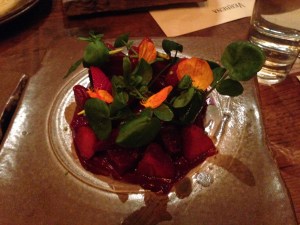 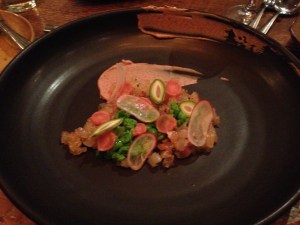 After ordering the beets I could not resist goggling oxalis on my I-phone. It is sorrel. I grow sorrel in my herb garden so I was more knowledgeable about its taste than I anticipated. Sorrel part of the knotweed family, as are rhubarb and buckwheat, is green and grassy with a lemony taste. For some it may take a bit of getting used to. I chop it up as an accompaniment to dressings, soups or toss the whole leaf in salads.

It turned out that every dish we ordered was composed of veggies with one exception. The King salmon tartar radish cured in lentil miso, with lemon and green almond slithered down gently, coating the palate with a taste that matched the touch.

Our dessert the pea tendril cake, came with a side of chamomile ice cream and rhubarb. Rhubarb again, but I have to admit this time I loved it! 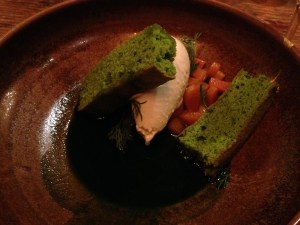 Why Verbena? I knew it as an herb, but a name for a restaurant? Back to google, getting the following information I understood. Verbena: an annual or perennial herbaceous or semi woody flowering plant that has been used among others, in herbals, teas, folk medicine, as a protection against spells, a dream enhancer and through out history associated with divine forces. It’s that last part: “associated with divine forces” that explains the name for me. When food is cared for so carefully, treated respectfully, honored as a gift from the mother (Gaia) that it is, the chef sets the foundation for a divine experience. Sean Baker’s work lives up to the name: Verbena.

A few days after our first meal, we had to return to San Francisco for an event. Following the event we headed back to Verbena. We started with the little gem salad. Dressed in pumpkin seed milk Beluga lentils rained over snap peas and avocado. Small glistening Belugas gently cooked to just the right texture added a caviar like element to the salad. Now I understand how a Beluga lentil is supposed to taste.

My partner went on to smoked duck wings slathered in kumquat hot sauce, celery and benne seed or, as we lay people say, sesame. He described the wings as tender, melting and chewy with the nutty sesame adding depth to the kumquat.

I could not pass up the seared artichoke, asparagus and snap peas dressed in black garlic and sorrel-pickled green tomato vinaigrette. Back in 1996 in a fine restaurant in old town San Juan, Puerto Rico I had a mushroom soup that left an indelible mark on my memory. That soup will now have to share memory space with artichokes, et al.

I was so impressed and taken up with the transcendent quality of Sean Baker’s edible art, I forgot to take photos on the second round!

On a final note, the vegetable movement clearly evident in the above menus is taking hold not only in the restaurant industry but in other areas as well. Recently for example, 60 Minutes aired a study of 1400 active and healthy ninety-year olds, living in the world’s largest retirement community, Laguna Woods Village in Laguna Woods, California. The three main reasons given by the retirees for the good life are regular exercise, a preference for vegetables, and the use of wine rather than chemicals for medication.

(Unfortunately, Verbena closed, the owners hired a new chef and renamed it Reverb. The menu has changed significantly.)