The first time I met Joshua Skenes in 2005 he was twenty five. Michael Mina had snagged him to open The Stone Hill Tavern at the St. Regis Hotel in Monarch Beach. Before coming to Stone Hill he had done stints with Jean-Georges Vongerichten in New York, helped open Troquet in Boston, worked under Anthony Ambrose at Ambrosia, and served as executive chef at Chez TJ in Mountain View, California. At Stone Hill just south of Laguna Beach, known for its paucity of upscale dining, Skenes, in my mind, turned the scene upside down with his cooking. I frequented Stone Hill in those days. When I requested an all veggie dinner Skenes came out to the dining room and personally consulted with me. It did not take long for me to turn my dining needs over to Skenes. He was tall, handsome and young. I knew this knight in chef’s clothing was destined. Not once was I disappointed, that is, not until he left to move on to his next step.

In 2010 I ran across Skenes again in the Mission District of San Francisco. My partner and I were taking a stroll when we saw the sign for Saison. The knight’s  ascension already underway, we had heard good things about the place. It was mid afternoon and with the café door open, I suggested that we take a look. We walked up to the doorway and peered in. A very simple place, not what one would expect of a restaurant that had fully straddled the top of the tower for discerning diners. At that moment Joshua walked out from the back, greeted us and started up a chat. He responded quietly and humbly when I told what I had heard about his new place and gently encouraged us to return for a dinner.

The third time I came across Joshua Skenes was when I began to consider a dinner at Saison the French word meaning season,  for my partner’s birthday. 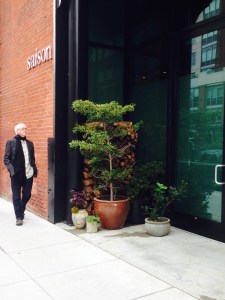 The knight had continued to move on and up and opened his own restaurant now located in SoMa and housed in the former California Electric Building. 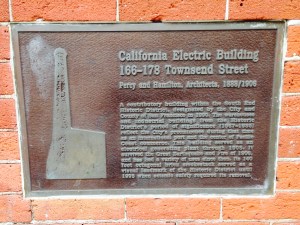 I read the press, scoured the reviews, checked out the menus and confronted the cost. The one thing that I had issues with was, and I say was because it has since changed is that Skenes originally ordered fish from Japan. That he no longer does may account for the fact that the menu price formerly advertised as 298.00 is now 248.00 He is/was not alone. Japan is in these days and, in my humble opinion, there is no fish market in the world that compares with the Tzujiki Fish market in Tokyo. It is worth a visit. Go soon if you want to see the old as it is slated for relocation – still in Tokyo – and the old site will become a development.

Skenes has explained some of the reasons behind the high costs of his current menu. He has twenty-four people working in the kitchen, including a full time forager, nothing is used, redone, or served from the previous days menu, and the restaurant is limited to eighteen seats. Everything is made fresh and from scratch. In this line a friend who owns a small restaurant in the OC once told me that every time the menu changed as in seasonally, it cost the restaurant 4,000. In this place, the ingredients are not sourced in the special way that Skenes sources.

So I hemmed, hawed, and fretted. Some of the best food in the world comes at a hefty price. If I have the best I want to experience  a combination of taste and art that stirs up my creative juices  so much that I can hardly wait to go home, enter my own kitchen and create. I had similar feelings about art when I was an art’s writer reviewing exhibitions. Food prep and service is a relatively high art form! My resolve to let go of the dilemma drama, go on line and set up a reservation met with another challenge. Reservations are held at Saison with the agreement that if a diner cancels less than a week before the dinner date, the full price is charged. I suspect this is the reason it is generally possible to get a reservation during the week without too much long range planning. Of course if the Michelin Guide 2015 to San Francisco that comes out on Oct 21, gives Skenes three stars that may change.

A week and a half before our dinner date, I got a call from Saison in the late afternoon on my voicemail. The person on the other end reminded me of my reservation and asked me to confirm. Unable to call back that day during business hours I planned to return the call the next day, but before I could I received another. This one I answered. The pleasant woman on the other end reminded me that I had three days left in which I could cancel with no penalty. She also inquired if there were any special food needs. Yes. We do not eat meat, but on rare occasions, fish.  She assured me that that would not be an issue. The chef would prepare accordingly. It is rare to receive such an attentive call from a restaurant, but we were going to dine at Saison.

On the website, it is explained that Saison has no dress code. It reads, “Come as you are.” I must admit I was tempted to go in my pajamas! It was a Wednesday night when we ubered over to Saison from the Harbor Court Hotel on the Embarcadero. I had dressed appropriately (no pajamas). We arrived a bit early so as to avoid another restriction on the dining. If a diner arrives later than the reserved time, he/she will be seated, but if courses have already been served, the diner will start with the current course. Past courses cannot be made up!

We stood outside waiting for the restaurant to open as we usually do when our reservation is for 5:30. When other diners arrived and walked into the restaurant  we realized the doors were open. (Chagrin). As we entered the hallowed space we were greeted by a framed wall of firewood. 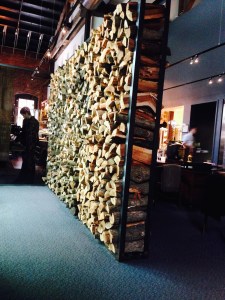 A man in a black suit seated us at a table in the bar. We sat there for all of two minutes when another man in a black suit came to escort us to our table. He told us that we were to think of ourselves as having dinner at a friend’s house.  I appreciate that an attempt is being made here to make the guests feel comfortable, without the “stuffiness” of a fine Michelin double starred restaurant. However, with the staff in black suits or designer chef outfits, I did experience a certain formality. Nothing wrong here, just it is what it is. 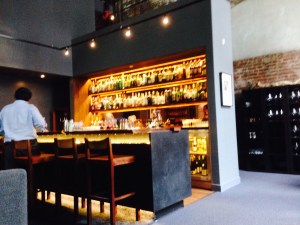 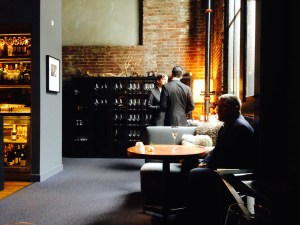 We sat in full view of the kitchen. One can actually walk through, as there are no restrictive walls or gates. Along the side of the dining room I took note of a series of slick coolers. I assumed the wine cellar, but our waiter explained that they were the refrigerators. Again, placed in the dining room as part of the idea of dining in a friend’s house. 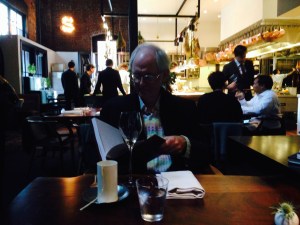 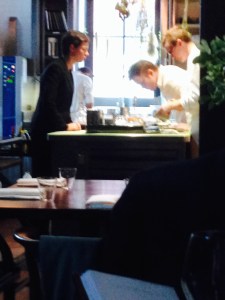 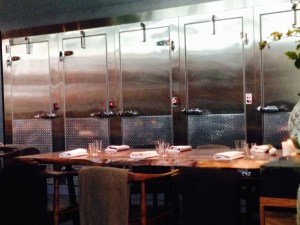 The first course was tea served in a small, tubular porcelain glass. A tied package of herbs and flora from Saison’s garden hung over the edge of the glass. We were encouraged to steep them in the hot water for as long as we wished. My palate was soothed by the subtle flavor and yes, I felt like I had been served a cup of tea at a friend’s house. Now, relaxed and comforted I was ready for the meal to begin. 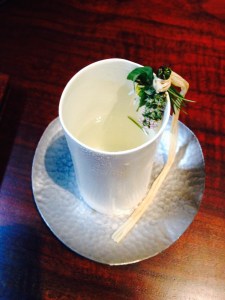 The fourteen courses that followed were served with clock-like precision. At first a gentle flow like a quiet stream, it opened to a river of wider possibilities then gradually concluded with dishes that quieted the awakened palate to allow the diner to relish and munch on inner, reflective musings about what had just occurred.

Tomatoes in a few forms in corn pudding and black mint. 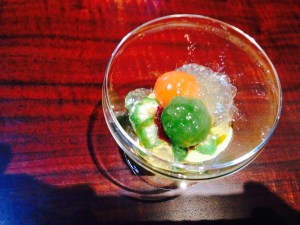 Artichoke stuffed with scallop with sauce of grilled artichoke. 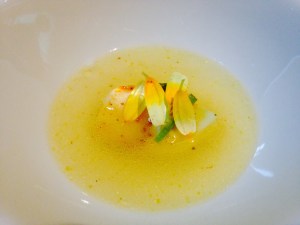 Diamond turbot with a sauce of grill bones.

I inquired about the source of the Talbot and was told that it came from Korea.

All other fish dishes came from California. 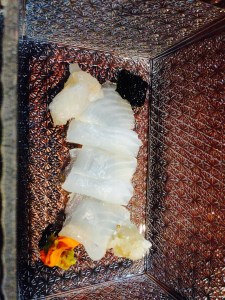 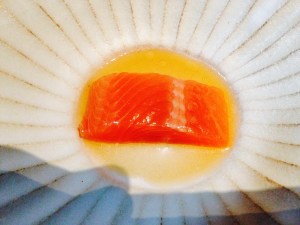 Abalone roasted over the embers, sauce of the liver and capers. 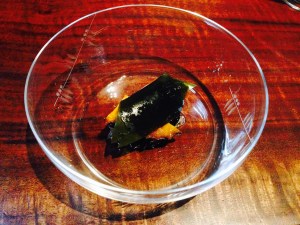 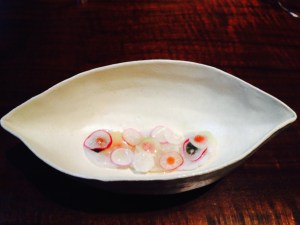 White sea bass, roasted over the coals, sauce of citrus leaves and yogurt. 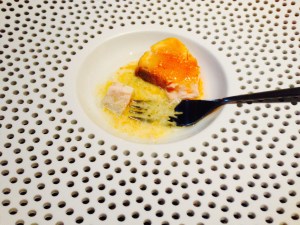 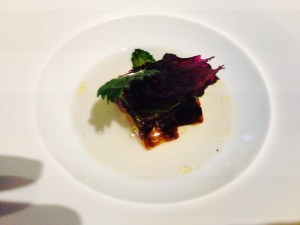 Toffee, milk, bread and beer. In my excitement, I forgot to photo. 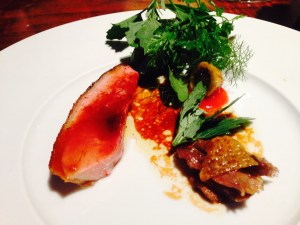 Pickles, a bouillon of the grilled duck bones. 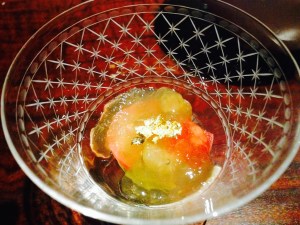 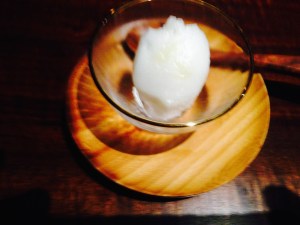 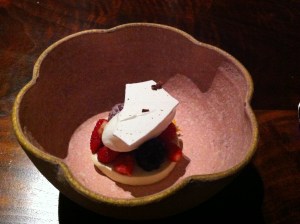 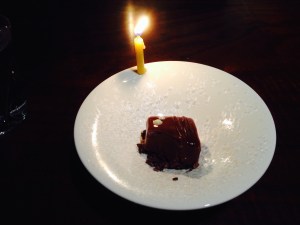 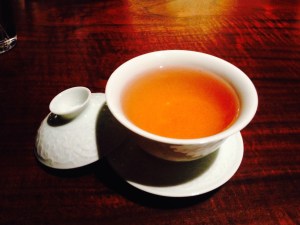 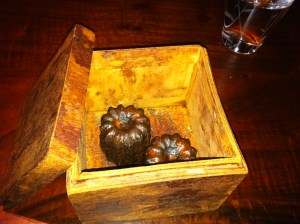 The influence of Japanese cuisine was surely evident. Silvered handled chopsticks served as dining utensils for the first six courses, to be followed by traditional for the remaining courses. Our waiter shared that the chef had recently returned from Japan where he had spent his honeymoon. 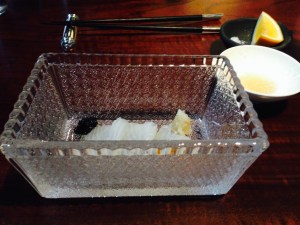 Less than half way into the meal, the server brought a lovely platter of Parker House Rolls, the best Parker House Rolls in my memory. I generally do not eat flour, but in this situation I could not resist. The jagged sea salt twittered buns changed my history with Parkers. So good, we unabashedly and to the surprise of the waiter ordered another round. After the first round I referred to them as a course, but the waiter said no, that they were brought out as they come out of the oven. 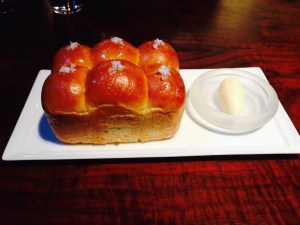 That Parker House Rolls served in the midst of such a delicate, well designed work of art  felt both like a nod to the history of American cooking as well as  a bit of humor injected into the seriousness of the production. I paid dearly for my over consumption. It left me with that full feeling that accompanies over consumption. Next time: one order, please!

As we sat discussing our meal with a diner at the next table, a waiter brought a final treat: two muffins from Boulette’s Larder in the Ferry Building for a midnight snack or breakfast the next morning. Soon our head waiter came along and invited us to walk over to take an upclose look at the kitchen. When he asked us to take all our “things” with us I felt it was a most gracious way to tell us they needed the table.

The Knight in white. 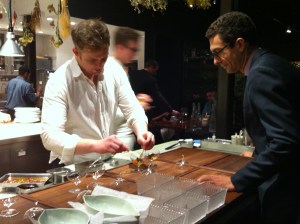 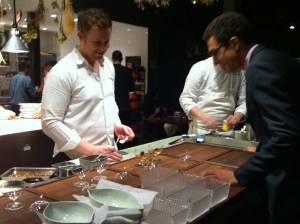 How do I feel about Saison? What moves me most is the young chef’s intention to serve the highest quality food he can possibly find along with his vision and an amazing skill-set to create his art. In my research I came across a telling story about Chef that illustrates his destiny and skills early on.

“When I was about nine, my family sent me to summer camp in North Carolina. I went on a long hike and saw a water moccasin. I fished the snake out of the water, cut his head off, took out the poison sac, filleted the snake cooked it up and fed it to the camp. I can’t believe I didn’t poison everybody.”

That one blew me out of the water along with the moccasin!

I loved the food, the ambiance of the restaurant with the use of wood, stone and steel, and the over-all integrity of the performance. If I have any misgiving, it is only that I want more people to share Skenes cooking. As it turns out that will soon be possible when he opens Fat Noodle a fast food joint that he is undertaking with Adam Fleischman of Umami Burger. Hand pulled noodles, wine and beer available, priced from six to ten dollars, open  11 am to 2 am is the intended norm. Can hardly wait!