As we were crossing the new Oakland Bay Bridge yesterday I opened my iPhone and hit on Google. My job to look for a place to have lunch could not have been easier. With the depth of delicate morsels at Saison lingering on my palate, a long finish indeed, I came across news of the soft opening at Les Clos a new wine bar, café, coffee house on Townsend. Surely a cosmic hand was at play. The opening would run from ten – three. My clock read 1:00 pm. We descended from the bridge and headed straight for the opening.

Here’s the cosmic part: Les Clos is under the ownership of people from Saison. When I wrote the recent post for Saison I kept my attention on the food and chef – not beverage or wine director. Later, I debated with myself about the possibility of doing a second post on the latter, but when Les Clos did a pop-up on my Mac, the debate resolved itself.

Mark Bright is Joshua Skenes’ business partner and Wine Director at Saison. He comes in with a history in wine as impressive as Skenes in the culinary arts. It is in his stars to illuminate our path to understanding wine. His began at Aqua in the Bellagio, Las Vegas at seventeen while, he attended the University of Nevada, Las Vegas. Can you imagine what it must be like to study food and beverage in Las Vegas? Later, working for Michael Mina he did a stint at Stone Hill Tavern in Laguna Beach as did Skenes. The list of hi-end restaurants where he has worked or consulted is endless, not to mention his own consulting firm: the Bright Wine Fund.

For me what is of consequence about Bright is that he has had an almost single-minded concentration on burgundy, (but I hear an expansion is in the works) of which he has amassed a legendary collection. When those in the business focus in, Ceri Smith is another with her attention on Italian wine, like old vines, they run deep with knowledge, expertise and the juice to make connections that open doors for the rest of us. When I started to get to know wines, I depended on the folks at Hi-Time, K&L, California, Sherry-Lehman Wine and Spirits, New York, Schaefer’s, Chicago, among others to show me the possibilities. Now that America is finally developing a palate, there is a vacuum longing to be filled by people such as Smith and Bright.

At Saison, a wine pairing can include ale, sake and wine. In my growing age, I must sometimes take heed so I chose not to do the pairing the night of our meal. (A recent survey by Robert Smiley at UC Davis taken among twenty-six heads of wineries   indicated that, while wine consumption is declining among baby boomers, they are passing the glass on to the millennials.) Instead, I chose a glass of Chablis that paired well with every dish, my partner a Volnay. 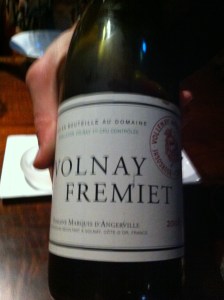 I did not do the pairings but I had been duly impressed by what I read about Bright’s expertise and collection of Burgundies. I can now look forward to learning more when I visit his latest project: Les Clos. Forty wines-by-the-glass ranging from $10 – $25 dollars will be offered. Tastings and classes are also in the works.

We pulled up in front of Les Clos about 1:30. Plenty of parking spaces for mid-day were available despite the fact that we were around the corner from the AT&T Park where dozens of sightseers were milling about. A wood-hewn bar with stand-up cylinder seats formed a well-designed frame to the entry. 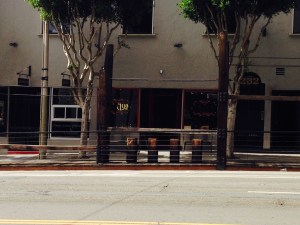 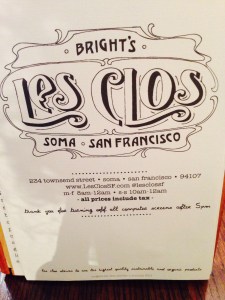 We walked in to an empty café save for a single dude dining solo at the bar. I thought I was in a neighborhood spot in Paris! 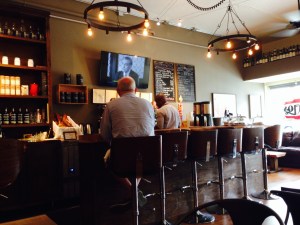 After all, this was a soft opening. Giddy over such accessibility to the café, I reminded myself that the odds are that never again in this lifetime will I arrive to an empty Les Clos. After snapping some shots we sat down to a table just  big enough to handle cups and glasses and maybe food. 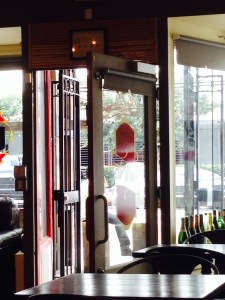 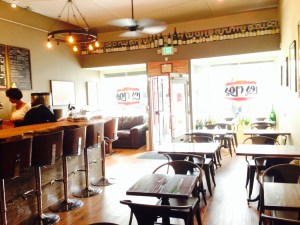 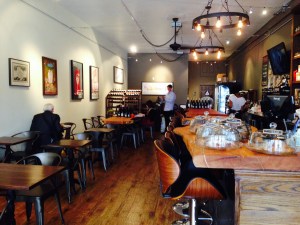 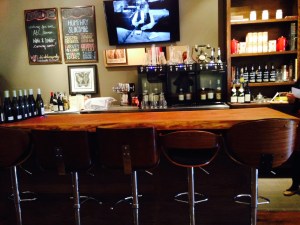 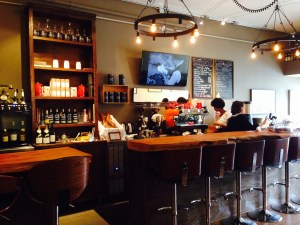 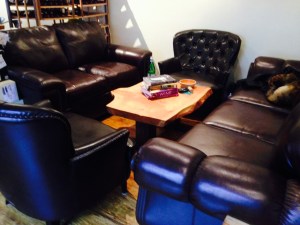 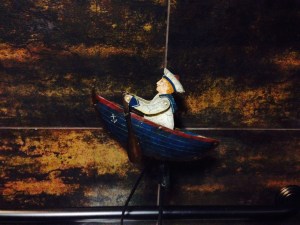 A few employees shuffled about taking care of initial projects such as filling wine racks. Hopefully, some of those hard to find Burgundies to be found in the Bright collection will be available. I thought I saw Cara Patricia Higgins the sommelier and also from Saison floating about. 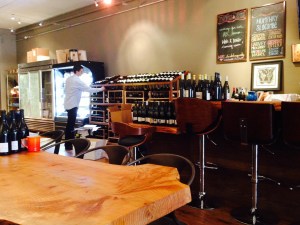 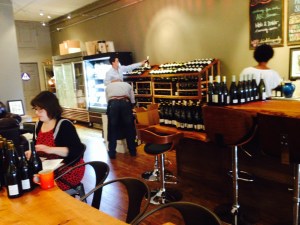 A third alum of Saison cellar master Shawn Gawle, is leading the kitchen. As with the others, his background is stellar: Food and Wine’s best pastry chef in 2012. Did stints with Chefs Jean-Marie Lacroix, Joel Rubochon, and Gras. The latter allowed him to spearhead the dessert menu although he had trained in savory.

The best part of eating at Les Clos is that while quality is Saison-like, style and price are more beer pocketbook. Pastries from Le Maraise Bakery, coffee from Spyglass and ice cream from Humphrey Slocum add prestige to the larder. Charcuterie, cheese, escargot, caviar, gnocchi are planned for the menus. 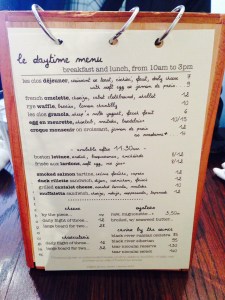 Although wine was not available for our lunch as Les Clos awaits its liquor license, expected to arrive later this week we were shown the menu. 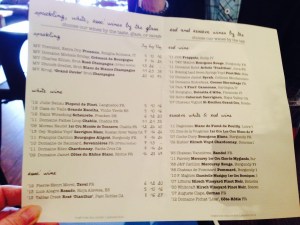 I had a salad and a cut of goat cheese sided with a swath of honey, my partner the duck sandwich on Josey Baker Bread. Salads that are simply composed of the best greens available ever so slightly slicked in olive oil and an acidic complement, topped with a twitter of fine salt are among my all-time favorite dishes. In fact, so much so that the quality of a salad is often my subjective test of a restaurant. Les Clos passed. My partner loved his duck sandwich, somewhat of a combination-like rillete and pureed liver he agreed that it too, made top scale. 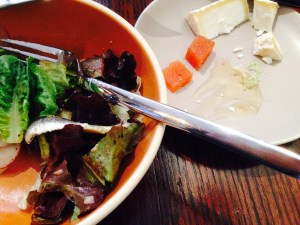 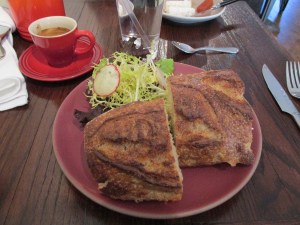 When things are in full swing, Les Clos will be open from 8 am to midnight during the week and open at 10 am on weekends.

I will be back even if I have to negotiate the crowds. 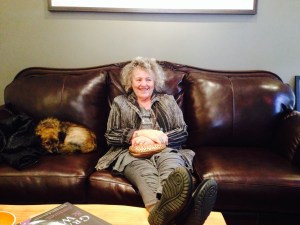