I am having one of those days! Ideas hopping around in my head like jumping beans dancing on a  hot griddle.  The Tibetans would say that my mind is full of wind.

Before I throw myself to that wind, a short follow-up to my session with Dr. Hung the plastic surgeon who removed the brown blotch last week. We had a second encounter this morning at his office in Costa Mesa. I could not help commenting again on the Beethoven playing over the sound system.

“Still listening to the same music.”

“Yes, but next time you come I’ll try to have something to your liking,” he responded.

“How about some Native flute music,” I queried.

“But that’s not what we grow up with,” he responded.

“They would tell me that they did not come here for a sweat lodge,” he proffered.

In our extended minute or two, the plastic surgeon, remembering our discussion of the previous week zeroed in on a topic of interest to both of us. We had barely started our dialogue when he had to take his leave for another patient. My wound handled, conversation hanging mid-stream, I felt impelled to reach out to shake his hand, but he was out the door before I could act. Left alone in the cold, silent room I wanted to call him back, invite him to continue over a cup of tea. I had made a connection bordering on friendship.

I felt so healthy as I left the office.

I received two emails yesterday, one from Johnny Jet’s travel blog; the other from the Buddhist Publication, Palpung containing an essay on the Buddhist Eightfold Noble Path. Both offered insights on travel modes–miles apart, one practical, one esoteric.

Johnny offers tips for the more prosaic form of travel. The only travel blog to which I subscribe, he knows his stuff, is an especially good source for someone who is new to or rarely travels, and helpful for the experienced traveler as well. I have been asked to do workshops on travel, ticketing, packing, none of which I have done so far. Instead, I refer people to Johnny Jet.

It was the discussion of wheels that drew me into the essay in the Palpung email. My wheels are my Prius, so I thought. When I need to travel locally I slip into its embrace and off we go. Having accumulated 230,000 miles together we have become very close friends. It takes me anywhere I want to go and I am comfortable with the quiet way it rides not to mention the 48 mpg. My mechanic tells me he has seen the same model with 500,000 miles. So I am hoping that the two of us will make a go of it for the rest of this lifetime – it’s or mine.

When the email from Palpung arrived, I realized that I had several sets of wheels not as tangible as the Prius, but none the less, practical. The author, a Tibetan Buddhist lama, wrote that the Buddha’s teachings are called “the dharma” and that the symbol for the dharma is the wheel. I have seen this symbol on temples and monasteries throughout Southeast Asia. This particular wheel has eight spokes symbolizing what is known as the eightfold way. According to this view each spoke is like a wheel that can take us, not to earthly sites, as does the Prius, but to enlightenment.

My imagination went wild when I thought about it. I love the idea of having wheels that could take me to enlightenment; my Prius has some limitations in this area.

As I reveled in my newfound realization a funny thing happened. The inner wind began to stir along with its concomitant visions. Like a rising sun, an image of a Native American frame drum ascended in the space in front of my minds eye. Round, covered with animal skin, probably deer, several spokes radiated from its center to its outer rim.  Each one held a shimmering neon sign that named what I would now call, a wheel to enlightenment.

Eight-fold Path read one spoke, Yoga Sutras of Patanjali another, St. Ignatius Thirty Days, Mayan Scripts, Gnostic Gospels and those of the four evangelists, Koran, the Medicine Wheel, the Nine Ways of Bon, the I-Ching, there were several—each flashing the name of a practice that if given due diligence, could serve as an aid to enlightenment. In the mind’s eye, the drum, large as the universe embraced several traditions under its umbrella-like head.

While I have been a life-long student of various traditions I had never thought of them as “wheels.” Practices of the traditions as seen within the vision of a simple frame drum created a startling,  “AHA.” The metaphoric image grounded the esoteric modes in the here and now to simple ways and means that if I let them, could turn me to where I needed to go.

As my mind followed the wind and the visions, I understood. All of us can be tourists; all of us are travelers. Discernment is in knowing the difference. 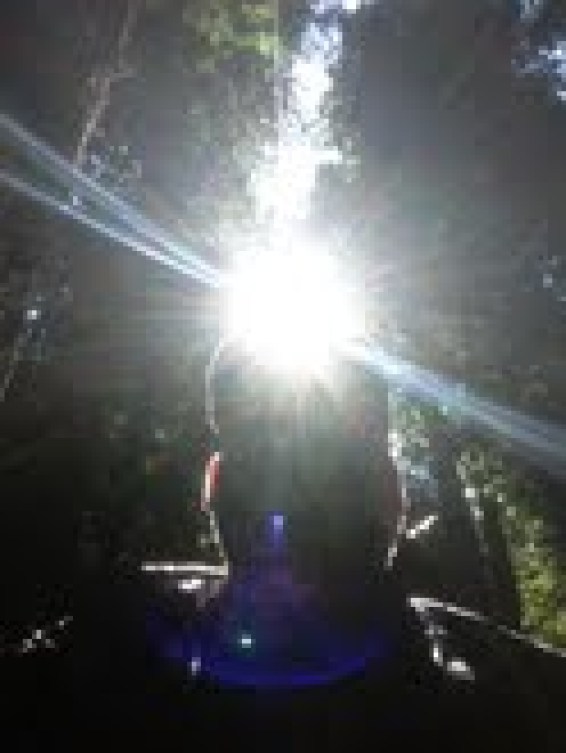