Another short appointment with the plastic surgeon this week:

“So, today you are playing opera.”

“Today’s choice is much better than the Beethoven. Appeals to and soothes the heart, much better for the doctors office. By the way, I thought about the music of Eric Satie. I think you might like him,” I was about to pontificate, but he stopped me.

“I am not even interested in this,” he countered.

He took out a few stitches then as he cleaned up he surprised me. “What was the name of that musician,” he asked.

“Eric Satie. Google the name, you will find several You Tube videos.”

Pencil and pad in hand he wrote the name down then left the office forgetting to say good-bye.

It made sense that I would have a vision as recounted in the last post, of a universal drum one so large that from the mind’s eye point of view it seemed to fill the heavens. Drums and drumming have been a part of my life for four decades.

The drum is the oldest instrument. For all seasons, times and places, in every culture it has a place. It has been used for ceremony, communication, dance, movement, and travel. Yes, travel, but more about that in a minute.

My first experience with drums happened on a visit to the Taos reservation north of Santa Fe in the mid seventies. While we were making our way around the area I noticed a commercial drum store with various sized frame and ceremonial drums peeking through the windows. At the time a drum seemed the perfect souvenir to take home as a reminder of the New Mexican landscape and its indigenous peoples living along the Rio Grande.I purchased a small ceremonial drum; brought it home knowing intuitively that it should have a place of honor. I could not bring myself to turn it into an end or coffee table as I had seen some do. It sat in my living room silently drumming; I swear I heard it on a regular basis, for the next ten years.

Then, one day a Mohawk shaman walked into my life. During the following year she taught me how the Six Tribe Nation used tobacco in rituals and purification ceremonies, both accompanied by a slow sonorous drumbeat. For her life without a drum was unthinkable. She carried it with her wherever she went. That was when I took to my ceremonial drum, beating slowly, quietly, alone in my living room.

Guyandulas taught me about drumming the heartbeat. Lub-dub, Lub-dub. She explained that when we drum it we develop a feeling of oneness with everything. Everything in the universe from the smallest particle to the largest planet to the stars has a rhythm each thing has a heartbeat. In drumming we become a single being with a single heartbeat. The one note of the heartbeat brings all the discordant notes into harmony and balance. 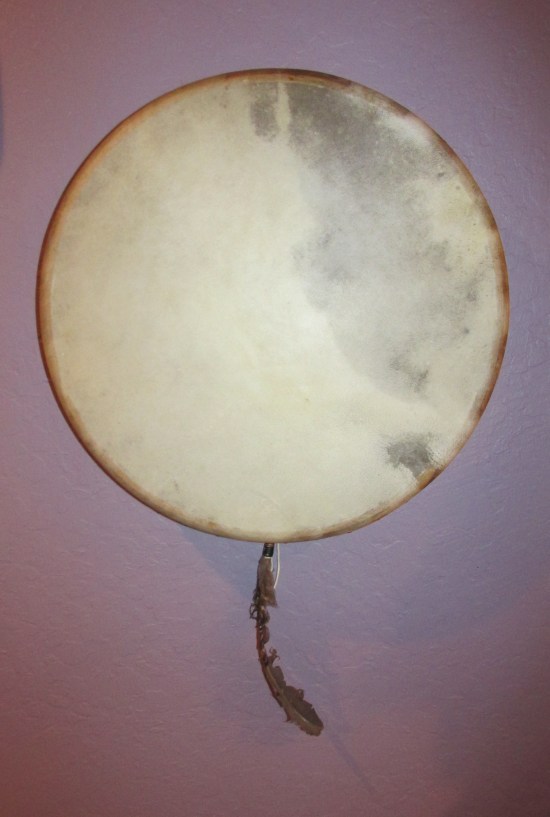 Later, when studying sound healing I learned about entrainment and how the rhythms of the body can be changed with sound. More powerful rhythmic vibrations of one object can change those less powerful of another object. We know that we can change our brainwaves and heartbeat with sound. Resonance and entrainment are the basis of sound healing. Different brainwave rates correspondence to different states of consciousness based on cycles per second or hertz.

4-7 that is states of deep meditation, sleep and shamanic activity

By changing our brain waves we can induce mystical states. I know this is true from my experiences with drumming. The above also helps to explain why shamans have used drumming as a means of travel through trance for centuries.

The slow steadiness of such a rhythm such as the sound of the heart is the lullaby of the cosmos. Repetive nursery rhymes, Mary Had a Little Lamb that we repeated over and over in our early years mimics the heart’s repetitive sound. Drumming the heartbeat takes us back to the first sound we heard, our mothers heartbeat and it takes us deep into our mother Gaia’s heartbeat. When drumming is done at 72 cycles per minutes for babies, they quiet. As we go deeper into the lub-dub we get in touch with the diastole and the systole, the poetic rhythm of the heart. It opens our consciousness out into enormous, unbounded space and the draws it back into itself.

As the years have passed the walls of my living room became the host for a drum library. The etheric sound is continuous. As said above, the note of the heartbeat brings all the discordant notes into harmony and balance and through vibration it carries from right where I am to the furthest reaches of the universe.

A trip well worth taking.