The personal comments on some of the recent posts have been ranged from fascinating to hilarious. One friend said that she was “shocked to hear that I had been away and that she had many questions to ask about the Stan’s.  Another told me he was confused. So am I. Just kidding.

So, the following is the continuation of the musings of an astral hyper-looper as she roams through Kyrgyzstan. Best to read the former post if you have not already done so.

Rustam stood near the door holding the reigns to two camels. Not the shorthaired, one-hump dromedaries I had seen in Egypt, but the two humped, two-haired Bactrian’s indigenous to Central Asia. 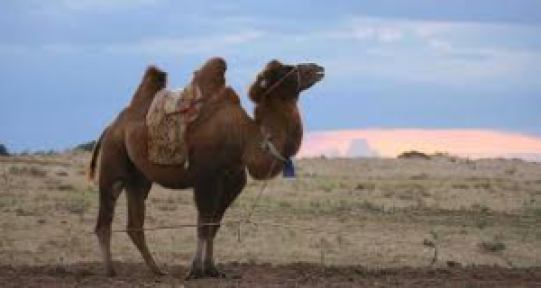 With a kalpak on his head, the traditional white wool hat worn by Kyrgyz men, he had the look of a royal.

In his hands he held a pair of long stocking-like socks that he said were to protect my legs against the camel’s hair.

He must have noticed the look on my face, I imagine somewhere between surprise and trepidation, because he told me that riding the camel would be easy, that he had taken several tourists on rides with no issues or injuries. I can’t say that I felt comforted, but I did feel some excitement knowing that I would soon be in the company of Marco Polo, Lawrence of Arabia, Indiana Jones, and Peter O’Toole. I had read how, during the filming of Lawrence of Arabia with his bottom bleeding from riding, the latter went to Beirut and purchased rubber sponge to serve as a saddle. When his Bedouin companions noted the comfort level, they too began to use the rubber.

Rustam told me not to be afraid, as the camel would sense my fear. Easier said than done, I called on Kali to give me some of her power, and then stroked the camel to show that I was not afraid. I made sure not to stand in front of its mouth to avoid the shower for which camels are famous. 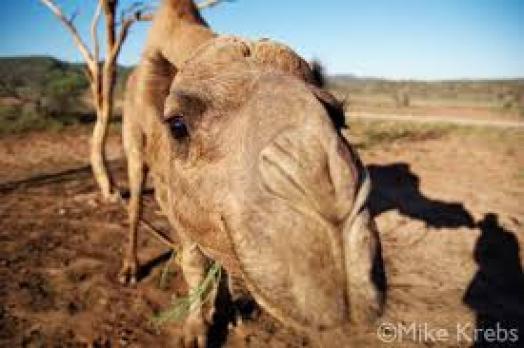 Rustam brought it down on its knees to the traditional posture for mounting so that I could get on, and told me to swing my leg over the back hump and mount in one movement. As I am not tall enough to make it over the hump he placed a stool to stand on. Taking a swing with my right leg I managed the mount. As the camel raised its hind legs to stand up, I would have flipped off were it not for the front hump. I threw my arms around it and held on for dear life. Everything especially my bottom fell comfortably in place when he raised his front legs.

Rustam mounted the other camel, waved to Mierum and we set off down a wide path toward the mountains. My camel followed. It did not take me long to realize that I was atop a push button camel, mild and quiet, not the kind I had seen in Tracks, the book adapted movie about a young woman who crossed Australia on a camel. Rustam told me that a few years back a Russian Orthodox monk had come down from southern Siberia to rest and restore his health in the healing warm waters of Issul-Kyl Lake. While he was there, he spent quite a bit of time with the camel. It had a high-spirited nature, hard to hold down, and not in the least people-friendly, but over the course of the monk’s stay it became docile and gentle. I thought of the poverello. The monk sounded like a reincarnation of St. Francis of Assisi. Beginning to feel a little more reassured I relaxed and got into the swing of the camel’s rhythm.

As we headed toward the mountains and I wondered how we would manage the steep stone slopes just ahead, when Rustam made a sudden turn through some tall bushes onto a side path. We rounded a short bend and climbed for several minutes through a thick forest to where the path opened onto a beautiful gorge. We climbed down and continued along a river. 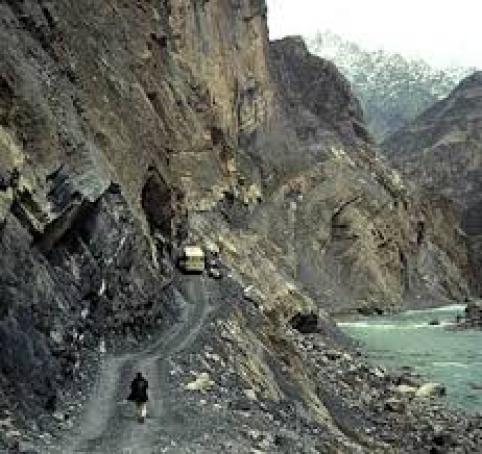 It had been years since I had been on a horse and I was beginning to feel an aching in my thighs from the unusual posture. I was relieved when Rustam said we should take a break. He disembarked then helped me to get down. We sat on a large boulder overlooking a lovely valley. Mierum had sent a snack, which Rustam opened. He offered some dark, dried strings of something I did not recognize. When I hesitated, Rustam said it was dried camel meat. I licked it gingerly. After finishing his, Rustam took off on a stroll downstream saying he would be back in a few minutes. I assumed he had gone to take care of private needs. When he was out of sight I tossed the jerky into the stream. Just too much for my inner vegetarian to digest.

A whistle like familiar sound called out from behind where I sat. I turned in its direction to see a myna sitting in a bush about thirty feet away. With a yellow patch around its eye and yellow legs I recognized the same bird I had observed in India. When I looked it in the eye, the myna began to screech. Having observed the scene with the camel jerky and while not exactly begging, I assumed it wanted some food. Rustam suddenly appeared and the bird flew off. 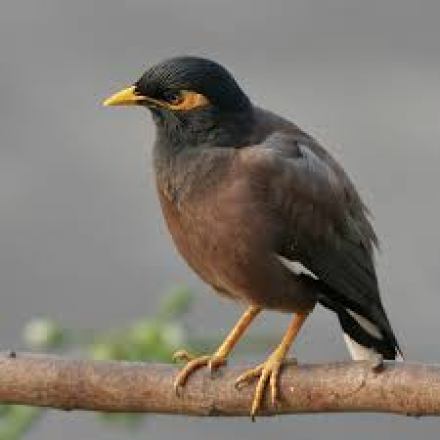 He said it would take us about an hour to get to the yurt camp. From there his friend would drive me to Osh. Not since my last trip to the Andes had I felt such grounding as well as the uplifting that emanates from soaring mountain cathedrals. As of late I had been somewhat Piscean in my relation to the world, spacing out, forgetting appointments. I knew of no better tonic for my lack of focus than soaring mountains. I recalled a Native American spiritual teacher who several years earlier had described mountain meditation as a means to balance the four elements in the body. “Sit as though you are a mountain,” he advised. I tried to follow his counsel as a rode through the gorge.

When we pulled up to the yurt camp, Rustam hailed the driver. As soon as I got down off the camel, Maxence, a friendly fellow, offered me a bottle of water and opened the door to a jeep. Although his English was not as good as Rustam’s, I understood him. I could not thank Rustam enough for all he had done. As the jeep pulled away I leaned out the window and waved profusely. Rustam left my life as quickly as he had come in.

I was so engrossed in enjoying breathtaking views of the Pamils that I lost tract of how long it took us to get to Osh the southern capital of Kyrgyzstan. As we rode along the name Osh…sh…sh, began to speak to me as had the sound vibrations of Baku on the trip to Azerbaijan, in a rising and falling pattern. Osh: ah ascending, sh descending. I repeated Osh like a mantra over and over.

I had looked forward to visiting the Silk Bazaar on the famous Silk Road in Osh, but the moment Suleiman Too, the tall mountain that rises up from the center of the 3,000 year old city, Osh, came into view the thought of the Bazaar disappeared. Rustam had told me some of the stories about the mountain as we camel trekked through the Fergana Valley. When he described it as a sacred mountain; I felt the hair rising on my arms.

As we got closer I noticed patches of red poppies carpeting spaces between the rocks. As in California, they bloom in spring. The mountain-peaks, five altogether, etched a jagged line across the sky that reminded me of Mt. Tamalpais. I reasoned that a slumbering goddess must live here as well. 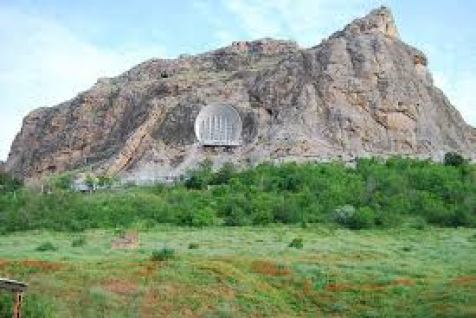 Maxence broke my reverie. “The mountain,” he shouted with pride. “The mountain that stopped an army. When Solomon reached the mountain, he ordered his soldiers to stop. Enough! Such a powerful mountain.” Maxence thoroughly enjoyed extolling the miracle of Osh.

At my request he dropped me off at the foot just below the museum that had completed in time to honor the 3000th anniversary of Osh. Before he drove off, he suggested that I stock up on water if I decided to climb to the top and he warned that as there were no lights along the paths that I come down before dark unless it were a full moon night. I thanked him and gave him ten dollars that he assured me he could exchange for tyiyn at his local bank.

I climbed up to the museum, a cave cut into the mountainside and enclosed with a large glass wall. 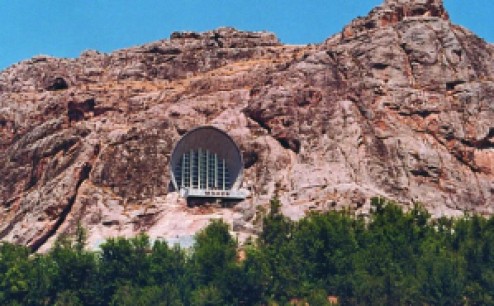 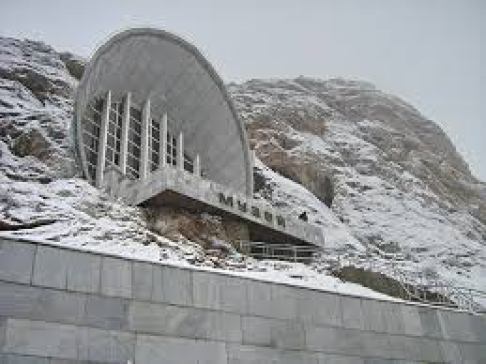 As I entered, a receptionist greeted me, but she did not speak English. She pointed to a wall mount that offered a few meager facts. I took a quick glance around – lots of old objects, many of which I had no knowledge – then went out to an outdoor viewing site where I sat looking out over the city of Osh.

Like all sacred mountains and as I had gathered from my pre-flight research, Suleiman Too was couched in history and legend. Reminiscent of Sinai, a holy place where a prophet met with the deity, the same is said to be true of Suleiman. On this mountain Solomon spoke with God. Following the human-divine encounter, the mountain became a site for Muslim pilgrimage and continued as such for at least 2500 years. In the sixteenth century, Babur, founder of the Moghul Dynasty, built a small cell with a mikhrab. Today, a white mosque and a replica of Babur’s house have replaced them.

All of this had been preceded by cult worship now witnessed by many caves and petroglyphs. Suleiman Too is said to have been the ancient site of a fire temple stemming from the work of the Zoroastrians. Stories of cures for all sorts of ailments have been recounted. 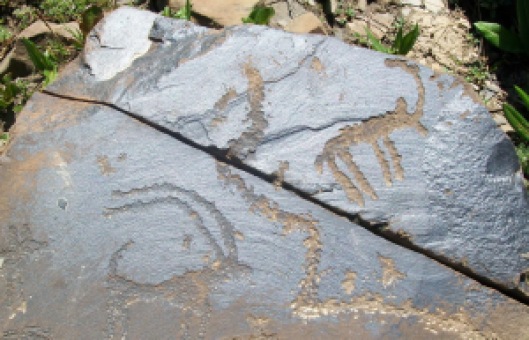 I spent time reflecting on the history, but mainly I inhaled the energy of Suleiman Too feeling calmer, quieter and more energized with each breath. I felt uplifted, as though I were levitating, but my feet never left the ground. I knew I had to climb to the top. Maxene said it would only take about twenty-five minutes. Once there I would honor the deities of the ancient cults and traditions who resided in this strange and wonderful place and the mountain, deity in and of itself. Regretfully, I had no white sage from the southwest to burn, but no worry, they would understand.

In The Ascent to Truth Thomas Merton writes of how distractions divert our attention from what matters. As I ascended, distraction gave way to endless view, unbounded space. When I reached the top, I had arrived in more ways than one.