After a return from the trip to Azerbaijan (See Land of Fire) last month it took but moments for the body to readjust and land on solid ground, the mind a bit longer. As images of fez headed Azeris and natural fires gradually receded, the smell of oil haunted my olfactory sense, while resident flecks of dust twirled in by winds from the desert continue to tickle my throat. Memories of the trip lingered like a long finish on a good orange wine, but even a good finish dissipates, and as impressions fell into oblivion the inner traveler began to grow restless. A trip to Poland had been under consideration, but surprisingly, “she” wanted to return to Central Asia.

As I pored over a map of Central Asia, for the first time I wondered why “stan” suffixed the name of seven countries. With Google’s help I found its meaning. “…The suffix “stan” is an ancient Persian and/or Farsi word meaning country, nation, land, or place of…”

Turkmen means “I am a Turk,” but interestingly, in the land of Turks many are from other countries. Uzbek: a “genuine man.” Uzbekistan, the nation of genuine men is a mix of nomadic tribes, Russians and ancient Iranians. Tajik: a person wearing a crown on his head also a mix of ethnic groups. In old Turkic Kyrg means forty. Later the language referred to “Land of Mountaineers. I found a fascinating history of its etymology on Wiki.

I would have continued into the histories, piecing the meanings together, but when I checked out Kyrgyzstan, a plan began to take hold. The thought of a country dominated by mountains and lakes had a faire appel. After the natural gas burning outlets in Azerbaijan I could welcome the energy of the Tian Shan and Pamir ranges of Kyrgyzstan. The thought of Tian Shan with Victory Peak towering over 24,000 feet, referred to as celestial, heavenly, god’s mountains made my heart soar.

After four plus decades of world travel I may read a novelist, but rarely do more than a Google or two on my intended destinations. I have learned that I will get what I’m supposed to know, meet with whom I am supposed to meet when I arrive. In the case of Kyrgyzstan however, my knowledge bank so meager, I decided to visit a bookstore. The store was stocked with a plethora of guides, but aside from a thick Lonely Planet devoted to cities around the world each with a couple photos, “stans” included, no guidebooks available. Amazon not much better, it was becoming obvious that Central Asia is relatively unexplored. Back to Google.

The history of the Kyrgyz people held many surprises: Old Tang dynasty texts described them as having “red hair and green eyes, (from Siberia) while those with dark eyes were said to be descendants of a Chinese general.” Other sources claimed that the “Kyrgyz tribes were described as fair-skinned, green- or blue-eyed and red-haired people with a mixture of European and Mongol features. At the beginning of a foray into a complex history, I wondered what the contemporary Kyrgyz would look like.

One evening after a session of deep academic study I turned off the computer, laid my head on the pillow of my Relax the Back Chair and closed my eyes. Long past midnight a hushed quiet had settled over the trees and field outside my study window. Astral hyper-looping unlike other modes of travel does not depend on ticketing or plane schedules, but rather on the intention of the traveler. As I unwound from my day the travel engines began to churn. I turned inward toward the vacuous space in front of my mind’s eye, which yogis refer to it as the door to the infinite. Mystical sounds like that of evening song birds began to emanate from the void. I felt a slight lurch.

Opening my eyes I was standing on the edge of a vast endorheic lake. A light balmy breeze teased my hair, soothed my body. My feet were comfortable in spite of the pebble-filled grainy sand under my soles. I edged forward a few feet and gingerly touched the water with my big toe. I knew that hot springs fed into this lake, but with endless layers of the snow covered high peaks of the Tian Shan Mountains framing the distant skyline I expected icy. I cupped my hand, gathered a bit of water and lifted it to my lips. Warm and slightly salty like the Caspian Sea, I thanked the guardians of the lake for their offering. I knew that pollution is a concern, but the lake is well known for its minerals and healing ability. 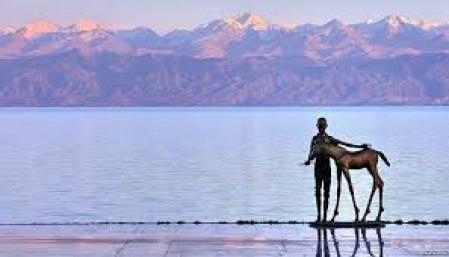 I marveled as I stood on the shores of the second largest alpine lake in the world (Lake Titicaca, the largest), Lake Issy-Kul.. Were it not for the snow-capped mountains, a border of tiered ridges, the blue sky and sky blue lake would have merged. Soft waves barely more than ripples, caressed my feet. I felt a oneness, a union of soul tied by a magical umbilical cord to essence.

I do not know how long I stood there soaking up the healing waters, but eventually I came to a sense of presence with the present. Curious, I turned my back to the water. A hundred or so feet away red tulips carpeted the borders of a narrow pot-holed road. 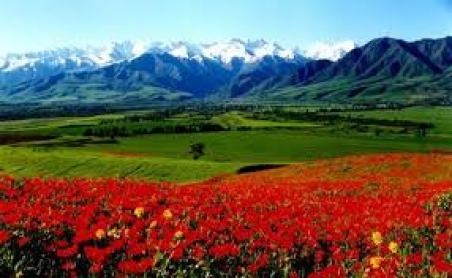 The road led through guesthouses and yurts the felt colored dwellings used for centuries by nomads, along the  shore. I had read that the village of Kyzyl-Tuu just south of where I stood, is primarily made up of yurt makers. 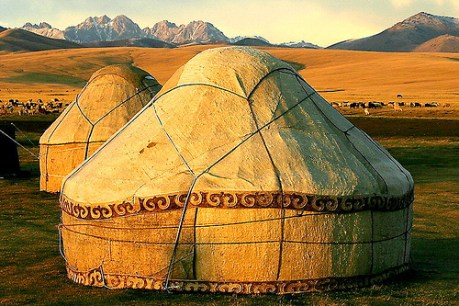 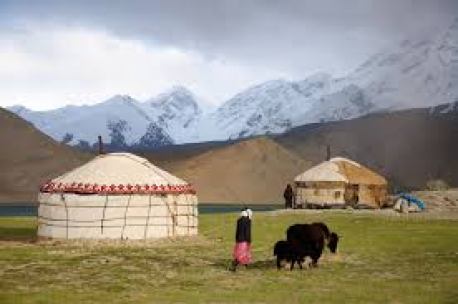 A sound of a motor plowed the waters of the lake. I turned around to see a lone fisherman pulling in. He docked nearby and disembarked carrying a large black rubber bag filled with his catch. He smiled and surprised me with a hello in English. I expected Russian as I had read it might be the main language spoken around some parts of the lake. After introducing himself, Rustam told me that as a young man he had lived in England. He shared that his son Hamid owned the nearby yurt resort; he pointed to a camp of yurts, and invited me to come by for some lunch. I had read that the people were friendly, but this was far more than I anticipated.

As we walked I told him that my time was limited, that I wanted to go to Osh the oldest city in the country. I wanted to see the silk bazaar leftover from the days of the Silk Road trade. He told me that after lunch he would be taking a few horses to a nearby village to a tour guide. He would give me a ride and from the village I could hop a minibus to Osh.

When we got to the yurt camp I followed Rustam who ushered me into his home where he introduced me to his wife. She greeted me in a language I had never heard. It turned out that Rustam is the only family member to speak English. He told me that he had been a dentish in Osh. When he retired he and his wife Mierim moved out to the yurt resort to help their son. Mierim cooked local food for the guests, but on that day they had gone on a daylong horse trek so the three of us shared the meal.

Mierim as warm and friendly as Rustam offered me a bowl-like cup of what I thought was milk. Mildly flavored it tasted somewhat sour with a bit of tang, I assumed from alcohol. Rustam noticed my quizzical look. He explained that kumis a fermented form of mare’s milk is the national drink like beer or wine in other countries. “It is very important,” he added. “Bishkek the capital of our country is named for the paddle that is used to churn the mare’s milk much like in making butter.” The drink went down all too quickly and I knew I could handle it if it were offered again.

Our lunch was sumptuous. Mierim placed a cast iron pot of plov (chicken, carrots and rice) on the table, a plate of horse sausages, flat noodles and a naan-like bread with which we scooped up our food. I had heard that vegetarians can have a hard go of it in Central Asia, but under the circumstances the meal was a gift and I figured it best not to offend my hosts. The horse sausage reminded me of a gourmet tempeh, but more meaty.

After the meal, as Rustam prepared the animals, his wife refilled my cup. We tried to talk a bit, I was picking up on a few of her words and she knew a little English, but as I have found with many women around the world, when we don’t know one another’s language, we fall into heart talk. Before I left she went into her bedroom and returned with a small Russian orthodox cross and put it in my hand. We hugged. I had tears in my eyes as we parted.

I walked away waving to Merium. Rustam stood near the door holding the reins to two camels, I had expected horses.