From the window of the apartment in which I am staying I see rose ribbons streaming across the early morning sky portending another sunny day in the city of angels. Yesterday from the same window I watched flocks of wild, lime green parrots hopping from one  tree to another while jet-black crows toned throaty mantras. Forested yards and tall mansions block my view of the San Gabriel’s, but I sense their presence

A friend called and asked if LA was really my favorite city? 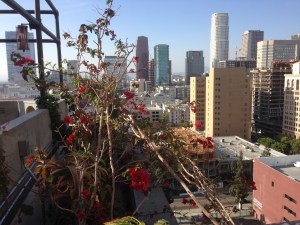 Reflecting on the same question I realized that it is not La La Land or Tinsel Town that command my attention. It is the nature of the land as in the morning scene outside the window that draws me.

I grew up in Southern California; its geographical forms, flora and fauna created the trail markers of my childhood. Forever etched in my consciousness:  the color of the sun light as it climbs up the gentle slopes of the coastal ranges, the luminescent images created by its descent behind Catalina Island, the crunch of sand massaging my feet when I pad along sea weed littered beaches, trellised bougainvillea and honey suckled fences and one of my favorites, the palm tree. Not  the tall fan from Mexico or Canary Island date, but the indigenous California fan that can be found through out the landscape. Both are such a metaphor not only for me personally, but for so much of the history and ecological development of SoCal. 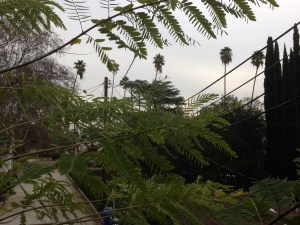 In 1952 Simon Weil commented that human beings cannot get enough of place. “To be rooted is the most important and least understood need of the human soul.”  Having a sense of the three dimensional world and signposts has even less place in our virtual worlds than in Weil’s time. How I have a sense of rootedness every time I visit Southern California.

A faithful reader requested my favorite sites, specifically tourist sites. That’s a hard one. The city of LA alone is 469 square miles, the Metropolitan area approximately 4,000. Plus, I never think of myself as a tourist so much as a sojourner.  I put on my virtual thinking cap and tried to slide into imagination, instead I went down memory lane.

I haven’t been to Universal Studios a go-to for out-of-towners, in years. The first time in 1965 was as the guest of the Public Relations Director. I was teaching a third grade in a school in Fullerton, a city in Orange County. The same Director’s children attended the school and as a gift to the faculty he invited us for a personal tour and lunch in the actor’s commissary. Our visit antedated the time when sets were specifically set up for tourists.

As we shuttled around Robert Goulet spotted us Although he did not have as much critical acclaim that he would have later especially after Beetlejuice, I recognized him. He walked over to us, we must have looked like a flock of penguins, and introduced himself. He told me he had a relative who was a nun, I believe it was his sister, and had to talk with us. We had a short, but great visit.

Moving to the next set Jerry Lewis approached us. During the course of an extended conversation he told us that he was Jewish, his wife Catholic. As such, he raised the first child, a son in the Judaic tradition; the second child, his wife raised Catholic. Such an amenable solution to mixed marriages as they were called back in the day.

The other famous person we met that day was Mia Farrow. This was prior to her marriage to Woody Allen. She was riding along one of the alleys in a jeep with her director. They stopped to greet us. After all a flock of penguins in the studios was a highly unusual site.

I engineered a second and last trip to Universal for my son in the early eighties. A bus tour took us through sets from famous flicks; hanging out and having lunch in the actor’s commissary a thing of the past.

In the present, downtown is not to be missed. Five years ago it was a repellant trash site. Now, it is one of the hottest renovation projects in California. Old buildings are being restored not torn down. Museums, markets, and quality restaurants have become magnets for Angelino’s, let alone tourists.

I had two visitors, one from New Zealand, one from Japan that I took to the new LA Chapter restaurant in the newly renovated Ace Hotel on Broadway between 8th and 9th for Sunday brunch. The food proved to be a winner!

I recommend the following for a short history, particularly for film buffs:

It is mid February, the temperature in LA has been in the high seventies; on the east coast low dips, ice, snow and freezing temps. It’s no wonder that there are nearly 40,000,000 people in the state. In the OC city of Irvine alone 40,000 new living units are under construction to meet the continuing growth.

I thought that the III post on the Pueblo of the Queen would be sufficient. I was wrong. Another will follow.