By taking a look at the role of context and place in personal history I had grown to understand my feelings of deep connection to Southern California. Initially, I tried to analyze them and got “entangled” in my own mind, but as I let go into the sights, smells and physical experiences a shift occurred. I felt connected and it was ok. On one of my visits to the Yucatan a Mayan elder told me that if we do not know our root we do not know ourselves. With this view in mind I decided to take the process of understanding my connection a bit further by paying a visit to some of the sites where I grew up.

My first stop was the former home of my grandparents in Costa Mesa. Originally, called Goat Hill the town is situated on a mesa overlooking the Pacific mid-way along the OC coastline.  The small home had been built in the mid forties by my uncle after he convinced his parents to abandon their home in Pennsylvania for the more temperate climate of SoCal. I had visited the same site several times through old family photographs, but this time I would revisit it in the real world.

When I arrived to my surprise no changes or renovations had been made to the house. It looked the same as it did the first time I saw it after a three and a half day train ride from Pittsburgh. The trees and bushes had grown, otherwise everything looked as I remembered.  A simple white stucco house, the only thing that gave it any character was the arch over the front porch now hidden by a cypress. 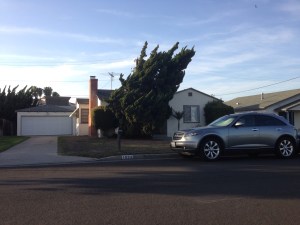 Sitting in the car, grateful to be alone I took a silent, mental walk through and around the house. Grandma bathed in flour up to her elbows baking her weekly allotment of bread, Grandpa sitting in his rocker pipe in hand, reciting Irish yarns were first among the long forgotten images that began to emerge. I remembered the taste of All-Bran because Grandma ate it every morning for breakfast as I would when I visited. I saw my mother and her brothers sitting in front of the fireplace on winter evenings holding political arguments about the decisions of the current president.

I wondered around to the backyard where Grandpa built a chicken coop. I saw him catching chickens gory details aside, for Christmas dinners. I saw the lone citrus tree next to the chicken coop that provided us with orange juice all winter. Looking down the road I saw the neighbor who always wore levis and a straw hat. He paid me to gather duck eggs along the small duck pond when he was away. I looked in the other direction and remembered the local ranch market where we bought groceries.

The telescopic, thought-full scenes and images tweaked from ancient memories comforted me. From now to long past, they seemed grounded in the physical locus before me.

As I sat there an interesting thing began to happen. Memories of images sparked by the site of the old homestead, coalesced. I felt a part of a life that at one time had been real no longer existed except as feelings inside me. With that, the simple house seemed to move far away. Not literally, but inside me. The interior of the house as I had been picturing it, including the arrangement of furniture no longer existed. Strangers to whom I had no connection lived there. What I noted when I first approached the house was their large SUV parked in front. Coming full circle, the SUV once again took hold of my attention.

What I had envisioned became  in the course of an instant a simulation. I floundered a bit. Where was I? Here and now, present to the present I told myself, with simulations flipping through my consciousness like a Rolodex. The memories had been comforting, but the telescopic view from now to past while grounded in the physical had turned virtual. Had what I had seen really happened? Of course, but now through the lens of distance, it felt like a simulation.

I became curious, really curious about virtual reality. What is it and does it have any relevance for me? I turned on my Prius motor and drove away from the home that held so many precious memories and headed straight for one of my favorite writing venues. Portola Coffee Lab is also in Costa Mesa. Once there, “entangled in the mind,” I opened my Mac and began to search through web pages for definitions of virtual reality.