So I am in Los Angeles  sitting in Café Om, one of the great writing cafes in LA. The sign on the deep orange-salmon wall just off my right shoulder reads, “You’re at OM. No cellphone. Only OMMM.” Music plays in the background, a slow, sensuous contemporary ballad sung by a chanteuse who voice reminds me of the sounds that came out of the French bistros back in the forties. She sings of her love carefully stretching out syllables until they roll into a series of overtones reminiscent of the Tuva singers from Southern Mongolia. Café Om is painted appropriately in the colors of a temple in India or the robes of a sadhu. A few locals are enjoying conversation over an espresso or cup of rooibos. I find it interesting that they sit on the same red stools that pepper the street cafes I saw in Hanoi, but in this case, tall bar stools, not foot stools. A few people are writing one young woman does embroidery. 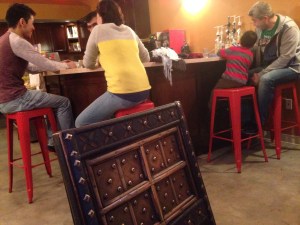 A Buddha’s contemplative head holds quiet space next to a magazine rack. 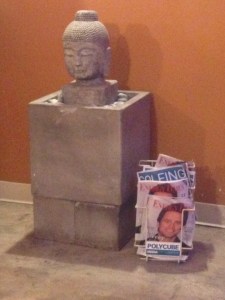 This is my kind of place.

I like Intelligentsia or Stumptown or if in San Francisco, Blue Bottle or Four Barrel where the coffees are rich and berried with long tones, the baristas accommodating, but this is an old fashion, hard core venue that resonates with the kind of vibes that speak to a writer’s heart. LA claims several such cafes. I would be remiss not to mention that Intelligentsia in Silver Lake matches the writer vibes as well.

Ten years ago while working on a screenplay with an actress friend, we would frequent Urth Cafe on Melrose the place for food, coffee and star gazing. It continues to be such to this day.  Or, we would go to V-Café down the street. Writers galore working on plays, short stories, first novels wrote in wire, spiral-bound, unlined notebooks; today, it’s all computers. Thank goodness for Wi-Fi.

Café Om is but a few blocks from St. Victor’s Church on Holloway Drive. Victor’s holds a special place in my memory bank. In ‘67 I taught a fourth-fifth combination at St. Victor’s School in a classroom on the third floor . A hi-rise Play Boy Club near Sunset Strip neighbored the school. Every time I looked through the windows I was reminded of bunnies.

Through all my years of teaching elementary and junior high, that fourth-fifth combination turned out to be one of the most intelligent classes I encountered.  Many of my pupils were movie stars or children of movie stars. Irene Dunn visited me once a week to confer on her grandchild. I held court with Zorro, yes the original Guy Williams over his daughter’s progress. The son of Mayor Sam Yorty’s dentist occupied a desk. I will not forget the brilliant son of one of the stars of Seven Brides for Seven Brothers. With my double teaching load there were times when I had little time to prepare science class. When that happened I would call on I will call him Brent. He would provide spontaneous, off the cuff talks minutely illustrated on the overhead projector on topics such as the asexual reproduction of plants.

During my time at St Victor’s the hippie movement in San Francisco was in full swing. Several decided to migrate  from the city by the bay to the more temperate climate of SoCal. In West Hollywood along Sunset Blvd from Doheny Dr. to La Cienega Ave. stoned hippies plastered the sidewalks. After a long day in the classroom I frequently took a walk along the same part of the strip. With reverence and respect the tenants reached out to me, shook my hand, and asked for my prayers. In a nun’s habit I must have looked as odd to them, as they with their long locks and baggy muslin clothing to me, but we reached over that divide and had lively, loving conversations.

A few years back I was asked in view of my worldwide travels to name my favorite city. Back in the day I would have answered Barcelona, but as I had not been there for some time I hit the mental delete button. “Los Angeles,” I replied. Oops, did I really say that. The surprise on the face of the questioner was only surpassed by my own. “You’ve got to be kidding,” was all he could say.

I have been observing, intermittently living in and visiting LA for more than half a century. I have watched the prolific development of its freeways (at one point slightly after my post-teen years, I drove them at night just to let out steam), and the ever-growing population with an an ongoing expansion of hi-rises to house it. At one point I moved north and LA became a distant memory, but circumstances brought me back and continue to bring me back. Is LA truly my favorite city? Something deep in my consciousness spurred that answer and I decided to find out what it is.

First, I turned to astrology. Los Angeles as the entire state of California is a Virgo with its official birthdate listed as  September 4, 1871.  As a triple Virgo, I must resonate. But surely there is more than astrological symmetry that would cause me to claim that LA is my favorite city.

Martin Heidegger claimed that we are not just the subject of mental states and experiences, but daseins, being there and intimately bound up in the place in which we find ourselves. We are so even when we are unconscious of the signposts that pock our local space. But for me the truth of the matter is that I get caught up in whatever place I find myself and as a result claim several places as home.

Perhaps I just have a deep case of topophilia and should let it go at that.

I do not as some, think of LA as a giant megalopolis crisscrossed by its famous thoroughfares full of pumped up speeders insanely weaving in and out of rush hour traffic faster than they could pick up to-go burgers at In and Out.  Instead I see the city of angels as a series of interconnected communal villages that can be as different as Southern and Northern California. Populated with cultures from around the world a drive through offers eye-popping opportunities to gain a larger view of the universe. Gentrification is slowly making its way through LA’s fringes as well as the hoods, but remnants of the old sit alongside the new.

Highland Park is a case in point. In the eighties it was a Caucasian community. Then Latinos began to move in bringing taquerias and super mercados. Now shifting yet again it is a multicultural diverse community including neighborhoods that maintain their own identities.

This kind of changing of the guard has been pivotal to LA’s history since the mid nineteenth century when Governor Neve decided to found pueblos next to the presidios along El Camino Real in Alta California. It was his intention to provide support for the military in the presidios thereby taking power away from the Missions. Needless to say, the Mission fathers were not too happy with his move. In the long run the Native Americans also gained independence from the Missions and found jobs in the new pueblo that was known as The Town of the Queen of the Angels.

Edward the owner of Elsa’s Bakery, a forty year old Mexican Bakery and coffee house that has become my go-to when I am in the Park not only for writing, but for great pan dulce and café olla as well, commented to me that in the Park a ninety five year old woman who does not speak English may live next door to a movie producer. To Highland Park’s credit, redevelopment is respectful of what is already in existence.

The Turkish owner of Café Om has just warned us that the café will close in fifteen minutes. It’s time to go out into the rain and head to Gracias Madre for dinner. 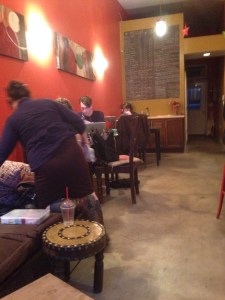