While I was so touched by the Sedilesu family and their hospitality,  the “Mother” continuing to reveal her purpose had another intention for our visit to the village of Mamoiada that had nothing to do with wine tasting. Set in the heartland of Sardegna at 700 meters and surrounded by green unspoiled, but harsh mountainous land Mamoiada is a sleepy village inhabited by families whose historical lines make centuries. Apart from wine and history it has become famous for its renowned marathones.

When I told Maria the owner of the Wine Resort where we stayed in Alghero, that we were going to Mamaoida to tour Giuseppe Sedilesu’s cantina she insisted that we also visit the mask museum. I envisioned an exhibition space where the work of Sardegna’s contemporary mask-makers would be on exhibit. I should have known better.

When we finished lunch at the cantina, Salvatore Sedilesu led us down a quiet street and dropped us off at The Museo della Maschere Mediterranee. This was neither ordinary museum nor an exhibition space for contemporary art as I had anticipated. As I ambled through the small collection of masks and costumes I thought of what the Balinese have said forever, “art and life are not separate.” As a matter of fact there is no word for art in Balinese.  The masks and costumes in the museum an expressive art developing out of human need represent of one of the oldest continuing rituals in Europe, dating back some 2,000 years. The ritual, now mask festival continues to be celebrated annually and attended by up to 10,000 revelers. 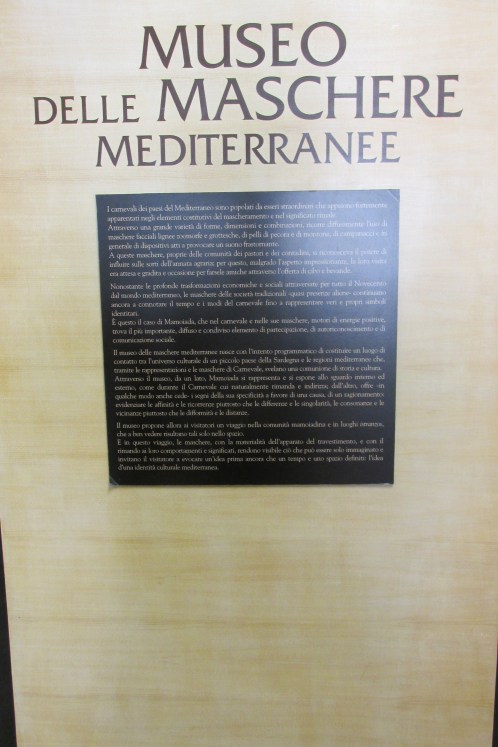 A woman met us at the door of the museum,  the only person we saw until we left. Beginning with a video of the festival as it is now celebrated she guided us through the small, but important exhibit. The guided tour enabled me to piece together a few facts.

I must say that today’s attendees witness a celebration, a long cry from the original. In an earlier time there were Christian attempts to offset and shut down that which was viewed as pagan. The tradition, rooted in pre-Christian practices and beliefs was baptized so to speak.

I have heard it said that the original marked the end of winter, sought to intervene with natural forces for a good climate for the harvest—that eternal issue: climate control. With ritual, incantations and objects empowered with signification the ancient ones hoped to accomplish their goal.

Today, in mid-January a celebration is held in honor of St. Anthony who is said, to have stolen fire from hell to give it to mankind. Bonfires are lit across the village in commemoration of his gift (I was quite surprised to hear of Anthony acting in the role of a Prometheus). At this time the mamuthones, ominous and rather creepy looking characters wearing traditional carved black masks, shaggy dark sheepskins and sets of bronze bells that can weigh up to sixty pounds make an appearance. Not a role for the timid!

They appear again on Shrove Tuesday the day of Carnival. Led on a leash by the issokadores twelve mamuthones representing the twelve months, process through the streets. The issokadores dressed in antique gendarmes uniforms are perhaps a leftover from the Spanish control of Sardegna. Like All Hallows Eve this is a night when work is done to ward off the demons. 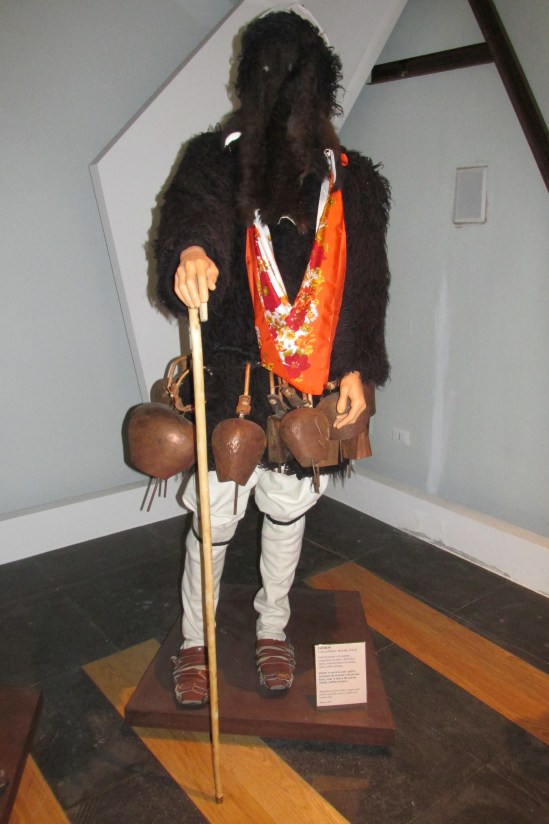 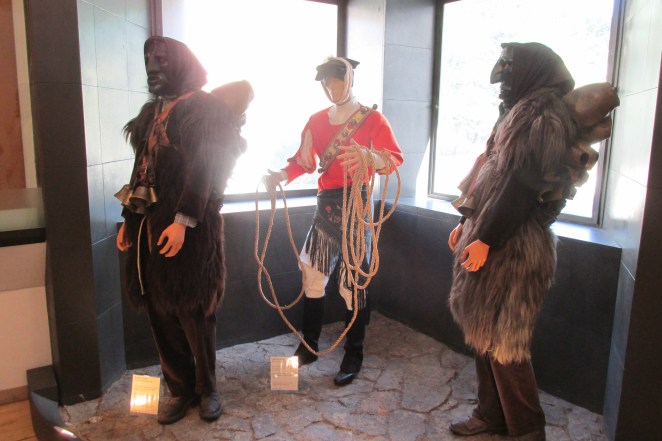 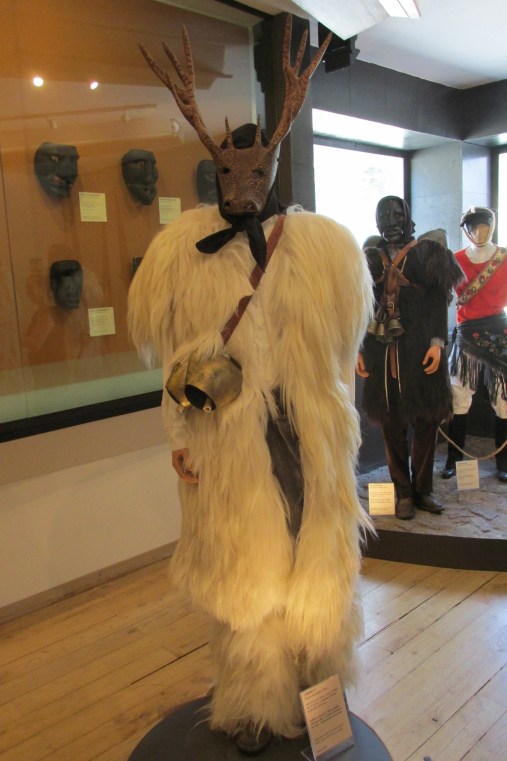 A local crafstman preparing sheep clothing for the ritual. 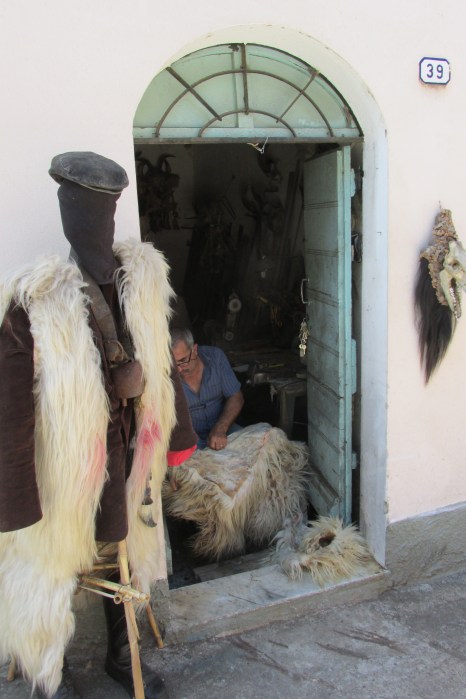 I was told that up to another two hundred mamuthones could parade. I am reminded me of some of the shamanic traditions of the Tibetans and Native Americans.

The museum exhibit included masks and ritual clothing from other ancient cultures around Europe including Greece and Scandanavia. I found none of them intimidating, nor did I feel the kind of energy that such works can evoke. Some were merely spooky objects of curiosity. To get the full point of the masks and sheep’s clothing I believe it is necessary to participate in the experience. 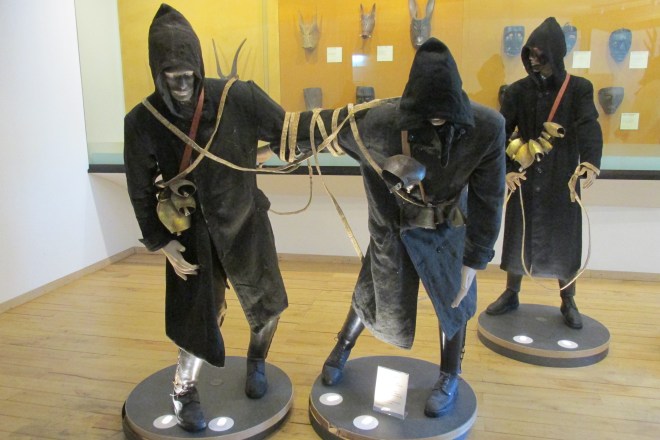 I do not think I will be returning to Mamoida, but I am grateful to have been guided to the mamuthones. I touched into a primal line of human action that connects with much of what I have experienced in contemporary drumming and shamanic circles, and if for nothing else it served as a reminder of a world beyond cell phones and I-pads. 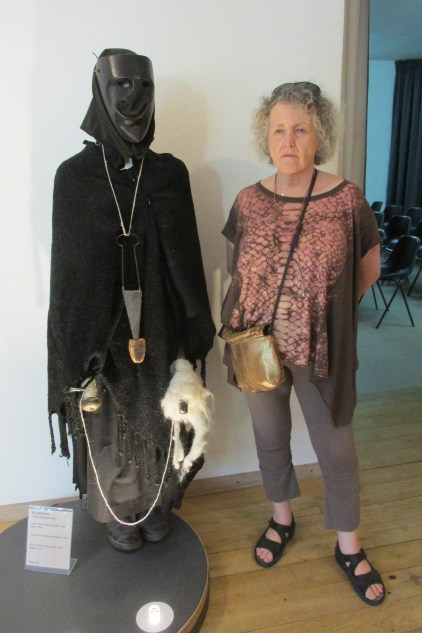