We arrived to a hot, muggy Rome with ninety five percent humidity. Hardly off the train, a woman approached us with an offer of a room for the night. Rather than pursuing the recommendations in Europe on Five Dollars a Day and hoping to save some time, we followed her. The second floor room would have been ok for a night or two, but I found the woman’s energy intimidating, something about it not ok. We politely rejected her offer, made our way back to the hectic area around the train station, stored our backpacks in a locker and caught a bus to the Vatican. When I felt satisfied we returned to the station grabbed the backpacks and hopped on an overnight to Barcelona.

Forty years ago turned off by noise, pollution, the strange woman, I left and did not return to Rome until 2010. That’s when I fell in love.

On the current trip we ubered in from the airport with a polished limo driver, Emilio. He spoke to us in the fluent English he learned as a child when he lived in Montreal. Later his father brought the family back to Rome. He explained that Uber differs in Italy from other countries in that only black limos are available, driven by professional drivers. Emilio gave us a smooth as silk ride to our hotel in Trastevere.

Arriving at 9:30 AM with one day in Rome and, in order to recuperate from a twenty four hour trip on which I had no sleep, we limited our schedule to a few short walks, two sites, and a Michelin *ed dinner.

The first, our hotel the Donna Camilla Savelli, is a convent built in the seventeenth century. I use is because it is still part convent. 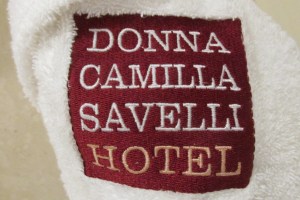 Raining when we arrived. 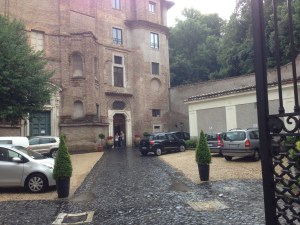 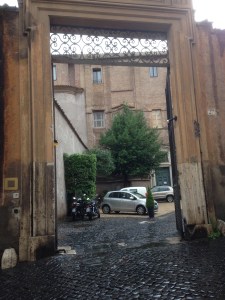 Former convents turned into hotels are warm, and resonant with the energy of the sacred rituals that were performed daily  for centuries. Spacious, originally built with a spiritual purpose in mind they are a far cry from the chains that river across America. From Spain, Puerto Rico, Oxaca and now to Rome, I cannot imagine why my karma continues to take me for sleep-overs in these hallowed sites. 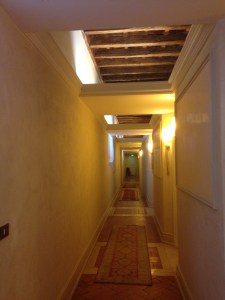 The Camilla, designed by Francesco Borromini the famous seventeenth century architect is currently considered one of the art sites of Trastevere, the old part of Rome that lies at the foot of Gianicolo Hill. Camilla Savelli a noblewoman commissioned Borromini in 1642 to build the convent of “Santa Maria dei Sette Dolori” as well as an adjoining church. Today the hotel carries her name.

Those who renovated the convent adhered to the laws of the Baroque style as well as Borromini’s intentions. It is a hotel, but retains the original style and space of the former and present convent. The nuns who turned the convent over to the architects retained part of the original place for their current living quarters. Just off the lobby is the old chapel where mass is celebrated daily. 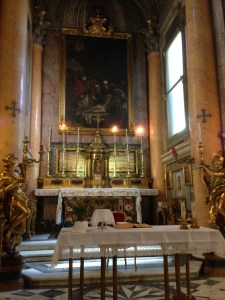 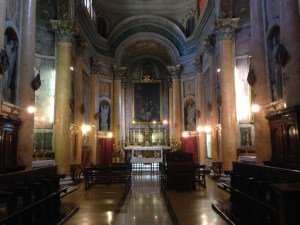 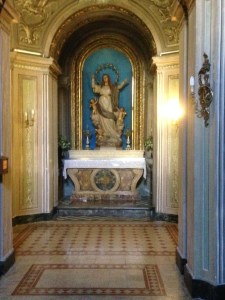 We stayed at the hotel the last night of a two-week visit to Rome in 2010. The quiet by day, the bustling café scene by night of the area appealed to us; we knew it would be a great place to recover from jet lag.

While there we ventured out for a short walk about mid-day, but when the monsoon came in a few hours later we headed back to the hotel and rested up until dinner.

In May we made a reservation at All’Oro a one star Michelin housed in the The First Luxury Art Hotel our second planned site. The first? Sounds a bit dubious. But, it is true. When I think of the art hotels I have visited over the years, this one takes the cake. No hippie-doo, no cheesy rooms in a vagrant run-down area, just pure luxury and high, fine art- literally a visual feast for the eyes. At a standard 500 euros a night, could it be less?

Like the Camilla the Art Hotel is also in a historic area. Near the Piazza del Popolo, the Spanish Steps, Via del Courso, Via del Babuino, and inside a historic building but totally renovated with natural materials and with the original façade was left intact.

We arrived early enough to give ourselves time to view the more than 200 pieces of contemporary art, much of it on the ground floor lobby, bar and restaurant. 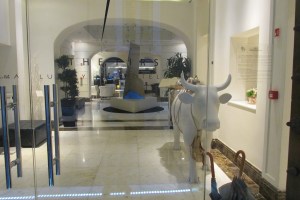 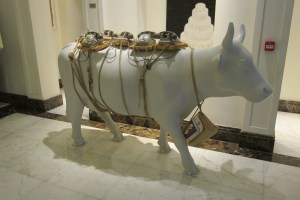 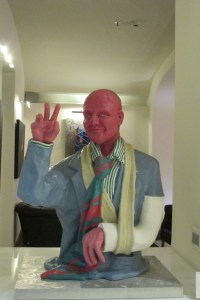 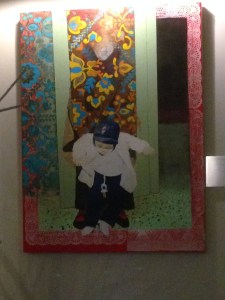 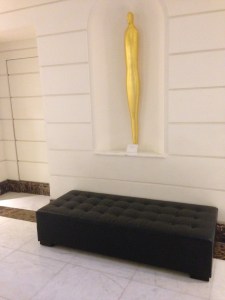 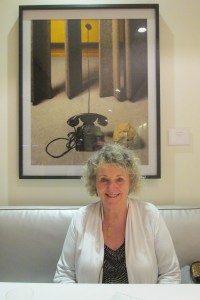 We lamented that our great lunch at a tratoria near the hotel including melt-in-your-mouth squid, tomatoes. and onions highlighted with green peas and my partner’s rabbit in rosemary brushed with a light olive oil, and a fresh chicory, did not allow much internal space for dinner. With our planned, brisk walk interrupted by intense rain-pour, we debated about canceling, but oh my goodness, thank the Lord we did not.

After intense research I had chosen All’Oro not because of its good reviews, but rather so we could sample the innovative work of the chef. From the readings I gathered that Riccardo di Giacinto is a bit like some of my favorites chefs in California: Carlos Salgado-Taco Maria in the OC, Joseph Centano-Bar Ama and Orsa and Winston in LA, Matthew Accerollo-SPQR in SF among them. These young, humble chefs are cooking in the style often learned from the mothers and grandmothers, doing a fusion of traditional flavors with new. At the heart of their work is heart and their own creative inspiration.

As it is written, di Giacinto is “known for his unique talent to revive the authentic flavor and reintroducing it with dazzling master into the modern plate.”

I ordered two dishes. The first, Reduction of carbonara. The photo says it all. An eggshell filled (approx.. 2T) with a combination of the flavors of pasta carbonara: pecorina, parmesana, egg yolk and surely somewhere in there a dollop of bacon fat? This almost vegan could not resist! It was all I needed to make my dinner complete. 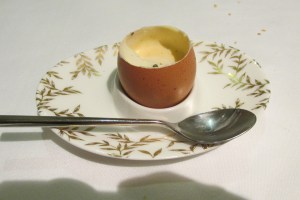 Followed up with cod tempura shaped like three pears in a tub. We rejected a final plate of delicate sweets but delivered to our table none-the-less, perhaps by mistake. 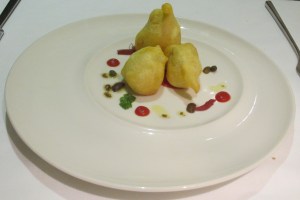 Tired and happy we ubered back to Camilla with Pietro.