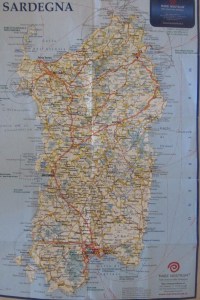 I have missed you my dear friend. Yes, I am referring to you dearest writing. I felt you pulling on my mind and heart, but it was just impossible to be with you. The last several days have been so long and full. The mid-morning breakfast followed by the day’s activities, not to mention the late night feasts that often went on to midnight. By then, no energy left, let alone time for you. Most days I have been caught up in establishing deeper relationships with cannonau, vermintino, carignano, turriga, monica, nauraghi some of the well-known nectars with which the goddess has endowed the beautiful island of Sardegna.

And Sardegna. How was I to know? Her energy so deep and intense. Twirling from her center like a dancing Sufi rotating in slow motion she embraces her children as she spins. Sedona has nothing over Sardegna.  Drums beat from the vortexes, the ancient ones call from the base of the nuraghi, Neptune pleads from his Grotto, the hyla sarda resound with the song of the night and the sacrificial lamb gives its bleat by day.  Century after century the rituals repeat themselves.

I had no idea why Gaia was calling me to Sardegna, but with all good intentions I planned the trip knowing that purpose would eventually reveal itself.  It would be similar so I thought to following the grape in Napa Valley, Walla Walla, or Willamette. After all, wine regions here or there have so much in common.

I concur with DH Lawrence, “Sardegna is different.” I have already noted how quiet and tranquil she is; add to that simplicity and complexity. Layered in the history of so many civilizations stretching back thousands of years to the Ozieri culture whose rock tombs stand yet today followed by the nuraghi, who left seven thousand nuraghe in their trail. So mysterious these Bronze Age towers and settlements that came before the dawn of history, what was their purpose? I like to think for ritual and community gathering, but then how would I know this unless I had been there? Later the Phoenicians arrived followed by the Carthaginians, the Romans who were responsible for roads and cities. After the fall, the Vandals, the Genoese, and the Catalans left their imprint. Remains of the old reverberate today in the parades and festivals especially of the interior villages with each revealing its own unique culture and tradition. With so many layers I am unable to get to the bottom of it all. She is unfathomable. 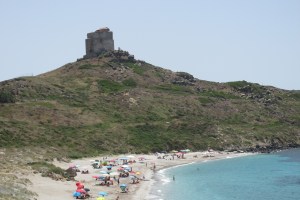 A nuraghe overlooks one of her many stunning beaches

Sardo is the language here. I have heard that it is the closest spoken language to Latin. Many villages, even side by sides have their own dialect. The Sardinians make it clear that they are not Italian. They are Sardo! I made the mistake of calling one an Italian only once. Some Sardo’s feel this with such intensity that they have started a separatist movement known as the Swiss movement. They want to leave Italy and unite with Switzerland. I’ve heard some of the Swiss seem to be happy with this; they would have access to the beaches and lagoons, the Sardos with an enlarged bank account.

The wine culture is very different from the rest of Italy. It goes back thousands of years beginning with the Nuraghi. It developed separately from the rest of Europe including Italy. Even though the Catalans occupied Sardinia until the eighteenth century even that did not impact winemaking so much especially in the south.

Tim, Trevor, Jeremiah, Eduardo, Ceri, Clare, Jeanne, Sandra, Shachi, Maneesh, Adam and any I have missed that have helped to steward the industry, I have so much to share with you about Sardegna’s new developments in winemaking.

This afternoon we lifted off the island from Caglieri on Ryan Air and flew to Bari the capitol of Puglia near the heel of the boot. Tim had Luigi pick us up at the airport. He drove us to Matera where Tim and Chris were waiting. With a few days of lollygagging in the stone village at our disposal, hopefully there will be time you my dear friend. Together we will share the experiences on Sardegna. 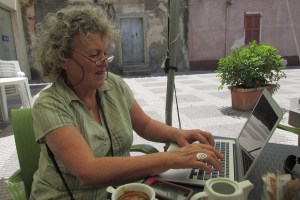