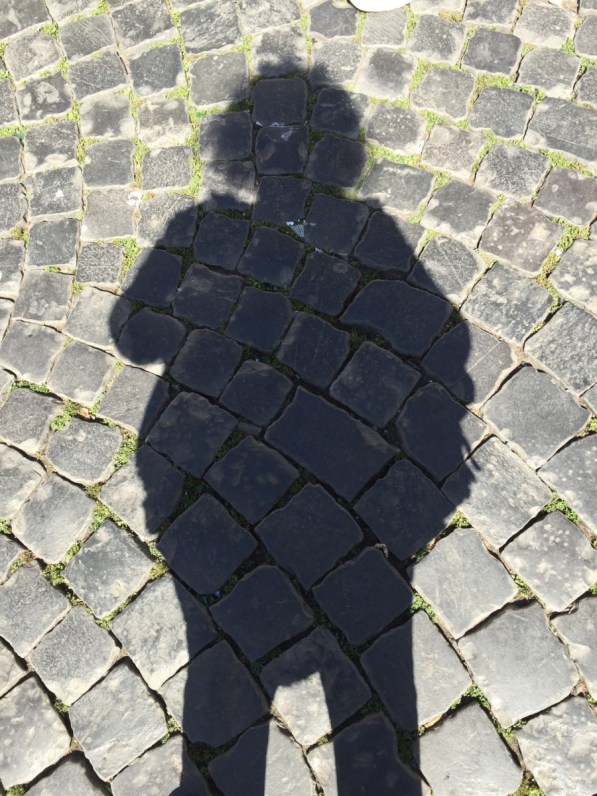 Thank you to all of you who signed up for the Word Press emails!

For the past two weeks, I have been spending a lot of time reflecting on the experiences I had in Rome. I wanted to write more about them, but every time I sat at my computer to do so my mind would float off into the ethers where an image of Francis would emerge. Meeting such a being left not just a lasting impression, but a lasting exclamation mark. It was a wow event and one that I continue to ponder. Rome held a special magic with which I continue to be  intoxicated, but this morning I am finally getting back to the keyboard.

After the meeting at the Vatican, I was confronted with what to do with four more days in the city. Everything paled in comparison to meeting Francis. With its plethora of common and sacred sites, I could wonder the eternal city’s cobblestone streets endlessly educating and entertaining myself. The food scene offered much to be explored as well with waves of new chefs calling to me. But coming off one the significant meeting sightseeing held no appeal. The food was necessary and I intended to sample the best, but otherwise?

My partner and I decided we would walk to our favorite coffee house in Trastevere for a cup of bitter Americano. 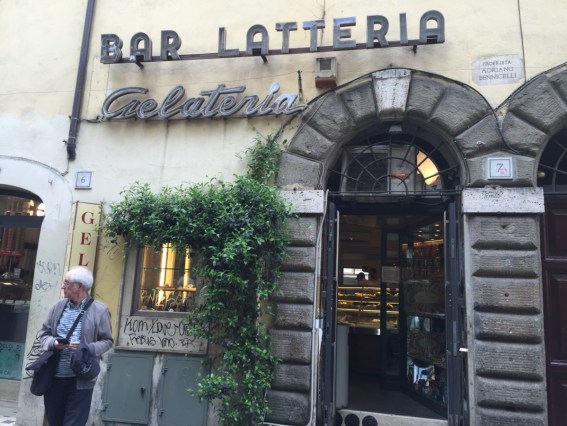 Surely given a little time, an answer to my conflicted state would present itself. And that it did when we stopped at a corner magazine kiosk. I asked the attendant if he had any tourist maps and he responded by offering me a map of a seven-basilica pilgrimage. I knew that Rome had been one of the major pilgrimage destinations of the Middle Ages; I did not know of the seven basilica pilgrimage within the city limits. Originally, organized by St. Phillip Neri who planned it to counter the loud celebration of Carnival. With the rise of Carnival celebrations, I cannot imagine anyone in the modern world doing a pilgrimage to counteract noise. My need for quiet and practice could be met in a long walking meditation. I bought the map and thanked St Phillip for his plan. 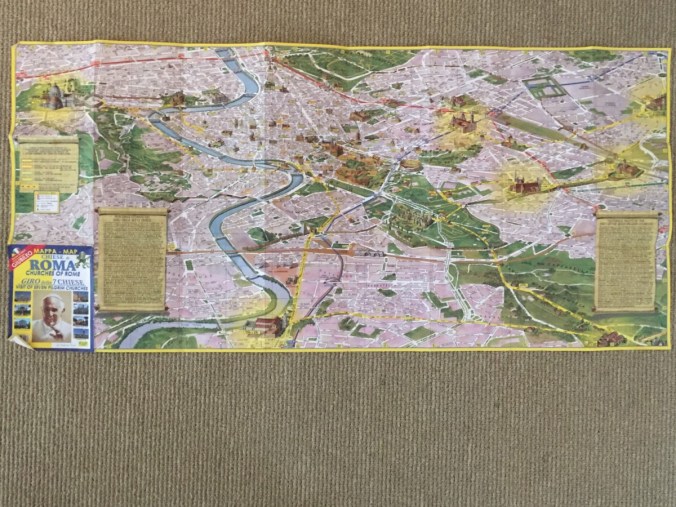 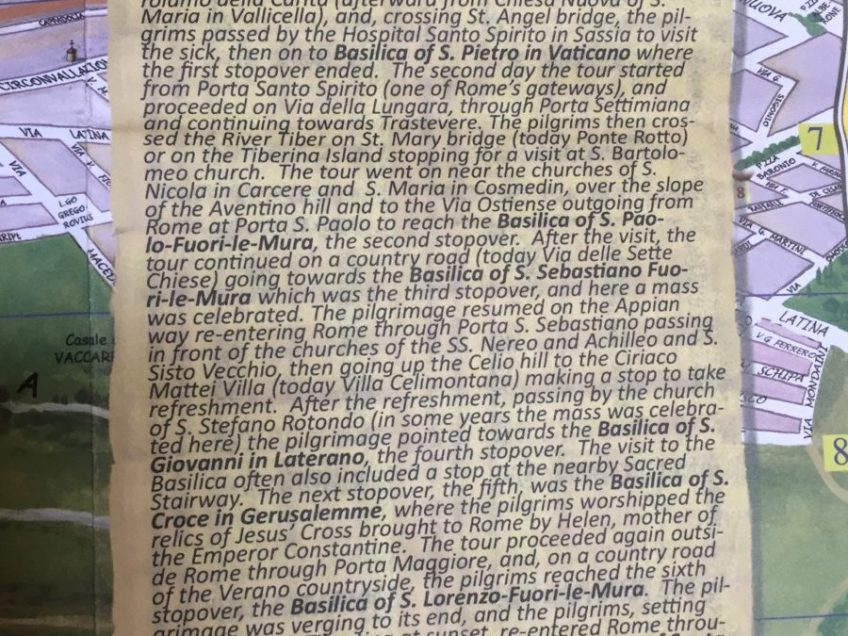 We returned to the Donna Camilla picked up a bottle of water, walking shoes and walked out onto the sunny streets of Trastevere. Shortly in crossing a bridge that took us over the Tiber we stopped to enjoy the antics of a mime. Then, onto a broad street that led to the church of St. John the Lateran the second of the seven basilicas we had in our sights. The visit to St Peter’s after our meeting with Francis had been the first of the seven. 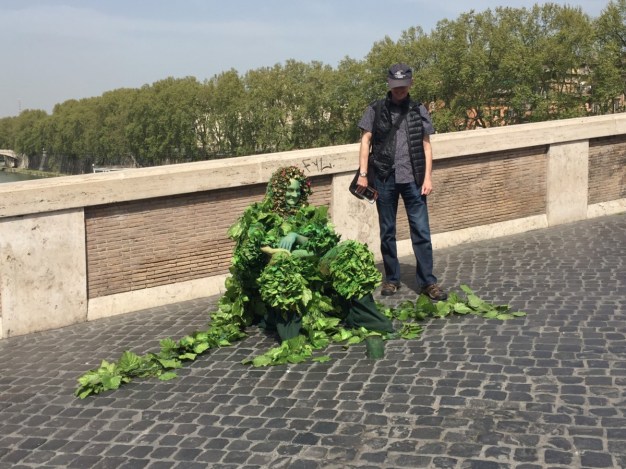 Walking along, I pulled out the rosary gifted to me by Francis. Well acquainted with beads both malas and rosaries, I knew it would help me especially with having been blessed by such a great being, to focus on the purpose of my walk. I began to recite the first decade. An Our Father, followed by ten Hail Mary’s and a Glory Be. When I got to the “Pray for us sinners now and at the hour of our death,” the word sinner became problematic as I heard the voice of a former teacher in India. “You are not sinners,” she said in reference to the belief in collective guilt suffered through original sin and assumed by Christians. To avoid an internal theological dilemma, I dropped the word sinner as I began the second decade. A simple Pray for us now felt reassuring and I sensed Mother Mary’s presence. No problems with the rest of the rosary.

I imagined that had I been on the same path at the time St. Phillip I would have found myself threading through green pastures and wooded byways. But now the wide cement sidewalk alternated between commercial and residential structures, a playground, historical ruins, a swap market and not surprisingly, a church dedicated to St. Francis. I could not resist recording some of the sites with my I-6. 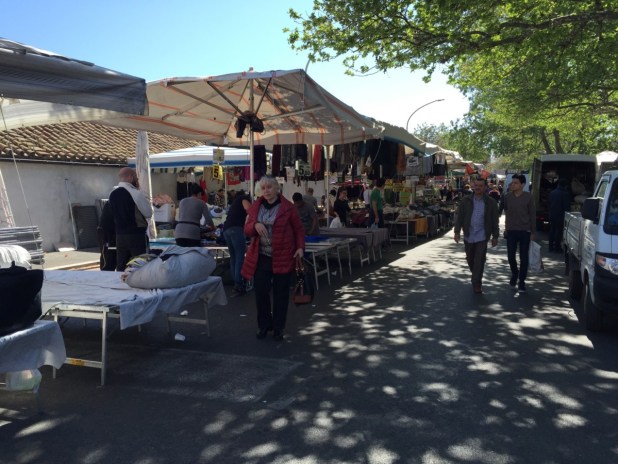 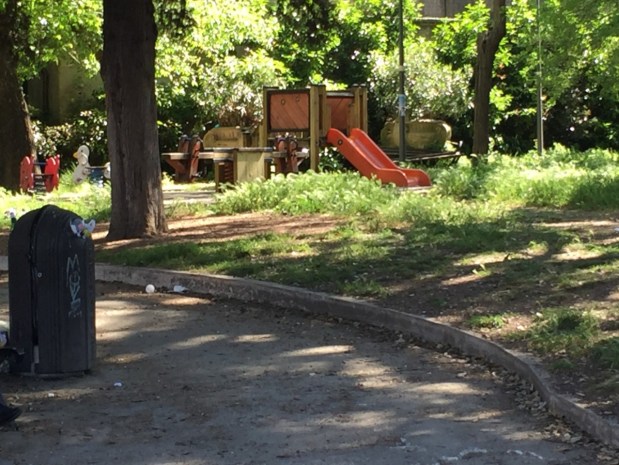 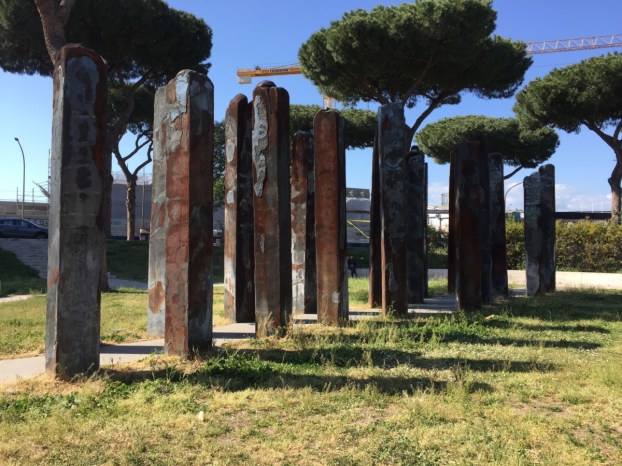 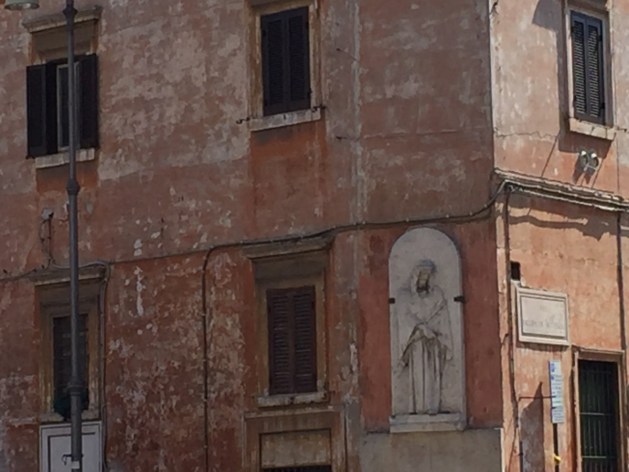 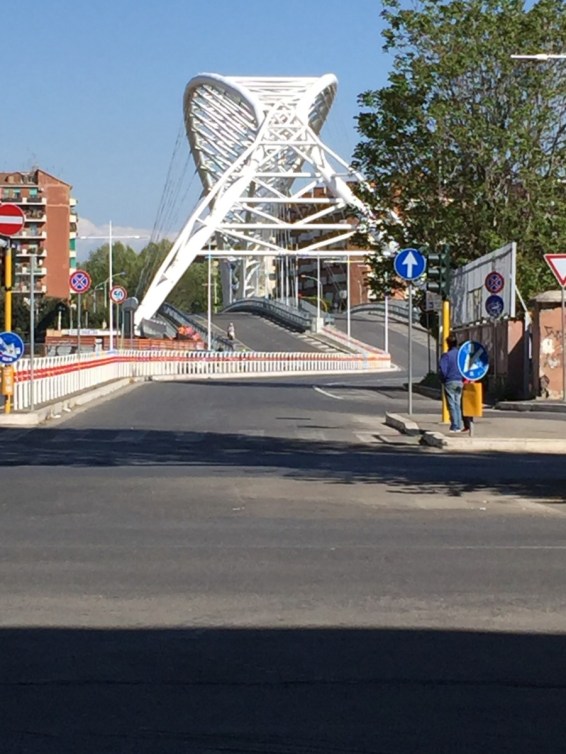 In approaching St. John’s, its tower gradually grew in size. 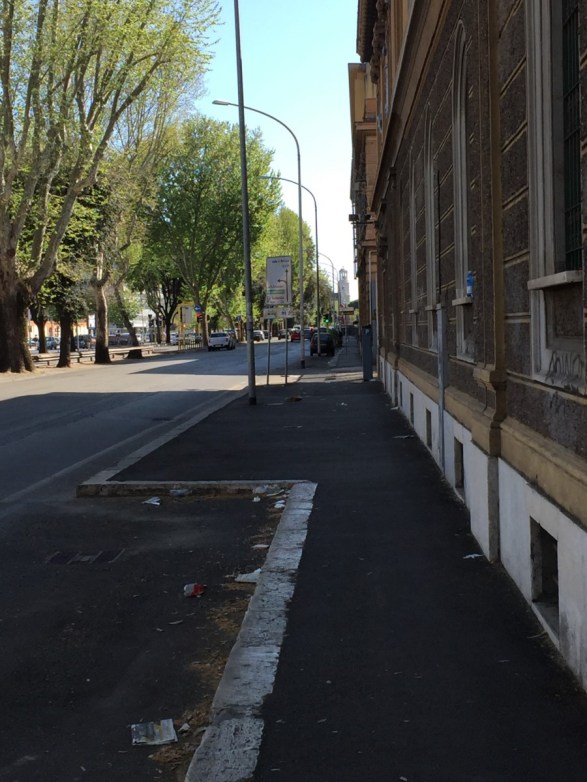 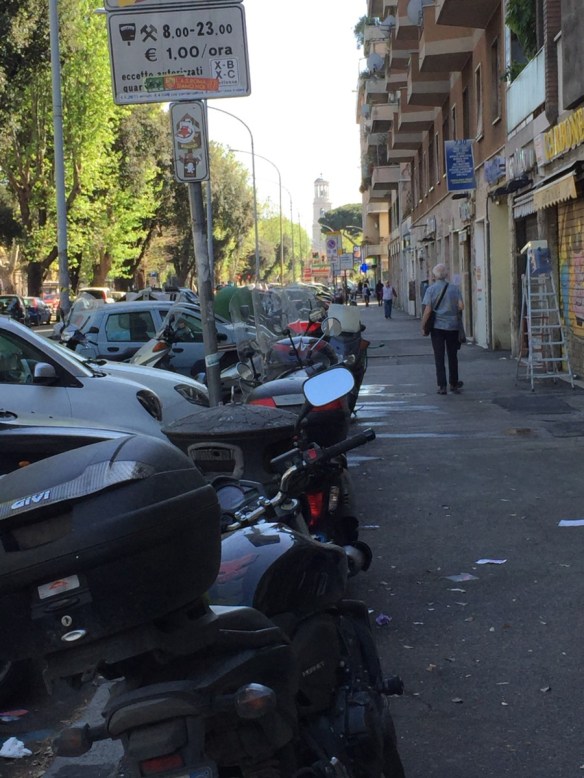 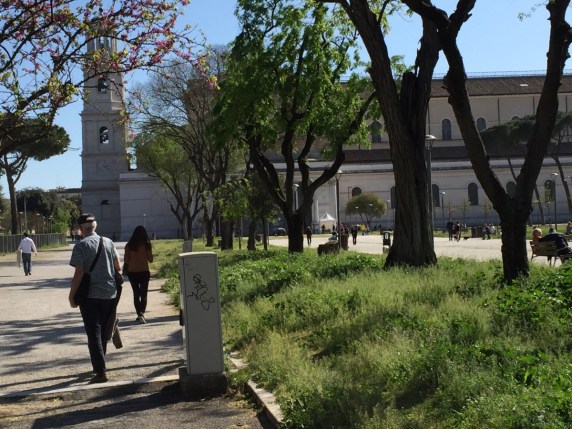 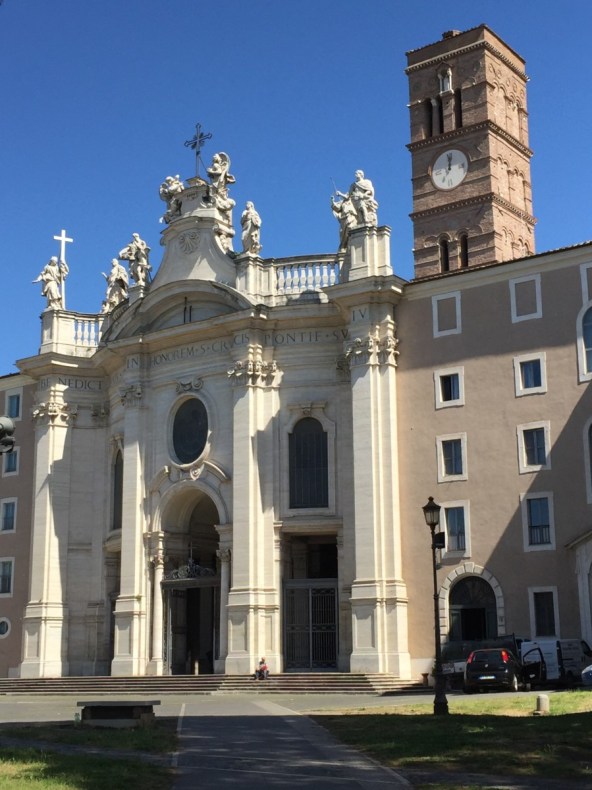 All in all, it took an hour and a half to finally reach the church. I love that moment of passing through the entrance into a church, temple, or pyramid and feeling the charge of energy emanating as a result of the repetition of sacred rituals having been performed on site for hundreds of years. I reveled, but not for long. Beyond the doors, reams of visitors and their tour guides milling about interrupted the quiet I longed for. I walked around the church, talked with some of the saints represented in statues, spent a few moments at the altar then sat for a bit of reflection. 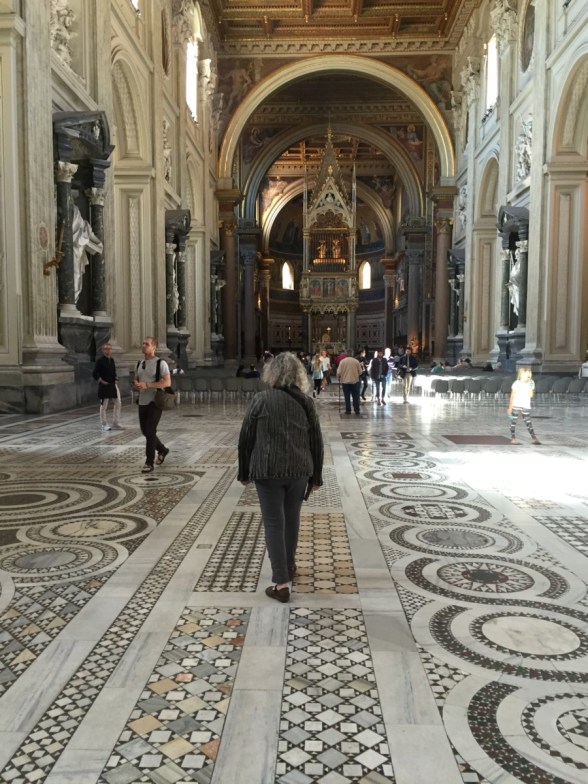 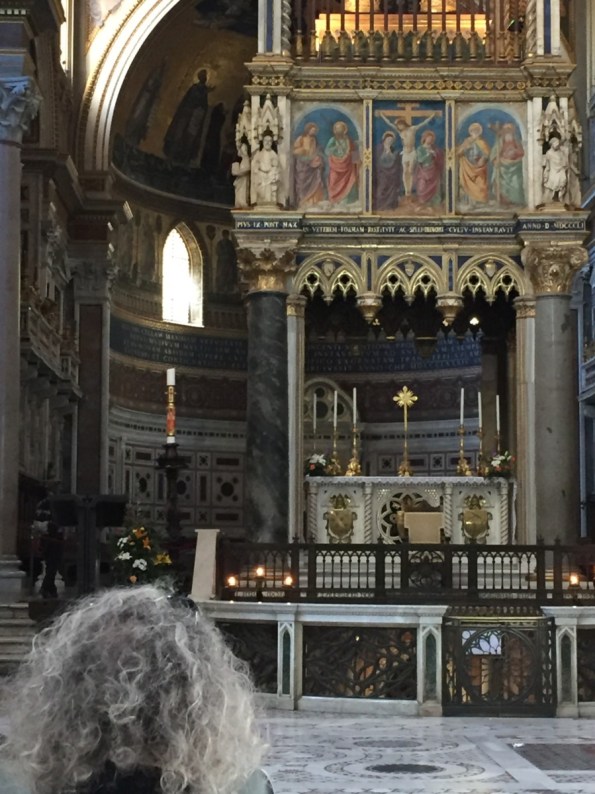 Before long I noticed long shadows growing across the marble floors. With a setting sun reminding me that  it was time to head back to the hotel, I drew my reflections to a close. Later that evening I would decide if I wanted to continue the pilgrimage the next day.