In the OC today.

I am sitting in Portola Coffee Lab peering through tall windows at a blue sky intermittent with white streaks and gray cream puffs. The rain gone, every wisp of cloud is clearing. Unbounded space. Tomorrow warmth and sunshine predicted. 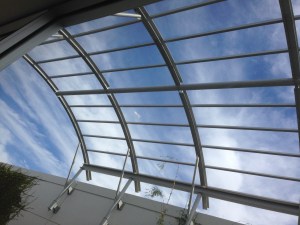 Café Om on Melrose in LA may be a writer’s destination par excellence, but Portola Coffee Lab at The OC Mix in Costa Mesa is the coffee drinkers’ destination sin qua non and a great place for writers as well. If the beverage of choice is not coffee, Seventh Tea Bar next door is an alternative. I tend to go back and forth. A personal port, I would be remiss not to share a bit about Portola.  First and foremost, coffee does not get any better.

I hear a simulated response out there.

“But Penelope, have you been to Blue Bottle in San Francisco? Four Barrel?”

“Had espresso in Italy?”

“And, Portola is the best coffee in the world, hands down!

Am I biased? Guilty as charged, but I admit, there is one other place where  coffee is almost as good.”

An aside: at Portola the baristas brew some coffees with Japanese brewing tools.

I discovered the quality of Japanese coffee a year and a half ago while in Japan for our son’s wedding. The coffee houses were wonderful, but on the day Kenjiro my daughter-in-laws father, took us fishing I experienced the extent to which quality brew had moved into Japanese culture. We met at the boat very early long before the coffee houses had opened. Next to the dock was a store, the equivalent of a 7-11. Can you imagine buying your morning cuppa Joe at a 7-11? Well, some may, but not this gourmet. When it comes to food and drink I wouldn’t want to buy anything from a 7-11. My daughter-in-law went over to the store and moments later emerged with pastries and cans, yes cans, of hot coffee. The 7-11’s in Japan have a hot box–looks like a small fridge that keeps cans of coffee, hot. I shuddered as she offered me a can. Not too hot, I could hold it in my hand unprotected. I popped the lid like a can of soda pop and gingerly took my first sip. Morning coffee from a can never tasted so good. Soon I was sailing out to sea, happily sipping a canna Joe. 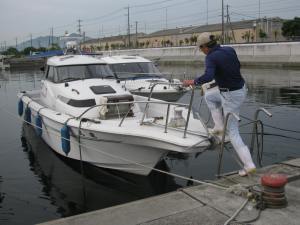 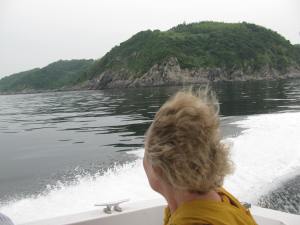 I do not mean to draw comparisons here. It was not a Portola where every cup is perfectly handcrafted according to which of the three brewing methods Trifecta, V-60 or Siphon, the customer chooses. Interesting that V-60 and Siphon are Japanese, Trifecta American made. The Kyoto method of brewing ice coffee is also used.

While pursuing a chemistry degree, Jeff Dugan the friendly outgoing owner of Portola Coffee Lab worked in the coffee business. One thing led to another until he decided to devote himself to the brew. The baristas at PCL reflect the same enthusiasm, friendliness and passion for the work, as does Jeff. His story a great read, can be read at 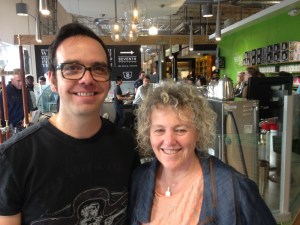 By the time the Lab was about a year old, Jeff was considered among some of the best judges as one of the top three roasters in America. I can only imagine what his future holds. The coffees he chooses can be purchased on-line.

OC Mix, the setting for Portola a unique collection of shops, no chains allowed, and foods establishments is a place where creative individuals have opened unique businesses that defy the usual models.

Around the in-door shops airy spaces furnished with tables, chairs and sofas are available for groups or individuals to gather. And gather they do, laughing and chatting with the world of front-page news another world away. Students, great grandparents, artists, tattooed hipsters, businessmen and women in dark suits and designer ties, mamas with babies in papoose, dog walking groups (sitting outside), Bible toting students coming in from classes at a nearby Church, women in traditional Muslim dress, tourists from Asia, the diverse list is endless. 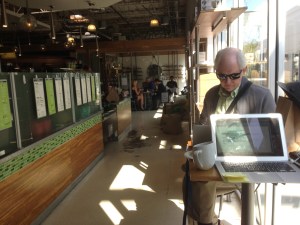 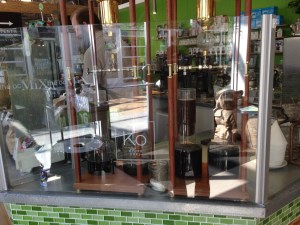 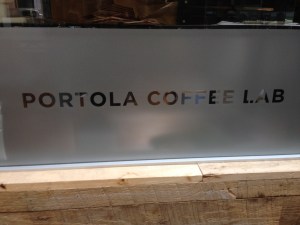 When I decide to leave my cave to join other humans for a bit of social the Mix is one of my destinations. Would that we had more places  like it in our communities. In the advanced enlightened schema of life neither tea nor coffee may be necessary, but human interaction is  and coffee or tea is a drink that brings people together. They also are the way that most of us start the day. For now, I hope to enjoy the best I can find or the best simulation my mind can conjure.