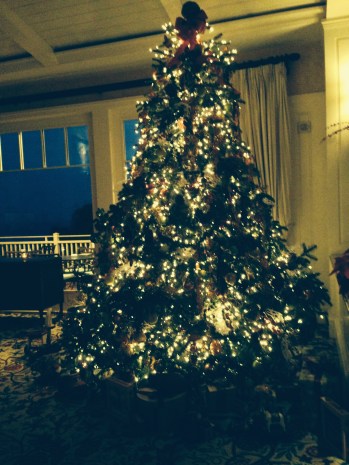 As I begin this post the rain goddess along with Father Christmas is responding to our chanting and drumming. We had four inches of rain in Davis in one day, not counting what came after dark. In forty years I have never seen so much accumulate in twenty four hours. Other areas such as up in the Sierra foothills, were blessed with eight. Lake Shasta climbed five inches. Perhaps the worst California drought in 1200 years is meeting its demise as the weatherman predicts that more rain is on its way.

I cannot remember how or when I became a devoted tree hugger. When my batteries need recharging I throw my arms around one of my favorite trees. Not only do trees energize me, they are great conduits through which I receive love from Mother Earth. Some of my best friends are trees. I find it no wonder that they have played a significant role in the lives of humans throughout history.

It’s that time of year when we focus on their importance. We beautify  them with ornaments and lights, and give them a special place in our home. 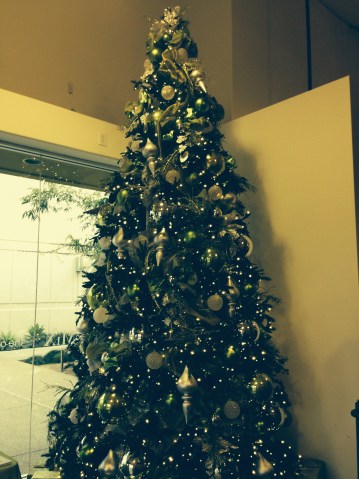 The annual ritual with the Christmas tree derives from ever so many ancient customs. Pre-dating the tree is an old belief in the magical powers of evergreens. The Druids (the educated and sometimes religious Celtic Gauls among others) for example, held that the leaves of holly were signs that the sun would never desert them. In ancient Rome greens graced the houses for the festival of Saturn, the god of agriculture as protection against evil spirits.

While the evergreen fir tree has been used in pagan and Christian rituals for over a thousand years, no one quite knows for sure when it was first used as a Christmas tree. The first documented case was in the town square of Riga the capital of Latvia in 1510. A plaque commemorates the tree in eight languages as the first New Year tree.

Miracle Plays performed outside churches in medieval times may have had a relationship to the Christmas tree. December 24 was the feast of Adam and Eve in the Church calendar. Paradise trees representing the Garden of Eden were paraded around town before the play. About the same time the production of passion plays that presented the Cross-as the tree of life spread from Germany throughout Europe. When the plays died out the tradition of the tree continued in a wider context and the Christmas tree custom, as we know it began to take shape

In the late 1800’s my grandfather immigrated from England to America. He had quite a surprise on the first Christmas he spent with his in-laws. When he went to the Western Pennsylvania farm of his new bride’s parents for the holidays he was amazed to see that a tree played such a major role in the Christmas festivities. I am told that he referred to it as “the German toy”. 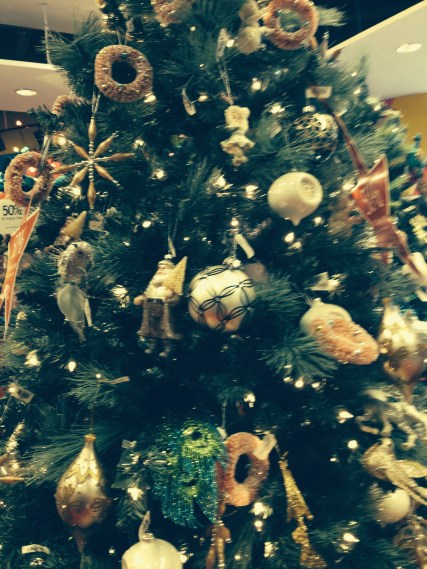 In his homeland outside of court circles, the tree did not make much of an appearance until 1922, and then mainly in the homes of German merchants residing around Manchester. Charles Dickens wrote a glowing account of a Christmas tree he had seen for a magazine article he wrote in 1850. From then on his fellow British including my grandfather referred to the tree as the “German toy.”

“I have been looking on, this evening, at a merry company of children assembled round that pretty German toy, a Christmas tree. The tree was planted in the middle of a great round table, and towered high…It was brilliantly lighted by a multitude of little tapers…sparkled and glittered with bright objects. There were rosy-cheeked dolls hiding behind green leaves…real watches (with movable hands, at least, and an endless capacity of being wound up) dangling from innumerable twigs. French polished tables…and other articles of domestic furniture (wonderfully made of tin) perched among boughs…jolly, broad-faced little men…their heads took off, and showed them to be full of sugarplums; there were fiddles…trinkets for the elder girls…baskets and pin cushions…guns and swords…witches…to tell fortunes;…tee totems, humming tops, pen wipers, smelling bottles, conversation cards, bouquet holders, real fruit made artificially dazzling with gold leaf; imitation apples, pears, walnuts crammed with surprises; in short as a pretty child delightedly whispered to another pretty child, her bosom friend, “There was everything, and more.”

“…some of the diamond eyes admiring it” Dickens continues, “set me thinking how all the trees that grow and all the things that come into existence on the earth, have their wild adornments at that well remembered time.” 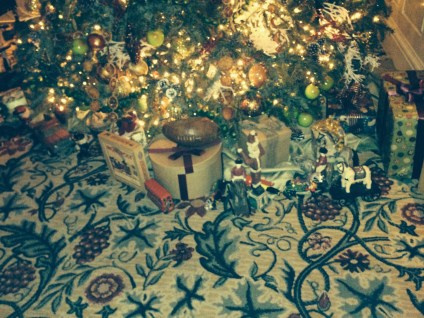 While the practice of honoring and decorating trees traverses many traditions, it is through the German immigrants to Pennsylvania that the Christmas tree custom took root in America. By the time Grandpa arrived in America the Christmas tree having made faster progress than in England was well on it’s way to becoming the very core of the Christmas celebration, not only in Pennsylvania, but throughout the country as well. By 1900 one in five American families had a Christmas tree and by 1910 nearly all children had a tree at home. Only in small, isolated towns in the South and West were trees somewhat scarce until after 1915. But even then, community-hall or church trees were common. 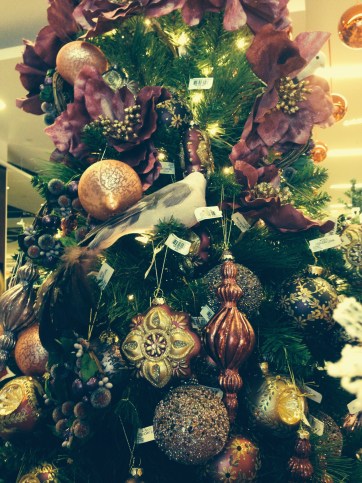 The lighting of the community Christmas trees in downtowns across the country follow a tradition first established in 1909 in Pasadena, California when a decorated a tree with outdoor lights was placed in the center of town. A community tree appeared in Madison Square Park in 1912 and in Philadelphia the next year with a tree in Independence Square. President Calvin Coolidge established the national tree-lighting ceremony in 1923.

Before my grandfather arrived on the scene my great grandparents had been quick to take on the custom of the Christmas tree from their German immigrant neighbors. Great-Grandpa staked out his tree in the late Fall while walnut-ting then chopped it down a few days before Christmas. My father who spent his childhood Christmases on the farm recounted that the tree set up in the middle of the parlor, was loaded with popcorn balls, candies, nuts and fruits-such as oranges from California, small toys and a dollar bill nestled in the boughs for each of the children.

If Dickens were observing Christmas 2014, he would note the same sparkling, diamond eyed children, young and old gathered round a tree likely set up in the great room where a vaulted ceiling can accommodate at least ten feet of height. Brilliantly lit with indoor lights, it is covered with an amazing array of ornaments from stores such as Target, and Macy’s. At its base are gifts many of which were still in the mind of the universe at the time Dickens described the German toy. Wrapped in colorful boxes we find computers, cell phones, television wrist watches, I-pads, gift certificates from Nordie’s or foodie restaurants, Legos, Coravins, and maybe a bike. 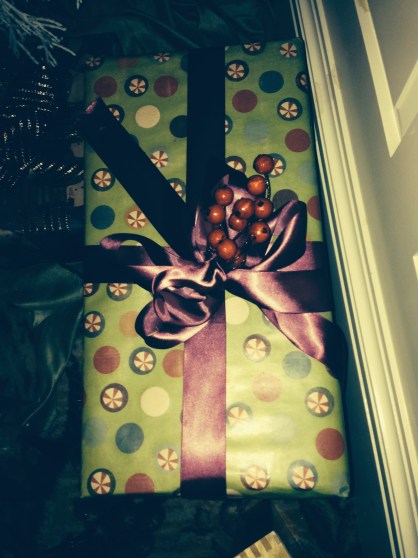 As the little rosy-cheeked child remarked in Dickens’ experience, “There will be everything and more,” around the Christmas tree. So, tis the time, to turn our attention from torture, immigration issues, money scandals, polarizing politics and with the children turn our attention to fantasy, magic, wonder, to the other side of the human condition, and celebrate the winter festival. 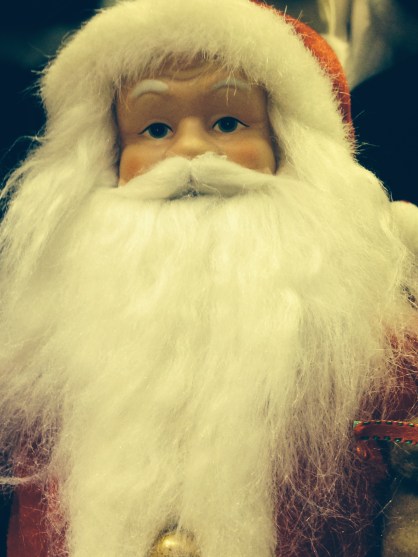 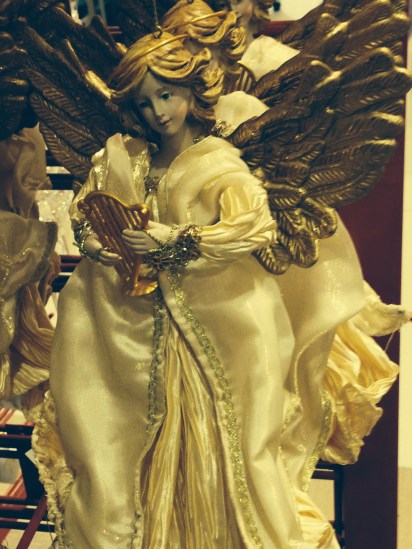 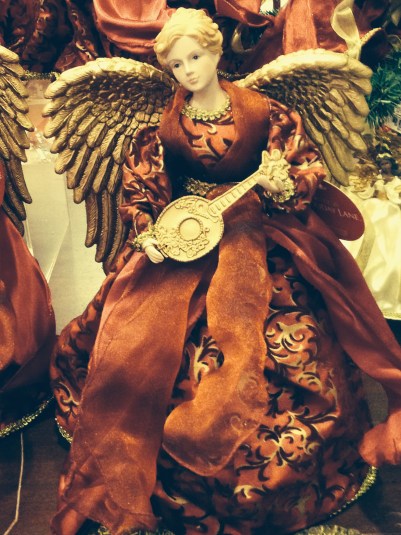