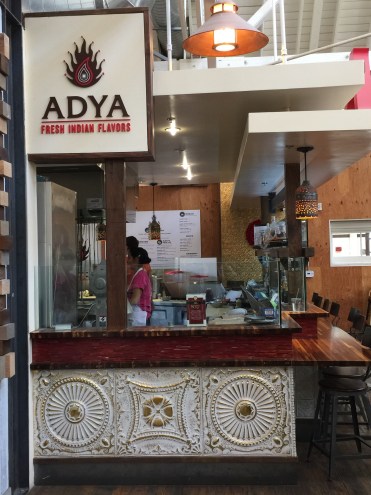 Several decades back, my partner and I lived in a small rural village near Hamilton, Ontario. One snowy afternoon as I drove through the village, I had one of those out-of-the-blue moments in which an unusual question popped into my head. “What is Indian food like?” As I pondered the question I happen to pass the local library.  I decided to stop and probe through the card catalogue, personal computers let alone Google lay far in the future, to see if I could find an answer. At the least, I could peruse Britannica’s info on the sub-continent’s cuisine.

When a cookbook of Indian recipes appeared on an index card, I knew karma had to be in play. I scuttled back among the dusty shelves where Classic Cooking from India by Dharam Jit Singh laid waiting. Published years earlier with the help of McCall’s Magazine, I had found one of the first cookbooks on Indian food to be published in the west.

I picked it up, took it to the desk, checked it out and took it home. With its help I assembled my first vegetable biryani, not difficult, but a complex dish. Preparing Indian food, like any craft, takes practice and after the initial dish I spent months doing just that.  Pickles, chutneys, curries, breads; I even made paneer. What I discovered is that Indian cuisine is highly developed, but not intricate. Preparing a festive meal is easy, but there are so many layers and processes that it can take several days.

Self-taught with help from the borrowed cookbook and a little advice from Indian friends, I gradually grew adept. I liked the quality of my food, and, to my astonishment, so did my Indian friends.  For the most part, I stopped frequenting Indian restaurants.

Until I met Chef Shachi Mehra. 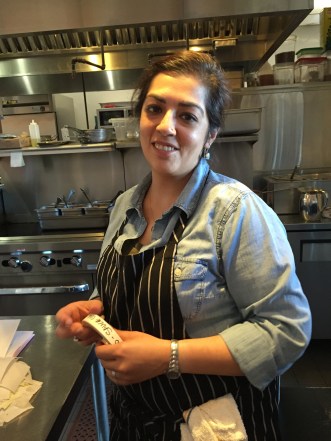 Born in India while her parents were visiting, raised in Jersey with a few years in Delhi, attended college, and then the day came when Chef Bruce Johnson (a premier chef according to the New York Times) invited her to spend a day prepping in his kitchen at Trap Rock Brewery in New Jersey. At the end of the day she had found her destiny; offered a job on the spot, her path to becoming Chef Shachi began. She would do stints at  prestigious dining establishments, Tablas and Bread Bar in Manhattan, Bombay Club in Washington, DC, Boconova in Oakland,  Junnoon in Palo Alto among them. She would do a culinary tour through India, Japan and Australia.  Gentry Magazine named her a rising star. But,  moving to the OC brought the opportunity to open her own restaurant, Adya.

When I followed the advice of a friend and tried her food (she was getting great press) I tasted some of the finest Indian dishes I had had in the US. Like Salgado at Taco Maria, Mehra is among the recent generation of chefs who are bringing together the dual heritage of a root food with their background in the US, and in Chef Shachi’s case, abroad. Let it be said that ethnic food prepared in the US may reflect subtle differences from that prepared in the mother country. Ingredients, unless they are imported, come from different climates and soils. Like a chardonnay from California differs from a French chardonnay so too a dish from India may differ from one prepared in the US. It may be likened to a twin, but whether identical or fraternal is the question. A person of Indian origin is often referred to as a PIO. Though I have never heard it as such, I like the name FIO (food of Indian origin) cuisine. Mehra comes down on both sides of the world. Her food made with fresh, local ingredients is comfortable for any palate.

I love Adya’s digs in The Anaheim Packing District. Back in the day when the OC was a rural stage for citrus crops, farmers brought their fruit to the big warehouse by the railroad tracks in Anaheim. Here workers for Sunkist washed, dried, wrapped and loaded fruit on trains headed to destinations throughout the US. Adya’s location has always been a food center of sorts, but now it reminds me of the grand markets of Asia and Europe. The fact that it is ten minutes from Disneyland serves well. 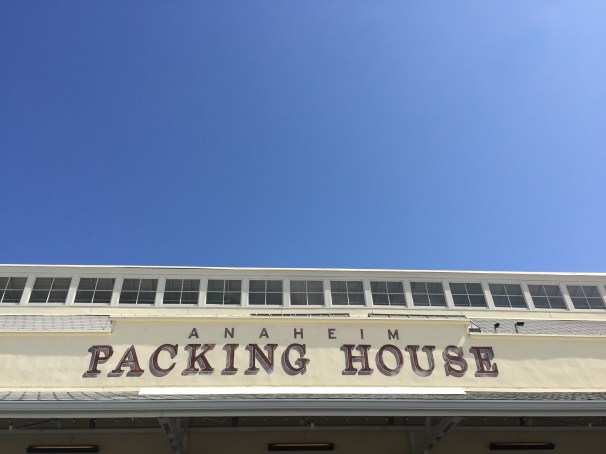 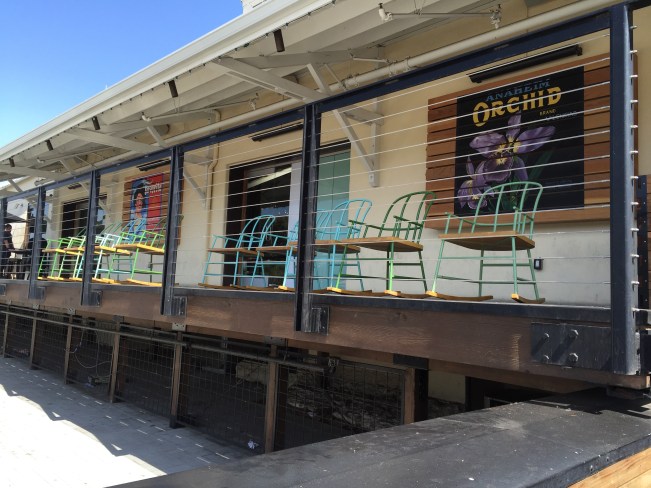 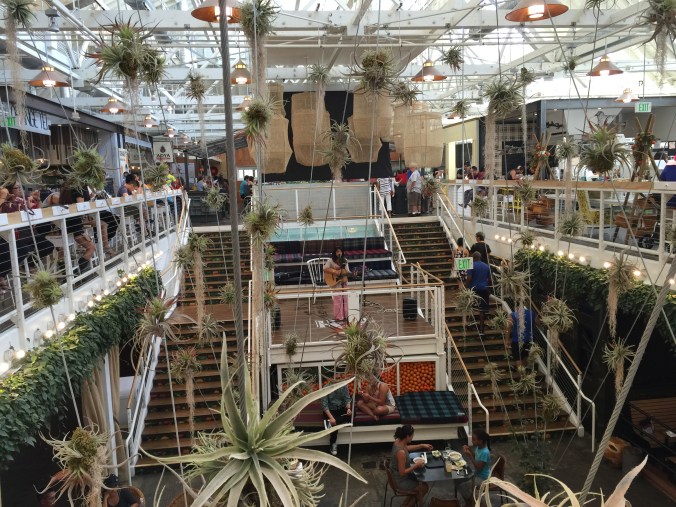 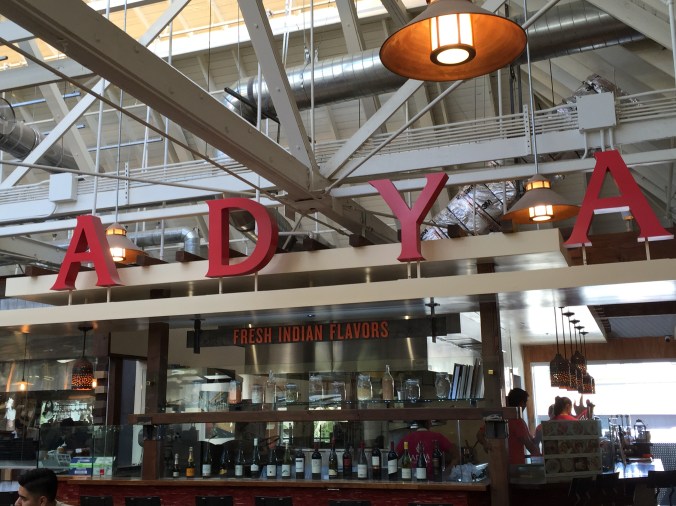 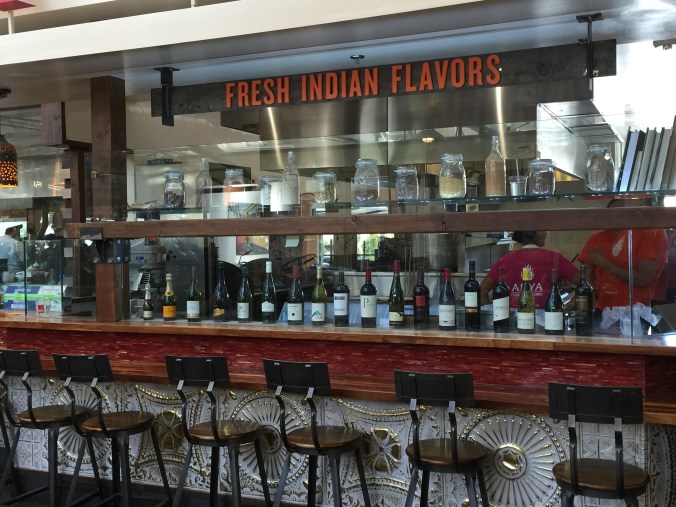 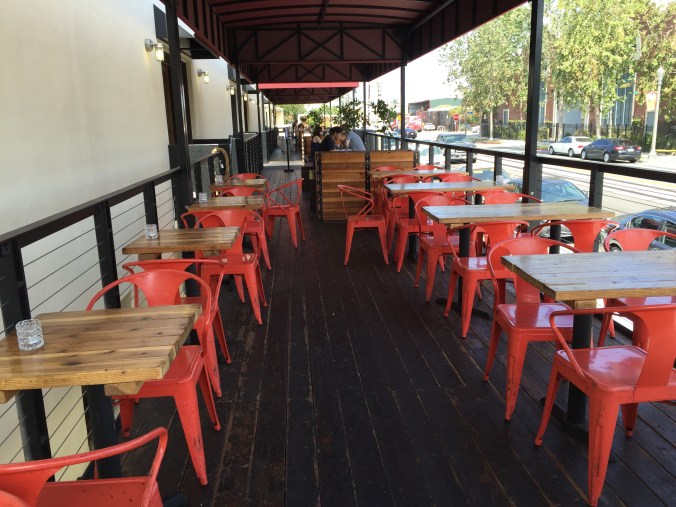 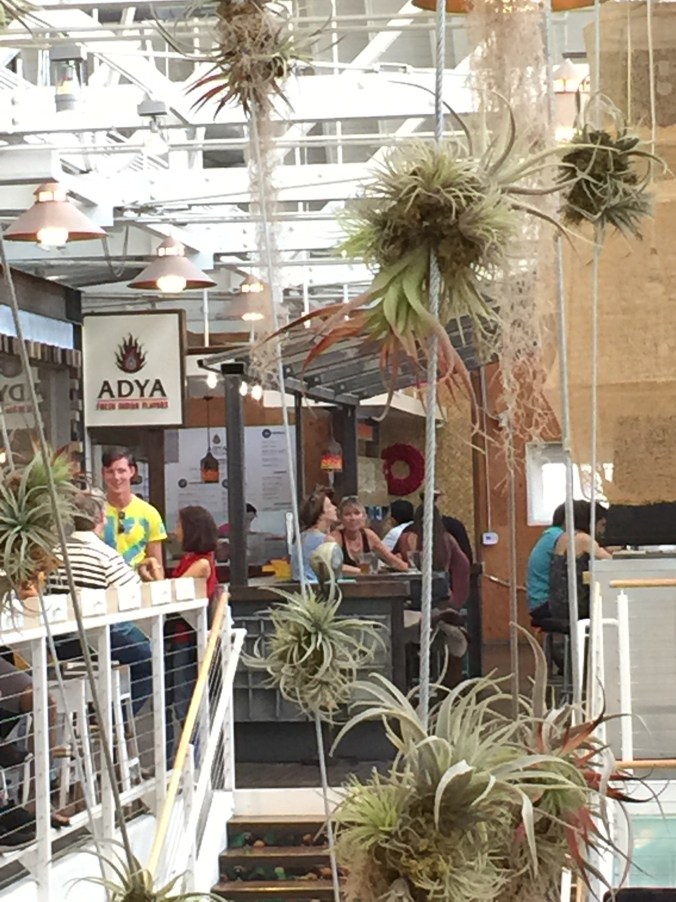 In Classic Cooking, Singh said, “If you would be a king, they say in India, you must eat like a king.”  Mehra’s Indian street food, tandoori’s and curries, fresh and imbued with the rich line of spices with which we identify Indian food are fit for a king and queen! I never cease to enjoy observing the cooks preparing food in the tandoori ovens, or the chef tinkering over simmering pots on the large stove tops. 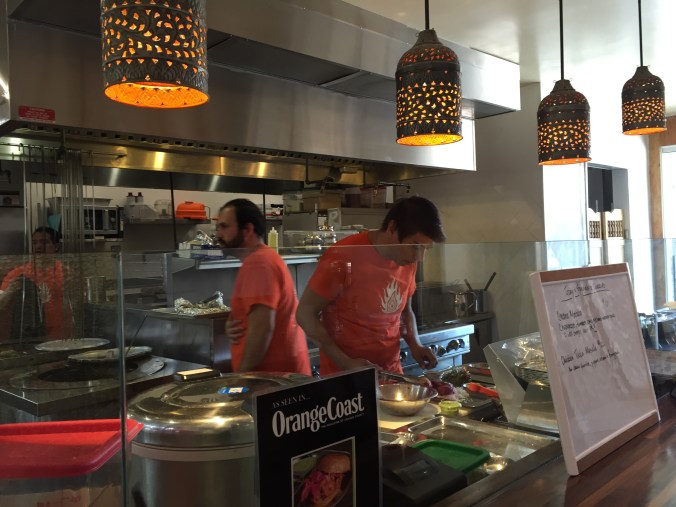 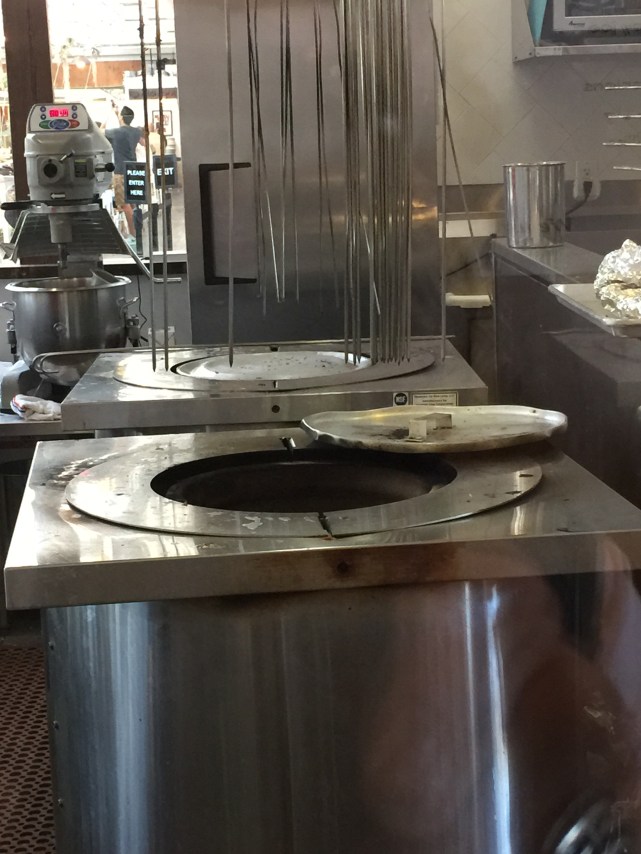 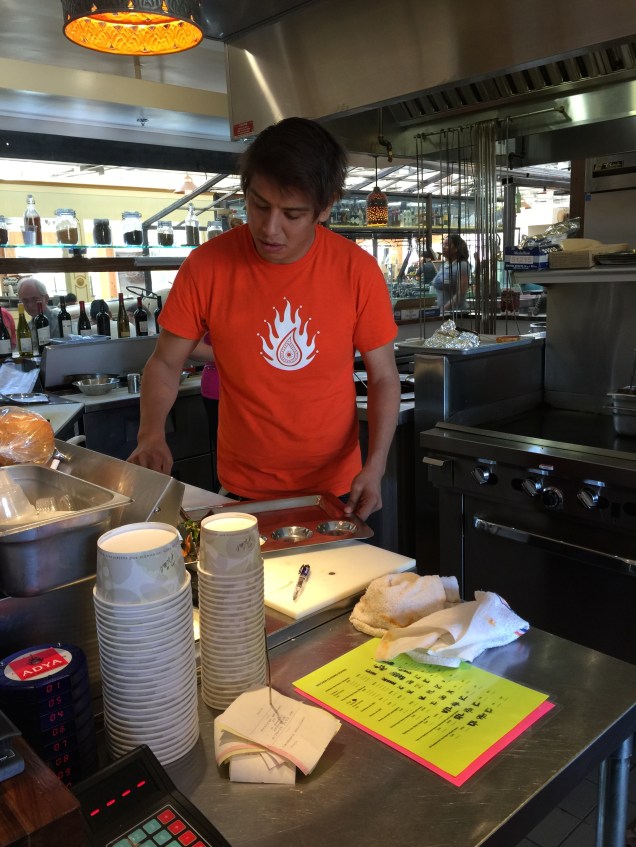 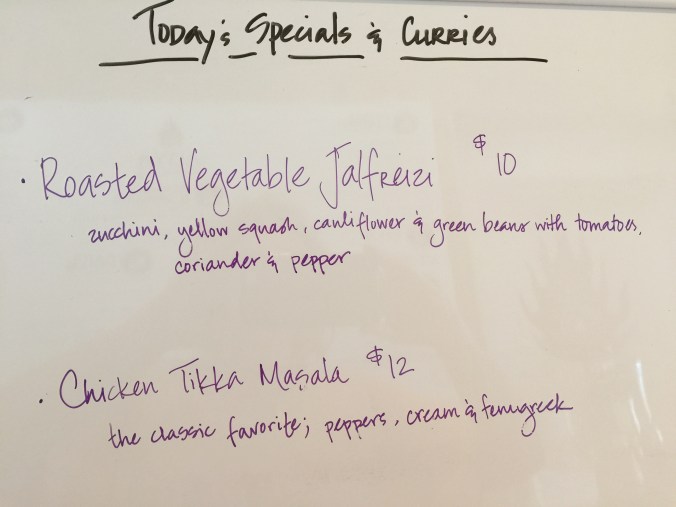 Served on the classic thali with naan, raita, dal and salad 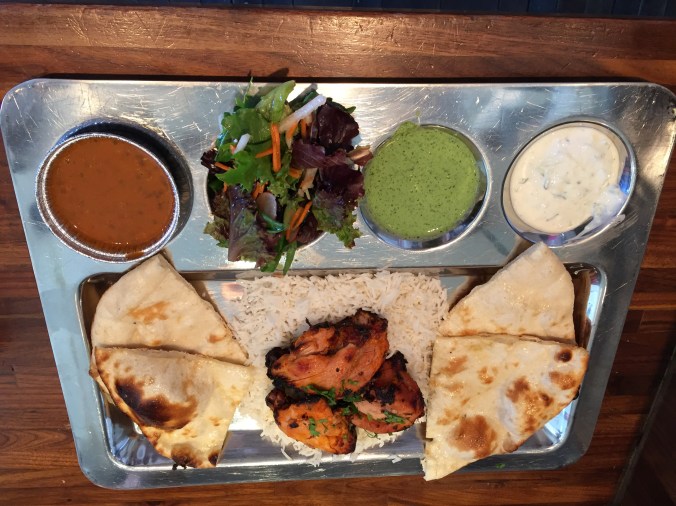 Two of my personal favorites watermelon chat (appetizer) complemented with fennel, red onion and lime and radish, mango, and jicama served on a papadom. 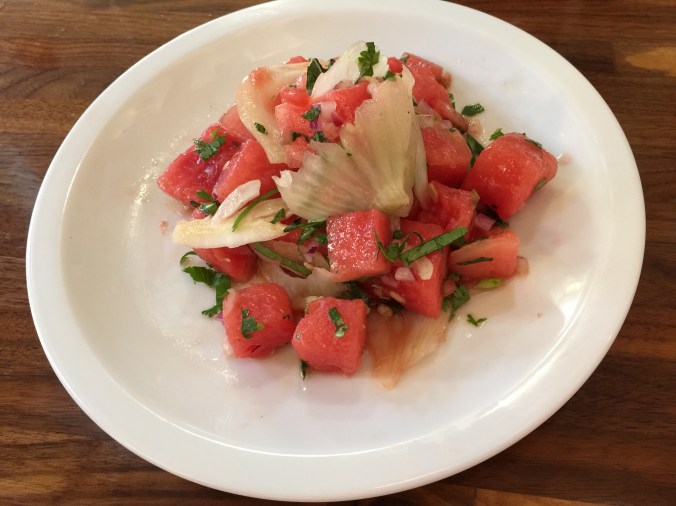 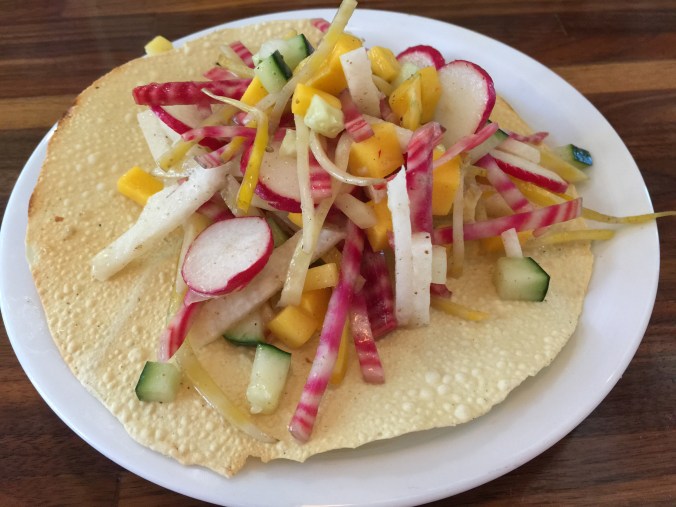 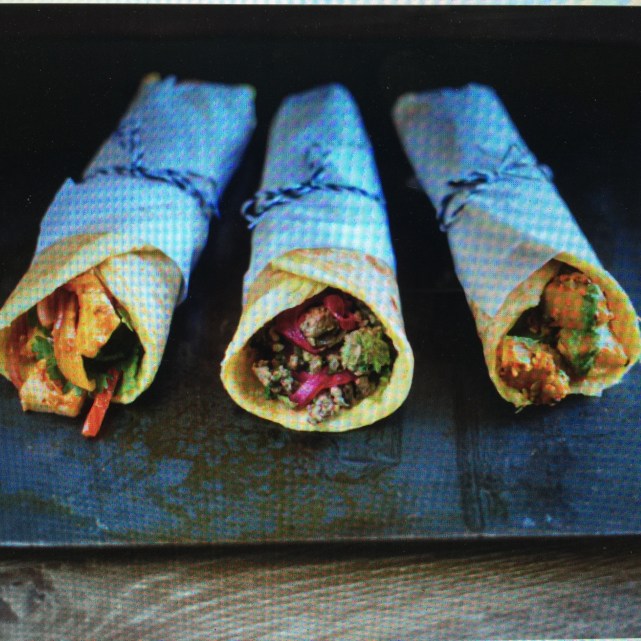 According to Pitaru a web site that explains the meaning of Hindu names, “Adya” a Sanskrit word, means “the original power from which all five senses originated.” It is said that Sanskrit not only names, but that the meaning of what it names is in the sound of the spoken word itself. Om, the example par excellence. If I repeat Ad…Ya slowly over and over, the vibration goes to my palate and down the throat. Soon, I am hungry. Time to head to my Indian go-to!