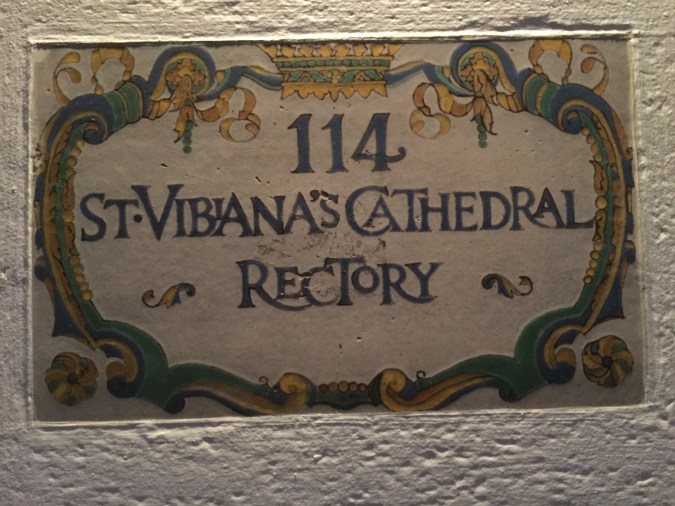 A week ago I dined in a rectory. Yes, a parsonage, a vicarage, the home of an ecclesiastical rector. No rector was present, but I could feel a presence. So how did the rectory of St. Vibiana’s Cathedral in downtown LA come to be a restaurant?

Recently Francis, the Pope, encouraged religious institutions that if they owned buildings no longer in use (former seminaries and convents among them) to make them available for people in need. The Sisters of St Joseph of Orange, California are an example of those who are doing just that. With declining vocations to the order, they have converted a former living space for the nuns into a center for transiting mothers in need of a place where they can be with their children. Jesus, Mary and Joseph, thank you!

Many former churches no longer in use due to declining populations are being sold and renovated for other purposes. I spoke about this in my posts on Pittsburgh last fall. St. Vibiana’s Cathedral founded in 1896 followed a different route than the above to becoming what it is today, but none-the-less, it is an example of a deconsecrated former cathedral undergoing conversion.

With the damage it sustained in the 1994 Northridge earthquake, the Church fathers wanted to tear it down and rebuild. Preservationists wanting to save the historical building rose up in protest. After long negotiations, an agreement was reached in which the city of Los Angeles traded the cathedral site for another larger plot of land on which the new Cathedral of Our Lady of Angels, name much more appropriate for the city of angels, would be built. After the exchange, the city sold the historic buildings to a developer. Before long the cathedral building became an event venue and an adjacent building a branch library for Little Tokyo.

The original Baroque inspired Italianate design left intact, the old rectory turned restaurant opened six months ago with popular Angeleno Chef Neal Fraser of the former Grace restaurant at the helm.  As I entered the renovated space, I had a feeling I get when walking through an old European church or cathedral.  Quiet. In spite of the presence of diners chatting, the sound of glasses clinking and the workings of  staff, an underlying silence enveloped the dining room. The kind of silence perhaps unbeknown to the diners, but one that evolves when a place has long been the site of ancient rituals; the kind of silence that allows for a full dining experience 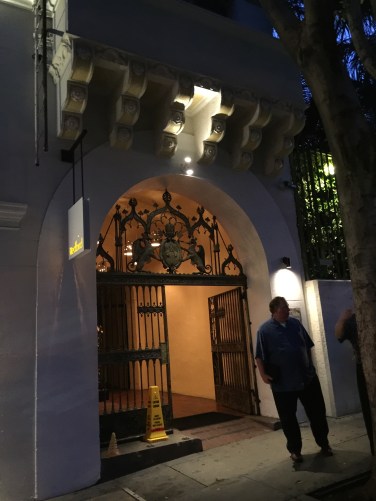 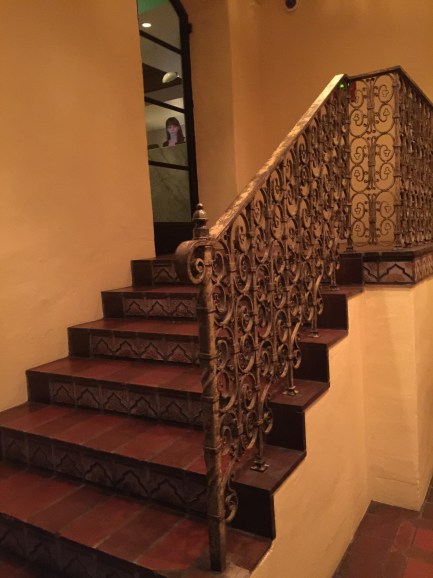 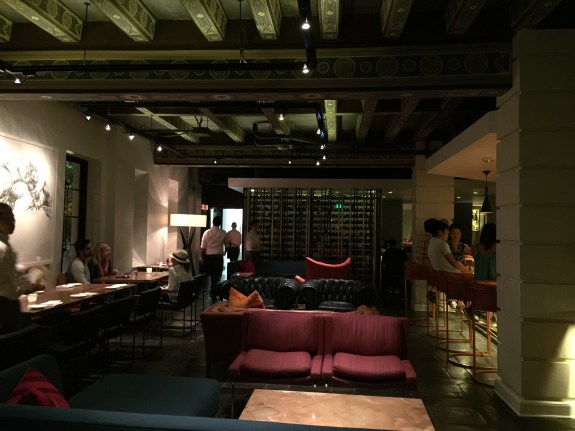 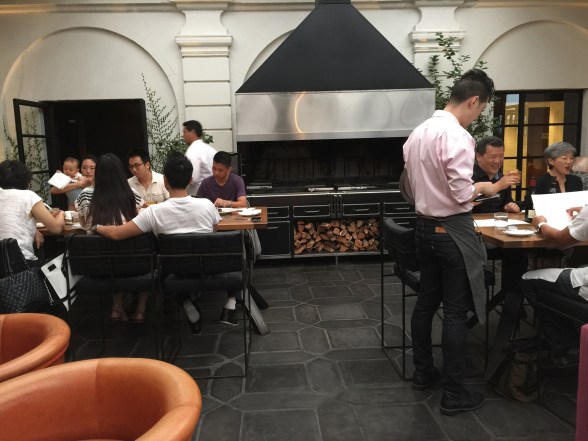 I was intrigued by the name: Redbird. 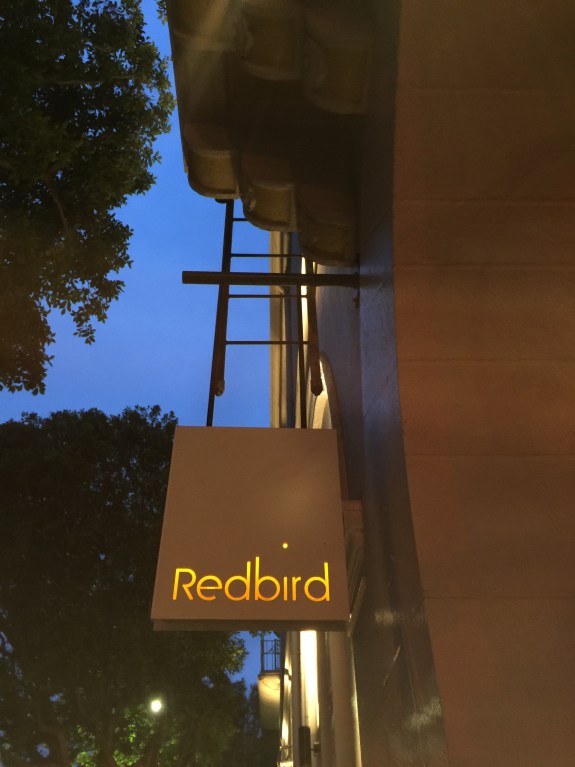 As I walked through whitewashed corridors off the main dining room and sensed the presence of former cardinals as they padded about, a sudden thought occurred to me. Redbird must have been named in honor of the red-robed, red beak-hatted cardinals who had lived in the rectory since 1876. Even the design of the comfy, padded bar stools reminded me of a bishop’s chair. With a bit of research, my a-ha hit was confirmed. 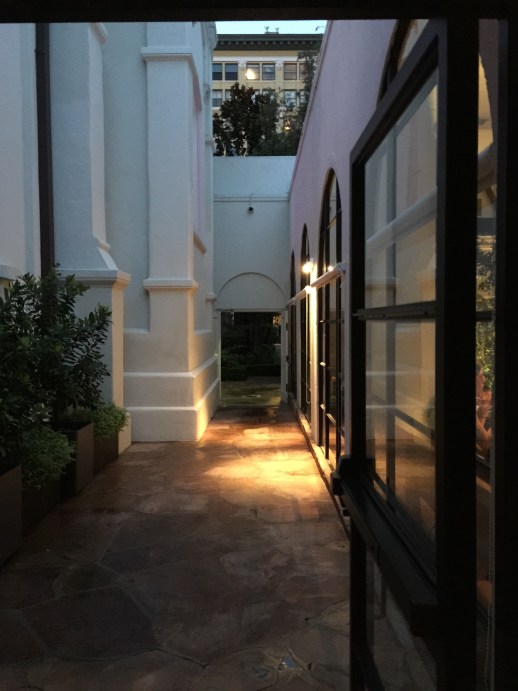 The restaurant is evenly divided into a dark, bar-lounge area on one side and a bright courtyard dining room also with bar and retractable roof on the other. I am told although I did not see it, it was raining, that the old church bell tower can be seen through the retractable roof. 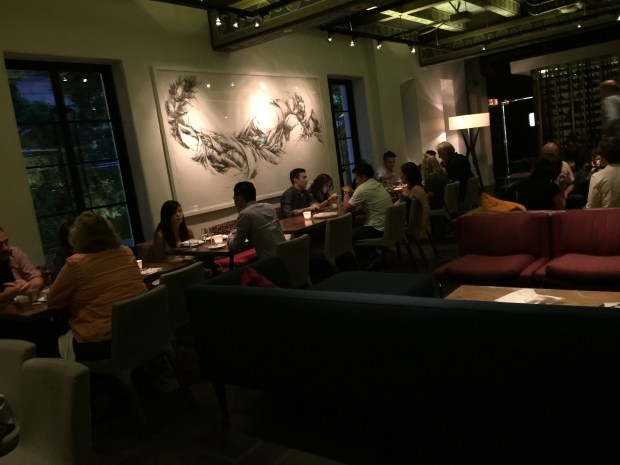 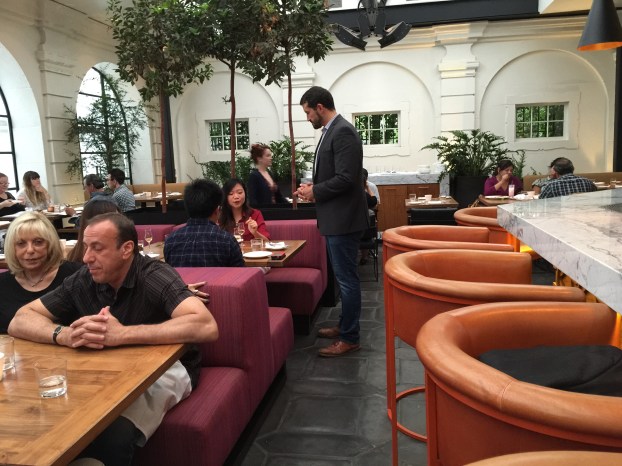 My partner and I settled into the stools and began to peruse the menu. Arranged in four columns with one to four stars over each column, with the number of stars indicating the size of a dish. A one * indicated appetizers, a four * large entre-size dishes.

When I noted New Zealand snapper, Spanish octopus, Maine lobster, Cape May Tilefish, Wisconsin veal, Colorado beef on the menu, my inner slow foodie slowly rose up in silent protest. A carefully thought-out creative menu, but how I want to see more local in the columns. I have seen other restaurants open, menu loaded with imports only to change to local later. I hope this will be the case with Redbird.

On the other hand, I am told that a vegetable and herb garden is being developed  using recycled water from the bar and kitchen.

For a starter, we ordered the heirloom tomatoes under the one *ed column. 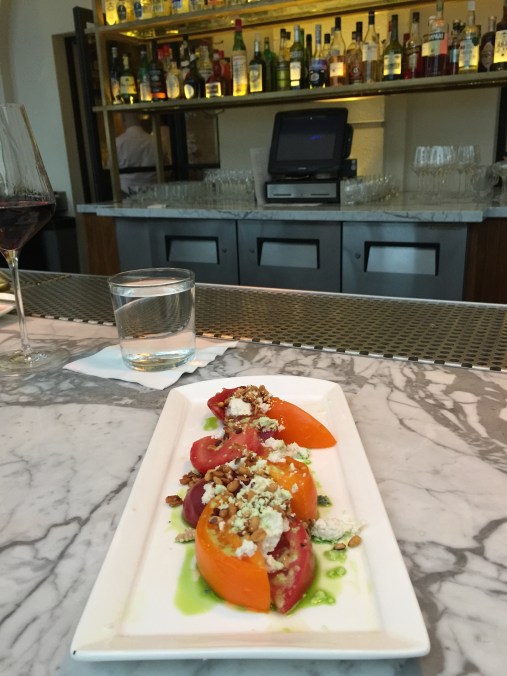 The oval plated salad was more than enough for two to share. Bright red and yellow wedges of carefully quartered tomatoes shared the plate with dabs of almond ricotta, sprinkled with pine nut granola and lightly bathed in basil oil. The almond ricotta, denser than its fraternal twin made with cheese, created a textural balance to the juicy wedges. Crisply roasted pine nut granola added the final touch that balanced sweetness, acidity, texture and appearance.

I was happy to see that the melons listed under the two *ed column our second choice, were from the Weisers. The Weisers, running bio-diverse family farms in the Bakersfield area, Tehachapi and the Lucerne Valley, are dedicated to applying sustainable farming techniques with vegetables and fruits supplied to chefs at their peak. Alex Weiser was awarded the 2015 Tom Haller Award that is given to individuals who have made a significant impact on the farming and agriculture industry in the State of California by the Board of Directors of California Small Farms.

Medium sized pieces of jewel-like melons arranged with burrata and mandolin thin slices of duck prosciutto romped in a Riesling vinaigrette. Firm from marinating in their own juices, they popped the palate with miniature explosions of creamy sweetness. 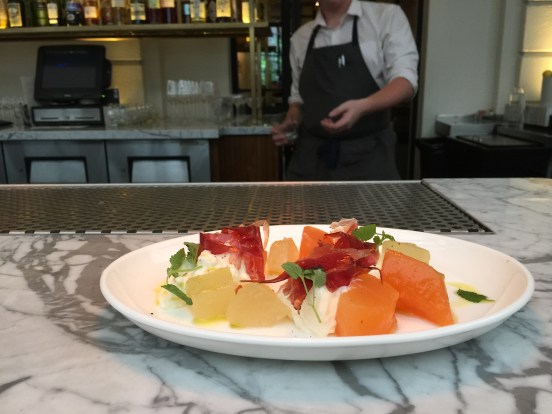 My partner ordered the braised goat gemelli and paired it with a glass of Corvina, Rondinella & Molinara, Fraccaroli, Ripasso, from Vallpolicella, Italy. 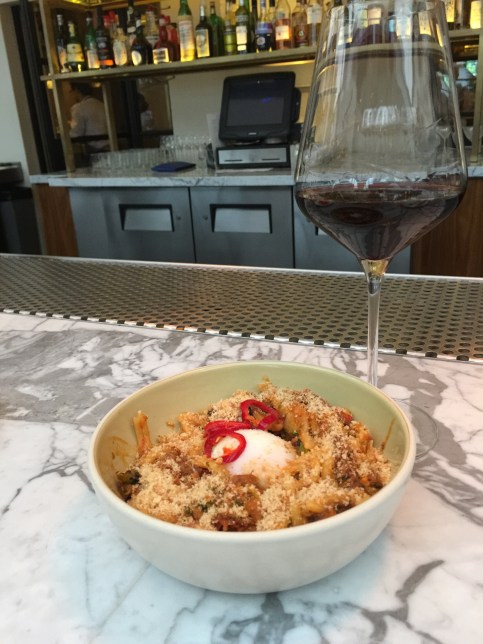 Goat (along with rabbit, frog legs and escargot) is reappearing after a long hiatus on menus outside of Mexican and Middle Eastern restaurants. Goat, the most consumed red meat in the world, is gradually making its way into the American diet.  It has fewer calories and higher levels of iron than beef, lamb, pork or chicken, a lower fat content including less saturated fat and a lower cholesterol level.  For more information on its health benefits, check out Goat: Meat, Milk and Cheese by Weinstein and Scarbrough.

Gemelli, the Italian word for twins is a single s shaped strand pasta twisted into a spiral and ideally structured to accommodate chunks of sauced goat. Mixed with a velvet rapini and poached egg, the garlic breadcrumbs gave the final crunch to a perfectly composed pasta.

My choice was smoked tofu. 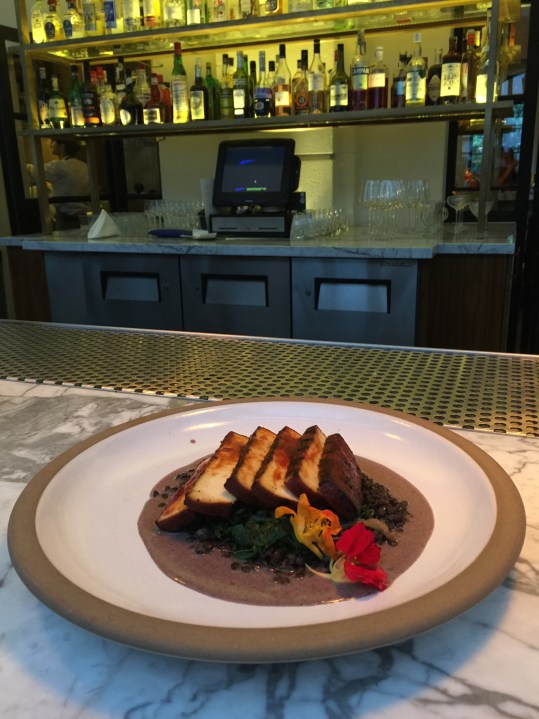 During the revolution of the sixties, new vegetarian restaurants offered thick slabs of tasteless tofu often smothered in a heavy sauce. The tradition continued on until recently when chefs began to develop more creative approaches to tofu. No doubt, Japanese influence! Redbird’s is definitely not your grandmother’s tofu. The smoky rim of the slices offered a deeply satisfying flavor that complemented the creamy interior. The bed of beluga lentils under the tofu blended well as did the soft, but chewy chard.

We tried  the shishitos only because Chickie, the woman sitting next to me offered me one. Not much heat emanating, it’s still early in shishito season, the bottarga and crispy quinoa added a nice contrast to the chewy peppers. 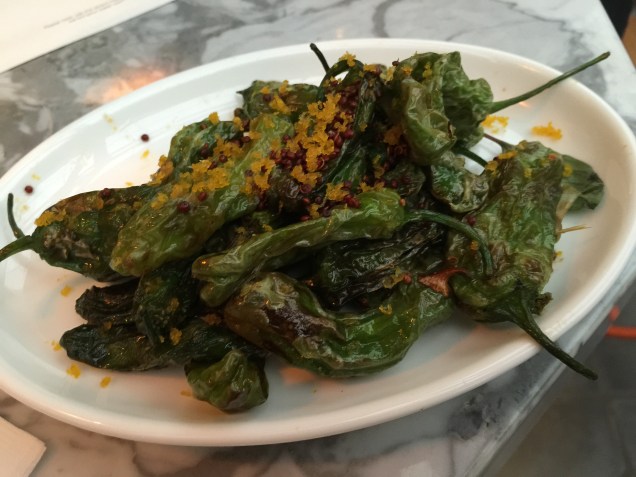 Theo took care of our every whim. In a word, that means great service! 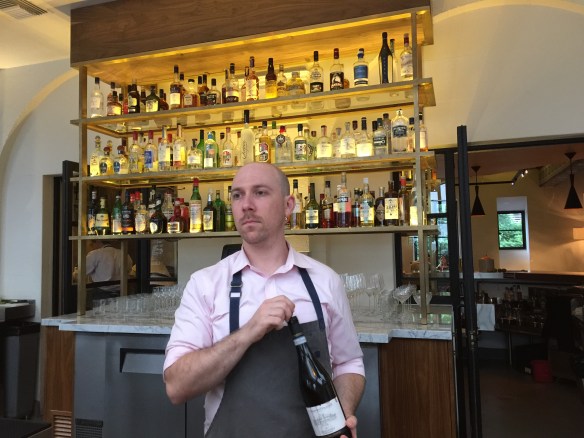 Worth a try! That’s it folks. Redbird not a go-to yet, this was my first forage, but I will go back and soon.

And last night when a surprise opportunity presented itself, I did just that.

Happy for the second go-round. The weather better than the first; the retractable window was open giving an outdoor patio ambience to dining. Wow, what a way to go outdoor dining. 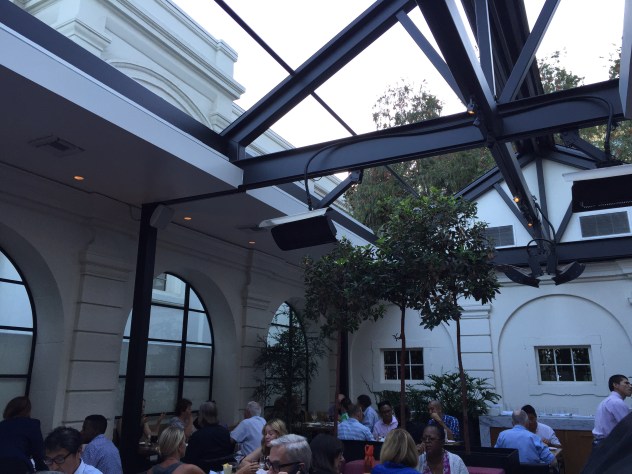 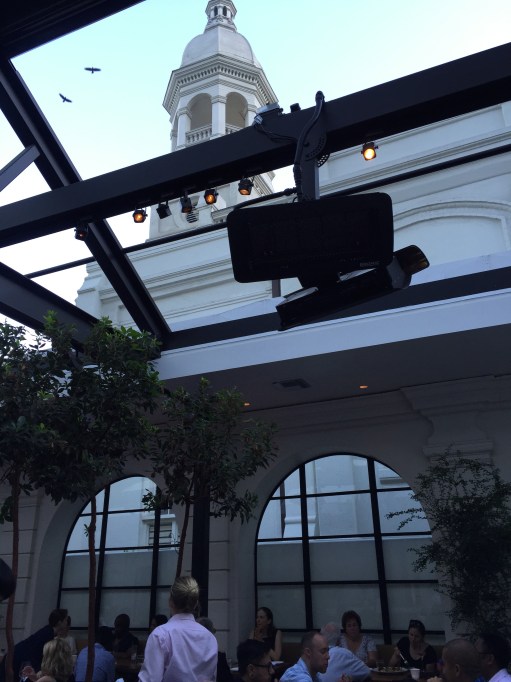 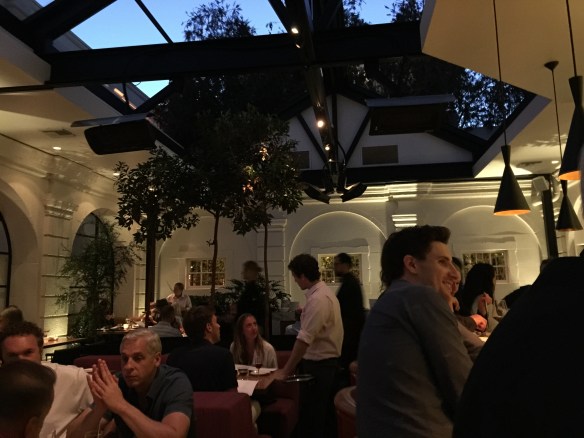 As darkness descended, the moon arrived. 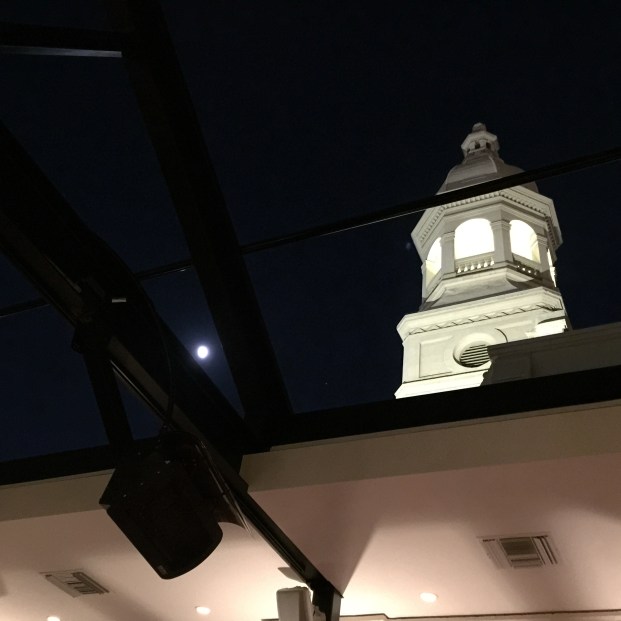 The New Zealand tai snapper (actually, a pink sea bream or porgy) crudo with yuzo, shiso, lemons and California olive oil, won our approval as a light, delicate starter. I wonder what impact the long flight had on the texture. In any case, I’m such a sucker for yuzo; I planted a tree in my backyard in Davis. 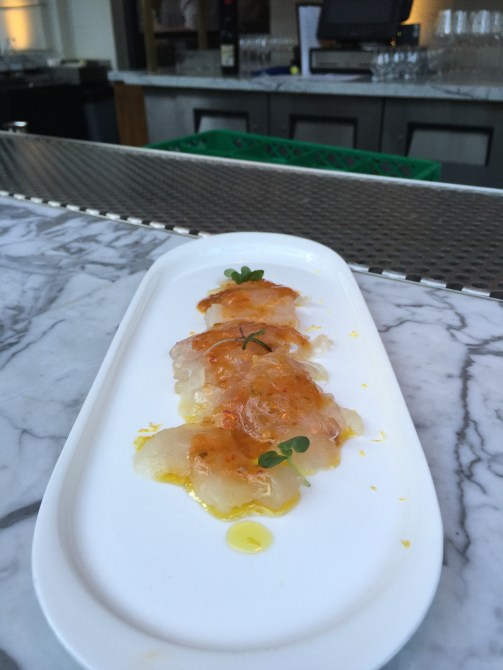 We followed with the avocado salad, a binary misnomer. A cross between a wedge and a Caesar done with romaine, bacon bits, buttermilk blue cheese vinaigrette, the avocados seemed an after-thought. Lettuce dominated, that’s ok, but please don’t call it an insalata avocado. 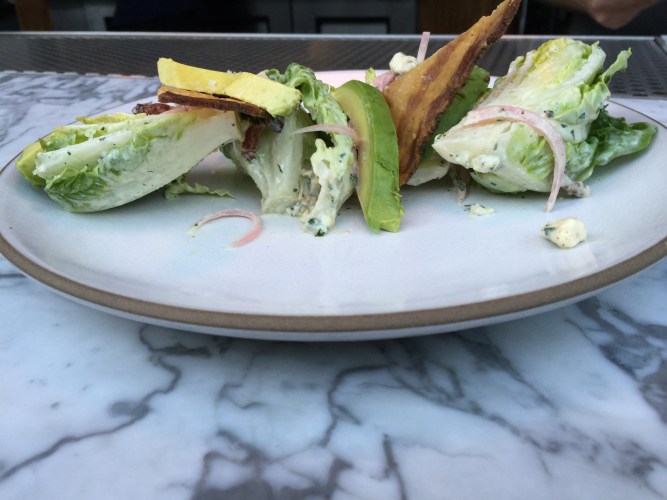 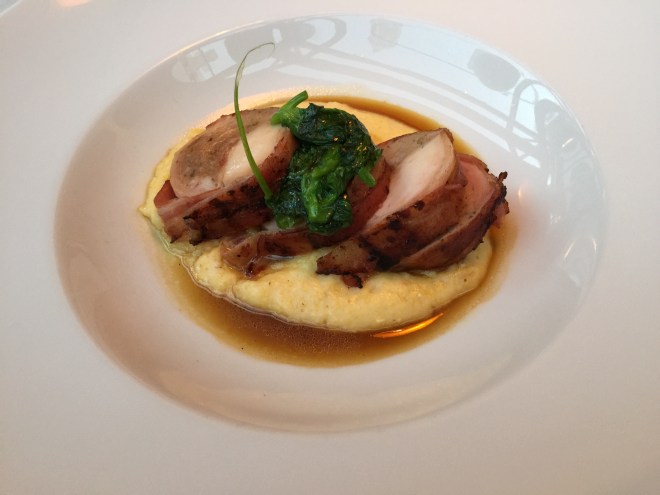 Finally, my partner ordered the rabbitchetta. Last January, Zagat listed Fraser’s rabbit as one of the top five rabbit dishes to try in LA. He makes “a sausage, stuffs it in the saddle and wraps it in a thin piece of apple smoked bacon,”  floats it on a bed of Anson mills polenta bathed in thyme sauce and tops it with pea tendrils.  To the eye, it comes off and texturally has the feel of a miniature, tender turkey roulade minus the stuffing. The arrangement of dark, white meat reminded me of the symbol for yin and yang.

My partner and I, with the history of farming in our family backgrounds, grew up eating rabbit; then rabbit seemed to disappear. Currently coming out of a long demise, it is starting to appear on menus up and down the state of California. Like goat to beef, rabbit is a very healthy alternative to say chicken and can do a lot for the waistline of flesh eaters.

In conclusion, Redbird builds on the past; the “avocado” salad with allusions to Caesar and wedge as a prime example, and while I did not try porterhouse, day scallops, veal among others, done thoughtfully and with a creative approach to combined ingredients, the traditionalist as well as the progressive diner will find satisfaction.

Will I go back? Occasionally, but only because I need more veggie options, not because of fault with the food. 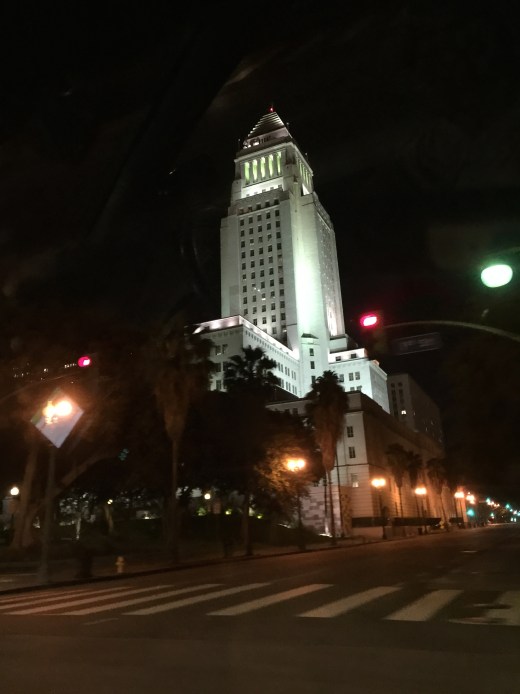