Sunday morning in Saigon. Got up early, did the morning rituals and headed down the street to our new favorite French Boulangerie. Closed. Back to the hotel, research on I-phone. Now at the Id a block from the hotel and my new favorite coffee house in all of Viet.  In its upstairs room full of comfy sofas, beautifully appointed Christmas tree out of bamboo stalks, soft western music with Asian overtones, lots of hip young locals, freshly brewed Vietnamese style coffee-beans from the central highlands, sitting here at my computer, what a way to spend Sunday morning.

Here, it is celebrated this on the 22nd.  I did mine on the Mekong Delta. After three days of Ho Chi Minh’s revenge, I was purified and ready for what the day would present. I am impressed that I have never been sick in my world travels, not even once in the year that I lived in India. I had to wait for Saigon in order to have this blessing.

Grace and her driver picked us up at 9 am at the Lavender. One of the beautiful things about Grace and there are many more, is that she is a deeply flexible being. When she told me of her life, I understood why. Grace is a name for tourists, not the real. Ten minutes out of the gate we completely rerouted the day from the original intention of heading straight to the boat on the delta. First, we would go to the Cao Dai Temple near the city of Mekong.

In my research on temples the Cao Dai came up several times. As I searched deeper more information revealed itself and I discovered that the Cao Dai was far more than a temple. Caodaiism a fairly new tradition is focused on the worldwide union of religions. Although a  lifelong student of spiritual traditions, I had never come across this one in my studies or research. Victor Hugo, the French writer, Sun Yat Sen, leader of the Chinese revolution in 1911, and Nguyen Binh Khien Vietnam’s first poet laureate born in 1492, are referred to its three leading saints. The first two were disciples of Nguyen. 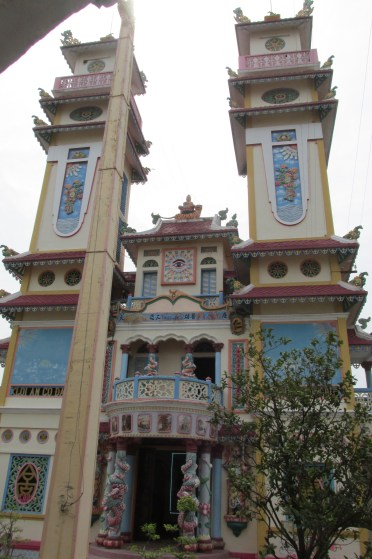 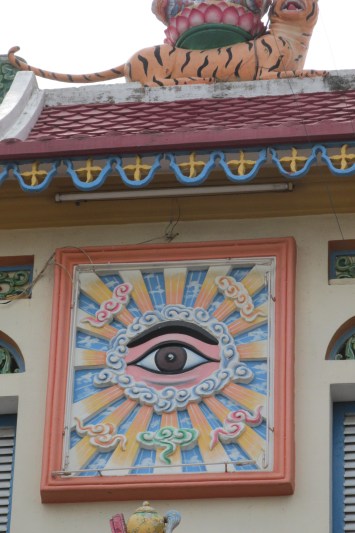 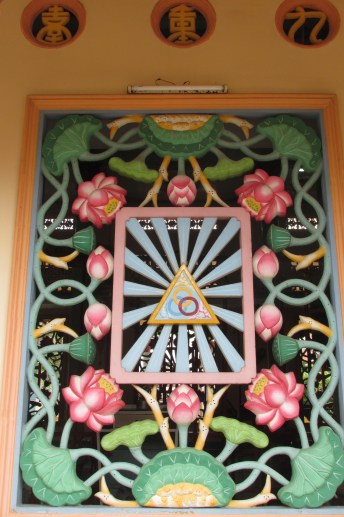 We arrived at the temple at noon in time for the Mass that is held daily every six hours. A simple service of chanting, forty five minutes for the living followed by another forty-five for the dead. The members all dressed in white knelt on small pillows evenly spaced on the marble floor; spectators stood upstairs in the balcony. Taken by the simple melodious sounds and over tones I experienced unbounded wholeness, space and solitude. A moment focused on the stability of the impermanent. 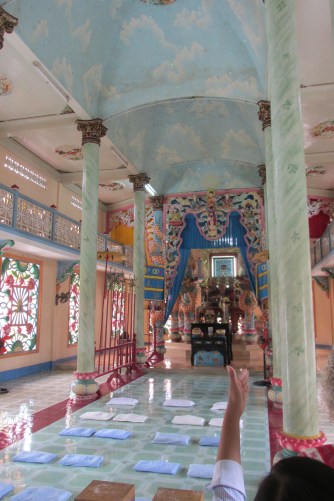 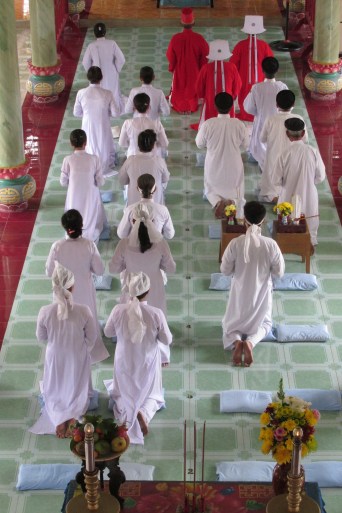 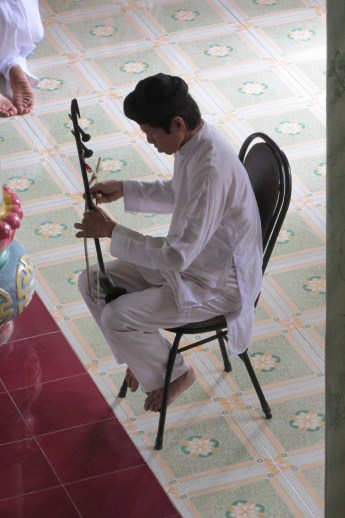 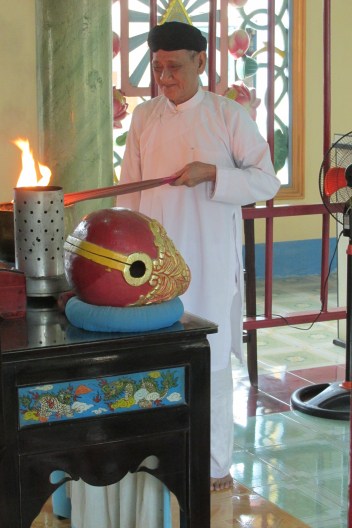 After a while, we withdrew quietly, returned to our brand new Toyota SUV and rode in silence to our next destination.

Grace grew up on the delta.  As we made our way through the day she revealed her story. Her grandparents were wealthy because “they had only two sons instead of nine children, but when the communists came, their wealth was taken and they became quite poor.” Later, after Grace’s father died she along with her mother, sister and brother moved into Saigon. “My older sister became a nun and remained in a monastery in the home village.” She attended the large university in the Mekong and majored in English.  As an aside, I have seen posters here that advertise English as “your gate to the future.” After graduating she went into teaching, but with an eye to restoring the family wealth, went back to school to prepare to work in tourism. On passing her exams she became a tour guide. According to Grace, “there is an old saying in Vietnam, you cannot be poor for more than three generations, and you cannot be rich for more than three generations.” True to yin/yang, Grace is mid-stream in reversing the flow.

Today, Grace is an independent guide working for several agencies with plans to form her own company. She lives with her mother, younger sister and brother about an hour west of the center (where we are staying) of Saigon. Drives into Saigon central daily on her scooter. Supports her sister the nun, the younger sister who just graduated from the university and her mother. When I asked if her brother helped out she responded, “No, as the son, he is free of that responsibility. It’s an unfair system, but when my younger sister gets her job, she will help out.”

On arriving in the City of Mekong, we hopped on board and sailed along the Mekong River stopping first at a combination home and fish farm, then a bee farm. Grace explained that there is a large dangerous bee native to Vietnam. During the American War the Vietcong cultivated that bee and trained it to kill Americans.

After a demonstration and tasting of sweets made with  honey we walked along a path through local homes and into a large open café. Local musicians performed traditional music for us. Touristy, somewhat, but real and true to the ordinary culture of the Mekong. I was happy.

Before we left the Mekong Grace took us to the local market where she had shopped as a child. Then we drove to one of the most magnificent Buddhist Temples I have seen in all of Asia. The photos speak for themselves.

Wikipedia refreshed my growing-age memory on some of the details of Buddhism in Vietnam. One of the things that I note is that the populace does not identify with particular schools of Buddhism as American Christians would identify with specific Churches. Also, they merge their beliefs and practices with the indigenous traditions. In addition to Buddhism, the country is fifteen percent Catholic. When I asked Grace about her upbringing she related that her mother was Catholic and her father Buddhist, so “I am both.” 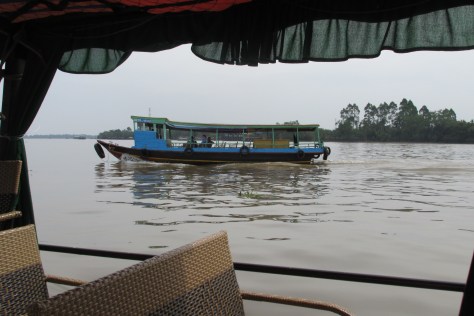 In the Mekong I find the Vietnam that has been riding in the back-roads of my imagination. A poor and simple life on the banana tree studded river living in floating houses and fish farms–beautiful. I could live here.

Spirituality, Travel: Boots on the Ground